Man, 26, whose severe acne and scars are like ‘something out of a horror film’ finally has them treated at The Bad Skin Clinic – after threatening to ‘cut them off with a knife’

A young man whose severe acne and scars are like ‘something out of a horror film’ has them injected, lasered and squeezed on The Bad Skin Clinic.

In tonight’s episode of the Quest Red show, Mitchell, 26, from the UK, who enjoys living an active lifestyle, tells how for the past six years, his life has been held by back a large spread of scarring on his shoulders and back.

Mitchell, who also suffers from autism, is at the end of his tether and wants the lumps removed – and even thought about cutting them off with a knife.

‘I’ve had the condition roughly for five to six years,’ he explains. ‘I’ve tried everything I can, it’s just got the point where I want them gone now.’ 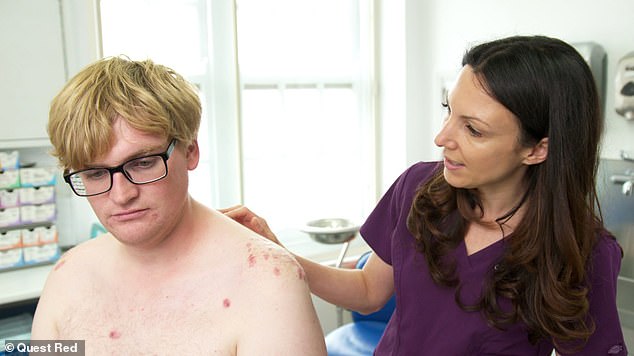 Mitchell, 26, from the UK, explains how his life has been held back by a large spread of scarring on his shoulders and back. Pictured, Mitchell after treatment 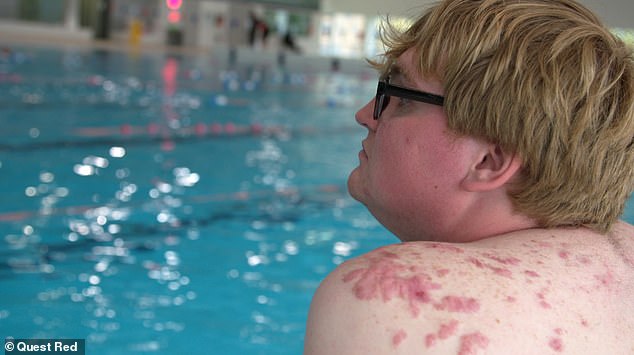 The 26-year-old admits he’s tried everything he can but just wants them gone. Pictured, Mitchell before treatment

The lumps on Mitchell’s back are red, raised and extremely tender, and Mitchell admits that he struggles with pain and the sight of them.

‘The amount of bumps on my shoulders, I’d say there are about 20-25,’ he says. ‘They’re very big, very grotesque, very red and swollen.’

‘They’re very painful to touch and very itchy. They often cause quite a lot of bleeding and scabbing which isn’t very nice. I’m definitely worried about them getting bigger and spreading.’

Donna, Mitchell’s mum, admits she was shocked when her son first revealed the lumps to her. 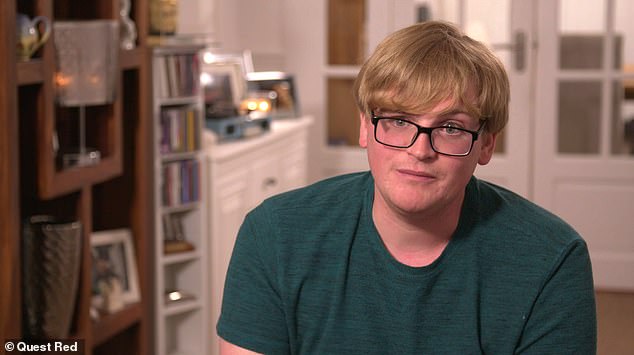 Mitchell (pictured), who also suffers with autism, had red, raised and extremely tender lumps all over his back – and he struggles with pain and the sight of them 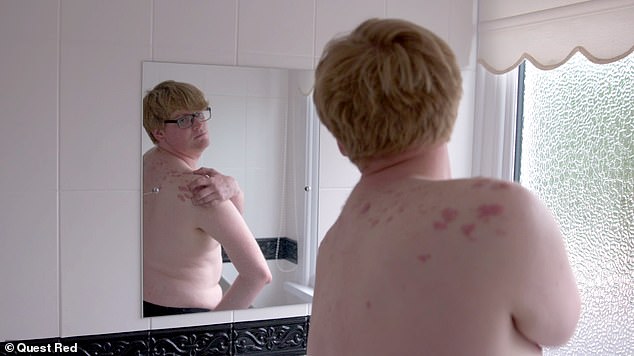 The active youngter says he has around 25 bumps on his shoulders. Pictured, Mitchell before treatment 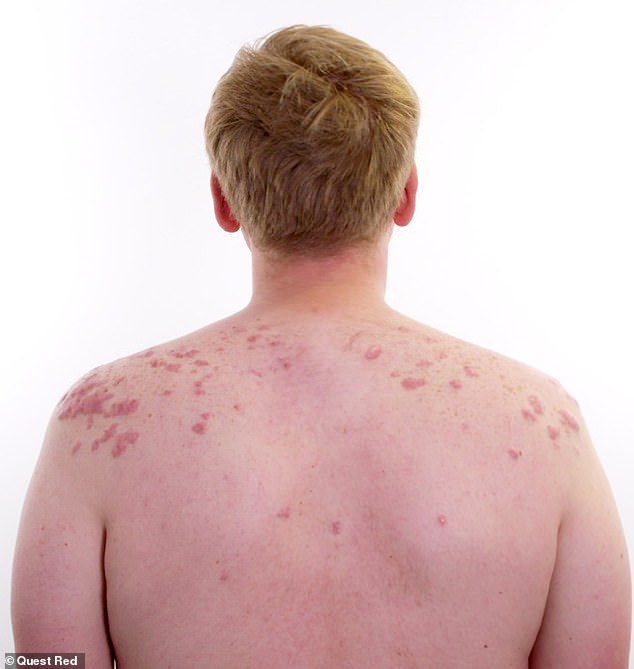 Mitchell’s mother Donna admits she did have a few tears when she first saw the lumps. Pictured, before treatment

‘When Mitchell was 16, he started getting these nasty lumps on his back,’ she explains. ‘We eventually went to the GP and they said it was acne.’

‘Then when he got to about 19, he was complaining that his back and the tops of his shoulders were really aching and hurting.’

‘He showed it to me and, I’ll be honest, I did have a few tears. It looked really horrible. It really does look like something out of a horror film.’

Socially, Mitchell constantly feels embarrassed about the lumps and they have even started to stop him doing the things he enjoys – such as swimming.

‘There was a time when I was at the swimming pool and a lifeguard came up to me,’ Mitchell says.

‘He kept asking me the same questions about my condition, whether it’s contagious or if can be spread to other people.’

‘It got so bad to the point where I was nearly in tears. There’s time where I’ve wanted to take a knife and cut it off myself.’ 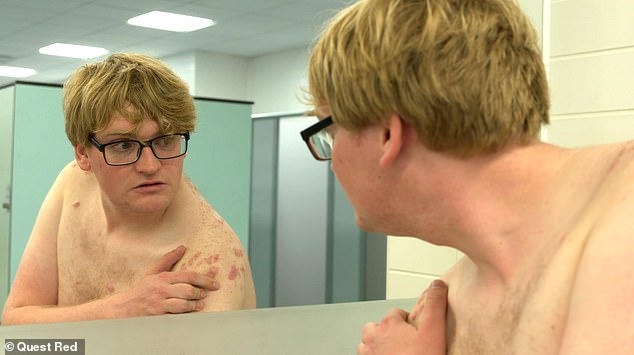 It got to the point where the lumps stopped Mitchell doing the things he enjoys – such as swimming. Pictured, before treatment 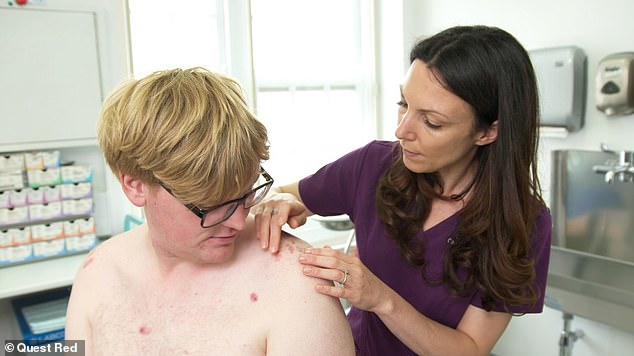 Mitchell visits Dr Emma Craythorne (pictured together) at 152 Harley Street to see if he can get the scars removed for good. Pictured, after treatment 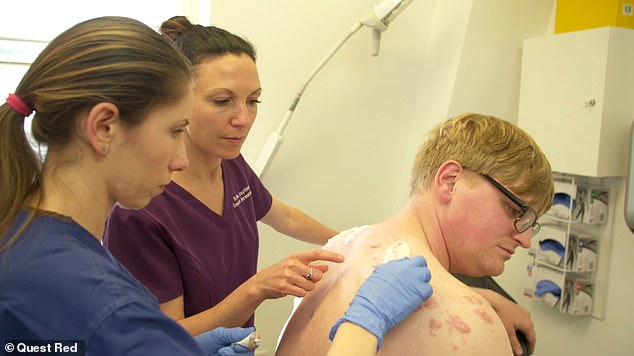 Dr Emma confirms the lumps are severe scarring caused by acne. Pictured, Mitchell during his treatment

Enough is enough for Mitchell, and he pays Dr Emma Craythorne a visit at 152 Harley Street to see if he can get the scars removed for good.

After inspecting the raised areas on his back carefully, the expert reveals the lumps are severe scarring caused by acne.

‘This is a pattern of acne scarring,’ she confirms. ‘You’ve got these acne scars that are raised, coming up off the surface of the skin, they’re firm, and they’re this reddy, almost pink colour. You do see this hypertrophic scarring as a consequence of acne.’

Dr Emma also tries to give a bit of context around Mitchell’s condition.

‘Things like movement will have an effect on the scars,’ she explains. ‘In your case, this has over-stimulated the healing process and you’ve ended up with these scars.’

Despite admitting that Mitchell’s condition is difficult to treat, Dr Emma offers a plan using a combination of lasers and a steroid to soften and reduce the areas – starting there and then.

A self-confessed ‘nerd’ about science, Mitchell is raring to go and admits she’s ‘very much looking forward to being lasered.’

After covering the affected area on Mitchell’s shoulders with cream, Dr Emma gets to work on lasering the lumps. 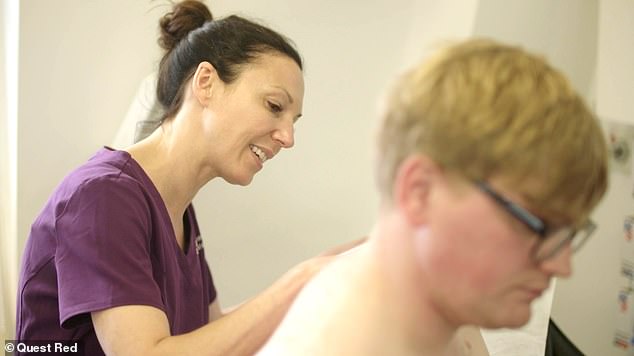 The expert (pictured left) uses a combination of lasers and a steroid to soften and reduce the areas. Pictured, Mitchell with Dr Emma during his treatment 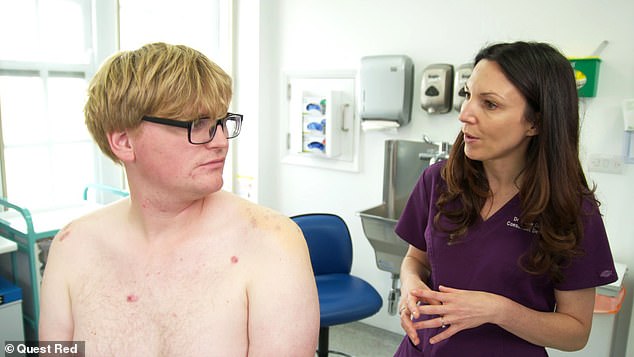 After just a few treatment sessions, Mitchell finds the lumps are a lot less severe. Pictured, after treatment

‘So this is just drilling little tiny holes into the scar tissue, shrinking it down and giving the normal collagen a chance to grow,’ she explains.

It’s a complicated procedure, and Dr Emma is forced to squeeze blood out of some of the holes in Mitchell’s skin. After the lasering, she injects the lumps with steroids.

‘Now Mitchell, I’m going to do something that you’re not going to like. I’m going to inject a couple of the bigger ones,’ Dr Emma says before praising his bravery.

After finishing up, Mitchell leaves the clinic feeling positive. Seven weeks later and after further treatment, he returns for a follow up session with Dr Emma.

After going through a couple of treatment sessions, the bumps are a lot less severe and Mitchell is thrilled with the results.

‘It’s not feeling as lumpy and bumpy as usual,’ he says. ‘To see it in just a few short months to go from what it was to this is very confidence boosting.’