A man who was left parlayed by motocross accident popped the question to his girlfriend with a tin can ring from his hospital bed.

Craig, from the South West of England, and his girlfriend Laura, won the title of the best proposal in the UK, after an events company started a search for the best one.

Laura stayed by his beside as he had surgery and then went into a coma after catching a chest infection and pneumonia. But when he was well enough he used tin can dishes to make a home made ring and popped the question.

Events company Red Seven leisure were inundated with stories for their competition.

And other finalists included partners that went all out with beach proposals, trips to New York to propose next to the famous Rockefeller Christmas tree and even one Navy seaman who proposed to his pregnant girlfriend after he was at sea for 8 months. 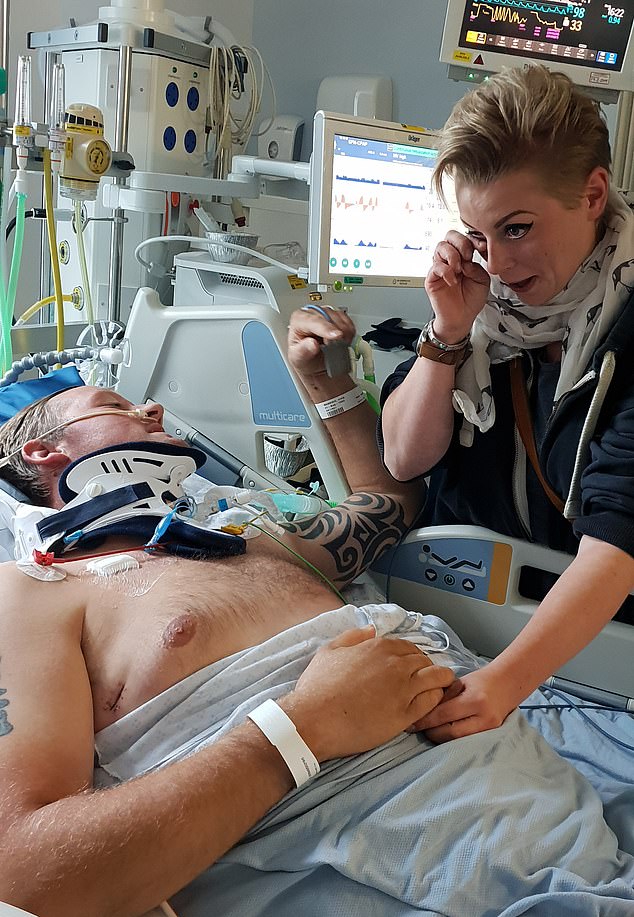 ‘I stayed by his bedside every second of every day. He woke from the coma but had a tracheotomy so I had to become quite the mouth reader,’ Laura admits.

‘One day Craig takes my hand and mouthed ‘I love you’, I said ‘I love you’ too then he mouthed ‘will you marry me’ and pulled a home made ring made from tin dishes from the hospital.

‘We are still early days in our new adventure but we are getting there. Craig is now out of rehab and has been back home.

‘Getting the big day booked isn’t our priority but we are using our wedding as our goal to get back on track!’ 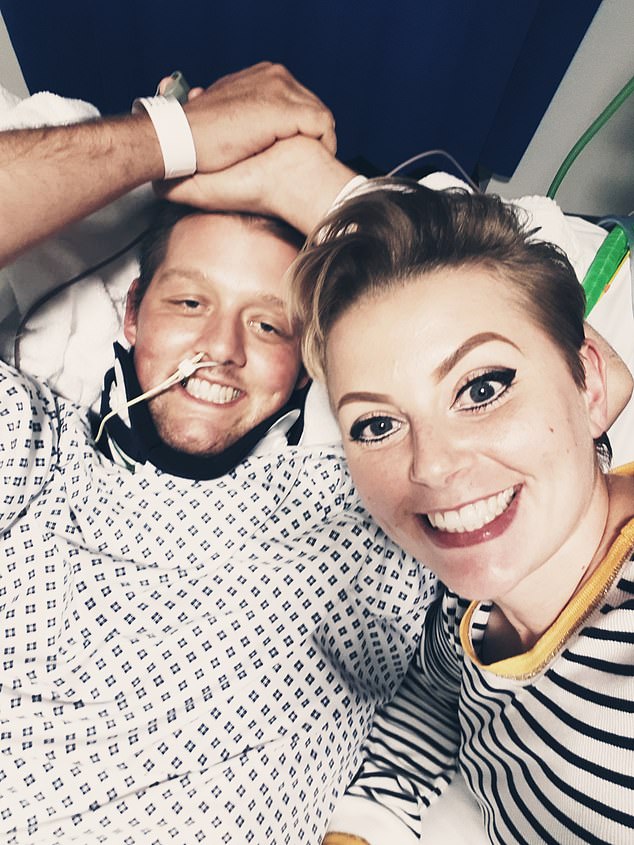 The couple say that getting the big day booked isn’t our priority but they are using the wedding as their goal to get back on track!

South East finalists Alex and David were visiting the US for a friend’s wedding and decided to extend their trip with 5 days before the wedding in New York and then Miami and the Bahamas afterwards.

Alex said of the proposal: ‘We went for a pre-dinner beach stroll and saw stingrays in the sea. The sky was pink and the sea was calm and David had picked the most perfect spot.

‘He had chosen a ring himself and went down on one knee, recording the whole thing whilst pretending we were taking a photo. It was so perfect and set the tone for a perfect 5 days in paradise!’ 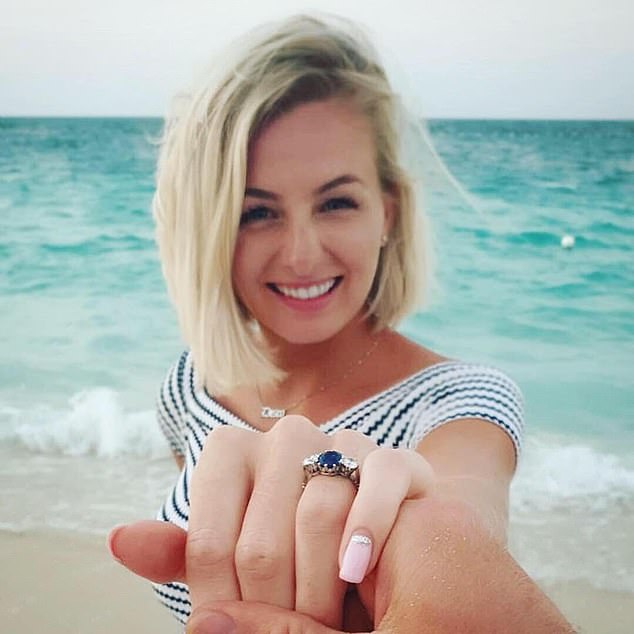 Alex said that David had chosen a ring himself and went down on one knee, recording the whole thing whilst pretending he was just taking a photo 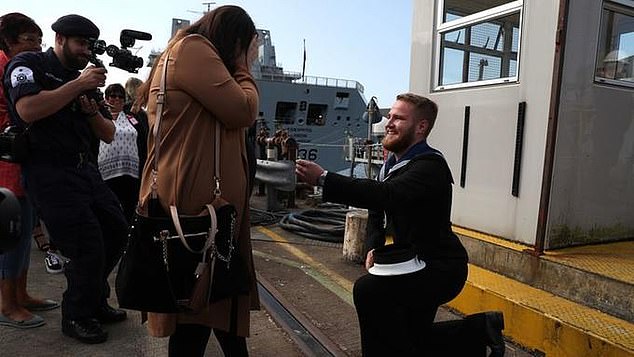 Scottish finalists have possibly one of the sweetest stories – at the beginning of last year Joshua left Hazel behind for an 8 month deployment with the Royal Navy. A few days later she found out that she was pregnant – it was great news and the beginning of their own family.

‘At 37 weeks pregnant I travelled up to Scotland from Doncaster to meet his ship coming back from deployment. As the ship approached to dock, there was lots of tears and happiness to see my partner and only a matter of minutes until we were reunited,’ Hazel said.

‘As I waited he was the first one off the ship and as I waddled towards him he got down on one knee and asked me to marry him! And my reply was “oh my god are you serious?” I couldn’t believe it!

‘It was the most romantic thing he has ever done and the best year of our lives.’ 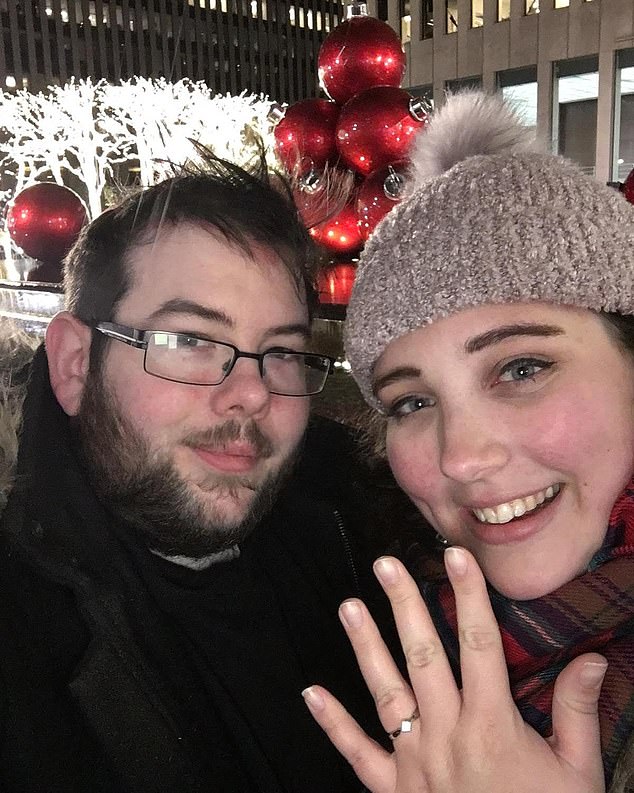 East England finalists Lucy and had both had a tough year, with Lucy admitting: ‘Sadly he lost his dad in June and I lost my mum in August. A week before my mum passed away was my 30th birthday and I received a very special handbag from Aaron which had a very special purse inside.’

The note said that Aaron was taking her to New York – a dream of hers. ‘I cried as I read the note aloud – he was taking me to New York, my dream destination, and we were going to see the famous Christmas tree from Home Alone!’

‘A few months later and we made it to New York on the 28th November – the tree was so beautiful and we stood admiring it and taking photos for a while and then Aaron found a quiet spot at the back of the crowds and tried to persuade me that it was a tradition to make a wish in front of this Christmas tree.

‘I wished that we could be together forever and then he pulled out the ring and asked me to marry him! Of course I said yes! It was a complete surprise and a great way to end our year on a happier note.’ 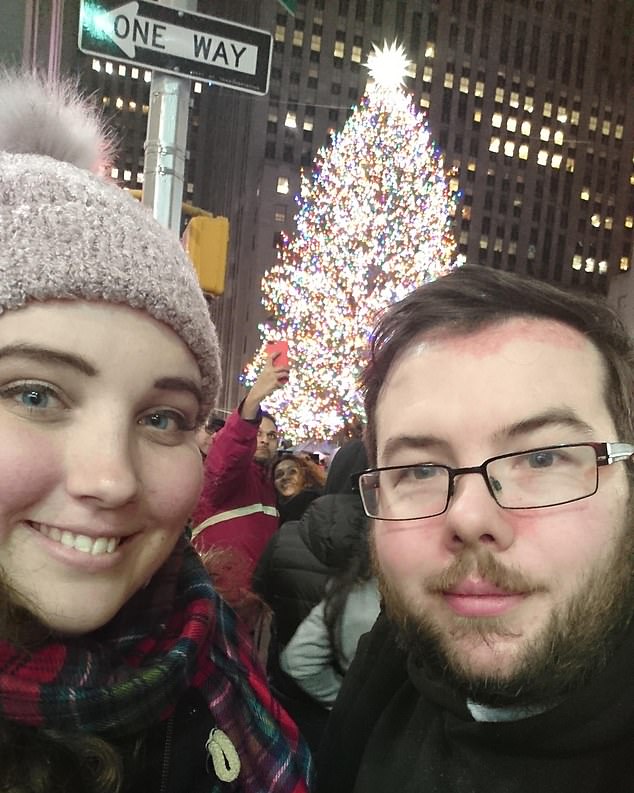 The couple got engaged in New York when he pulled out a ring and asked her to to marry him! 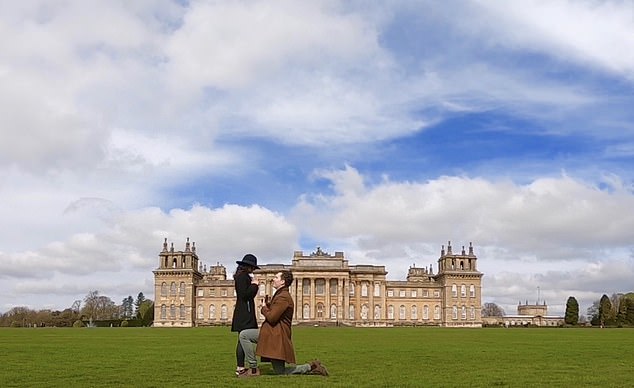 London finalists Daniel and Chasady got engaged at the stunning Blenheim Palace.

The couple met five years ago in New York City and have since had a long-distance relationship, lived in Australia for 2.5 years and settled in his hometown of London.

‘Picture us, the only people on this two-acre lawn, overlooking the entirety of the palace swimming in sunshine. Dan gave me a gentle kiss and got down on one knee,’ Chasady said.

‘For a moment I was in complete shock and then I burst into ugly girl tears. The most touching words were said, but the thing that got me most was how nervous he was.

‘Daniel is the most confident person I know and he shook like a leaf. That just showed he was wearing his heart on his sleeve and exposing his raw, true feelings for me and that meant so much. After he put on the stunning oval ring with diamond band on my finger, he proceeded to lift me up and swirl me around with the most magical kiss.’ 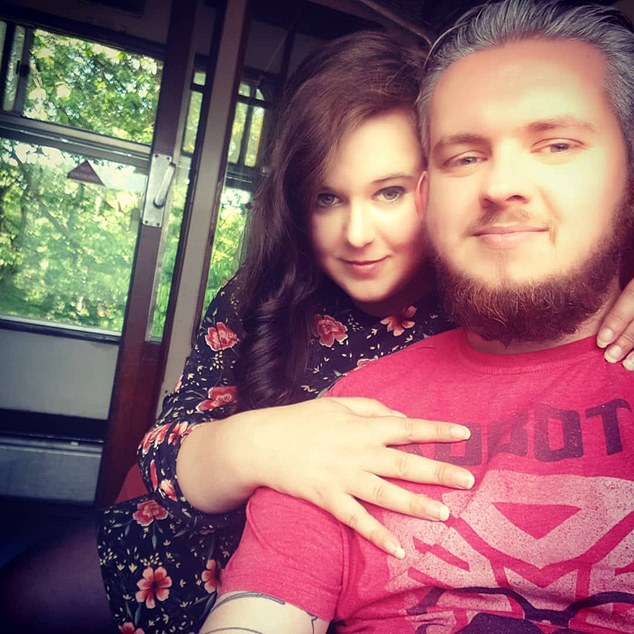 The couple are big Transformer fans and just before their two year anniversary, they went to Transformers convention at the Hilton in Birmingham

North West finalists are both big Transformer fans and just before their two year anniversary, they went to Transformers convention at the Hilton in Birmingham. Alex booked an amazing suite for them and we splashed out a bit more than normal.

‘On the last day of the convention, he bought a Soundwave figure and we went up to the room.

‘He disappeared for a bit but then came back in with the figure and got me to open the cassette tape on it and inside was the ring.

‘It was romantic and very ‘us’ – it meant a lot that it had thought behind it and was true to us as a couple. We got to celebrate with our friends who were at the convention as well.’ 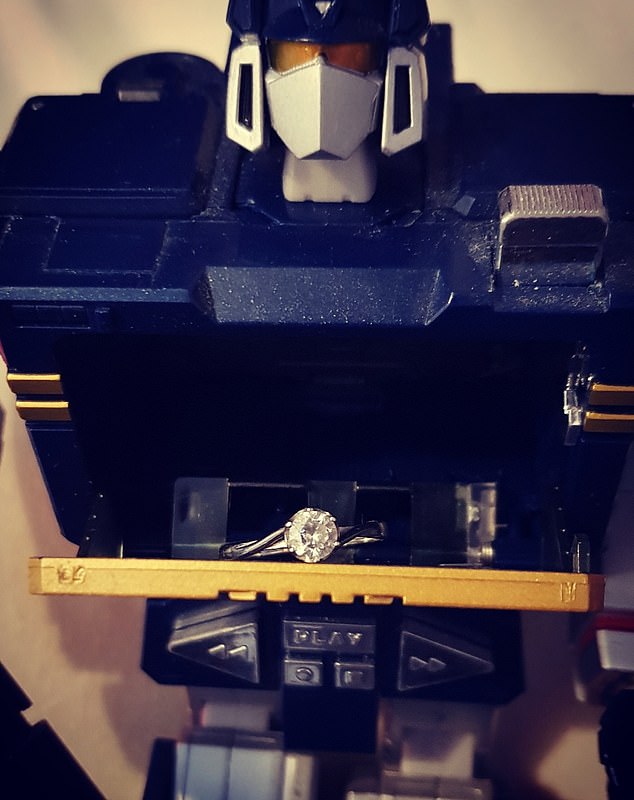 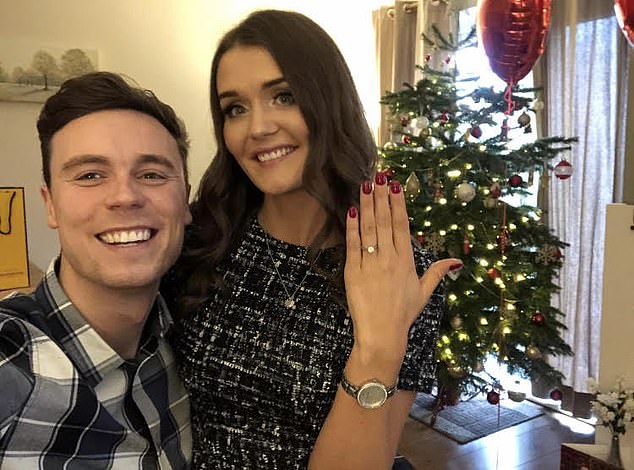 ‘As I walked out of my bedroom, there were rose petals going all the way down the stairs with a different photograph of a memory we have had together on every other step all the way down to the living room door.

‘I opened the door and he was down on one knee in the middle of our living room….’ 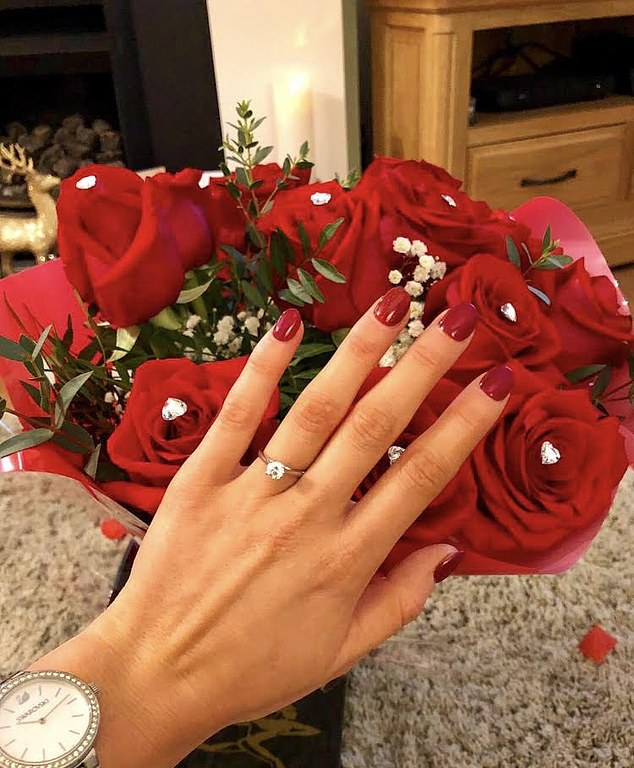 Rachel showing off her ring – she says that the proposal was so amazing, unexpected and romantic 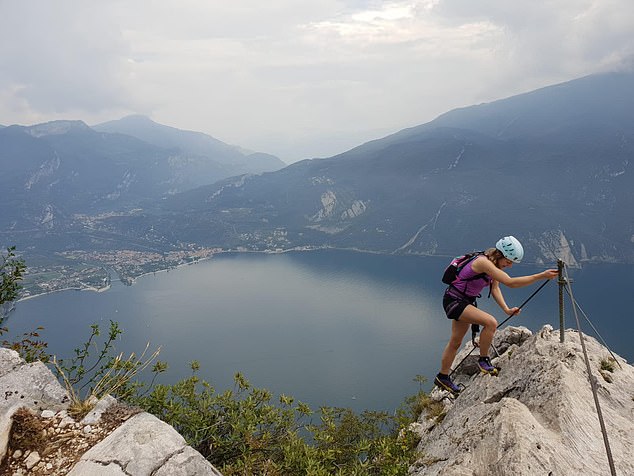 Emma Hewitt and her fiance Richard Rose enjoyed their special moment at the top of Cima Capi overlooking Lake Garda.

After hours of hiking and a vertical rock climb, he popped the question whilst they admired the beautiful views of the lake. 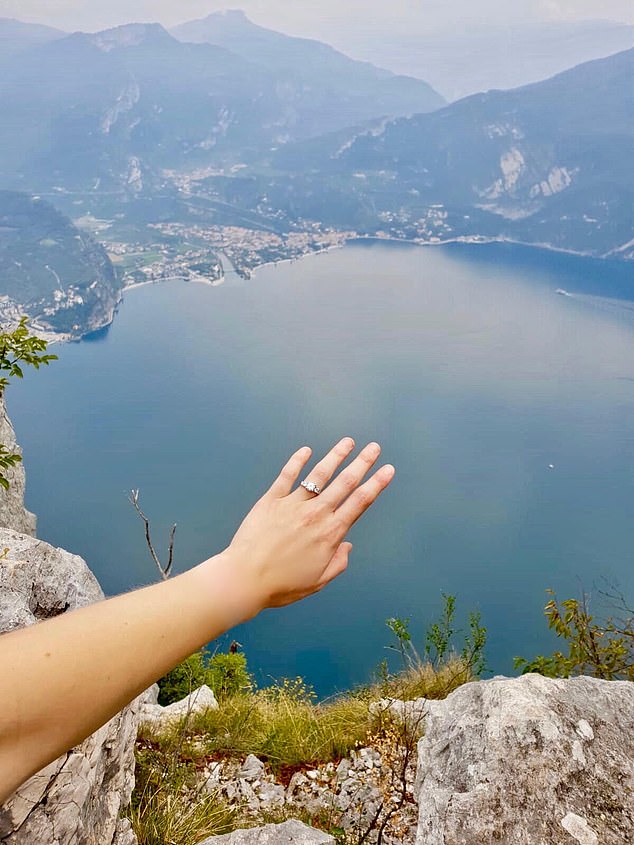 After hours of hiking and a vertical rock climb, he popped the question whilst they admired the beautiful views of the lake. Pictured – Emma shows off her ring 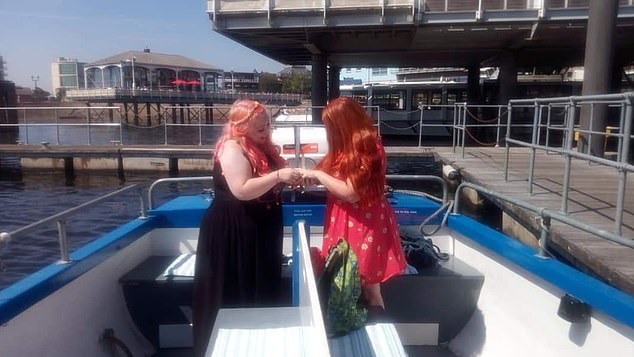 Welsh finalists Sarah and Natasha had a lovely day out for the proposal. Sarah had planned a surprise day out for Natasha in July last year, taking her on a helicopter ride and then down to Cardiff Bay for a boat trip.

‘As we were coming back into dock Sarah pointed lots of storm troopers standing along the dock and as I turned back around Sarah was on bended-knee and asked me to marry her. I burst into tears and of course said yes!’

Sarah then told me to look at the Storm troopers again and told me they were all our family and friends, she had been planning this for months and they were all in on it. 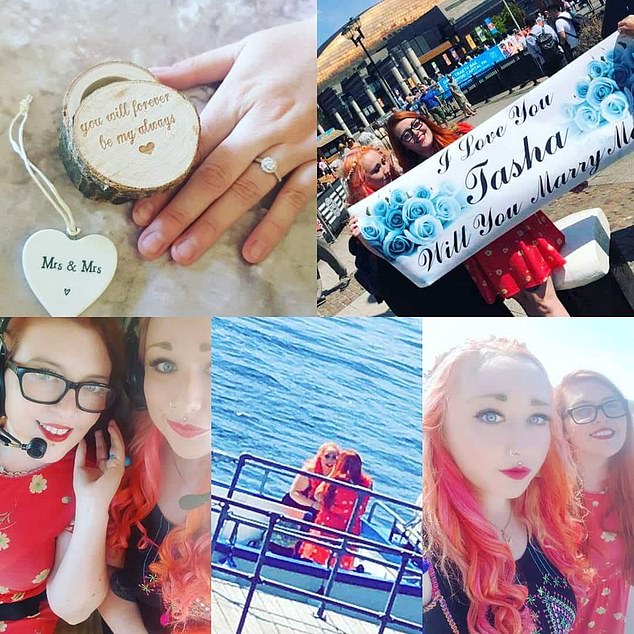 ‘I shouted to tell them I said yes and there was a lot of cheers. Sarah also pointed out they were holding a banner that read ‘I love you Tasha. Will you marry me?’

‘Sarah had then booked for us and all our family and friends to go for some food and drinks……but that wasn’t all as after that Sarah told me I had one more surprise left.

‘It was a night away in the Vale Hotel which included use of the spa and a massage with a delicious breakfast the next day. ‘ 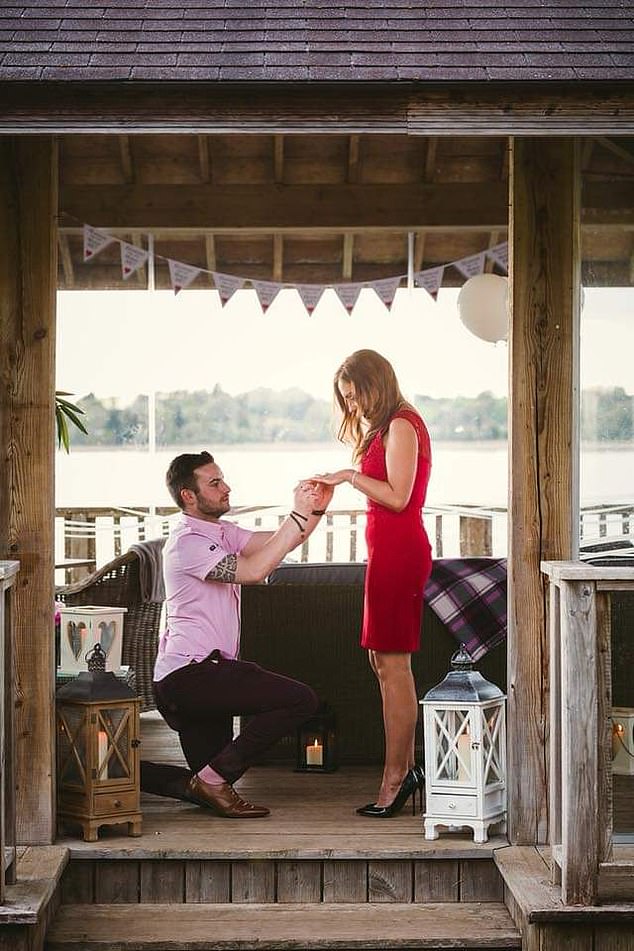 Hannah and her fiance got engaged at the Wine Port Lodge in Athlone, Ireland a year ago

Hannah and her fiance Mark

Hannah and her fiance got engaged at the Wine Port Lodge in Athlone, Ireland a year ago.

He bought Hannah a red Lipsy dress to wear on the night he had planned to propose and it was a very romantic weekend.

Hannah said: ‘When I was getting ready for dinner, he had nipped out as he said he needed to talk to reception – he had actually used this time as his opportunity to create the perfect proposal setting. I was too busy getting ready to think too much into what he was up to.’

‘After a gorgeous meal in the restaurant, my partner and we walked outside for some fresh air. He took me by the hand and walked me over towards a beautiful pavilion that sat out on the lake. He was noticeably nervous at this point, although I still never caught on to what was happening.’ 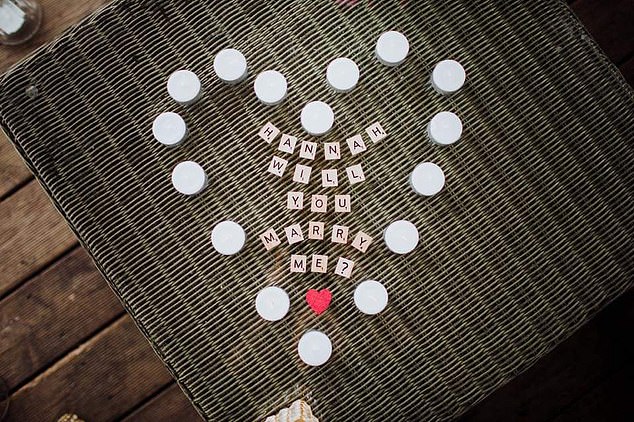 Hannah was amazed by all of the romantic details he had put into the setting – personalised balloons, candles and champagne

‘As I turned around I noticed a photographer hiding in the corner behind us and that’s when it clicked. I turned back to him and continued to follow his lead towards the entrance to the pavilion and that’s when he turned to me and dropped to one knee.

‘I said yes and immediately heard the cheers and applause of the rest of the guests in the hotel out on their balconies watching the special moment!

‘I looked around and was amazed by all of the romantic details he had put into the setting! Personalised balloons, candles, champagne etc.. so beautiful.’