An Instagram flirt, who thought he was in for some ‘action’ when a blonde beauty replied with a saucy snap, got a shock when the cheeky picture turned out to be her fiancé – wearing her knickers.

The online Casanova messaged 21-year-old Amy Perkins from Manchester asking if he could take her for a drink, without knowing she was sat next to her fiancé Ashley Wells, 24.

When she refused and explained she was engaged to her boyfriend of two years, the would-be Romeo then offered to marry her if the relationship ever went sour.

Stunned by the lothario’s boldness Ashley decided to have some fun with the messages, squeezing into a pair of Amy’s knickers and pulling them up to replicate a thong before posing in the mirror to take a photo.

Being careful to hide his face, Ashley then sent the snap to his fiancée’s admirer and received an excited response asking, ‘are you up for that action I was talking about?’.

Not wanting to lead the mystery man on too long the prankster couple, from Manchester, replied with a similar picture but showing Ashley’s face and Amy was blocked immediately. 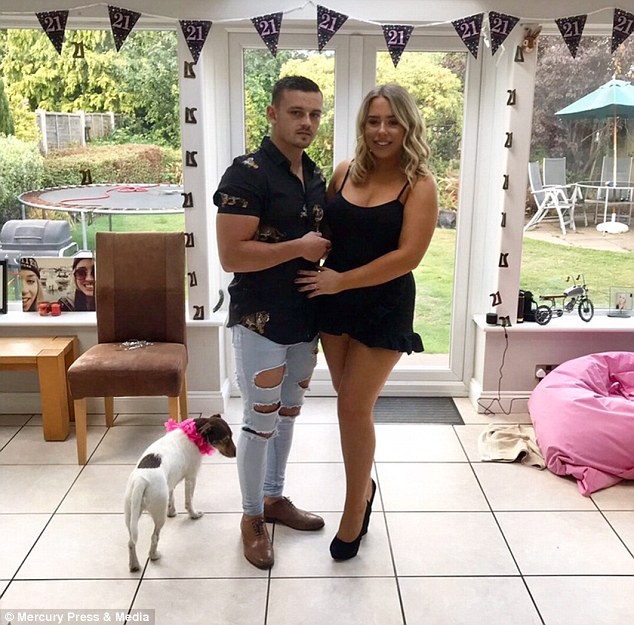 Ashley Wells, 24, and his fiancée Amy Perkins, 21, from Manchester decided to have some fun by pranking a stranger who sent her a message out of the blue to ask if he could take her for a drink 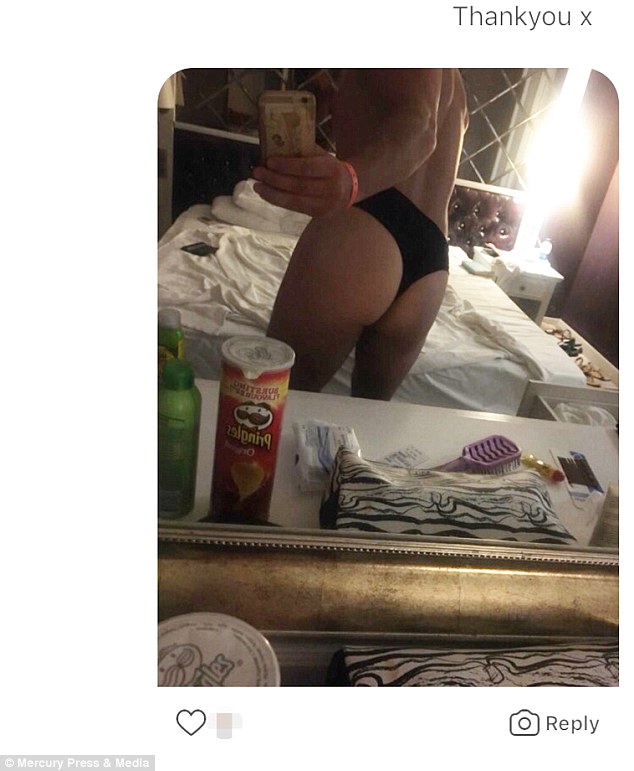 Ashley decided to don his girlfriend’s underwear at their home in Manchester and send a cheeky snap to the man who had tried to woo her online, much to the excitement of the online Romeo who thought he’d received a saucy snap of Amy 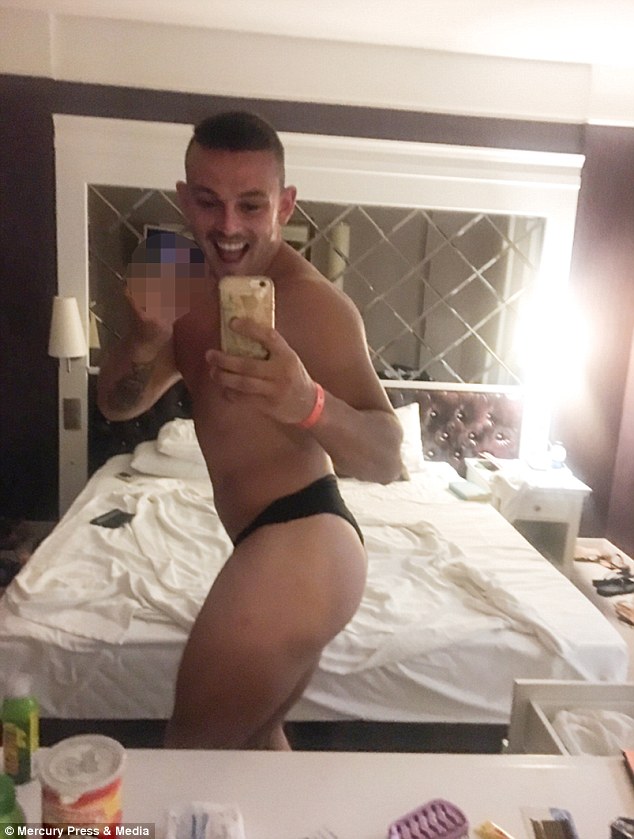 Ashley donned his girlfriend’s underwear and pulled the knickers up to replicate a thong before posing in the mirror to take a photo, which he sent to the man who had offered to marry her if things didn’t work out between them

Manufacturer Ashley said: ‘I wasn’t annoyed, I have been with Amy a long time and I trust her and knew she wouldn’t have responded with anything bad.

‘She’s beautiful and that’s why people always message her but we are engaged and I love and trust her.

‘I just thought I’ll just play it on a little bit. I jumped out of bed and asked her where she kept her knickers.

‘They weren’t very comfy. I had pulled them up so it looked like a thong but it was worth the discomfort. 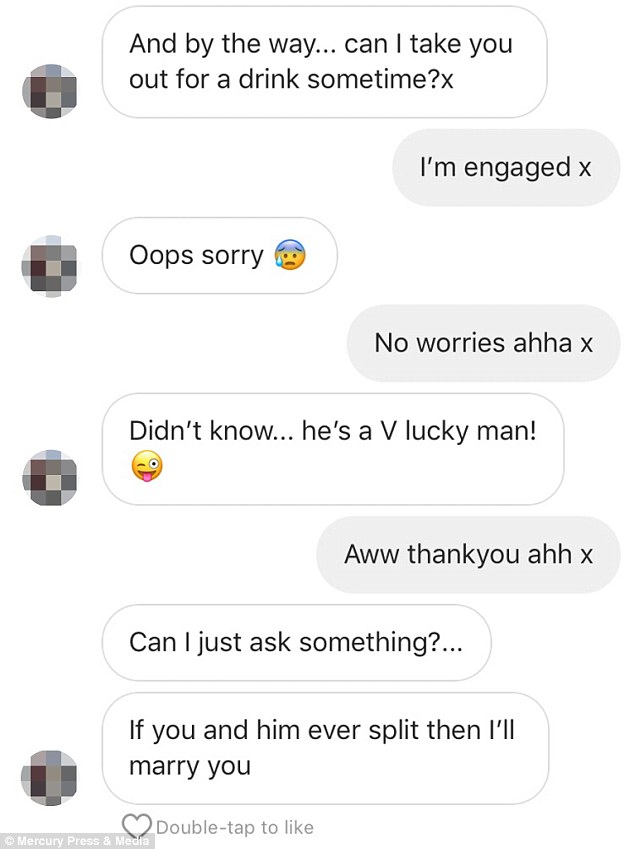 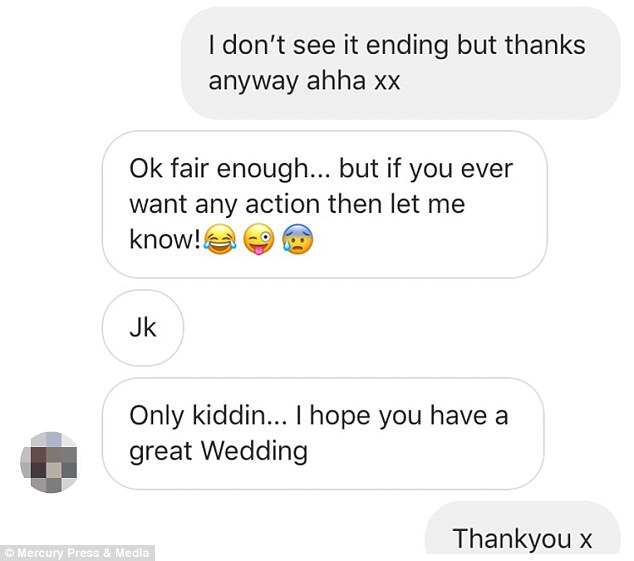 ‘I took a picture and he commented something nice, so he must have liked it but he obviously thought it was Amy.

‘Then I sent a picture of my face and he blocked us straight away. I was only playing it on. I didn’t want to upset him.

‘Since posting the screenshots online I have had loads of comments on my bum which is a strange feeling.’ 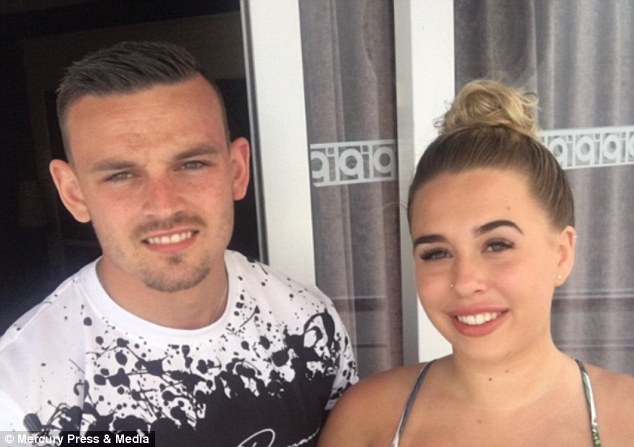 Ashley Wells, 24, Amy Perkins, 21, from Manchester have been together for years and when a stranger messaged the bride-to-be to ask her out for a drink, her fiancé decided to have a bit of fun at his expense 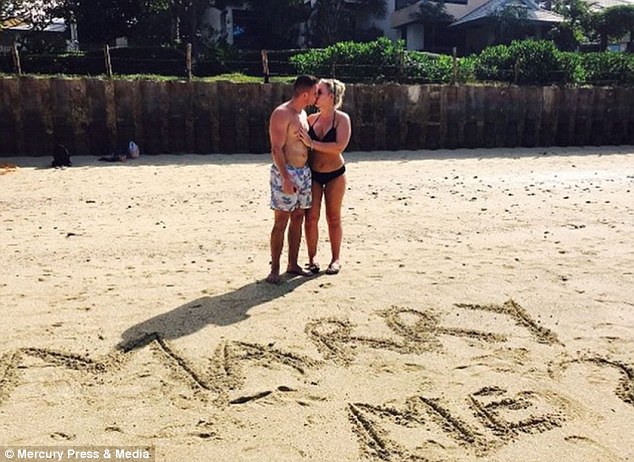 Ashley and Amy celebrating their engagement on holiday. Ashley, from Manchester, decided to prank a stranger who told Amy that he’d happily marry her if things didn’t work out between them

Amy admits that at first she wanted to delete the message and leave it but couldn’t stop laughing when Ashley put her knickers on.

The hairdresser wasn’t surprised the bachelor believed it was her rear as she says Ashley ‘has a lovely bottom’.

Amy said: ‘I was sat with Ashley when I got the message and he asked me ‘what is he saying?’.

‘I was going to delete it but he said lets reply and we’ll teach him a lesson. 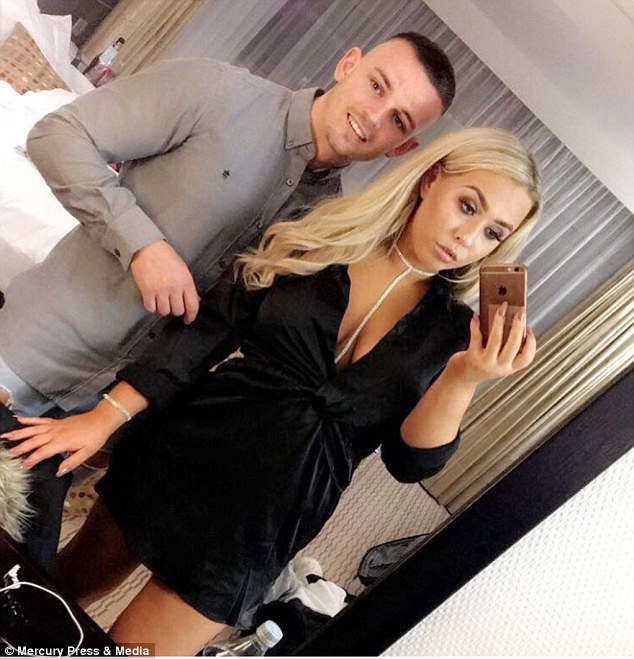 An Instagram flirt, who thought he was in for some action when blonde Amy sent him a saucy underwear snap, not realising it was a prank by her boyfriend AShely who had donned her underwear 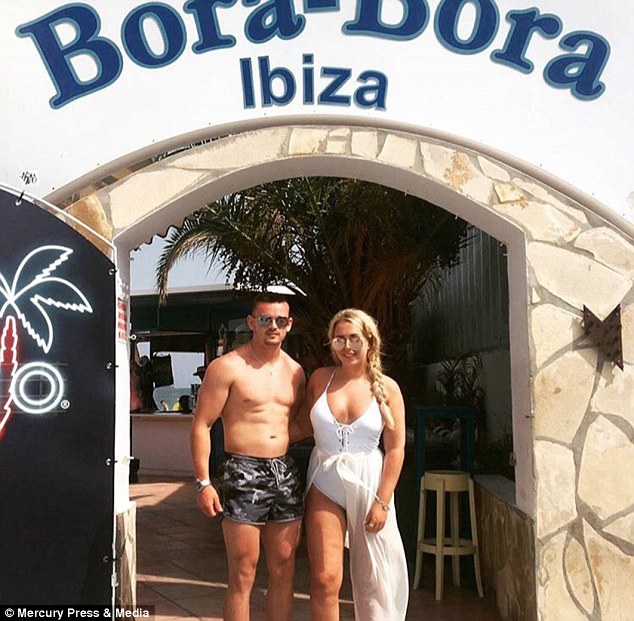 The happy couple enjoying a holiday in Ibiza. They were immediately blocked by an Instagram prankster after Ashley sent him a cheeky snap wearing his girlfriend’s underwear

‘I was quite one worded with him as I didn’t want to be too nice to him and lead him on. Then Ashley just flew out of the bed and asked ‘where are your knickers?’.

‘He just put them on. He’s always messing around so I wasn’t too surprised. I don’t think he was very comfy in them.

‘I had to leave the room because I was laughing so much and the whole room was mirrored.

‘I hid in the bathroom, but I felt really mean. Ashley said it would be funny and he promised he wouldn’t take it too far. 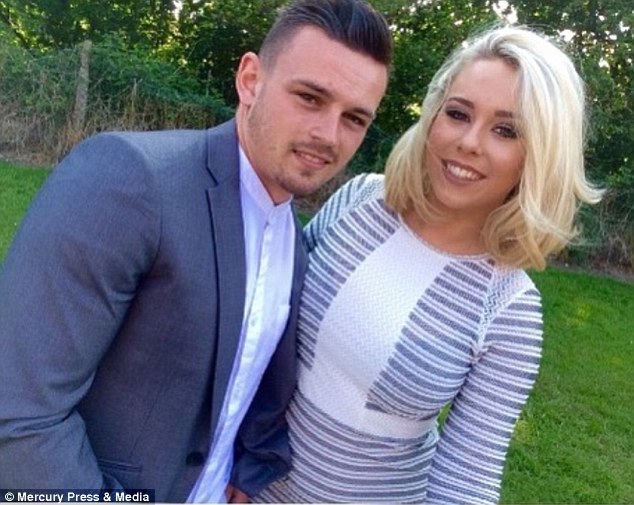 Amy Perkins from Manchester with her fiancé. A would-be Romeo offered to marry her if the relationship ever went sour, but joker Ashley was able to have the last laugh by sending the lothario a cheeky snap wearing his partner’s underwear 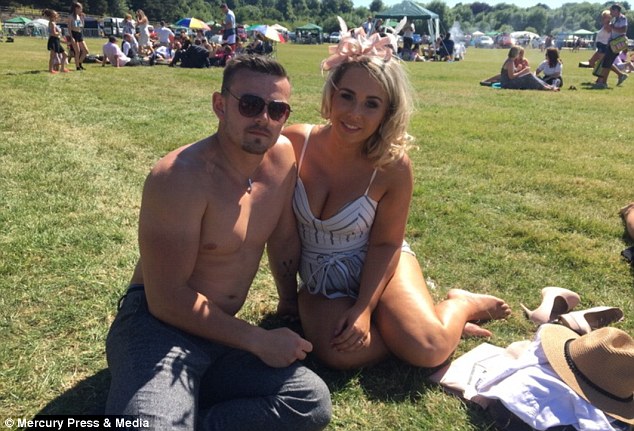 Ashley and Amy from Manchester enjoying the sunshine at a festival. The pair said they have no hard feelings towards the internet lothario who said he’d marry Amy if their relationship didn’t work out 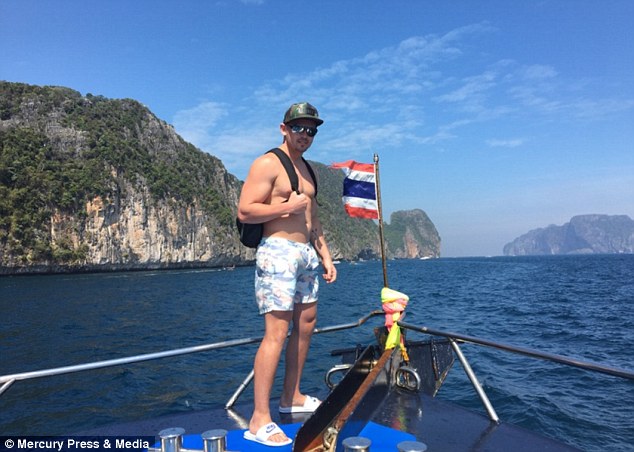 Ashley Wells, 24, from Manchester said that since his story went viral, he’s been surprised and flattered by lots of positive comments about his physique 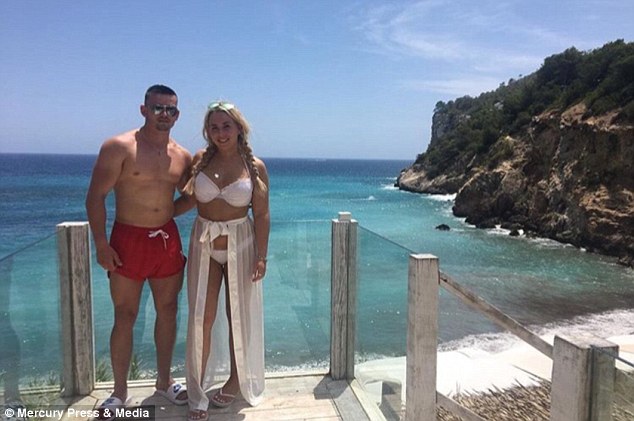 Ashley Wells, 24, and Amy Perkins, 21, from Manchester, pictured soaking up the sun on holiday. The pair are happily engaged and decided to have some fun when a stranger tried to chat Amy up online

‘He just blocked us as soon as we sent the picture with Ashley’s face.

‘We wanted to send it as quickly as possible because we didn’t want to lead him on too much.

‘We have no hard feelings towards him. It’s funny because he does have a good bum so it worked.

‘We were reading through the comments and so many people are saying how he’s got a good bum which is a bit strange.’ 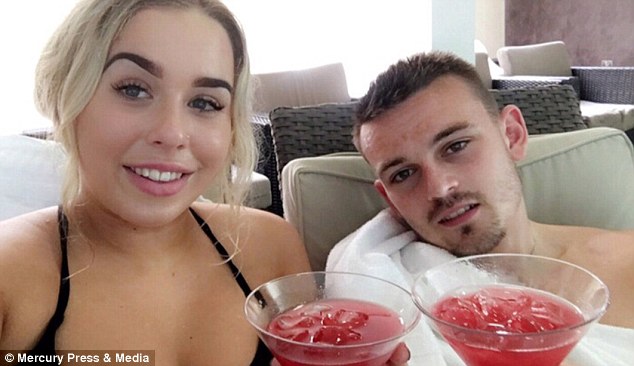 Amy and Ashley from Manchester said they didn’t want to lead on the stranger too much or hurt his feelings, but couldn’t help enjoying a joke after he offered to marry Amy