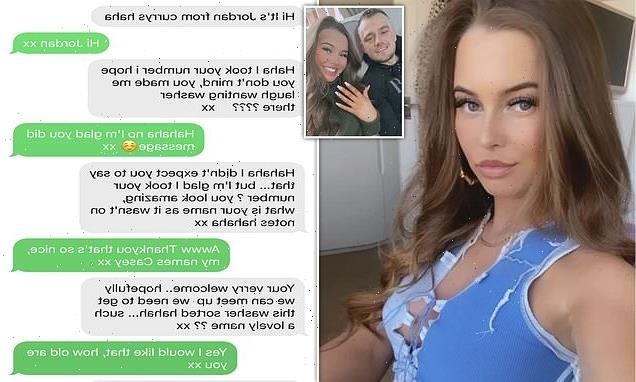 Man, 22, reveals how he got his own back on a ‘creepy’ Currys delivery driver who texted his pregnant fiancée by posing as her and leading him into an X-rated message exchange

A man has revealed how he took revenge on a ‘creepy’ Currys driver who messaged his pregnant fiancée after delivering a washing machine by posing as her over text.

Pregnant Kacey Wheeler, 21, was home alone in Bradford, West Yorkshire, when two delivery men arrived to drop off a washing machine and dryer.

She claims one of the men, identified only as Jordan, ‘couldn’t stop staring at her’ and made excuses to stay back and chat to her after his colleague returned to the van.

Twenty minutes after he left, Jordan text fiancé Ryan’s mobile phone number, believing it was Kacey’s. The number had been entered into the Currys system so the couple could receive updates on the delivery.

Ryan, 22, an electrician, decided to embarrass Jordan by replying and posing as Kacey over text, leading the delivery driver into a flirty six-hour exchange that was later shared on Facebook. 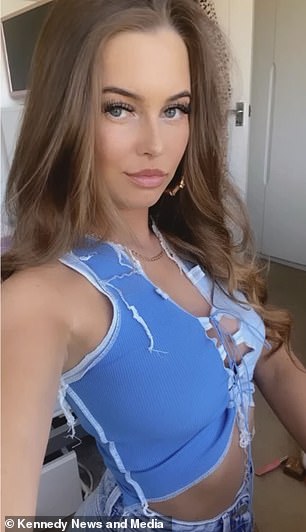 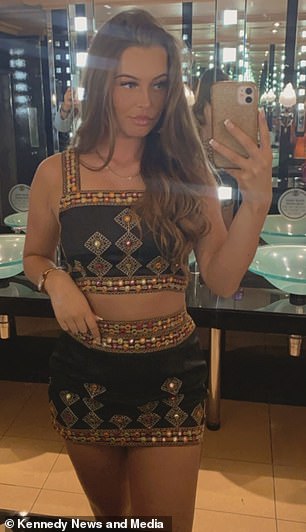 Pregnant Kacey Wheeler, of Bradford, West Yorkshire, claims the delivery man, identified only as ‘Jordan’, ‘couldn’t stop staring at her’ when he arrived with the washing machine and dryer last Thursday. Pictured, Kacey in social media snaps 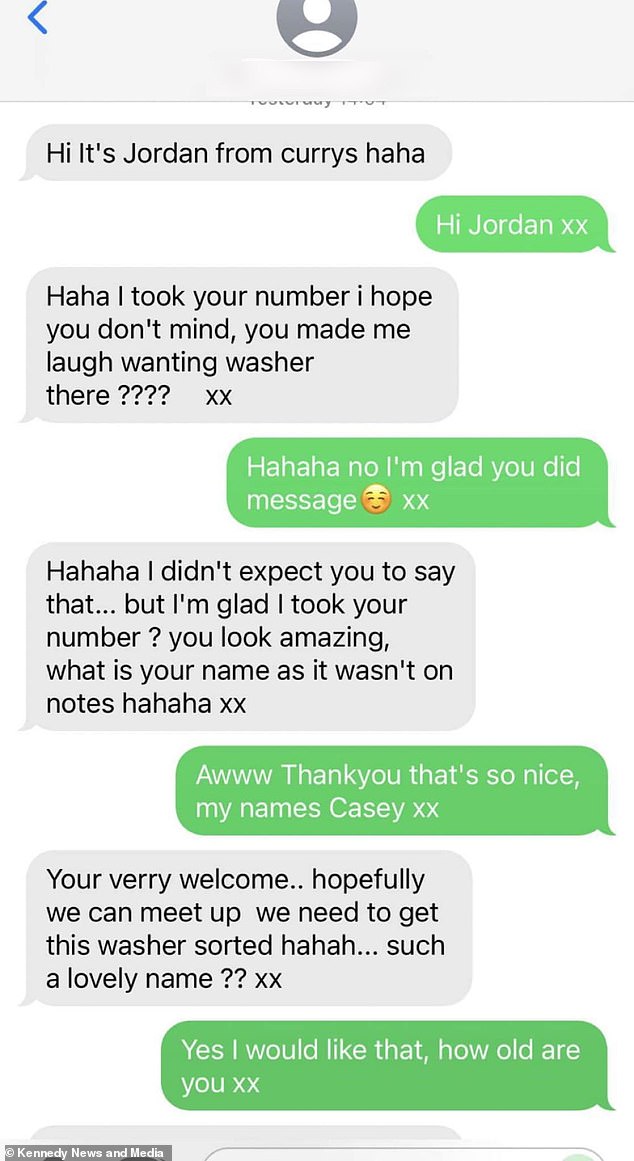 Twenty minutes after he left, the driver text Ryan’s mobile phone number, which had been entered into the Currys system for updates about the delivery, believing it was Kacey’s. Ryan deliberately misspelled his partner’s name in the exchange 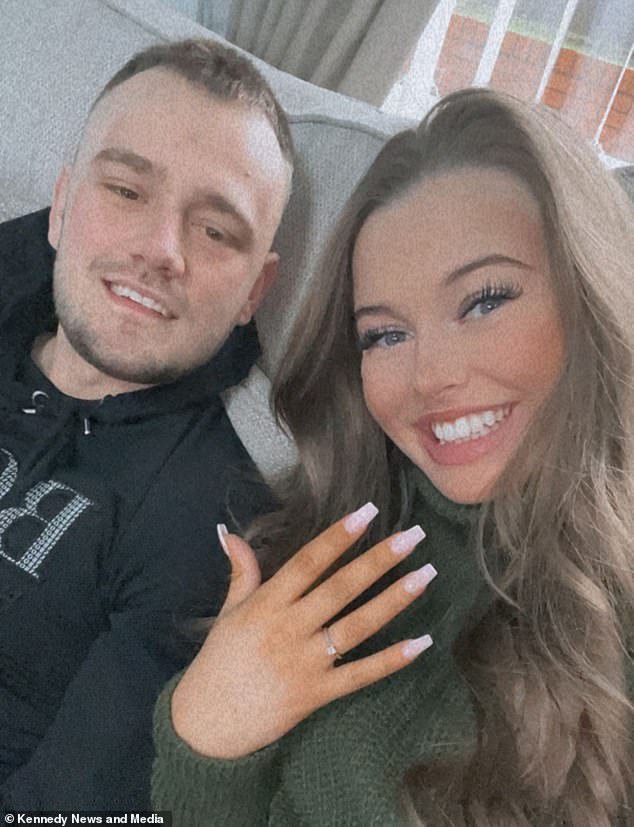 Kacey’s fiancé Ryan, 22, an electrician, decided to embarrass Jordan by replying and posing as Kacey over text, leading the delivery driver into a flirty six-hour exchange that was later shared on Facebook. Pictured, Kacey and Ryan

In the messages Jordan bragged about being a former prison ‘bad boy’ earning £36,000 a year while self-employed and cheekily suggested they should ‘meet up to get this washer sorted’.

Meanwhile Ryan, pretending to be Kacey, asked Jordan if he would be her sugar daddy.

When Jordan messaged the following day to continue the conversation, Ryan put an end to the exchange and revealed he had been behind the flirtatious texts the entire time.

Kacey said she is now afraid to accept deliveries if Ryan isn’t home.

Currys said it is investigating the incident and is treating the matter ‘very seriously’. 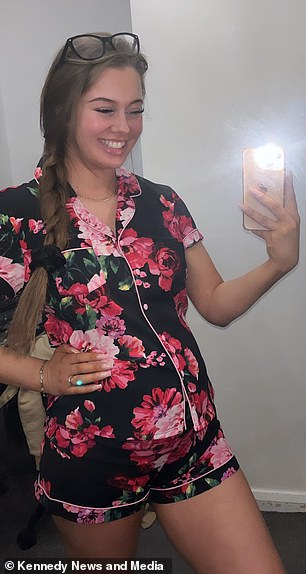 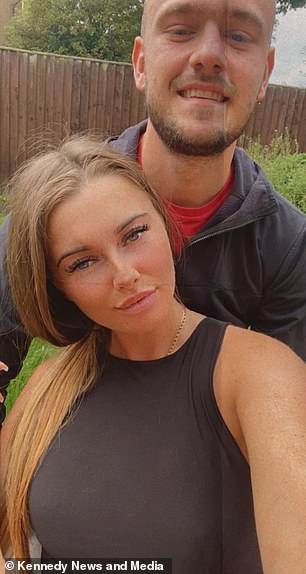 When Jordan messaged the following day to continue the conversation, Ryan put an end to the exchange and revealed he had been behind the flirtatious texts the entire time. Kacey said she is now afraid to accept deliveries if Ryan isn’t home. Pictured, Kacey (left) and with Ryan 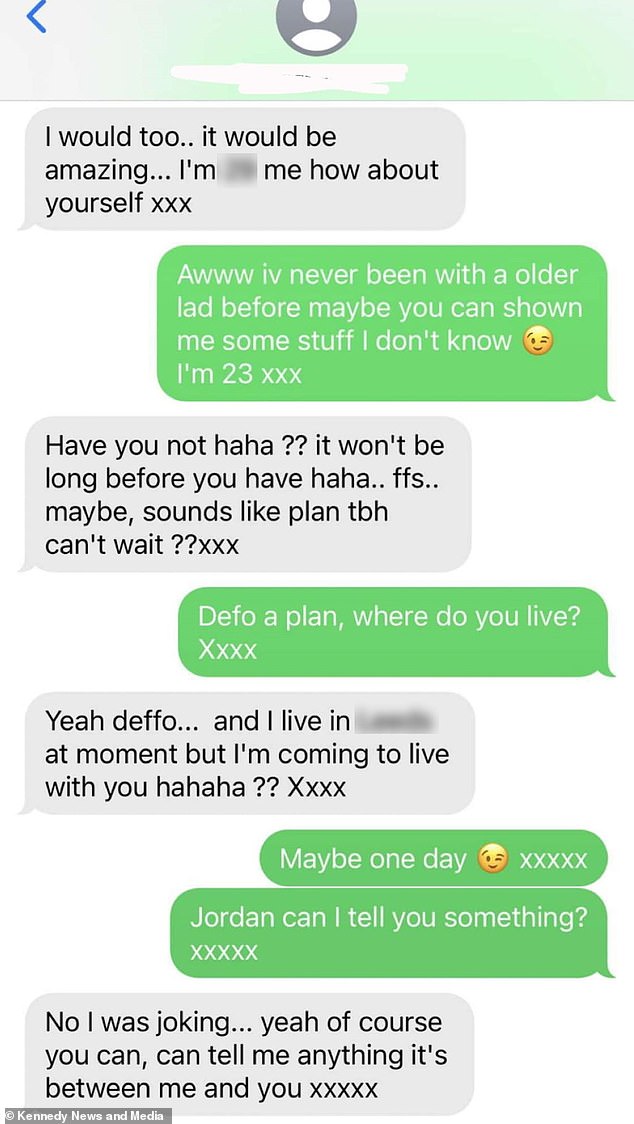 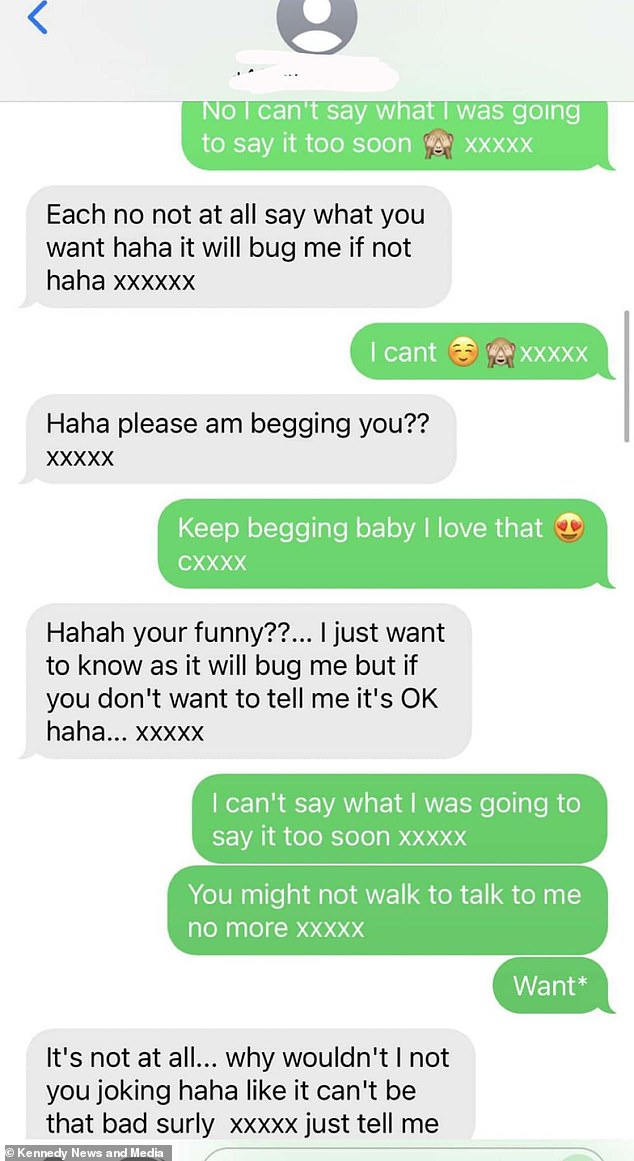 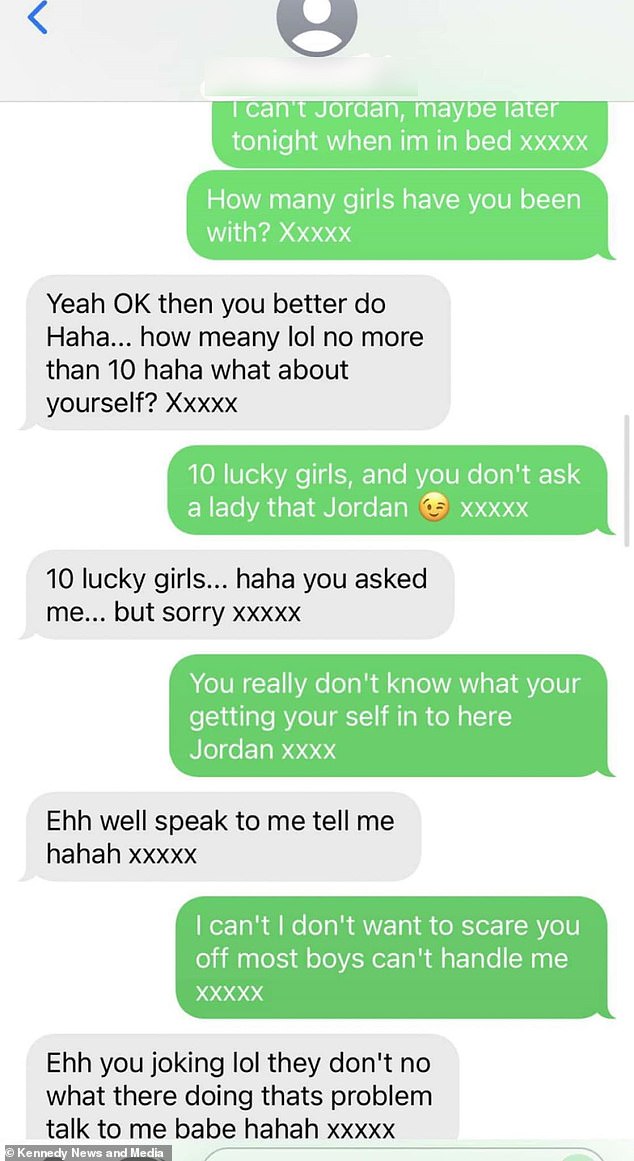 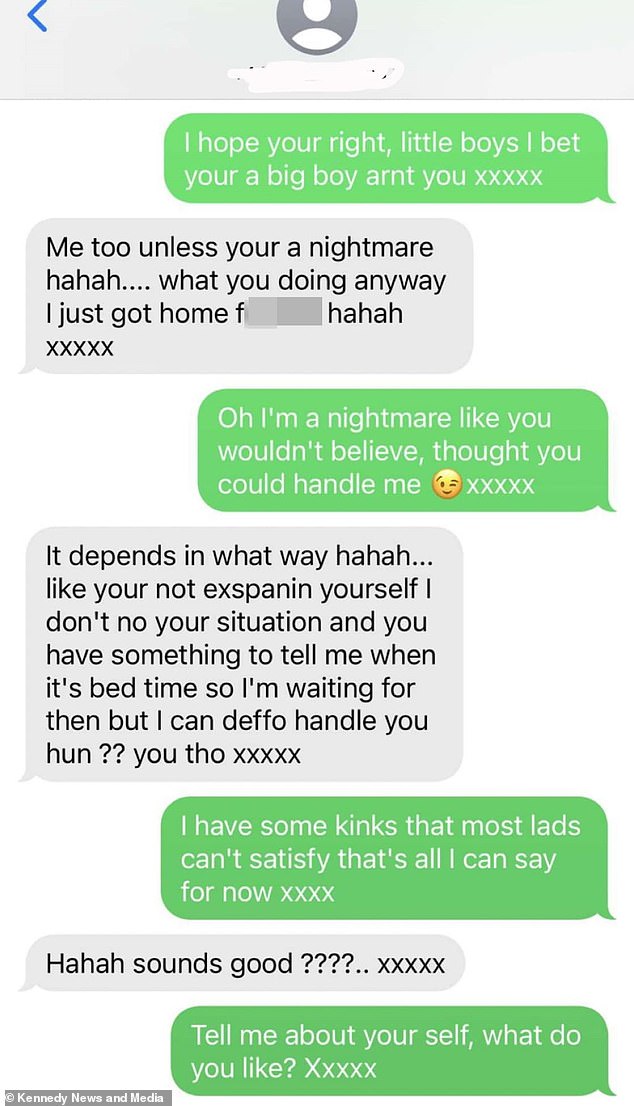 Posing as Casey, Ryan led the delivery driver into an X-rated exchange about his fantasies

Kacey said: ‘As soon as I opened the door I saw one of the guys just didn’t take his eyes off me. I didn’t take it in a weird way at first and I thought it was funny. He was just staring at me.

‘The other guy just came in, dropped the washer and then left, but the other guy didn’t want to leave. He was lingering around telling me where to put it and opening draws.

‘It was really creepy but at the time I just thought it was strange. I was winding Ryan up telling him the driver was in love with me, then I thought he was joking when he said he’d got texts from him.

‘I can’t believe he just took my number off the sheet and he knows where we live. Even if he’d have come into my house and asked for my number it wouldn’t have been as weird. 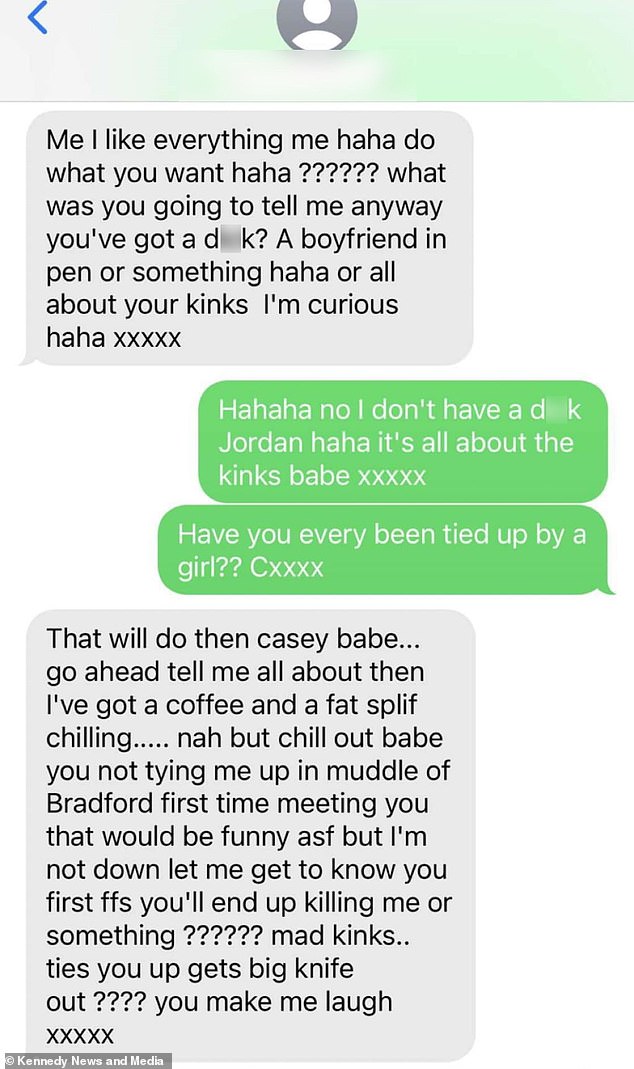 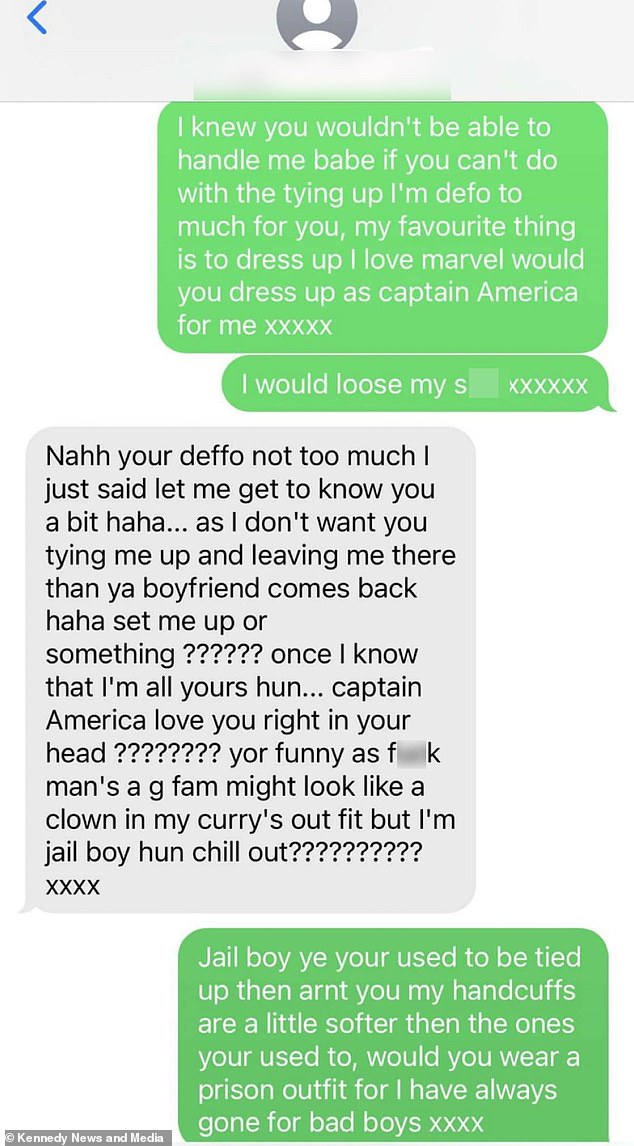 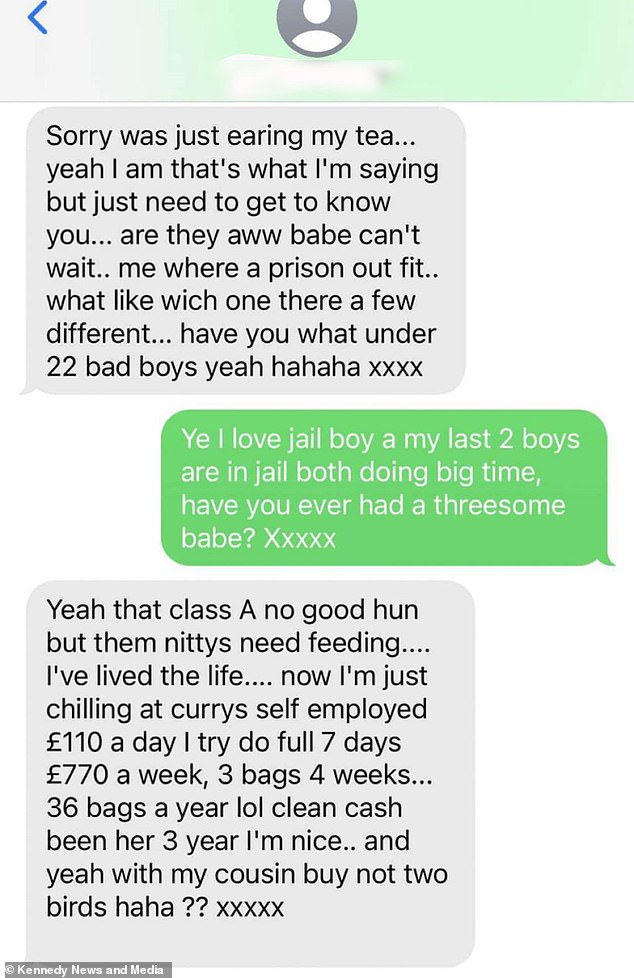 Ryan pretended Kasey had a Captain America fantasy and the driver revealed he earns £36,000 a year

‘I thought that would have been the end of it after the driver left. Ryan thought it was hilarious when he got the texts. I kept ringing him asking for updates and when he was home we kept running over to the phone to check the replies.

‘It wasn’t the worst-case scenario, but the fact he was lingering around in the house and he’d gone out of his way to get my number, I just won’t want to take deliveries in on my own.’

Ryan has contacted Currys to complain and insists he’ll never order from them ever again.

He continued: ‘There’s my shoes in the house, Kacey’s six months pregnant and she’s got an engagement ring on. It’s just utter disrespect.

‘When I got the phone call and the text came through I was annoyed but then I thought I’d make a laugh out of it. 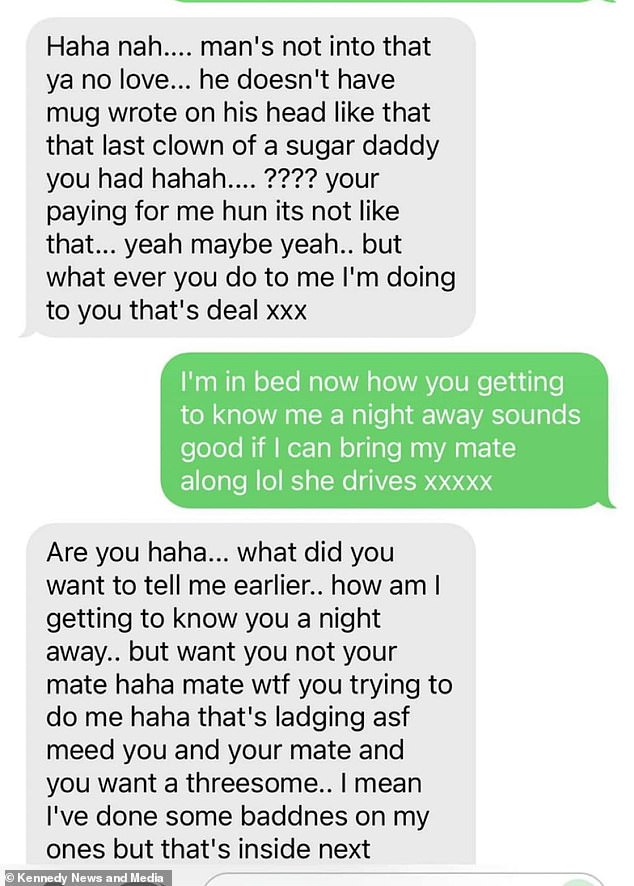 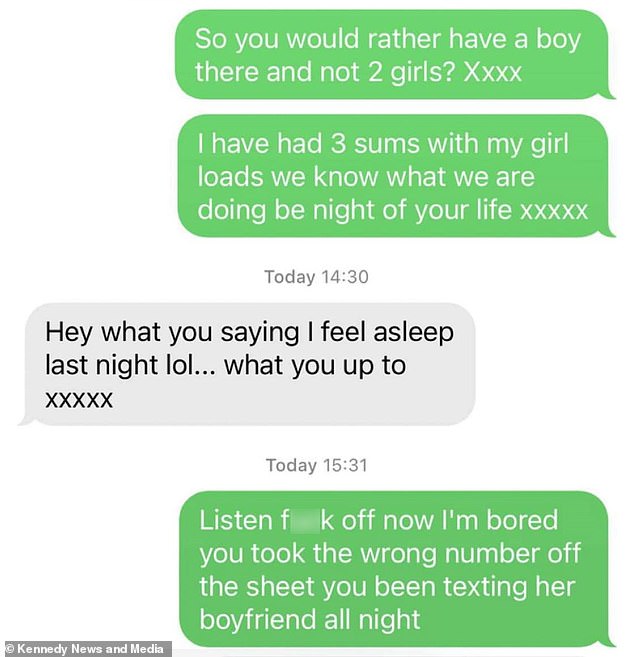 ‘I thought ‘I’m going to [pull] your leg’. My favourite bit was asking him to dress up in a Marvel costume and him replying that he’s a prison boy. He was trying to big himself up.

‘It’s embarrassing. He deserves to have the mick taken out of him. From the texts you can tell he’s a very strange guy. 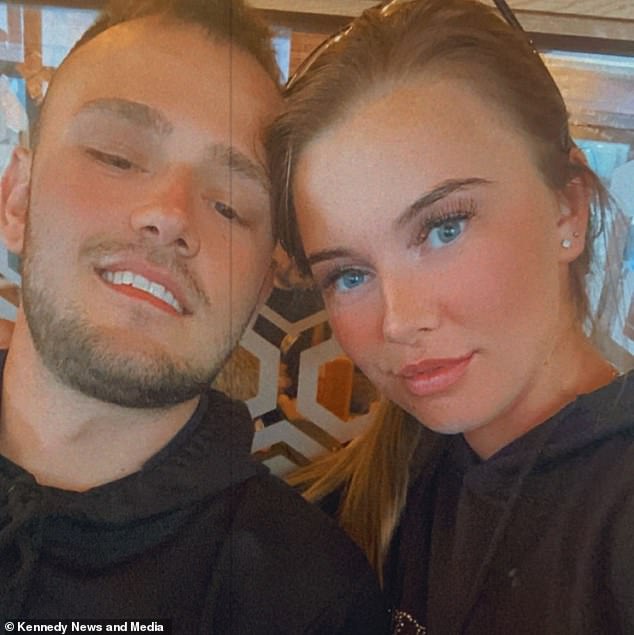 Ryan, pictured with Kasey, said he wanted to embarrass the delivery driver with the texts 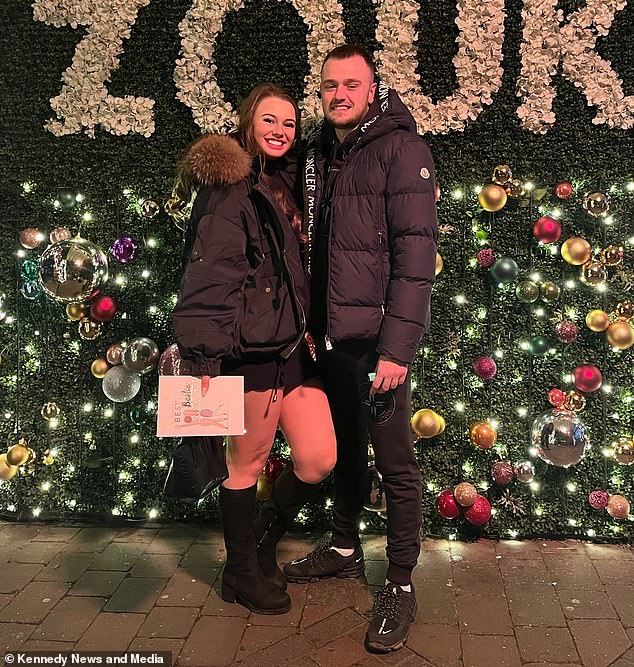 ‘I’m happy he’s wasted all that time. Every time I put something provocative, he’d have been sitting there on his couch sweating, thinking “what do I do with his girl”. He thought he’d pulled.

‘If it was me I’d have felt tiny. I hope he feels like an idiot. If he came back to the house he’d get it, but it’s a shame for Kacey. You shouldn’t be made uncomfortable by delivery drivers like that.’

A Currys spokesperson said: ‘We’re taking the matter very seriously and are currently investigating it further. We will be contacting Mr Sagar and Miss Wheeler as part of our investigation.’ 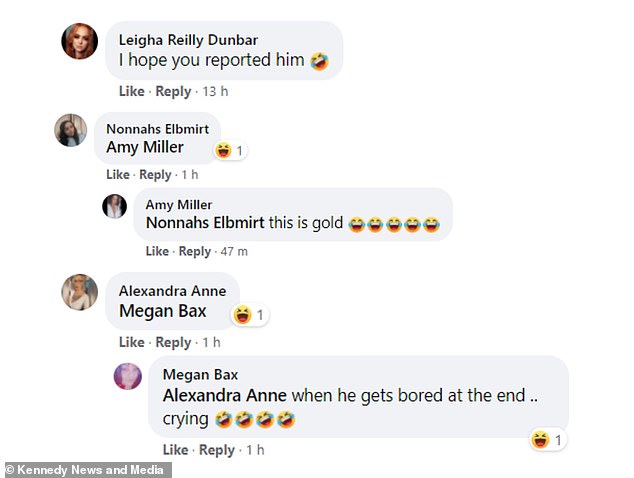 The couple shared the exchange on Facebook where it’s racked up 2,500 likes