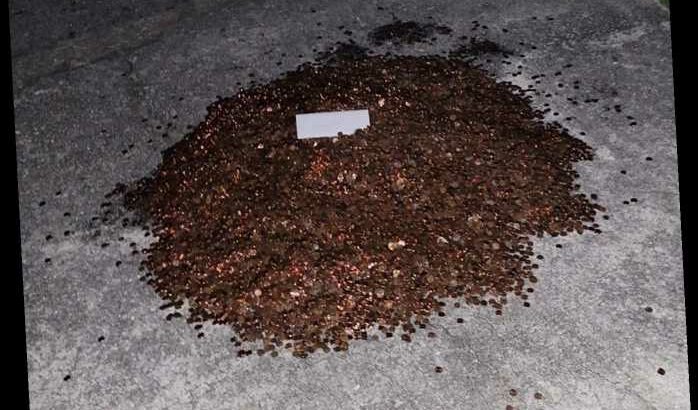 A Georgia man received quite an unpleasant surprise on his driveway recently after asking his former employer for his final paycheck, according to his girlfriend.

Andreas Flaten was shocked to find $915 worth of oily pennies on his driveway Friday, four months after he left his job at Walker Luxury Autoworks in Peachtree City, according to an Instagram post from Flaten's girlfriend Olivia Oxley.

Oxley tells PEOPLE that the pennies were the exact same amount that her boyfriend's final paycheck was worth. She believes his former boss, Miles Walker, was behind the stunt after Flaten complained about the delay in receiving his money.

"At first, we were super ticked because we were trying to leave the house to go get my boyfriend some medicine since he had a stomach bug all day and we had to shovel pennies out of the driveway before we could go anywhere," she says.

"However, after the first shovel full, all we could do was laugh because this poor miserable man took so much time to be vindictive and cruel," she adds. "We absolutely refused to let him ruin a single moment of ours."

Walker, who did not immediately return PEOPLE's request for comment, told CBS affiliate WGCL that he couldn't "really remember" if he had dumped the coins but said, "he got paid, that's all that matters."

After using an obscenity to describe Flaten, Walker attempted to shame the outlet for giving Flaten a "platform" and then asked the reporter to leave his property, WGCL reported. Oxley wrote in her Instagram post that Flaten allegedly provided his boss with a written resignation letter and two weeks' notice back in November.

Though he had intentions of working his last two weeks, Flaten ended up leaving after five days because his boss was allegedly treating him very poorly, Oxley said.

"[Walker] continued to… make a normal workday hell, making unnecessary comments about my boyfriend's daughter," she wrote. "My boyfriend respectfully delivered his uniforms washed and in a box complete with another letter as to why he was leaving early."

Three months later, Flaten still hadn't received his final paycheck — and when he contacted Walker, the boss allegedly refused "to send out the last paycheck claiming damages to the shop," according to Oxley. Flaten later called Georgia's Department of Labor to complain about the situation, WGCL reported, and things escalated from there.

"Once the word 'lawyer' was introduced, this is what he did," Oxley wrote in her post Friday beside a video showing the massive pile of oily pennies on their driveway.

Atop the 500-pound pile was a handwritten note that read, "F— you!"

"I'm not sure what's worse… the fact that this man is so miserable he can't accept an employee leaving because he's the biggest a—hole I've seriously ever met, or the fact that he went through THAT much effort to get $915 worth of HEAVYYY pennies just to say 'f— you'," Oxley wrote in part.

Flaten and Oxley have since scooped the pennies into a large wheel barrel and are currently working to clean them so Flaten can cash them in, WGCL reported. In the week following her post, Instagram users have expressed their disbelief over the situation, with one person writing, "you have no idea what's on those" pennies.

Former employees of Walker's also spoke out to WGCL and claimed that they left due to the toxic work environment that he created.

Speaking to PEOPLE, Oxley says she hopes her boyfriend's story will help "expose what type of person [Walker] is" and prevent others from doing the same.

"Once it aired on the news and people started reaching out, I noticed, not only how many people he has done this to and that he needs to be stopped, but also how many people all over the place are treated so poorly by their employers and feel like there's nothing they can do about it," she says. "I hope this becomes some kind of example."

"We left all of our emotions in the driveway with the initial pile of pennies and have since tried to use nothing but facts and reason," she continues. "We are here to shed light on a person who abuses everybody around them and show others that in a rather crappy situation, you can stay true to yourself, be a decent person and find a little joy and positivity."

"With that many pennies, we're bound to find a few treasures. I've already found one from 1937," she adds. "Be kind to people. Your vengeance could come back at you so hard like it did this man."