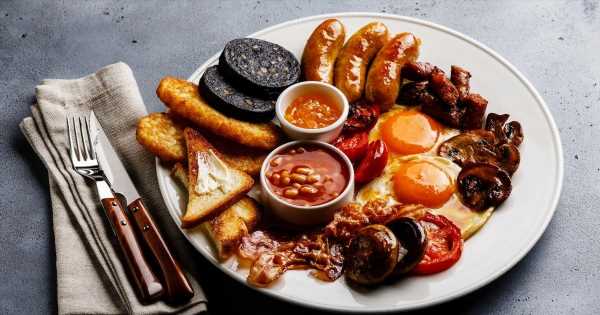 When it comes to food, people can get it really wrong.

Some traditional dishes, like the Sunday roast and English breakfast can't be played with.

But one fella has been grilled for sharing his plate of food on social media.

The Twitter user, named Jordan Mead, posted a photo of two Full English breakfasts but some branded it a shambles.

Snaps were shared on July 17 and the post was captioned: "Name a better start to a Sunday than a full English!"

Hundreds of people have since replied, with many outraged by the fact that Jordan had baked beans and peas.

Others didn't like that he had used vegetarian gammon instead of rashers of bacon.

One wrote: "Peas? No bacon, mushrooms, black pudding. That isn't a full English."

Another added: "While that is a tasty looking dish, you are bending the limits of the name 'full English' lol. Peas?"

A third commented: "No bacon, no tomatoes and peas. Needs to go in bin."

Deliveroo also got involved in the heated discussion as the official account wrote: "Not sure about the peas though."

But some foodies weren't so gobsmacked by the post as one encouraged Jordan to swap peas to mushy peas instead.

It comes as a foodie tried Gordon Ramsay's £16.50 fish and chips to see if "it's worth the money".