Inside the mind of the Iron Lady: In a battered blue notebook being sold this week Margaret Thatcher poured out her true thoughts on feminism (she was one) and John Major (couldn’t abide him!)

At first glance, it seems like an ordinary pocket notebook that many of us possess.

But look a little closer and you will notice that the cover has a logo of the supersonic jet Concorde.

Indeed, it is one of many complimentary notebooks given to passengers who travelled on the plane with British Airways when it was in operation between 1976 and 2003.

And this particular passenger was rather special: Margaret Thatcher.

She used the pages to make notes — written in her distinctive blue felt-tip and often underlined in school-mistressy red for emphasis.

It wasn’t a diary, and the entries aren’t dated. Instead, Mrs Thatcher’s thoughts and quotations come in random order, with a fresh page for a fresh thought or quotation.

At one point, she flipped the notebook round — intentionally or unintentionally — and started writing from the back. That means the writing in the back half is upside down. 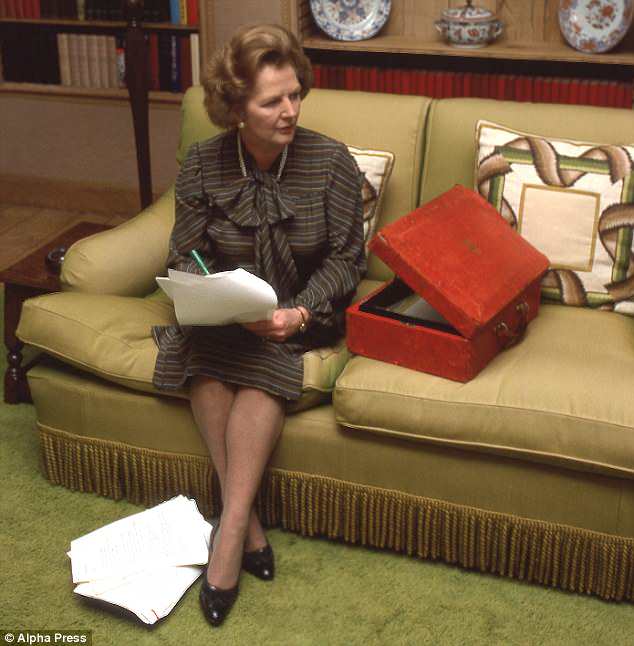 Margaret Thatcher, pictured, used a complimentary notebook from British Airways to make notes – and the book is now up for sale

The book is a remarkable piece of history, containing her innermost thoughts during the years after she stepped down as prime minister. And it will surprise her critics — for it shows her to be a feminist and even quotes communist Karl Marx.

Fascinatingly, they reveal she was still deeply bitter at having been the victim of a coup by cowardly Cabinet ministers who urged her to stand down in 1990.

They show how she was smarting about the policies of her successor, John Major — a man she had groomed, having appointed him her chancellor and foreign secretary.

Her notes give a unique insight into the mind of Britain’s greatest peacetime prime minister: her unshakeable belief in the power of women; her views on the importance of small government; and the value of sensible household finances.

Although the jottings are disjointed and often brief, the Thatcherite ideology shines through and remained unchanged after her fall from power.

Later this month, the notebook is to be sold (for an estimated £25,000) by Peter Harrington Rare Books at the ABA Rare Book Fair in Battersea, South-West London.

There’s no date inscribed in the book but John Ryan, a cataloguer and bookseller, believes most of the notes were written in 1995, five years after she was turfed out of No 10.

Reading them today, it’s possible to understand her anger and pain at having been forced to resign as prime minister, and watching the Major government struggle against a resurgent Labour under Tony Blair.

Some sections show how she felt the Tories had abandoned the principles she employed to rebuild Britain. Speaking of Labour and the Conservatives, she despairingly wrote that ‘neither camp stands FOR anything’.

She added: ‘Differences between parties are narrowing [narrowing is underlined]. Tendency towards pragmatism.’

She also moaned that her free-market values, which had helped reinvigorate the UK economy, had been dropped in favour of more state control: ‘Alas, in the West, political leaders cling to the belief that govt. can manage the economy directly’. 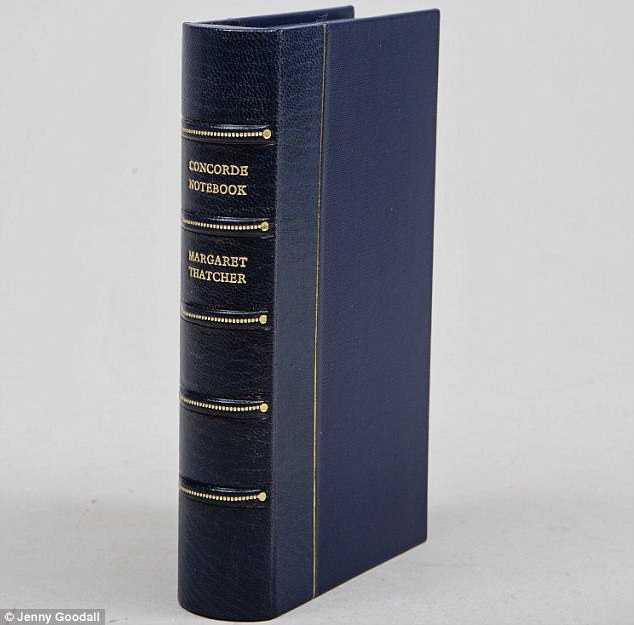 The Concorde notebook, pictured, wasn’t a diary, and the entries aren’t dated – but the book is a remarkable piece of history, containing her innermost thoughts during the years after she stepped down as prime minister

Other passages give an insight into her thoughts about her place in history. She cites the dictum of the Victorian political philosopher Thomas Carlyle, ‘history is the biography of great men’, to which she adds, ‘and women’, clearly with her own legacy in mind.

Manuscripts by Thatcher are rarely owned by private individuals. Most of her papers are held in the archive of Churchill College, Cambridge. This notebook was considered among personal possessions not destined for the archive, however, and is being sold anonymously.

Many of the notes were made in preparation for speeches. She writes of the Pilgrim Fathers, the 17th-century settlers of America, saying: ‘For every Pilgrim Father there must have been a Pilgrim Mother who worked and suffered alongside the men, and who ultimately brought about the success we share as Thanksgiving.’

Similarly: ‘Small business often owed a great deal to the business shrewdness of the wife.’

Warming to this theme — and giving the lie to the Leftist claim that she was not a feminist, but downplayed the role of other women in government while only promoting male ministers, she writes: ‘Many more women can do men’s [underlined] jobs than men could do women’s jobs — bringing up a family . . .

‘This was even more true in the days before the transformation of equipment for the kitchen and home generally. In a way, the advance of technology transformed the lives of women — vacuum cleaners, refrigerators, washing machines . . .’

In other words, she was saying that while women could excel in a male world of business and commerce and, yes, politics, men could not possibly have coped with the domestic chores expected of women.

America, too, is at the forefront of her thinking. She praises her great ally, Ronald Reagan, writing: ‘Reagan and MT. Same beliefs. Same direction.’

‘Ron Reagan, decisive at Reykjavik,’ she writes, referring to the 1986 Iceland summit between the U.S. president and his Russian counterpart Mikhail Gorbachev, which was instrumental in bringing an end to the Cold War.

On the same page, she refers to her own great triumph in the Falklands War of 1982: ‘Falklands issues fundamental.’

Other entries explain Mrs Thatcher’s belief in the importance of the special relationship between Britain and America. 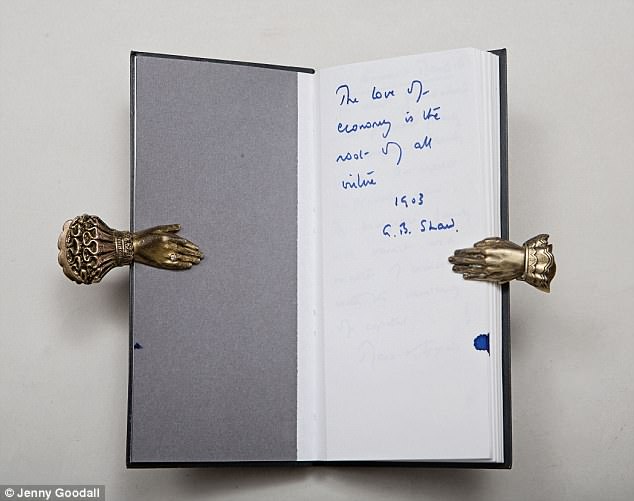 There’s no date inscribed in the book but John Ryan, a cataloguer and bookseller, believes most of the notes were written in 1995, five years after she was turfed out of No 10

This was a reference to coded cable traffic between the two men from the outbreak of the war, through America’s entry in December 1941, until Roosevelt’s death in 1945.

Thatcher’s fundamental belief in the enduring importance of democracy is prominent. She writes: ‘Your role in democracy does not end when you cast your vote in an election — it applies daily — the standards and values that are the moral foundations of society are also the foundations of our lives.

‘Once that is accepted, democracy is essential to preserving freedom.’

She follows that with the quote from the 19th-century historian Lord Acton, ‘Power tends to corrupt and absolute power corrupts absolutely.’ Acton’s aphorism was one of many favourites. Others copied into the notebook include those of U.S. humorist and author Mark Twain, such as: ‘Never prophesy, especially about the future.’

It was a quote she used in a speech titled Challenges Of The 21st Century, which she made in Taiwan in 1996.

S he told her audience: ‘We shall only get the best out of the 21st century if we learn the lessons of this one, which itself has been one of dramatic change — most of which could not have been foreseen.

Another favourite was the Irish writer George Bernard Shaw. On the notebook’s first page, Thatcher wrote: ‘The love of economy is the root of all virtue. 1903 G. B. Shaw.’

Ever eclectic in her sources, but perhaps surprisingly, she quotes Karl Marx and Friedrich Engels’s Communist Manifesto. ‘On what foundation is the present family, the bourgeois family, based?’ she writes, copying their words, ‘On capital, on private gain . . . The bourgeois family will vanish as a matter of course with the vanishing of capital!’ The exclamation mark is Thatcher’s own.

Marx was quoted in order to compare his views with others much closer to Mrs Thatcher’s heart. She said: ‘Contrast Pope Pius XI, “The family is more sacred than the State, and men are begotten not for the earth and for time but for heaven and eternity.” ’

The papal words chime with one of Thatcher’s most famous quotes: ‘There is no such thing as society. There are individual men and women, and there are families. And no government can do anything except through people, and people must look to themselves first.’

Quoting the English 18th-century preacher Thomas Fuller, Mrs Thatcher, the daughter of a devout Lincolnshire Methodist, wrote: ‘Better to have a hen tomorrow than an egg today — Thomas Fuller 1732.’ She then adds an old Chinese proverb: ‘Though you live near a forest, do not waste firewood.’

Waste, needless to say, was one of Thatcher’s great bugbears.

Among her quotes and notes for speeches are charming insights into her everyday life. While staying at a hotel in Dallas, Texas (visiting her son Mark, who at the time was married to his Texan first wife, Diane Burgdorf), she carefully lists the tips for the hotel staff. ‘Tip on behalf of all the party $200,’ she writes.

Intriguingly, she noted the cost of having her hair done — $170.

This unique piece of British history has been compared with the Little Red Book, the quotations of China’s Communist leader Chairman Mao — but the values in Maggie’s Little Blue Book will undoubtedly stand the test of time much longer. 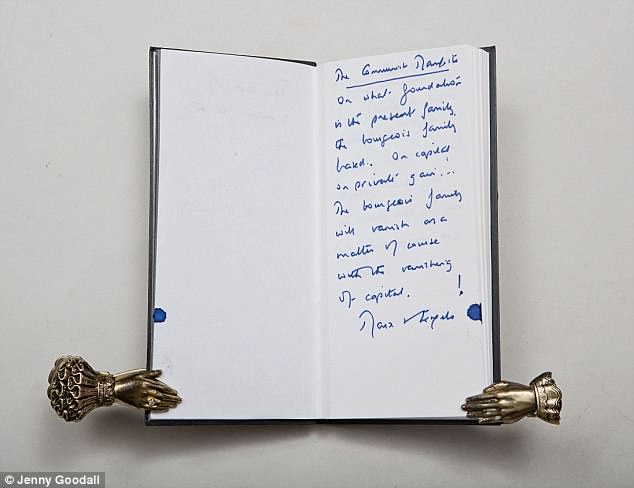