From setting snooze for a ‘solid hour’ to putting salt on food before tasting it, married couples reveal the infuriating habits they’ve been arguing over for YEARS

A woman has initiated an amusing social media thread after asking married couples to reveal their most petty arguments to date.

Rabia O’chaudry, from the US, took to Twitter and penned: ‘Married people: tell me about the stupid, recurring argument you and your spouse just cannot, will not stop having.’

The post, which has since received over 13, 000 likes, was quickly inundated with comments – and it turns out couples from around the nation get peeved off by the silliest of things.

‘My husband insists that clothes he has worn once are not dirty enough for the hamper but not clean enough for the closet, so he leaves them on the floor. We don’t even argue about it any more. Lots of eye rolling though,’ joked one, while another wrote: ‘My husband puts salt on his food before even tasting it. It’s criminal.’ 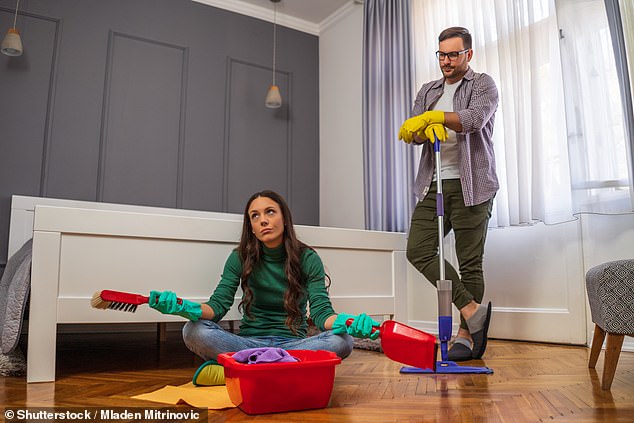 Rabia O’chaudry, from the US, took to Twitter and asked married people to share their more stupid and recurring arguments to date. Pictured, stock image

In the initial post, which has since been liked over 13, 000 times, Rabia penned: ‘Married people: tell me about the stupid, recurring argument you and your spouse just cannot, will not stop having’

Another told how her other half likes to hit snooze for a solid hour – much to her dismay.

‘I like sleeping for the entire hour and not being woken up 6 times (every 10 mins) during it and just setting the alarm for the correct time, not an hour early. He “can’t wake up that fast”. That’s the 15 year (and counting) fight,’ she continued.

Meanwhile, food was another common topic when it came to ongoing arguments that have almost lasted the same duration as the couple’s marital status.

‘He won’t use the last of anything because he thinks I’ll be mad that he used all of it. No! Use it, let me know you finished it and get more!’ commented one.

‘There’s nothing worse than 5 chips in a bag, a shot glass of Oj or teaspoon of hummus. Yes, I have pictures.’

A second wrote: ‘When my husband opens an orange juice bottle or a vitamin bottle or anything with plastic wrap keeping the lid closed or the bottle sealed he leaves it on the counter EVERY TIME.’ 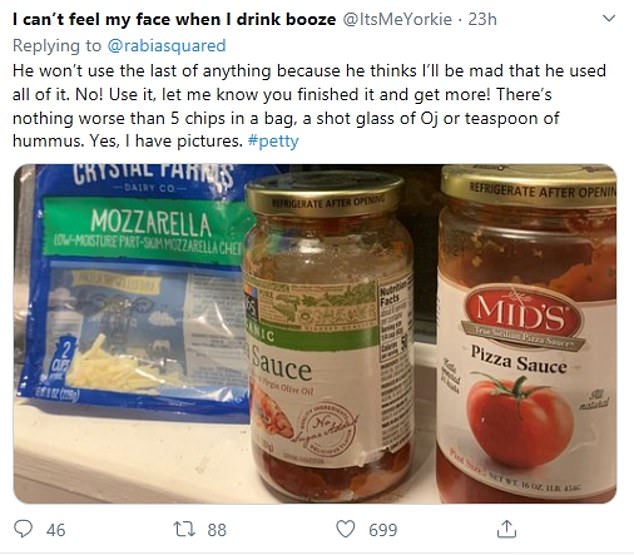 Another told how her husband doesn’t use the last of anything because he thinks she’ll go mad for using it all up, when in fact, it’s the complete opposite

‘Once I collected them all for weeks and crammed them in his pillow case. Twelve years later he still does it,’ while a third added:

‘My spouse will take groceries out of the bag and instead of putting the grocery item into its designated spot directly from the bag, he will put everything out on the kitchen counter and then put the groceries away one by one.’

Meanwhile, one man openly admitted to what he does to annoy his partner – and explained how he always stops the microwave before it goes off and doesn’t clear off the remaining time.

Another told how her husband leaves cups of water out all over the house for hours, but as soon as she picks it up and dumps it out into the sink he’s suddenly ‘dying of thirst’ and gets annoyed she’s tipped it down the sink.

A further told how he and his wife have been silently moving eggs back and fourth in the carton for years due to their recurring argument.

‘She removes eggs from either end of the egg carton, so eggs are left only in the center,’ he began. ‘I move all the eggs to one end, so when you grab the front of the carton, you’re holding the center of gravity.