Where to marry like Meghan and Harry! With St George’s Chapel off the cards, FEMAIL reveals the jaw-dropping castles and stately homes where members of the public can have their own ‘royal’ wedding

The nation is gripped by royal wedding fever as Meghan and Harry’s big day draws ever closer.

And when we finally do see the bride-to-be walk down the aisle beneath the magnificent vaulted ceilings of St George’s chapel, little girls all over the world will be fantasising about having a fairytale wedding of their own one day, just like the Duchess to be.

But while Meghan’s wedding gown will likely spawn a thousand lookalikes, even the most connected brides-to-be won’t be able to copy her venue, as the chapel at Windsor Castle is a Royal Peculiar – meaning only couples who have the express permission of the monarch can marry there.

It doesn’t mean your own ‘royal’ wedding is out of reach altogether, the website hitched.co.uk has compiled a list of alternative options that feel every bit as elegant as Windsor Castle itself.

Here, FEMAIL reveals the historic royal venues and jaw-dropping stately homes where brides-to-be can stage their own ‘Meghan’ moment… 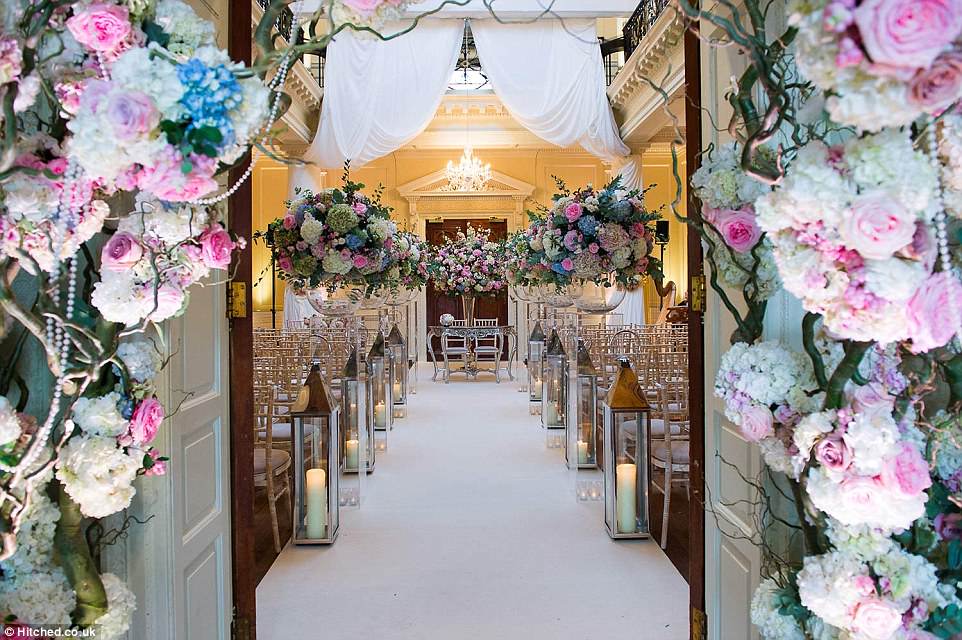 Award winning Hedsor House in Buckinghamshire has been described as a dream wedding venue by both Vogue and Tatler. The refurbished country house was once home to the 18th century Princess of Wales, Augusta of Saxe-Gotha, and was frequented by Queen Victoria. It can cater to wedding parties of up to 150

THE GLASSHOUSE AT THE ROYAL BOTANIC GARDEN, KEW 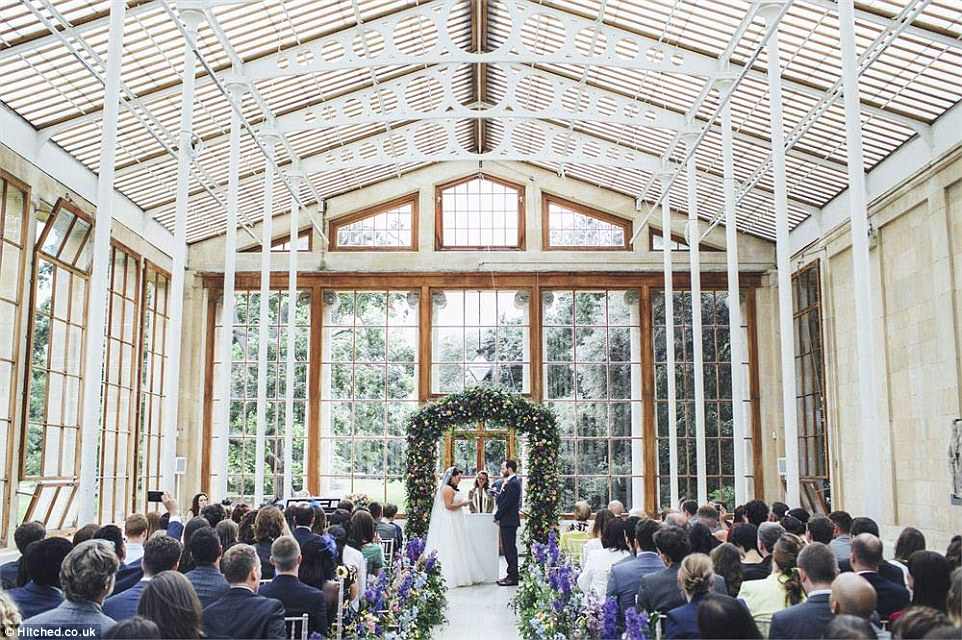 The stunning Nash Conservatory at the Royal Botanic Gardens, Kew, was painstakingly moved from Buckingham Palace in 1836 by Prince Harry’s ancestor King William IV and is flooded with natural light – perfect for a summer wedding 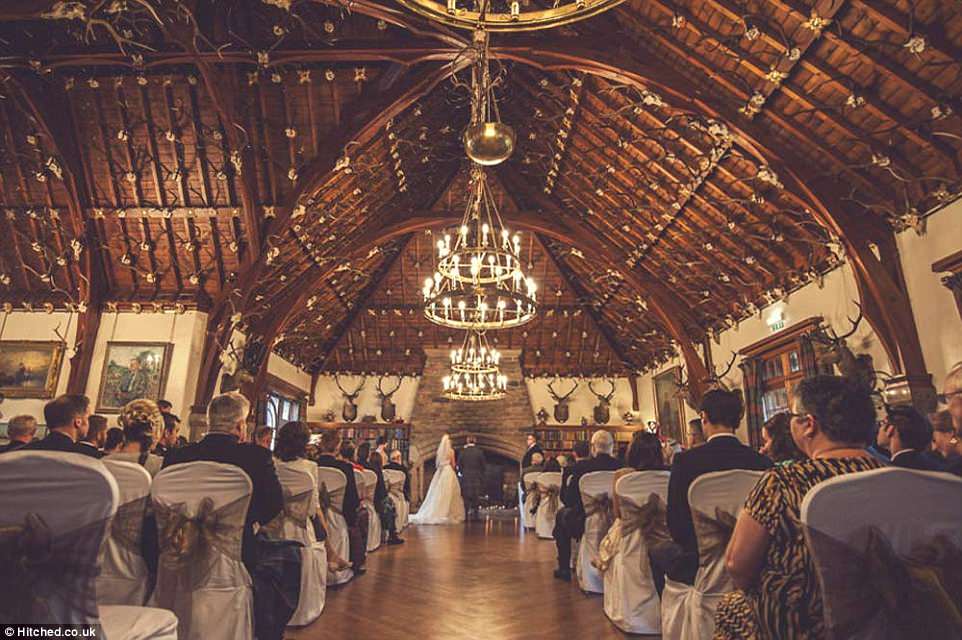 One of Scotland’s most spectacular venues, the Victorian ballroom at Glen Tanar in Aberdeenshire dates back to 1869 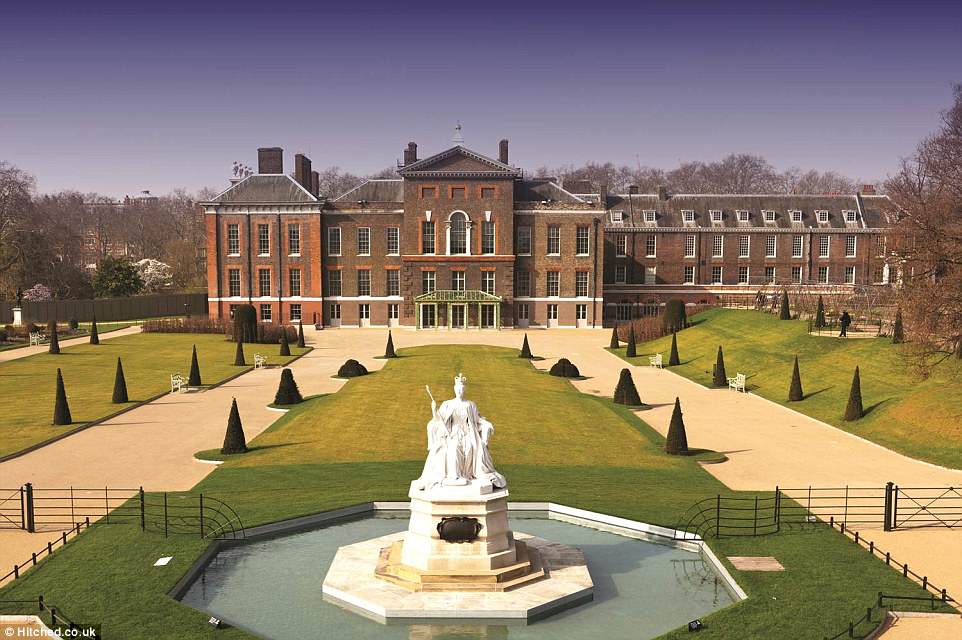 This venue’s royal connections need no spelling out. The royal bride and groom-to-be themselves live in Nottingham Cottage in the grounds of Kensington Palace, and Kate and William live in Apartment 1a with Prince George, Princess Charlotte, and newborn Prince Louis 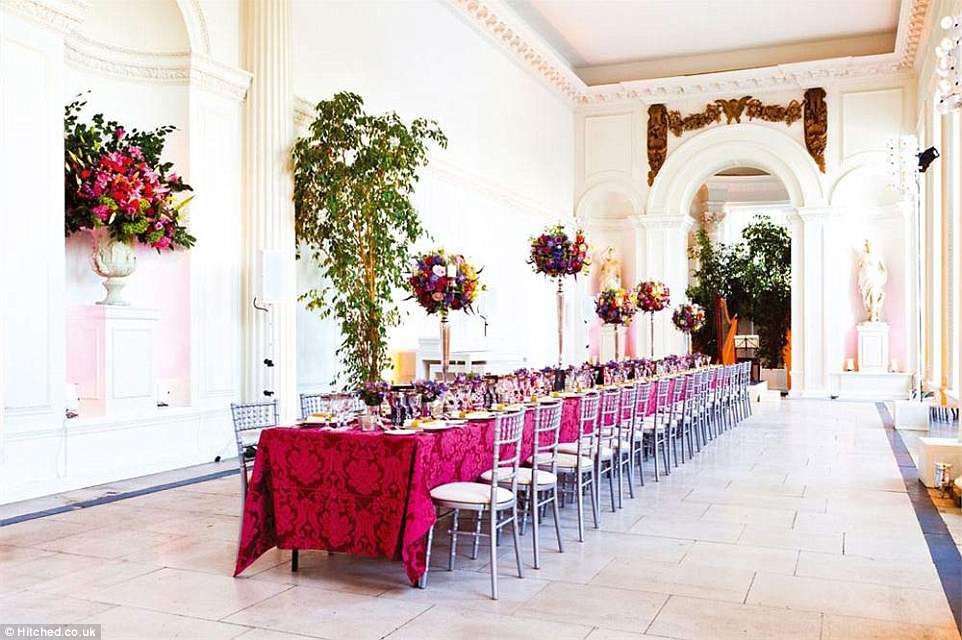 The Orangery at Kensington Palace can accommodate up to 150 guests for a civil ceremony, or the Orangery Lawn can host a marquee reception for 1,000 if your guest list is on the scale of Harry and Meghan’s… 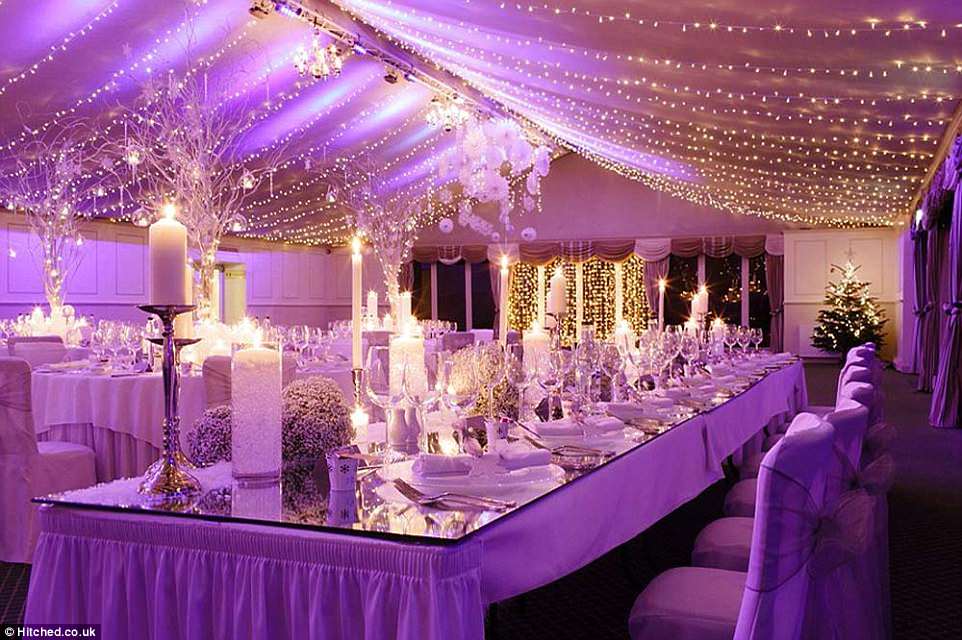 A 15th century castle in picturesque Edinburgh, the venue was home to the Dundas clan for hundreds of years – including Hugh Dundas, who served under William Wallace, and his son George, who fought at the battle of Bannockburn alongside Robert the Bruce 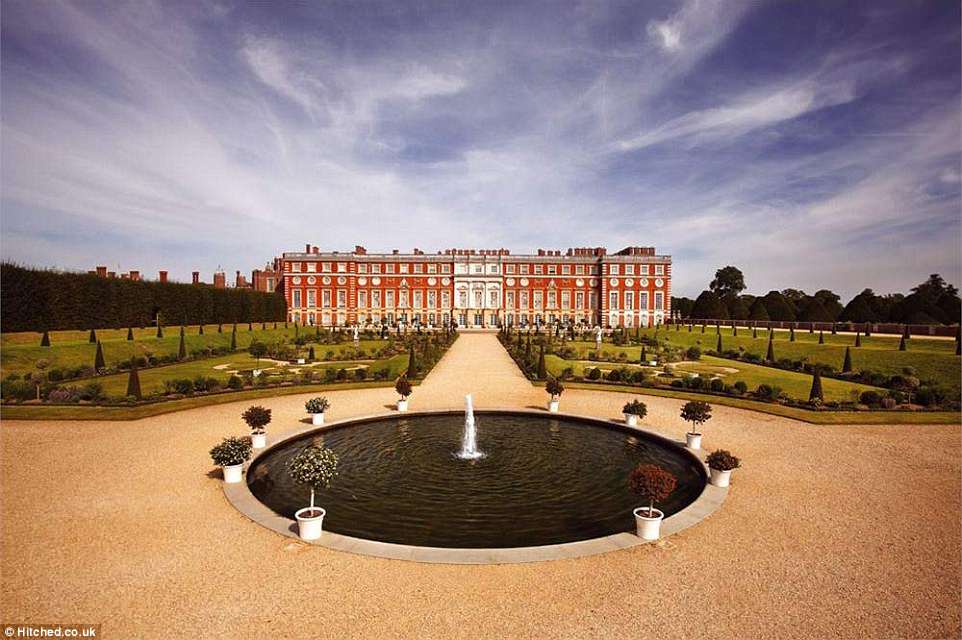 Hampton Court Palace, Surrey (pictured) is most famous as the home of Henry VIII and his six wives. The Tudor venue features impressive views of the River Thames, and can accommodate parties of up to 400 guests 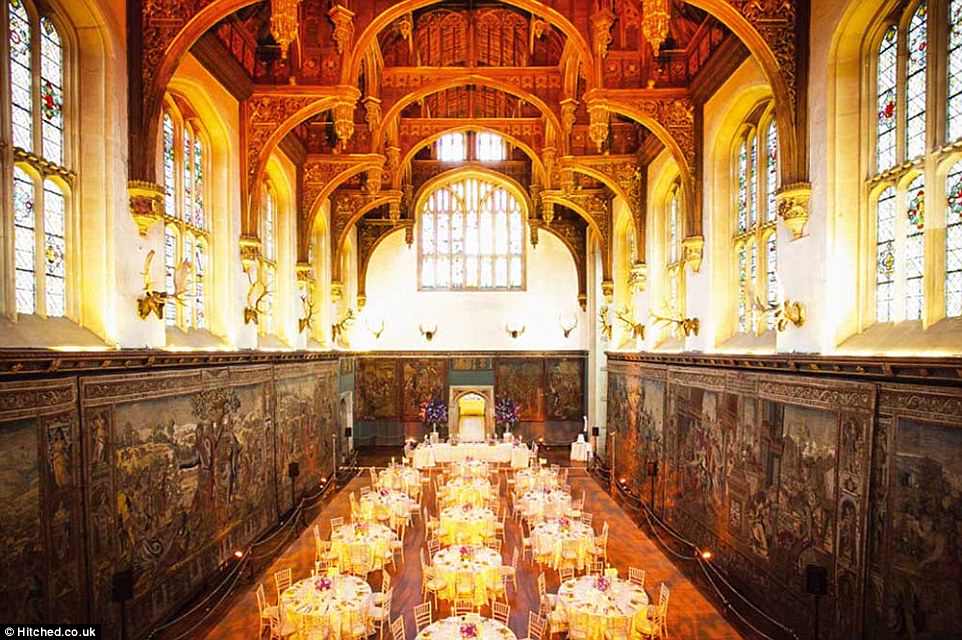 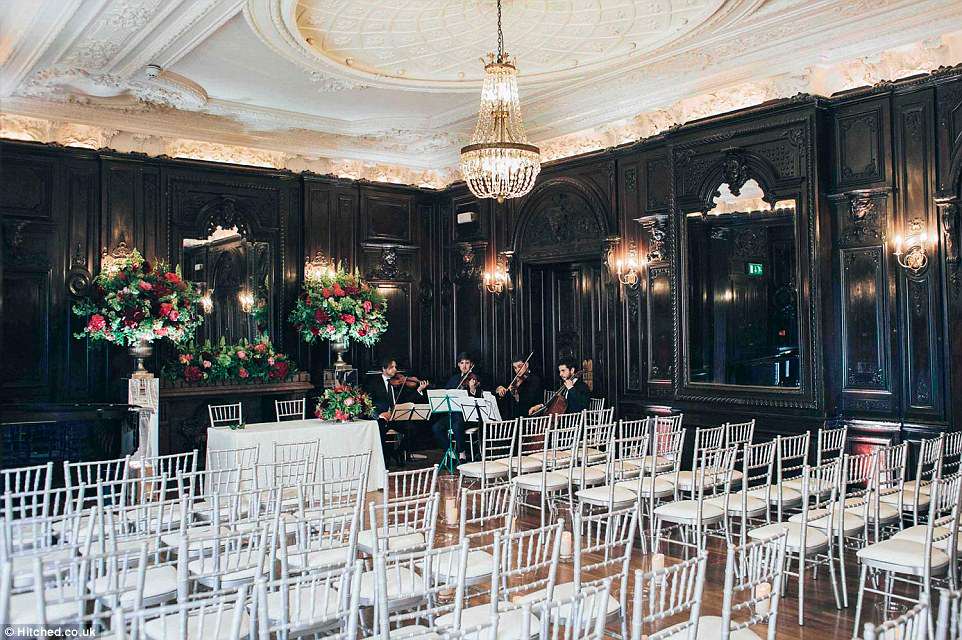 This magnificent Georgian house in Mayfair can accommodate up to 150 wedding guests. It’s also just a stone’s throw from Buckingham Palace for adding royal effect

Queen Elizabeth I frequently stayed at former royal residence Gosfield Hall, in Essex. It was later loaned to the exiled King Louis XVIII of France and his wife, Queen Marie Josephine Louise of Savoy 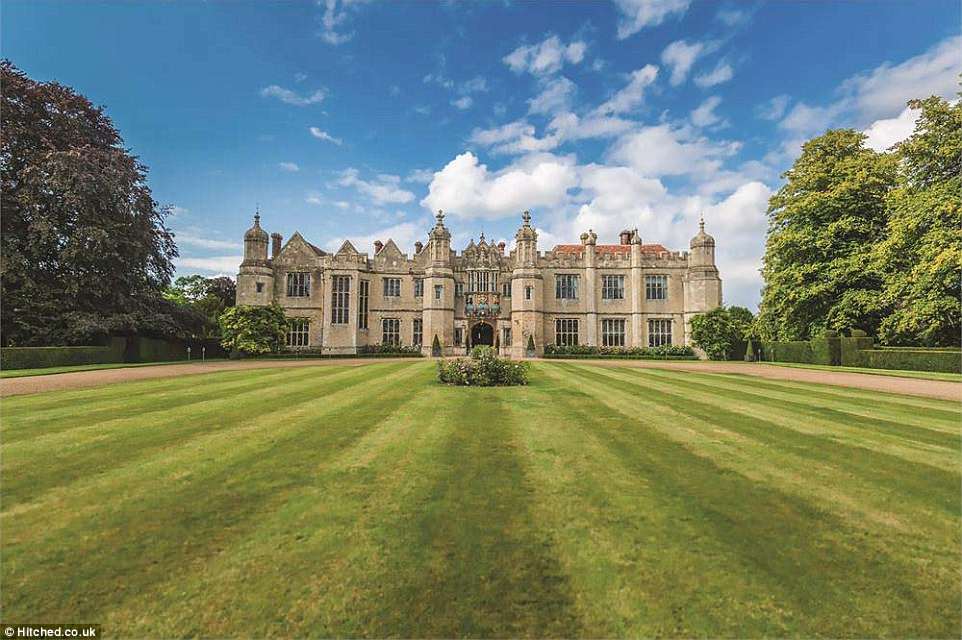 A magnificent Tudor mansion, Hengrave Hall, Suffolk was built in 1525, and played host to Elizabeth 1 in August 1578 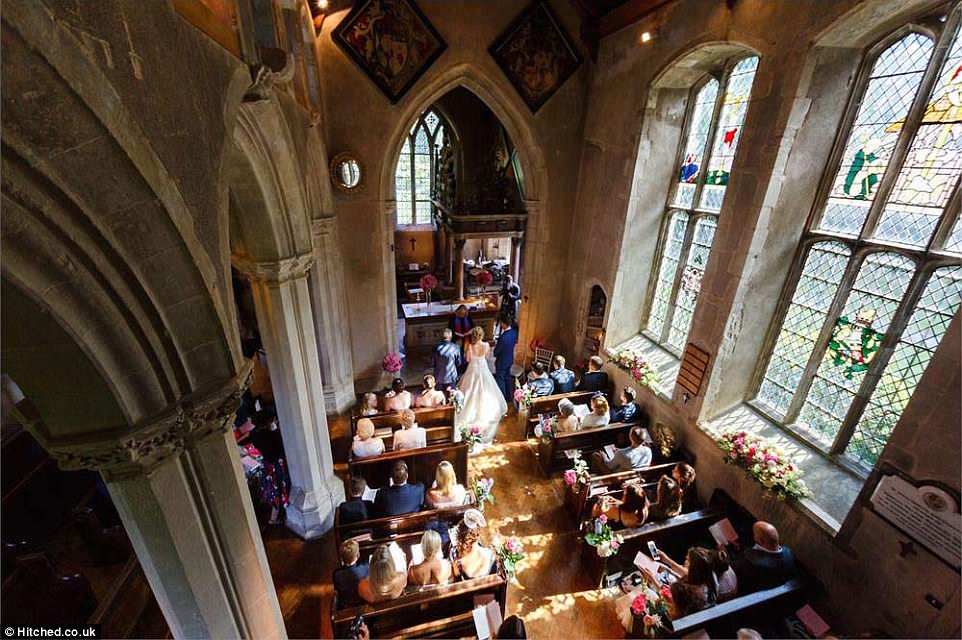 King James I was also a frequent visitor to Hengrave Hall in the 1670s. It was the seat of the Kitson and Gage families 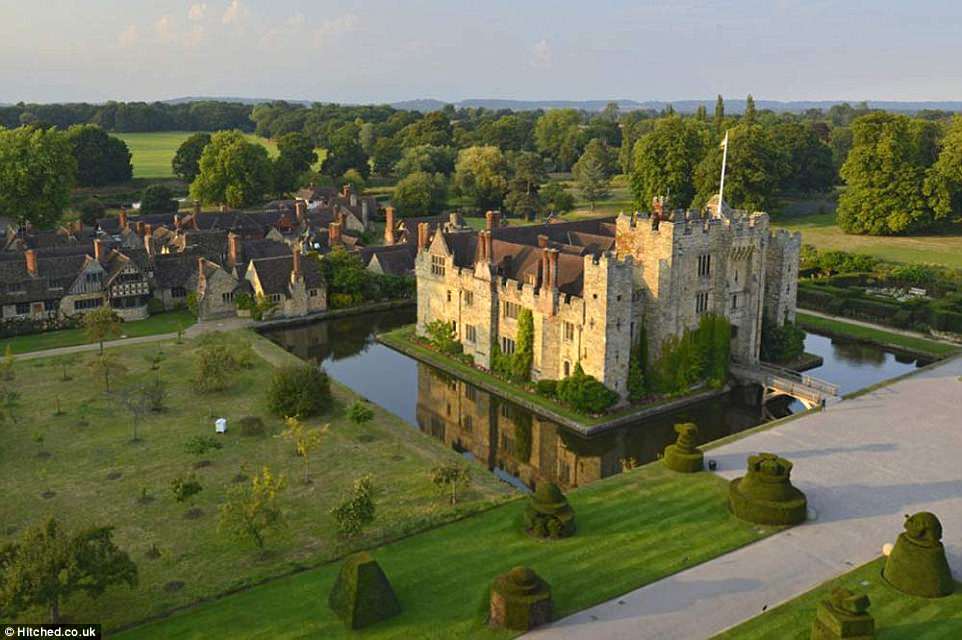 Hever Castle, in Kent, was the childhood home of Anne Boleyn, who became one of the six wives of King Henry VIII 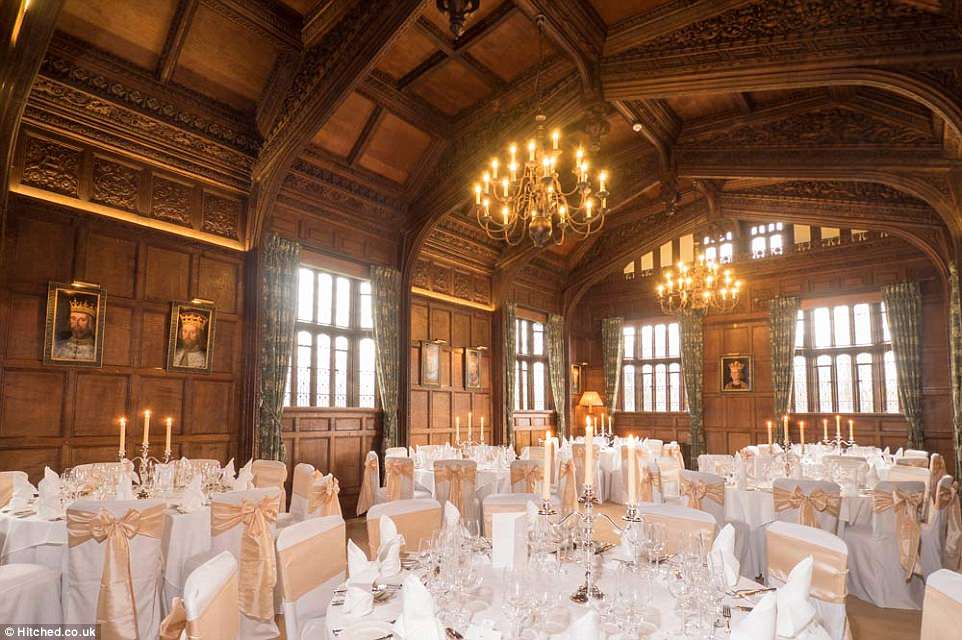 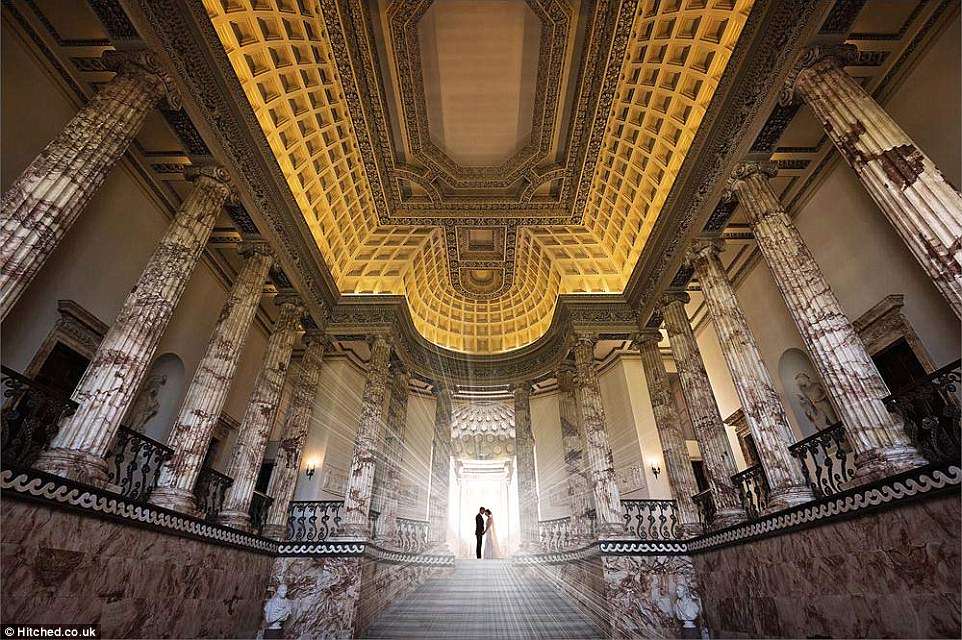 Based on the dramatic architecture of the Roman Pantheon, the marble hall at Holkham Hall can seat up to 170 guests, while the Temple is a more intimate venue, accommodating 25 guests. The dramatic venue was built by the 1st Earl of Leicester 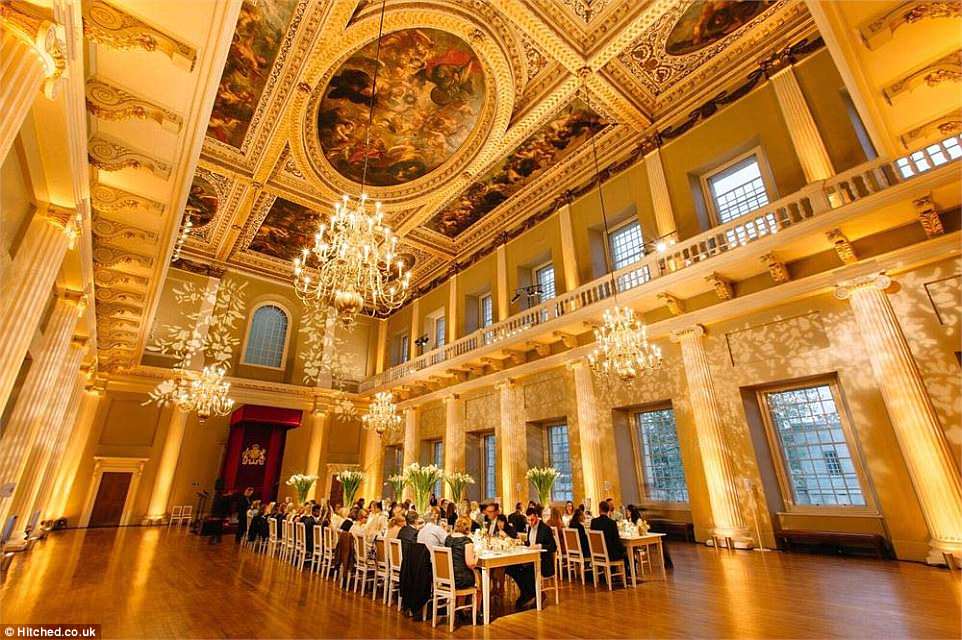 Stuart kings once danced and dined in the atmospheric Undercroft at London’s Banqueting House, which is just moments away from the Houses of Parliament 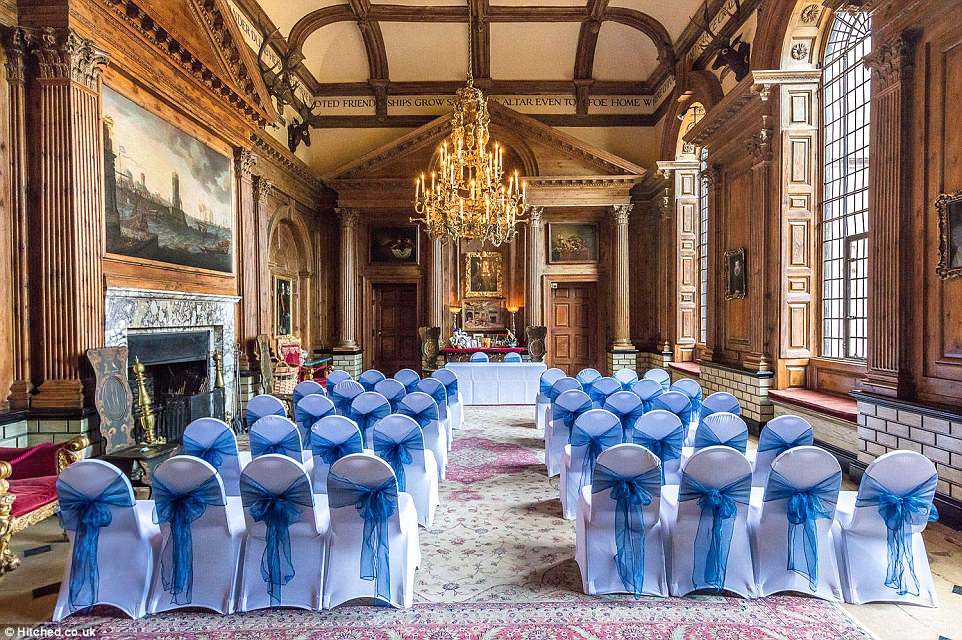 There’s royalty, and then there’s rock and roll royalty – and Knebworth Hall is perhaps more closely associated with the latter, having famously played host to the biggest gigs in Britpop history; Oasis in 1996. The late Gothic manor house also played host to many an aristocratic family over the years 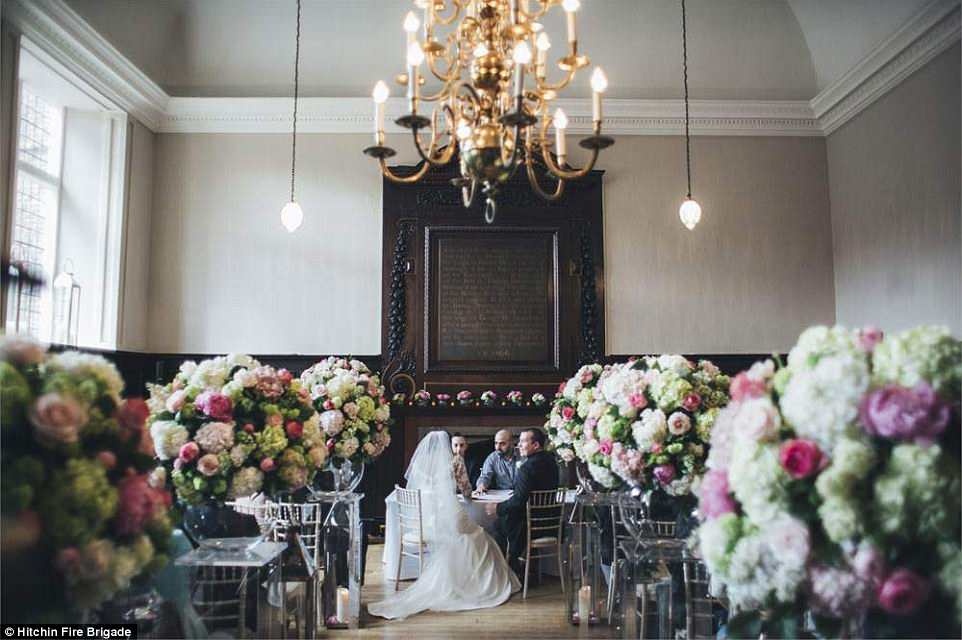 Fulham Palace, West London (pictured) has been home to the Bishop of London for 12 centuries and has strong ties with the royal family.  Equipped for civil ceremonies and blessings, couples can welcome up to 180 guests to ceremonies at the venue 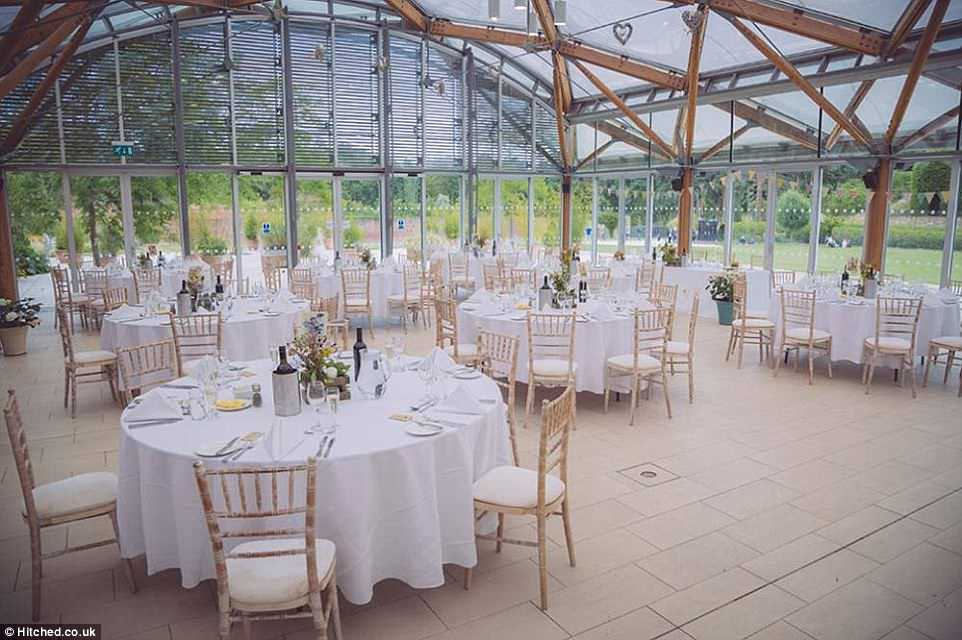 Alnwick Castle was famously the setting for Hogwarts in the Harry Potter movies and has long been a favourite wedding venue among the aristocracy. Brides and grooms can get married in similarly elegant style at the neighbouring Alnwick Gardens 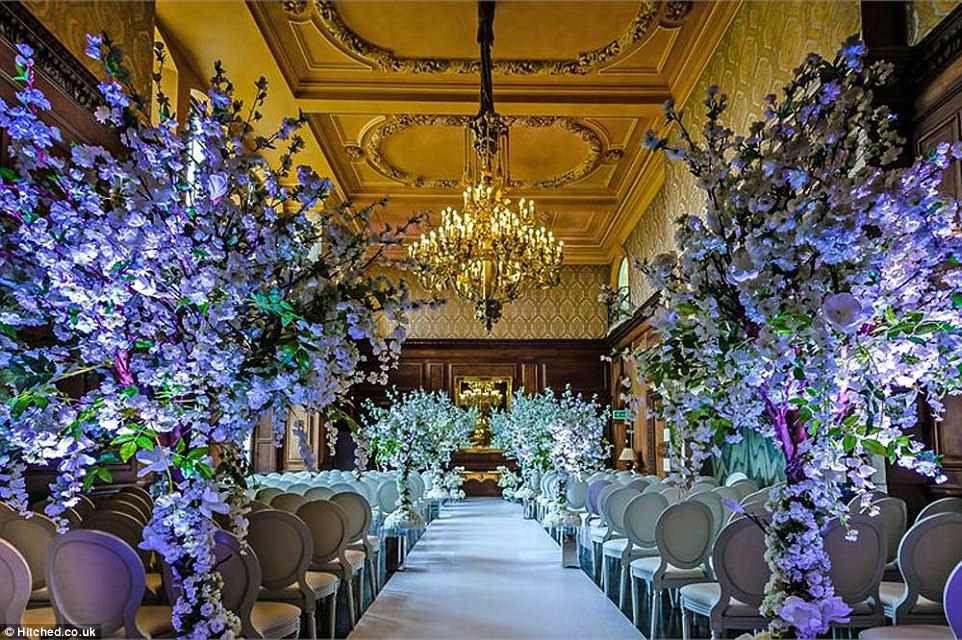 Addington Palace in Surrey is a grand, Grade II listed Georgian mansion that served as a summer residence to six Archbishops of Canterbury 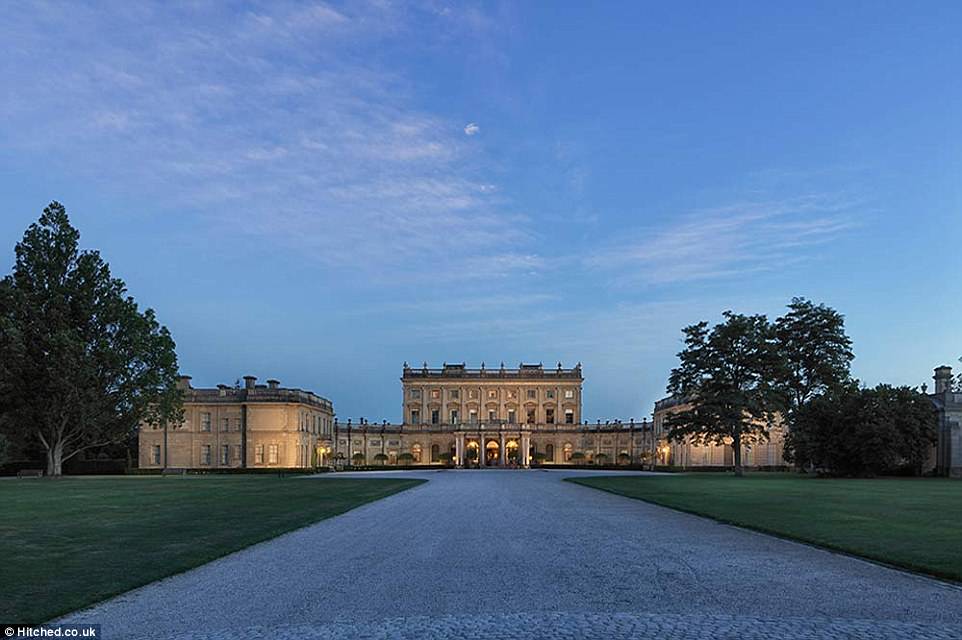 Over the years, Cliveden House in Berkshire has been home to earls, dukes, countesses, and a Prince of Wales 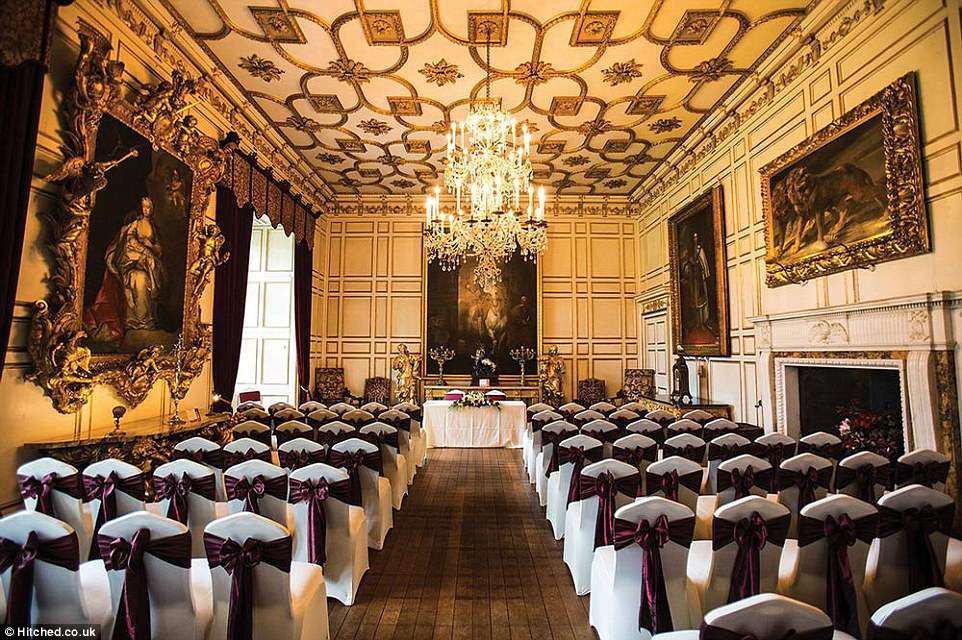 Warwick Castle was built by William the Conqueror in 1068. After being used as a stronghold, it was gifted to the Greville family by James I 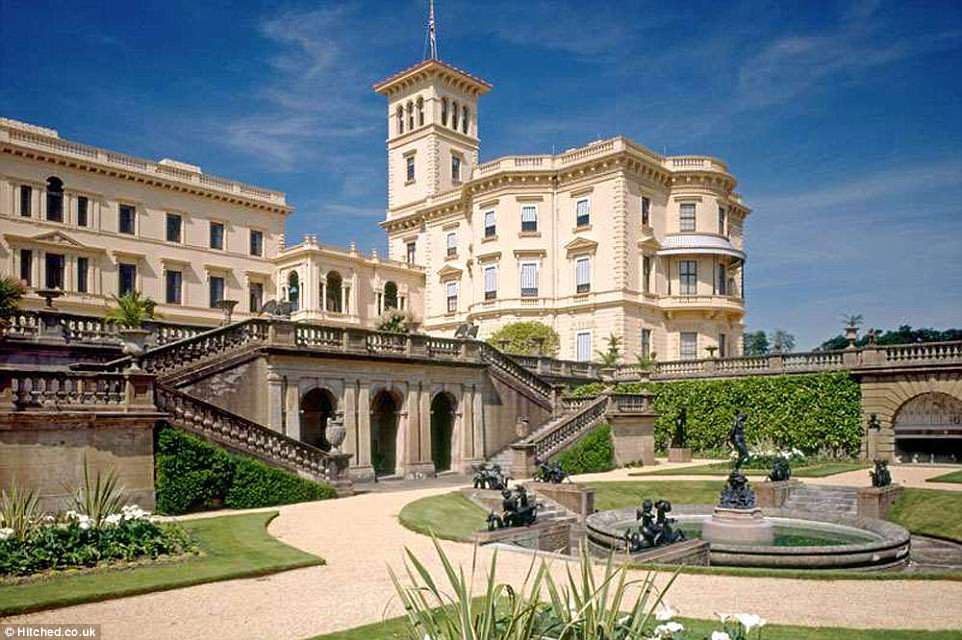 Osborne House, on the Isle Of Wight, was a residence of Queen Victoria and Prince Albert. King George V and Queen Mary also stayed in the Grand Suite on their honeymoon 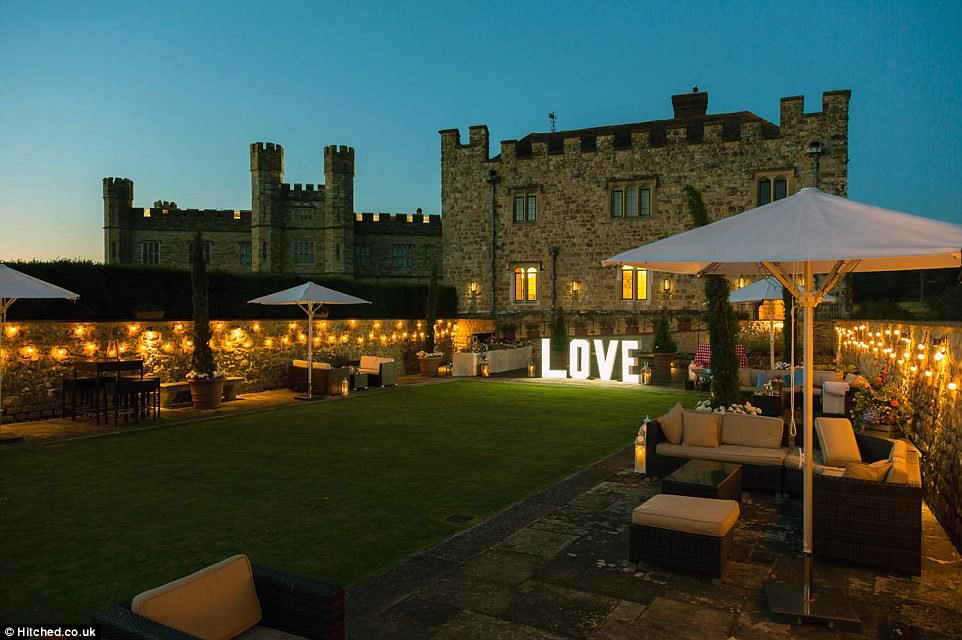 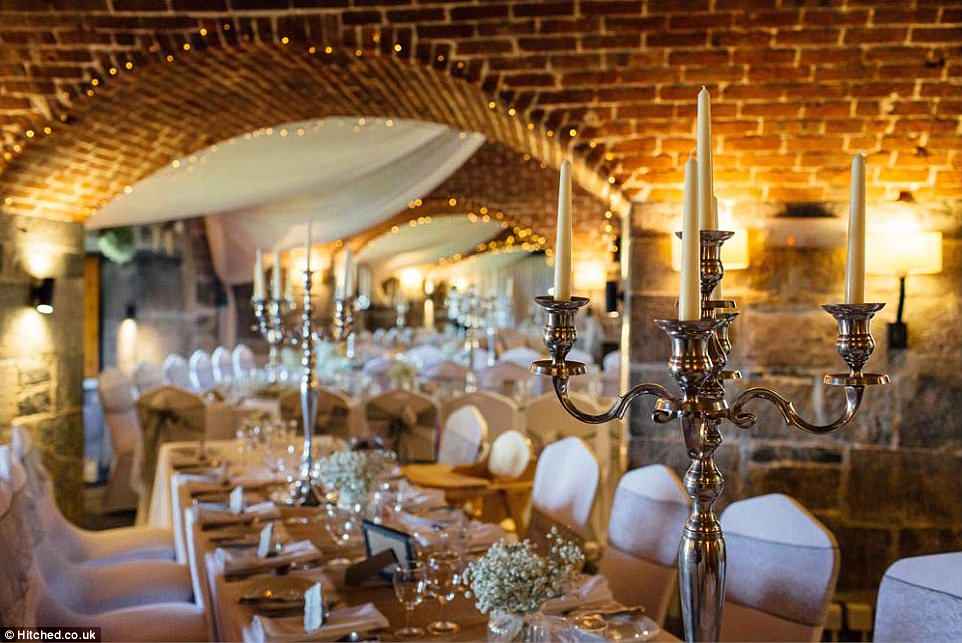 One of the most romantic venues in the UK, the stunning Polhawn Fort offers spectacular views of the English channel – as well as history that dates back to the Napoleonic Wars 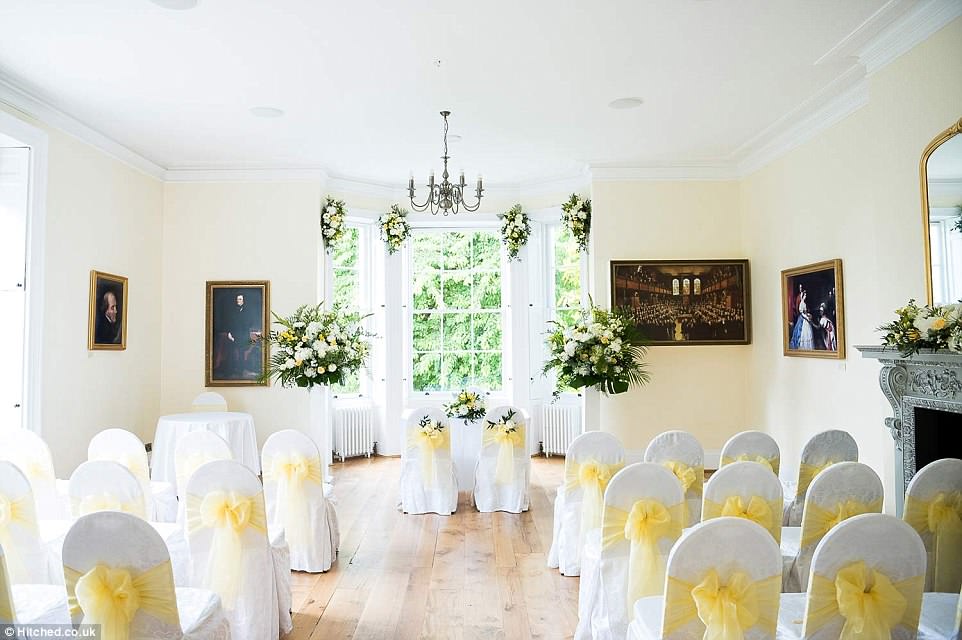 Georgian mansion Pembroke Lodge is located in the largest of the Royal Parks, where the Queen’s deer roam on the grass