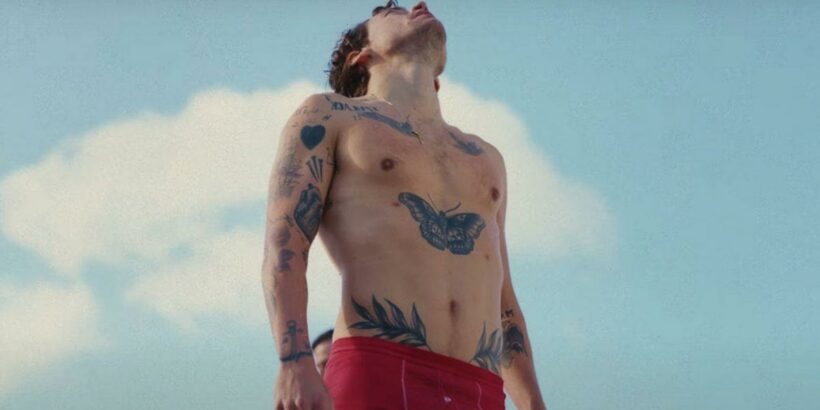 After last releasing new music in 2019,Harry Styles has dropped a new music video for his latest single As It Was.

In the arty video, the 28 old year heartthrob can be seen showing off his tattooed torso as he dances around London in a pair of red boxers.

As a result, the video has got people talking about the star’s impressive tattoo collection.

According to Page Six,the former One Direction star has over 50 pieces of ink on his body.

In fact,during an interview with James Corden, Harry even revealed that he’d given himself his own tattoo.

So, here’s everything we know about the Watermelon Sugar singer’s tattoos…

Clearly a fan of having tattoos on his chest, Harry has a large butterfly on his sternum. The tattoo, which he got in 2013, reportedly representshis transformation.

Also on his chest, Harry has two swallows just below his collarbone.Speaking to US Weekly, he said: “I like that kind of style of tattoos, like the old sailor kind of tattoos.”

He added: “They symbolize traveling, and we [One Direction] travel a lot!”

Elsewhere, the Dunkirk actor has the words ‘17 BLACK’ tattooed as well as a broken heart with crosses over the letters ‘M’, ‘K’, ‘B’ to representhis grandparents.

Over each collarbone, Harry has the dates ‘1957’ and ‘1967’ to mark the birth years of his parents. Additionally, he has the letters ‘G’ and ‘A’ on each shoulder as a homage to his sister and mum.

Another prominent set of tattoos are fern leaves on his abdomen,allegedly completed to cover up an old tattoo that read ‘might as well’.

The Adore You singer’s arm tattoos

Away from his chest, the Brit award winner has racked up a pretty impressive arm tattoo collection too.

Evidently one to opt for letter-based designs, Harry dons the locations ‘NY’, ‘LA’, and ‘LDN’ on his left shoulder, indicating where he spends the most time.

Taking prominence on his left arm is a pirate ship tattoo, an anatomical heart, as well as a ‘Late Late’ show tattoo that he received while on James Corden’s talk show.

Several other tattoos on his left limb include the album art for Pink Floyd’s The Dark Side of the Moon, a Green Bay Packers logo and an English cookie that relates to his sister’s name, Gemma.

Not stopping there, more random pieces include Pingu, ‘99p’ and a padlock which was done by Ed Sheeran.

While his left arm may be filled to the brim with inkings, Harry’s right arm is a lot more empty.

Here he has a large eagle tattoo and the name of his grandmother ‘Mary’.

Harry has a few pieces on his legs too, including a tiger’s head on his right thigh.

On his ankles, the performer has the George Michael lyrics ‘Never gonna dance again,” suggesting that the star takes some degree of inspiration from the Careless Whisper singer.

Additionally, he has two screws on his right big toe which is believed to be a One Direction band tattoo about remaining grounded.

While most of Harry’s tattoos can be seen on show, it’s believed that he has a more intimate tattoo on his body.

During a show in Rio de Janeiro in 2014, he pulled down his jeans to reveal the word ‘Brasil’ on his backside.

However, it’s unclear whether the inking was written in pen or is an actual inking.

For all the latest celebrity news, sign up to our daily newsletter here.