Journey is Fox and Green’s third child together, they are also parents to 5-year-old Noah and 4-year-old Bodhi. Green, who starred in Beverly Hills, 90210, also has a 16-year-old son Kassius from his previous relationship with actress Vanessa Marcil. 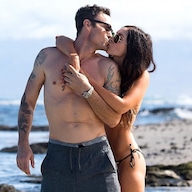 Fox and Green have only shared a handful of photos of their kids on social media. After giving birth to Journey in Aug. 2016, Fox waited a few months before posting a photo of him.

Just days ago, Fox and Green celebrated their eighth wedding anniversary. The duo tied the knot in a secret ceremony at the Four Seasons Resort on Hawaii’s Big Island in June 2010.

The couple has since returned to Hawaii together on a number of occasions, most recently they were spotted packing on the PDA on a getaway in April.