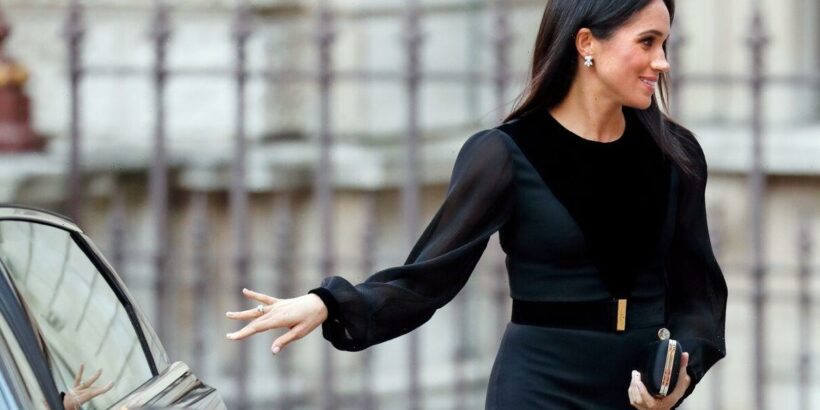 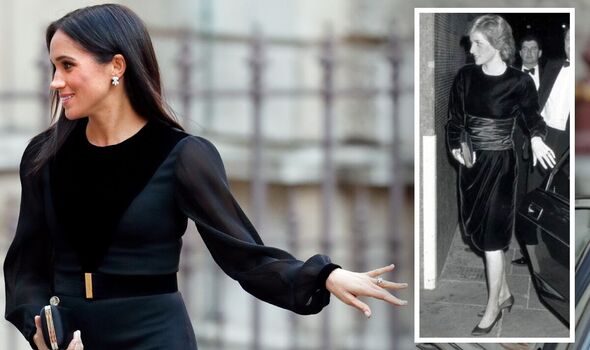 Meghan Markle, 41, has often been compared to the late Diana, Princess of Wales for their torment in the public eye, fashion and similar life experiences. There is an iconic photo of the Duchess of Sussex shutting a car door in September 2018, which some fans compared to an archive picture of Diana.

This is because there is an almost identical photo of the late Princess from 1988 that exists, showing her arriving at the Royal Festival Hall London wearing a very similar black dress.

Judi James, a professional body language expert spoke exclusively to Express.co.uk about whether Meghan modelled her royal persona on Diana, or whether it was just a coincidence.

She claimed: “Meghan was nearly twice Diana’s age when she married Harry and a confident US actress who would have been used to fame and being in the spotlight.

“But even Meghan became vulnerable and this fear of repeating loops clearly horrified Harry.”

According to Judi, Meghan can sometimes cause royal fans to think she is guilty of “conscious mimicry” when it comes to her husband’s late mother.

She suggested: “But, away from emotional and situational echoes of the past, do moments like this, where Meghan has been photographed in a similar outfit and similar pose to Diana, suggest any conscious mimicry or mirroring?

“Diana could easily have been a role model for Meghan in terms of her tactile body language and her warmth, popularity and connection to the public.

“Both women dared to show their emotions in public and both excelled in hugging and more spontaneous behaviours.”

However, Judi argues that Meghan probably wanted to “make the best impression as a UK royal”.

She explained: “As an actress wanting to make the best impression as a UK royal, Diana would understandably have a strong subliminal influence when it came to getting it right.”

The act of “deliberately copying” would actually be “difficult”, the body language expert claimed.

Judi opined: “But deliberately copying actual moments for the camera would be difficult and pretty pointless unless they were formally posed portraits.

“Would the crowds watching Meghan here, most of whom were possibly not even around when Diana was appearing in public, really get the body language similarities in a moment that probably took less than an instant to create, i.e. shutting a car door?

“A photo might freeze a pose in time but that pose would probably have been almost unnoticeably quick in reality.

“Even to ensure you got snapped doing it you’d probably need to hold the moment for several seconds but this looks as though it was taken on the move.

“And although I covered most of Diana’s appearances at the time even I don’t remember seeing this photo of her so copying it deliberately would have been pretty pointless.”

Judi suggests that this moment of similar body language between the two would was “probably just a coincidence”.

She added: “We have two iconic, elegant and high-profile women here and body language like this is probably just a coincidence. Royal women like Kate, Diana and Meghan can tend to hold themselves in similar ways in public because they tend to use similar props like the clutch bag.

“The biggest non-Diana trait here is that extended hand. Meghan’s is held with the extension right out to that erect little finger, like a ballroom dancer.

“It suggests awareness and effort to get the royal elegance right. Diana’s hand is less involved, showing a more relaxed approach to all the camera attention that probably came with time and experience.”