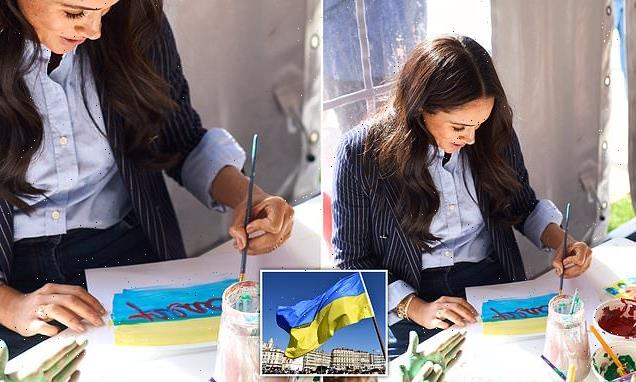 Wrong way up, Meghan! Duchess suffers awkward gaffe as she paints Ukrainian flag upside DOWN in snaps taken by her personal photographer at Invictus Games

The Duchess of Sussex suffered an awkward gaffe over the weekend after she was photographed painting the Ukrainian flag upside down.

In images released yesterday, Meghan Markle, 40, showed off her maternal side when she joined British Invictus Games families at a book reading on Sunday.

In one snap, the mother-of-two could be seen carefully writing the word ‘peace’ onto a yellow and blue painting which, at first glance, appeared to be the Ukrainian flag.

However in an embarrassing blunder, the Duchess had painted the flag upside-down, with her artwork incorrectly showing a horizontal band of yellow above a horizontal blue band.

The national flag of Ukraine features a band of blue positioned above a band of yellow. 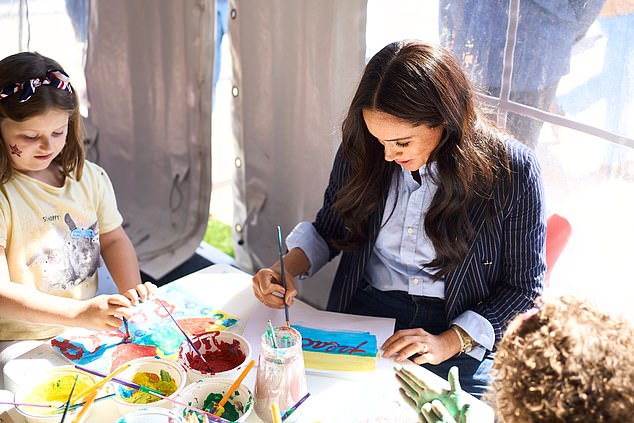 The Duchess of Sussex, 40, suffered an awkward gaffe over the weekend after she was photographed painting the Ukrainian flag upside down

The images, which were released by the British Embassy,  were taken at a private event was held in a tent at the Zuiderpark, where the Invictus Games is being held, on the second day of the event.

The images were taken by her and Prince Harry’s wedding photographer, Chris Allerton.

Fashion photographer Chris also took images from the couple’s secret christening for their son Archie, as well as some of their final engagements as senior members of the royal family.

Meghan’s mistake is particularly poignant given the Duke and Duchess of Sussex have made repeated comments about the Ukrainian crisis at the event and over the last few months. 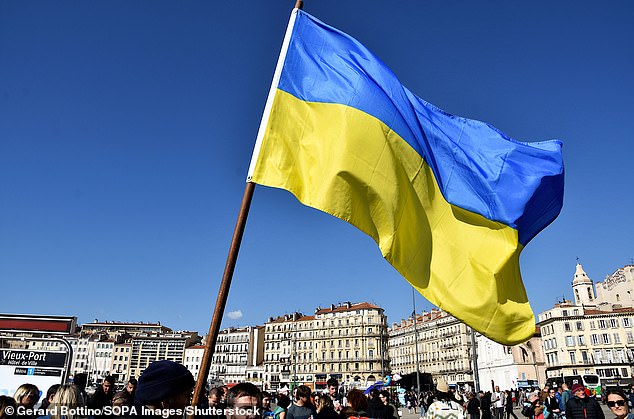 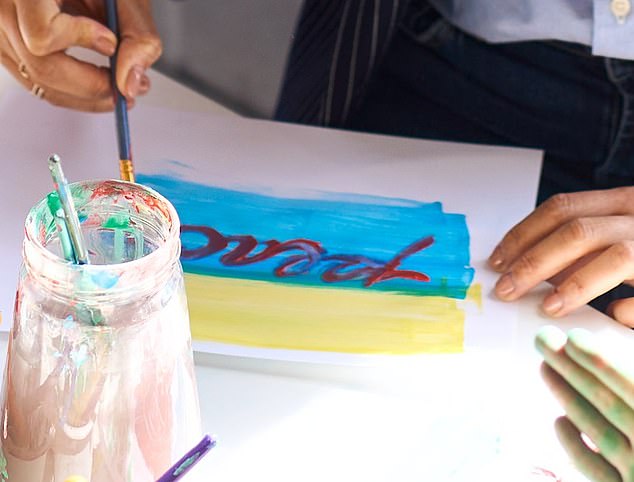 Meghan Markle had apparently painted the flag upside-down, with her artwork incorrectly showing a horizontal band of yellow above a horizontal blue band

Last month, the couple announced they had made donations of an undisclosed amount to charities to support the people of Ukraine.

And at the opening ceremony of the Invictus Games, Prince Harry and Meghan paid tribute to the bravery of the Ukraine team, with the Duchess exclaiming: ‘Slava Ukraini! (Glory to Ukraine!)’.

Meghan, who was invited on stage to speak, said everyone is ‘standing with’ the Ukraine team. She said: ‘Good evening everyone. We are so grateful to the Netherlands for welcoming us and for hosting the Invictus Games.

‘For each team, my husband and I both recognise it’s been a lot to get here, both physically and emotionally. Not least of which for the Ukraine team, who we are all standing with.’ 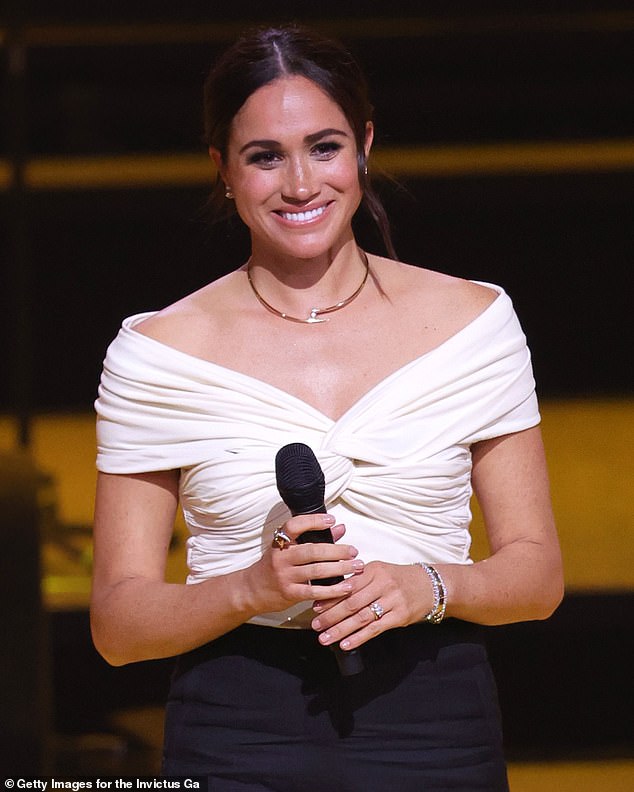 The Ukraine team received a standing ovation and extended round of applause when they arrived for the ceremony at The Hague’s Zuiderpark on Saturday night.

Back home, their country is currently under a brutal invasion by Russian forces, ordered into the country on February 24 by president Vladimir Putin.

A crew has joined Harry and Meghan at the games as part of filming for a Netflix documentary called Heart Of Invictus – a series from Archewell Productions following people who are competing at the event.

The mother-of-two told attendees she had wanted to pop in because she was missing her own children, Archie, two, and Lilibet, 10 months, who remained at home in Montecito, California, while Harry and Meghan jetted off to the UK and the Netherlands.

Maternal Meghan: The Duchess of Sussex cooed over a little boy who was playing with a foam letter at the event. The royal was joined by British competitors’ families and their children to hear a reading of Hairy Maclary from Donaldson’s Dairy

Intent: The Duchess of Sussex leaned in to speak to one little boy who joined the families at the Invictus Games event on Sunday

The Duchess, who wore a pinstripe blazer and £455 Manolo Blahnik heels, sat crossed legged on the floor alongside other parents and family members to listen to veteran James Stride read children’s book Hairy Maclary from Donaldson’s Dairy, which she revealed is a favourite at home.

The couple’s first trip to Europe is understood to be the longest they have been apart from their children, who stayed behind at the Sussexes’ £11million home in Montecito, California.

Meghan returned home on Monday but Harry will remain at the Invictus Games, which he founded, until the end of the week.