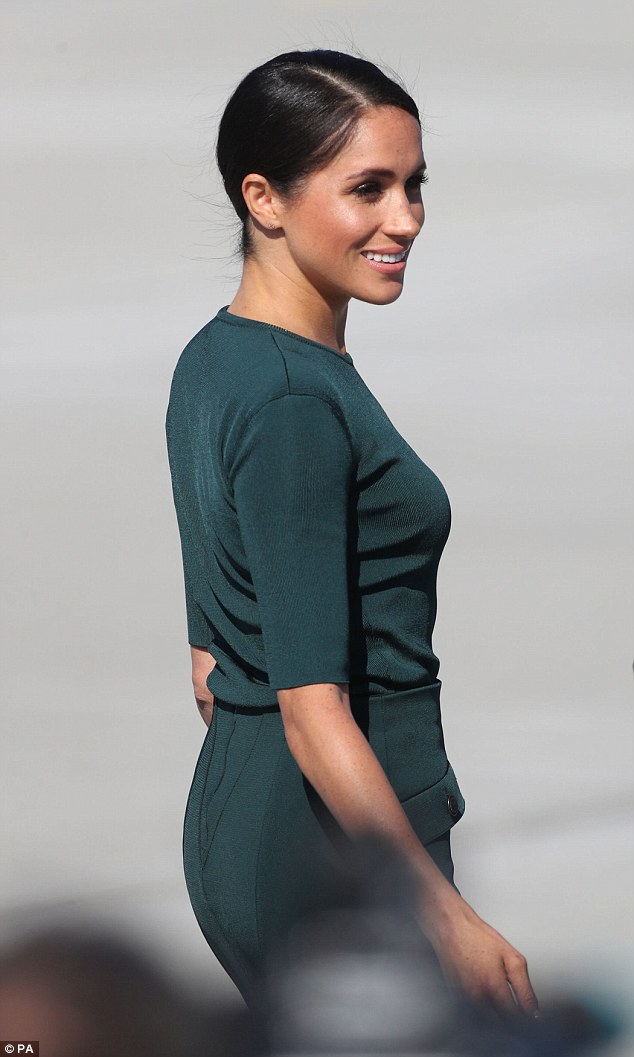 Stepping off the place in Dublin for her first official overseas visit with Harry, Meghan showed off a neat side bun with a centre parting 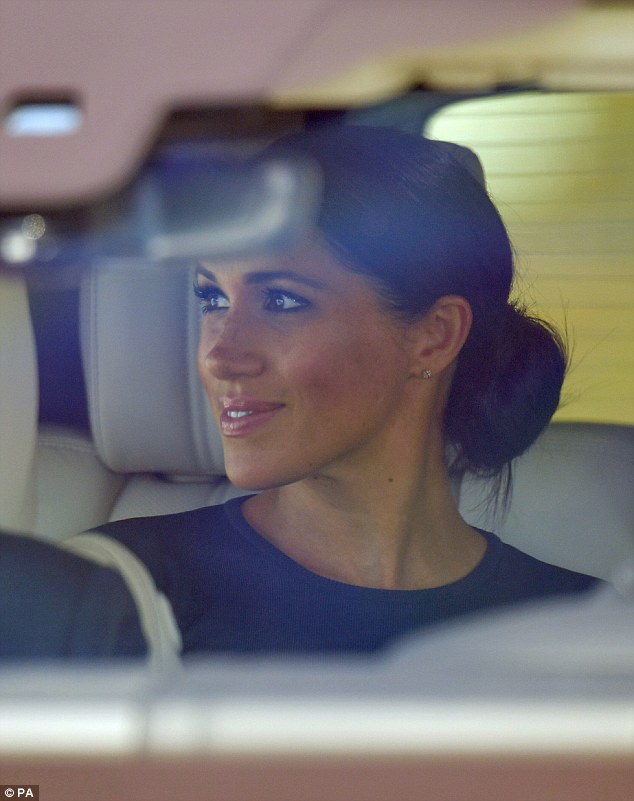 Meghan opted for a side bun for her visit, a new twist on the look she’s made her go-to

The newlyweds are spending two days in Ireland at the request of the UK government, and are set to attend a garden party at the British ambassador’s residence this evening.

Kensington Palace said in a statement that Harry and Meghan would spend their time visiting organisations which are ‘central to Irish life’, including the home of Gaelic football and the country’s most famous university.

The pair will spend the two-day visit immersing themselves in the country’s heritage. 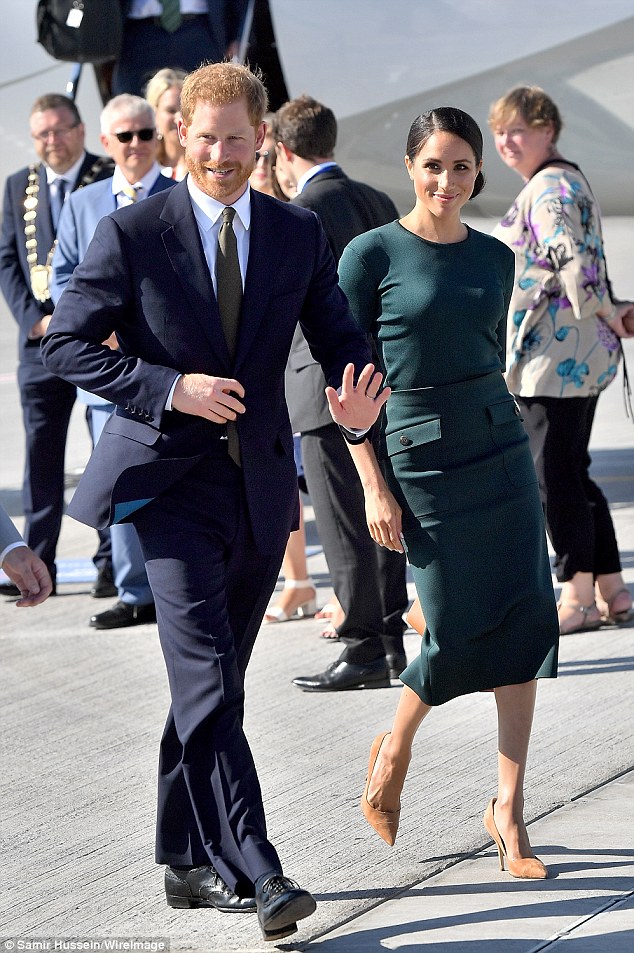 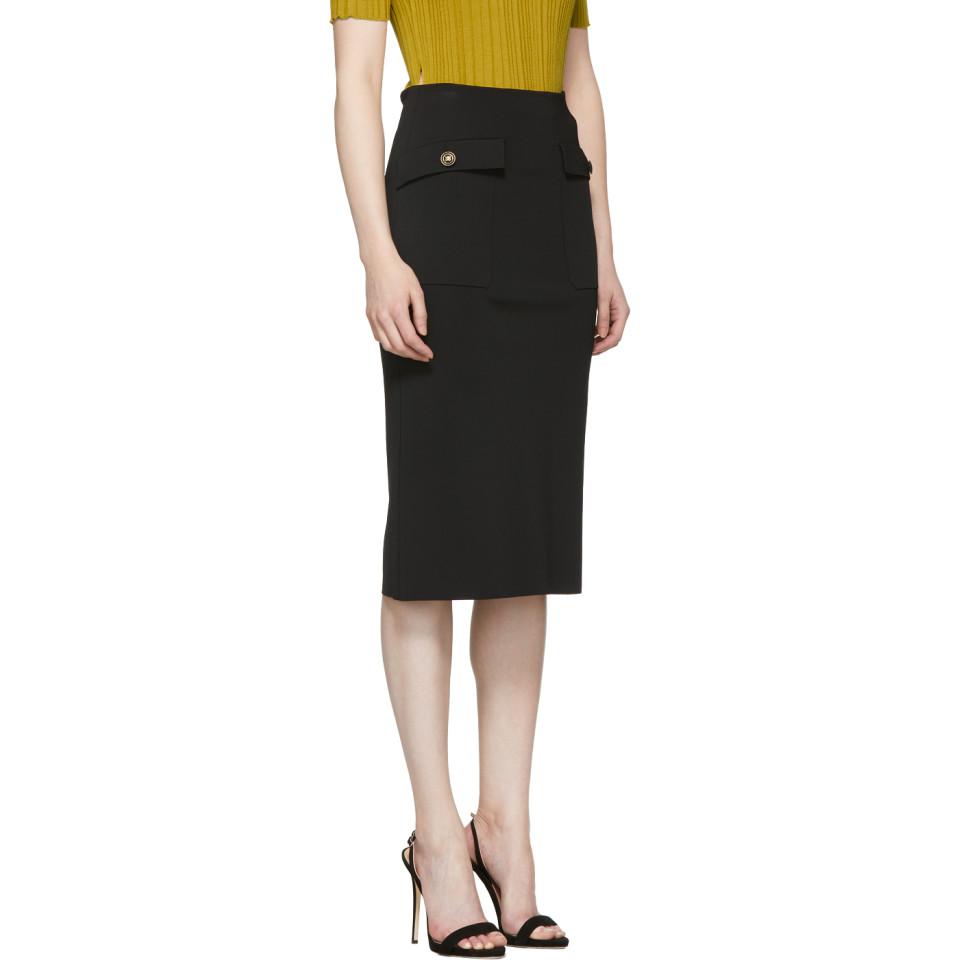 It's been a busy day for The Duchess of Sussex!

First she joined the rest of the royal family to commemorate the 100th anniversary of the Royal Air Force and now she's touched down in Dublin on her first overseas tour with her husband Prince Harry!

Meghan wore a dark navy Dior dress earlier in the day featuring a boat-neck cut, but has now changed into a forest green pencil skirt and matching top.

The stylish set is by Givenchy, who are, of course, the label behind Meghan's iconic wedding dress.

We love the gorgeous green shade that is very fitting for their visit. The flap-front pockets of the skirt add a stylish detail, and Meghan has accessorized perfectly with tan shoes and a tote by her favorite go-to accessories label, Strathberry.

You can shop Meghan's bag in the edit below, plus go green like the Duchess with the super similar pencil skirts from McQueen, Versace and Mariuccia. 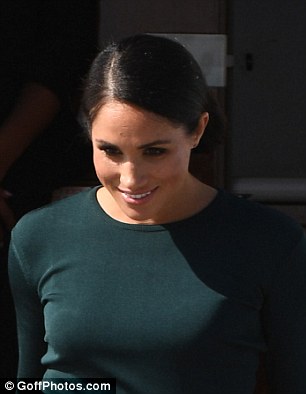 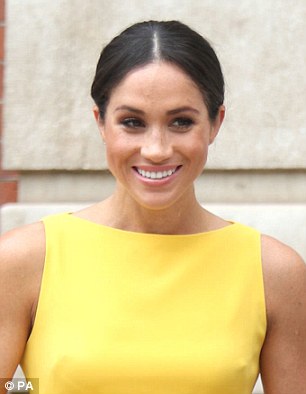 The Duchess wore her hair in a neat updo with a side parting, lending a less severe look to the formal style. She wore her hair in swept back bun with a centre parting to a reception at Marlborough House in London last week 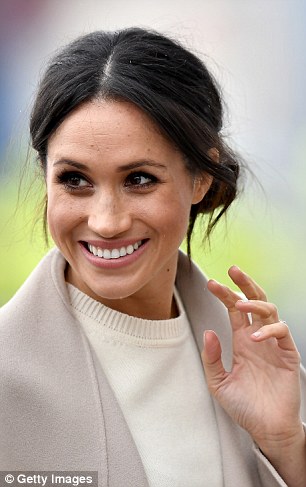 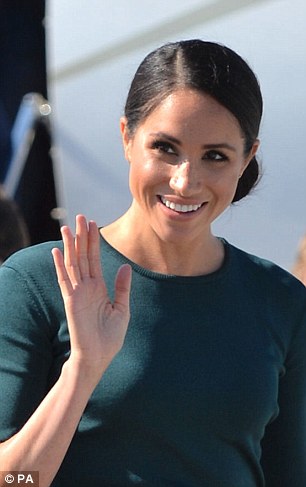 She ditched the messy bun she used to favour, seen here on a visit to Northern Ireland in March (left). But Meghan did mix things up today with a side parting and side bun

The Palace said they will visit the Book of Kells, an illuminated manuscript of the four gospels of the New Testament in Latin, and ‘one of Ireland’s greatest cultural treasures’.

They will also visit the Famine Memorial, EPIC, the Irish Emigration Museum, and Dogpatch Labs, a startup hub in Dublin’s Digital Docklands.

Meghan carried a £495 midi-tote in burgundy, navy and vanilla by the small Scottish brand Strathberry for her first official engagement as Harry’s bride-to-be back in November.

And the stylish bag was later revealed to have sold out in just 11 minutes according to the label, launched in 2013.

When Meghan opted for a bottle green Strathberry East/ West mini for her first official visit to Scotland in February – within minutes it was listed as out of stock on the retailer’s website.

Today she showed her support for the brand yet again in Dublin, carrying its Midi Tote in tan leather, costing £475.

Strathberry was founded by couple Guy and Leeanne Hundleby who left their jobs in finance to establish the brand.

The Hundlebys previously revealed sales overall have sky-rocketed by 40 per cent since it emerged that the former actress is a fan. 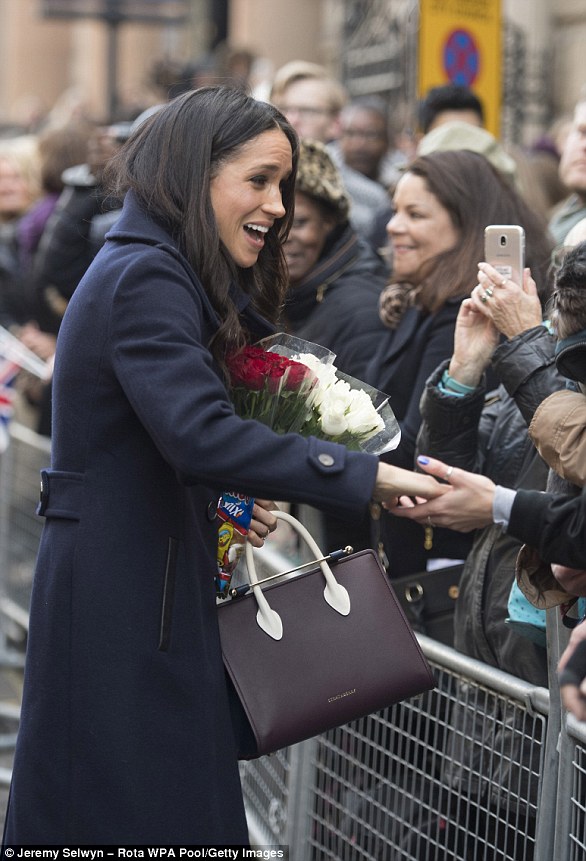 Meghan sparked a sales frenzy when she sported the Strathberry Midi Tote in burgundy, navy and vanilla for her first official engagement with Harry in Nottingham in December 2017 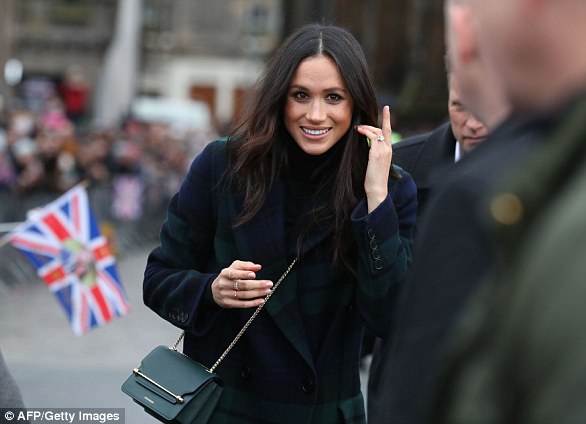 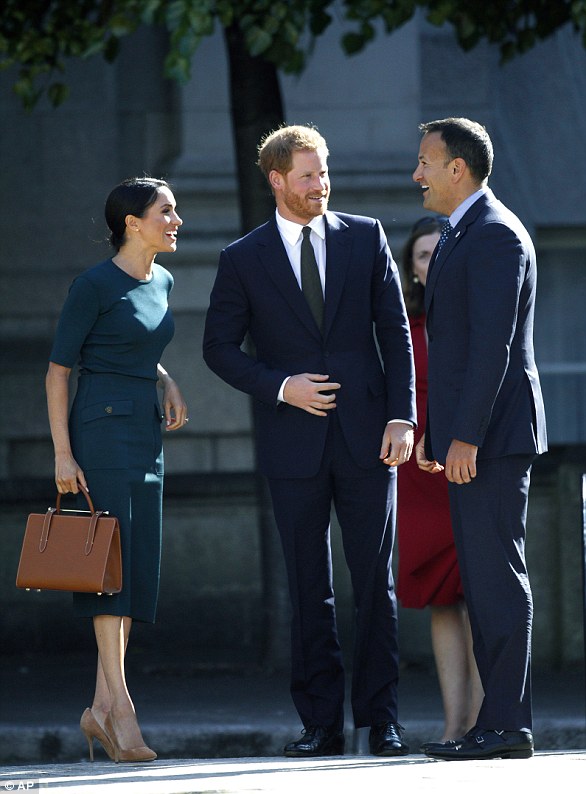 This engagement is likely to be of particular interest to the Duchess, who has been outspoken on the topic of female empowerment.

It’s been a busy time for the newlyweds who kicked off the week by attending Prince Louis’ christening at St James’s Palace on Monday.

Earlier today, they joined fellow members of the royal family for service to mark 100 years of the RAF at Westminster Abbey, followed by a flypast at Buckingham Palace. 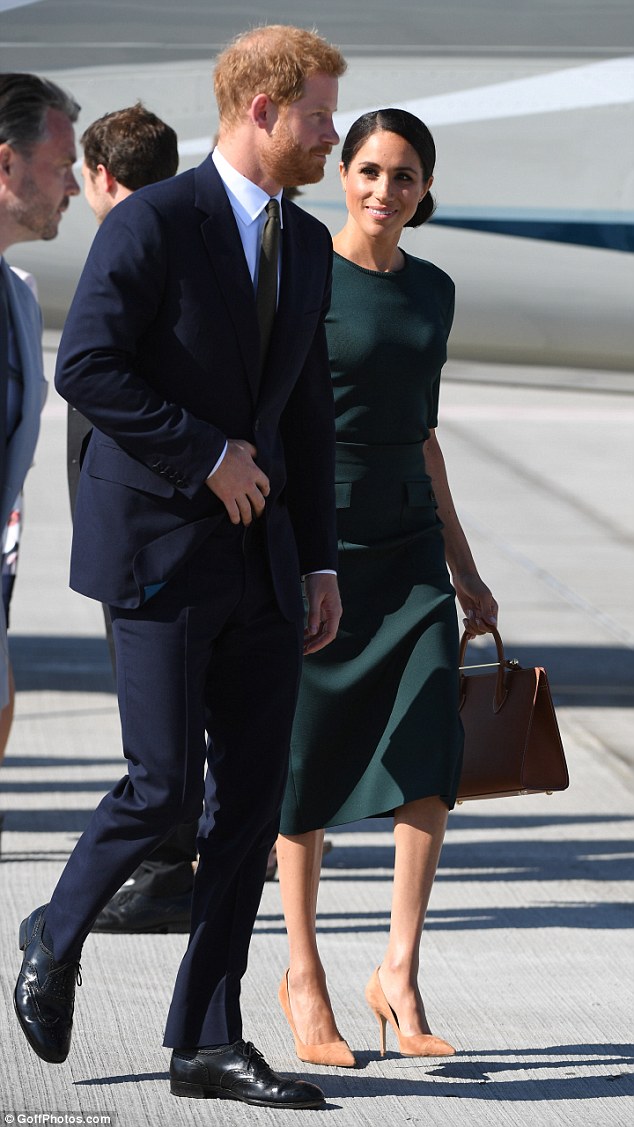 Duke and Duchess of Sussex, 36, were twinning as Meghan wore a forest green dress and Harry donned khaki tie