Melania Trump is a former-model and therefore has graced the pages of a number of fashion magazines.

This includes Vogue. The First Lady was on the cover of the magazine in 2005, after her wedding to Donald Trump.

She wore her John Galliano for Christian Dior dress on the cover.

However, Vogue US editor Anna Wintuor seems to have implied, when asked about the magazine’s not partisan approach, that Melania would not be on the cover of the magazine again any time in the near future.

This is despite the fact that Michlle Obama was on cover of the magazine three times when her husband was president.

The magazine has also had Hillary Clinton on the cover while her husband was president.

Speaking on these women, Anna said: “Obviously these are women that we feel are icons and inspiring to women from a global perspective. “I also feel even more strongly now that this is not a time to try — and I think one has to be fair, one has to look at all sides — but I don’t think it’s a moment not to take a stand.”

Melania was soon to respond via her spokesperson.

Stephanie Grisham said: “To be on the cover of Vogue doesn’t define Mrs. Trump, she’s been there, done that long before she was First Lady.

“Her role as First Lady of the United States and all that she does is much more important than some superficial photo shoot and cover.” 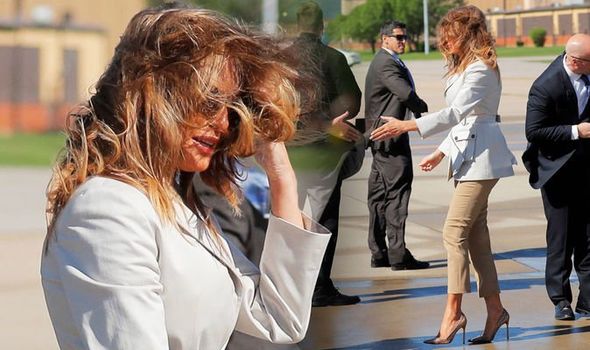 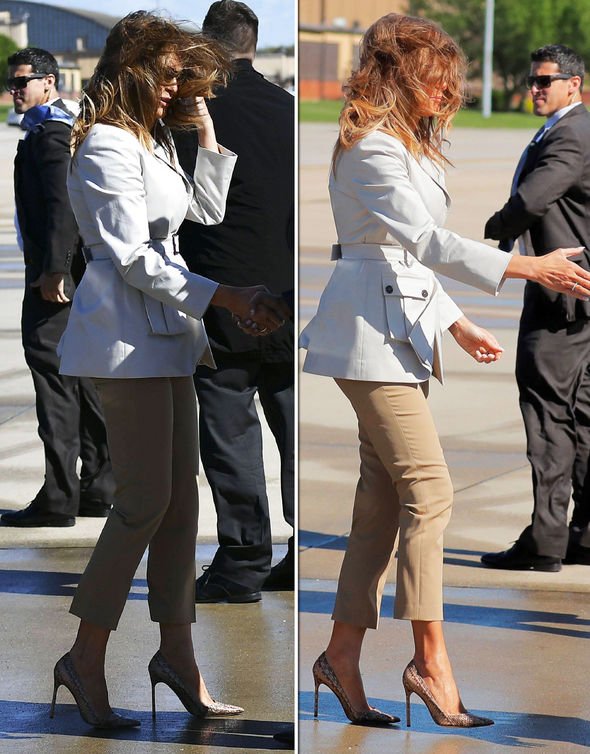 Putting the incident behind her, Melania is heading to Fort Bragg at Joint Base Andrews in Maryland.

She wore beige trousers in a cigarette-shape style. On her feet she wore towering python-skin shoes.

She wore a white jacket with a tie around the waist and large pockets.

The extreme winds got the best of Melania’s hair, as it whipped around her head.

Another Truimp who has graced fashion magazines is Donald’s daughter Ivanka. 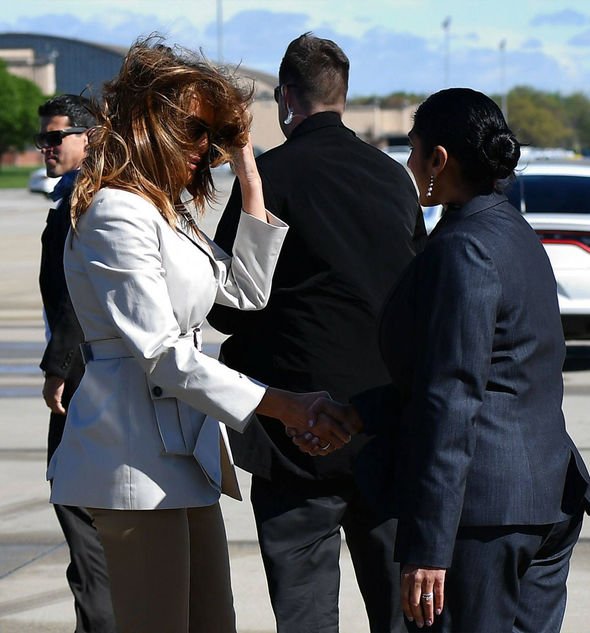 She posed on the front cover of Harper’s Bazaar, Town & Country, Marie Claire and others.

There’s a large age gap between the former businesswoman and her husband Donald Trump, who is 72.

But there’s a far smaller gap between the First Lady and Donald’s eldest child Donald Trump Jr, who is 41.

Recently, Ivanka’s mother, Ivana Trump, 70, spoke out about the relationship between the First Lady and the adviser to the US President.

Mum-of-one Melania can speak more languages than any other First Lady before her: English, French, German, Italian, Serbian and of course her mother tongue, Slovenian.

This also makes her the only First Lady whose first language is not English.

After Jacqueline Kennedy, Melania is the second First Lady who is a practising Catholic.

She met Pope Francis as part of a foreign tour with her husband and stepdaughter Ivanka last year.

Her skills aren’t confined to print, and she appeared in a commercial for Aflac, an American insurance company, in 2005.

Melania’s parents are Amalija Knavs and Viktor Knavs, and the couple live together in Washington.

She has one sister, Ines, who is reported to live in New York and work as an artist.

On May 7 2018, Melania launched her flagship campaign as First Lady, BE BEST, which The White House describes as “an awareness campaign focused entirely around the well-being of children”.

There are three main strands to the initiative: well-being, social media, and opioid abuse.