This hilarious social media gallery showcases the men who simply had enough while accompanying their partners on lengthy shopping sprees.

The pictures, compiled on photo sharing site Bored Panda, show groups of hapless husbands and boyfriends looking desolate as they kill time while their other halves try on clothes.

Some made the most of display chairs and beds in furniture stores, settling in for a quick power nap while their partners browsed.

Others resorted to creating make-shift beds, with one man spotted sleeping precariously on the ledge of a water feature.

Whether laden with their wives’ shopping bags, or slumped in the corner of a department store, we take a look at the men who deserve to be in the running for the most patient husband of the year award… 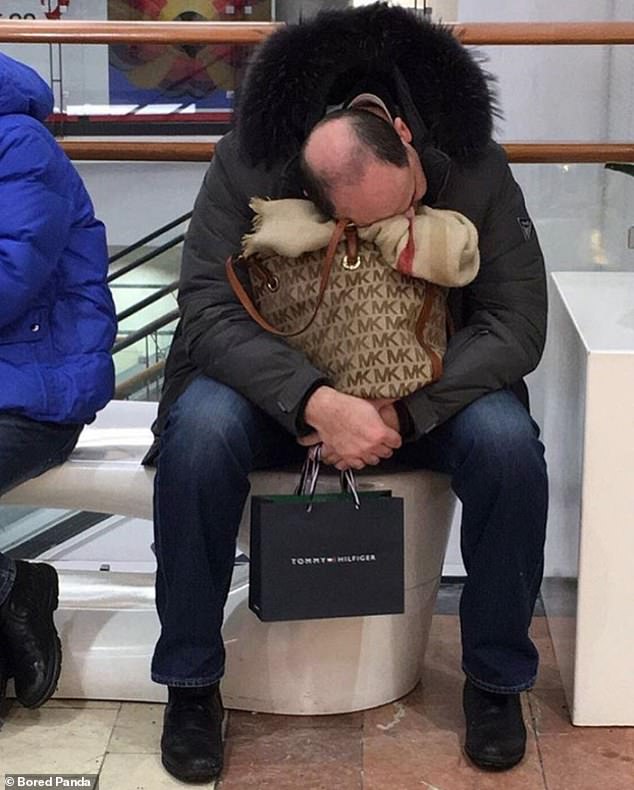 A hilarious gallery has captured the struggle of exasperated men patiently accompanying their wives on lengthy shopping sprees, including this poor fellow who fell asleep clutching his wife’s handbag and shopping bag 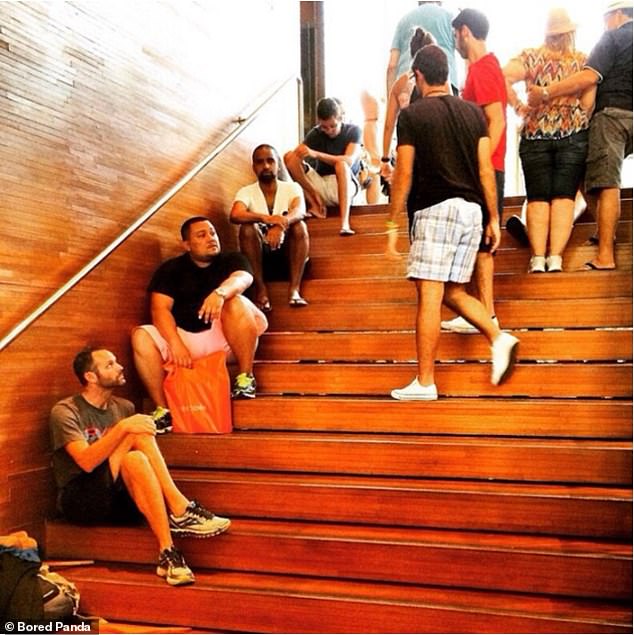 Elsewhere whole groups of hapless husbands were seen looking desolate as they gathered on the stairs of a department store, waiting hopefully for their women to emerge 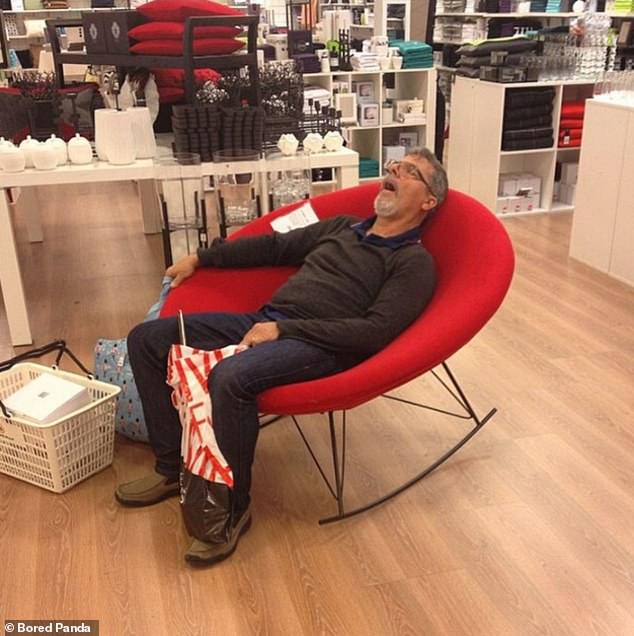 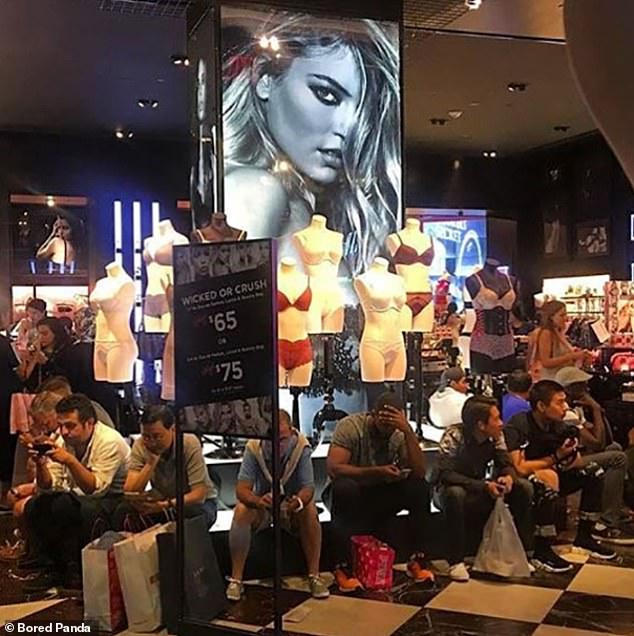 Trapped in lingerie store Victoria’s secret, a whole hoard of frustrated men were seen scrolling on their phones, head in their hands, as they waited next to the semi-clad mannequins 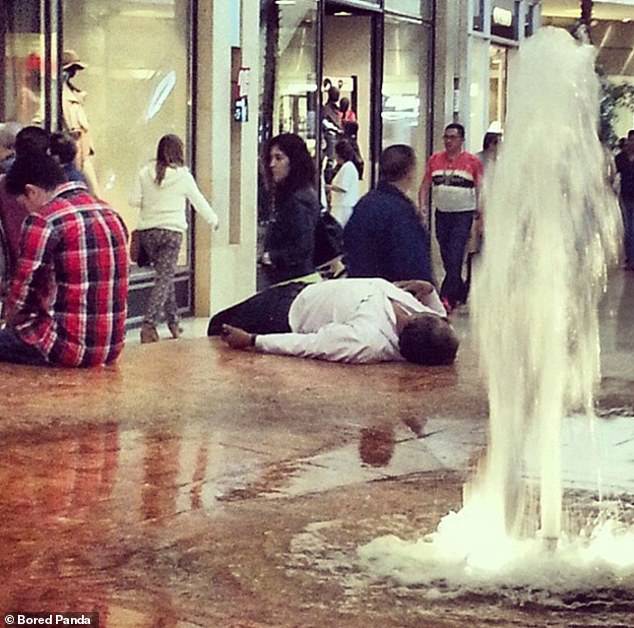 Some hapless husbands have even resorted to creating make-shift beds, with one man spotted sleeping precariously on the ledge of a water feature at a shopping centre 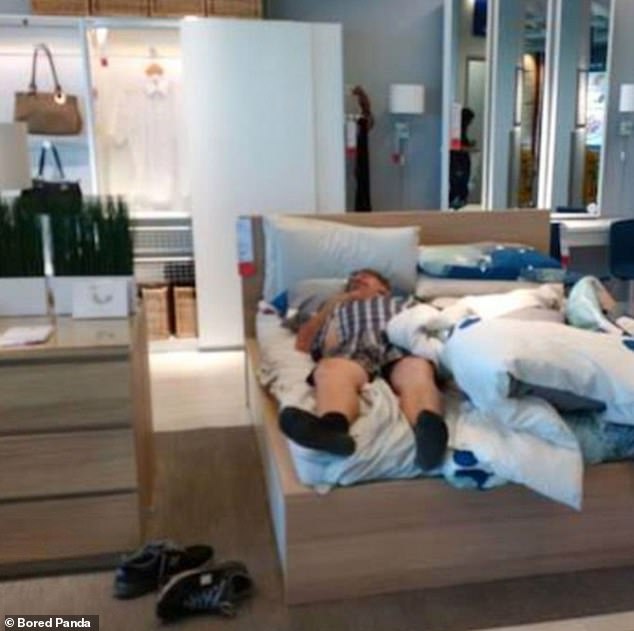 Meanwhile this man made himself right at home, even taking off his shoes and settling down in a showroom bed as his wife looked around the store 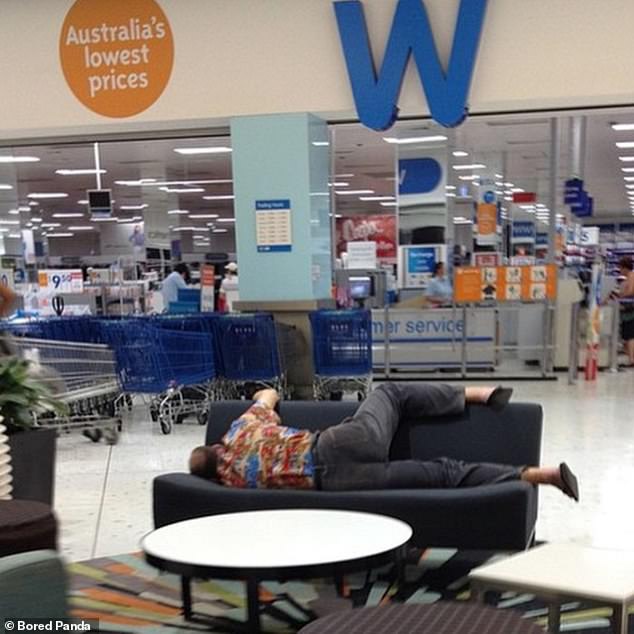 One desperate man was spotted clutching onto a sofa located near a supermarket chain in Australia, as his wife was left to complete the grocery shopping on her own 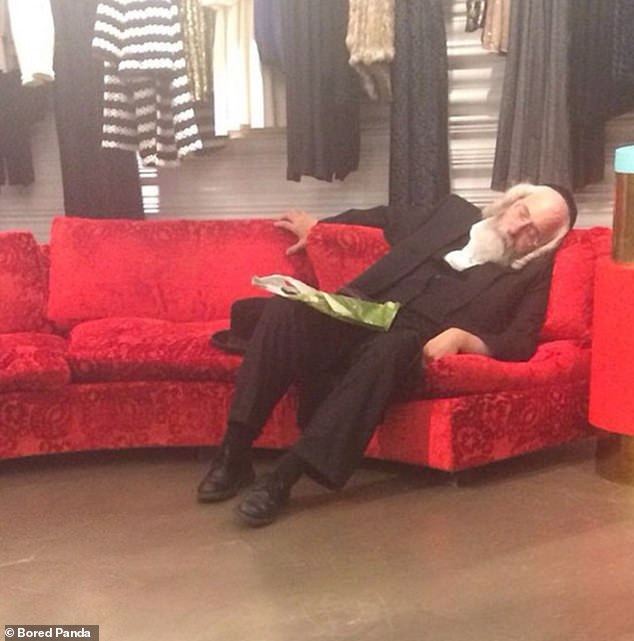 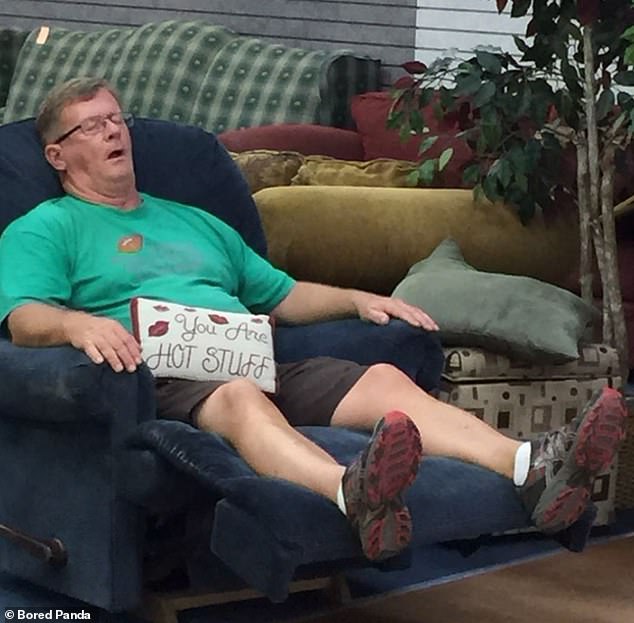 One man clutched onto a pillow emblazoned with the words ‘you are hot stuff’, as he lay, open-mouthed, on a show room sofa waiting hopefully for his wife 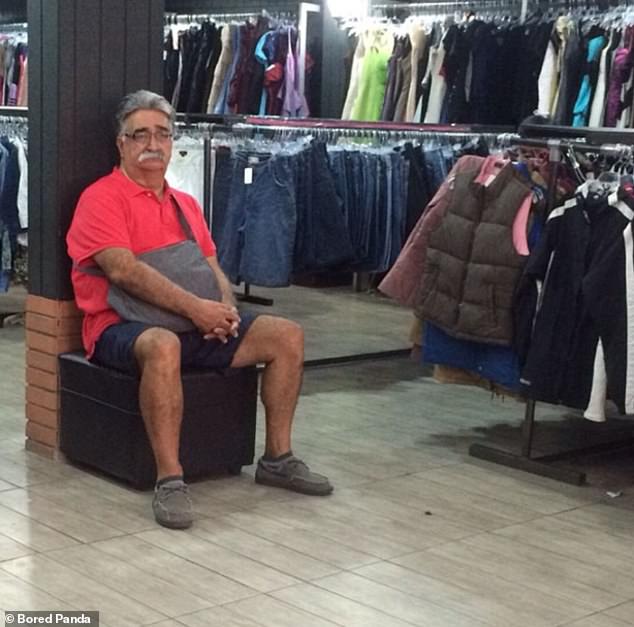 Elsewhere an exasperated man looked as though he had lost all hope in his wife returning from her shopping errands, as he sat alone and desolate in a clothes shop 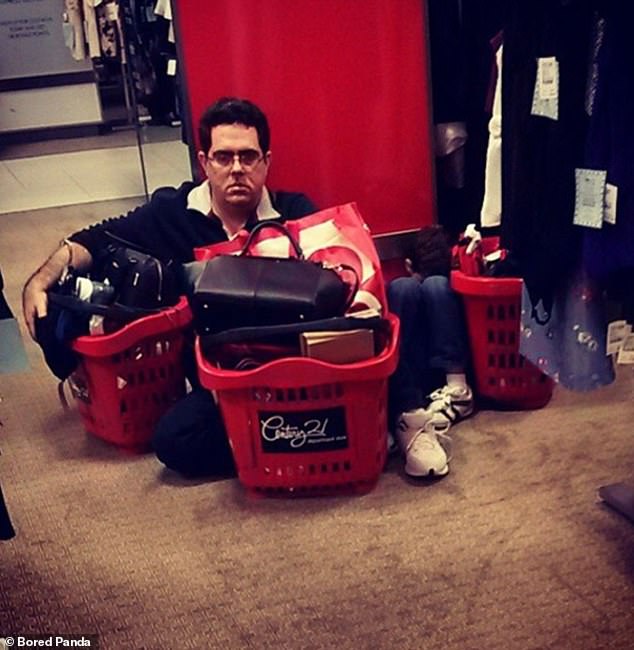 And this angry man looked to be at the end of his tether, as he sat on the floor surrounded by shopping trolleys, with his sleeping son by his side 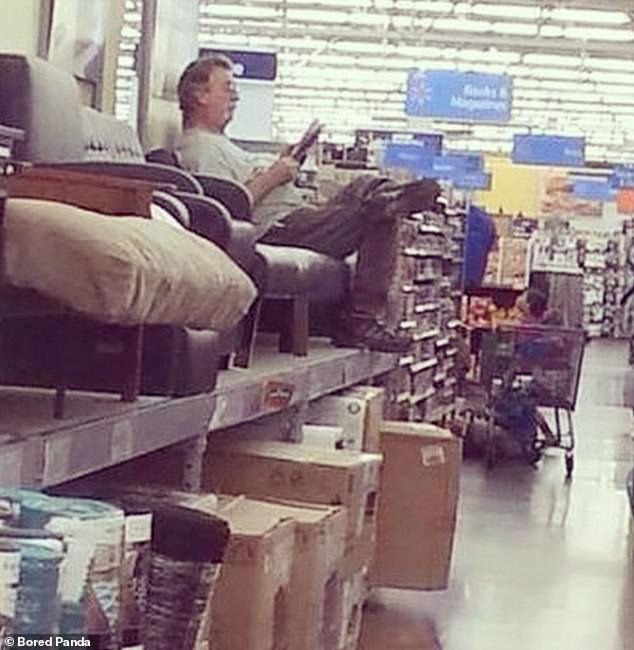 Among the fed up husbands waiting for their wives, one man even resorted to precariously perching atop a chair displayed on a shelf as he made himself at home while his wife shopped 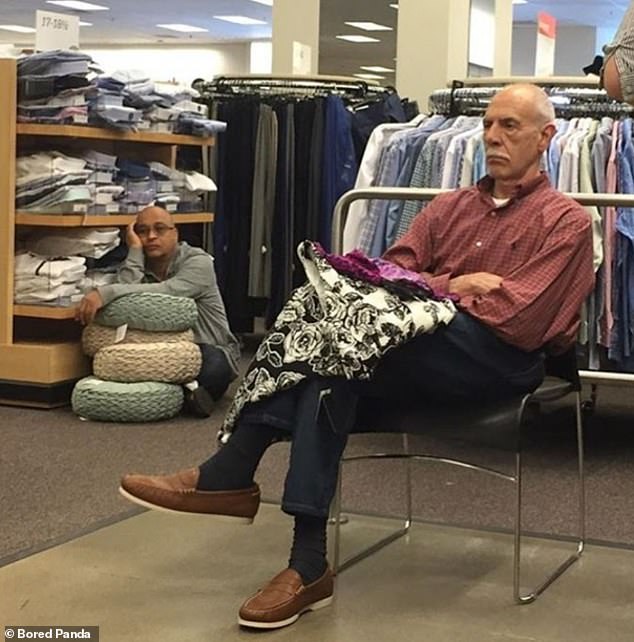 While one arm sat with his arms crossed, laden with shopping, another man appeared to have collapsed on the floor nearby, with only a pile of potential wares as his support 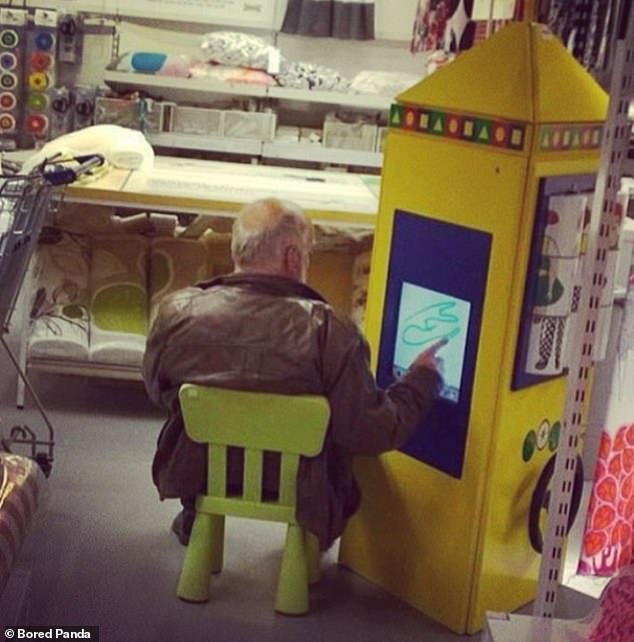 Fed up at the prospect of admiring the sewing goods in a haberdashery, a bored husband perused the children’s entertainment station, listlessly scribbling on the touch screen 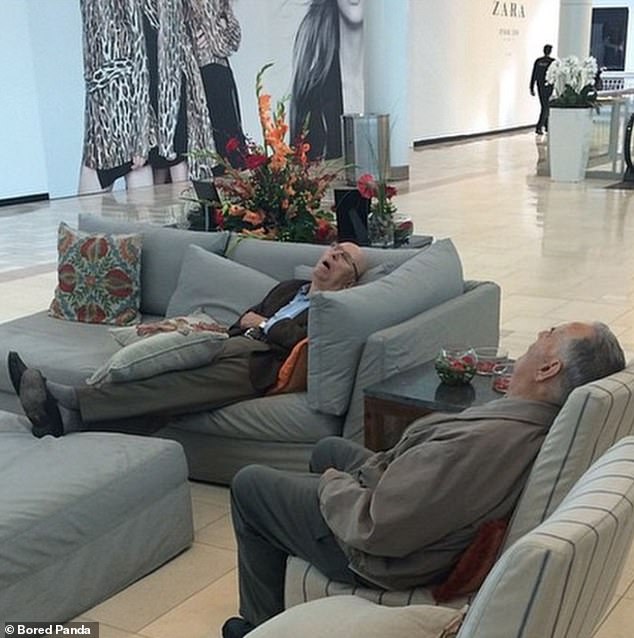 These men took inspiration from each other, falling asleep in a shopping centre as they waited for their wives to return