‘I love those girls’: Michelle Obama praises the Bush twins and Chelsea Clinton and thanks the former first daughters for always supporting her own children Malia and Sasha

Michelle Obama will always love former first daughters Jenna and Barbara Bush and Chelsea Clinton because of their unwavering support of her children, Malia and Sasha.

During her appearance on Good Morning America on Tuesday, the 54-year-old former first lady praised the daughters of former Presidents George W. Bush and Bill Clinton while gushing about Malia, 20, and Sasha, 17.

‘I am so proud of those little girls,’ Michelle said of her children with former President Barack Obama. ‘They have managed this situation with poise and grace, and they are normal and kind and smart and friendly and open. 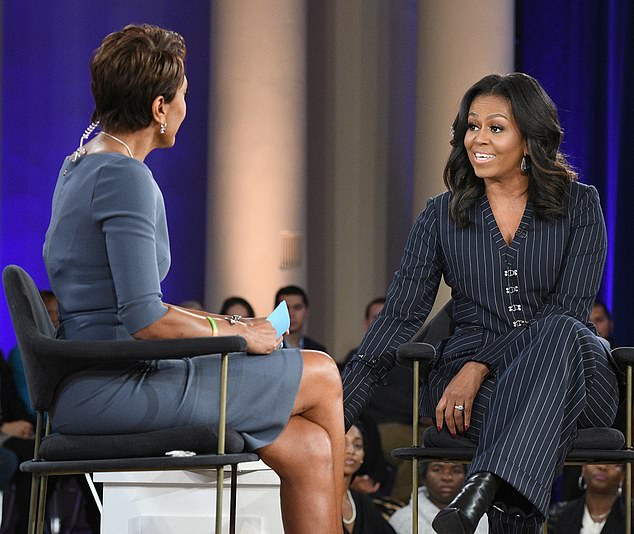 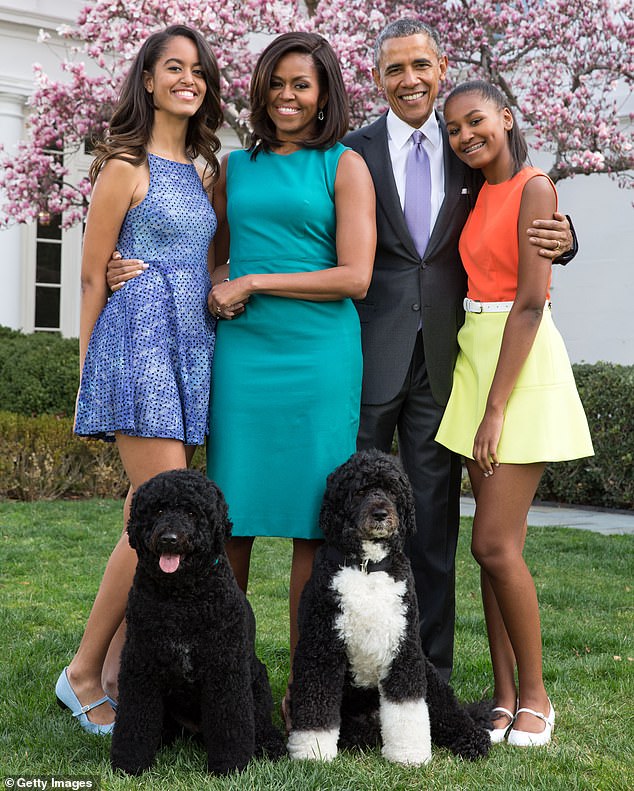 Candid: The former first lady said she will ‘love them forever’ because they always supported her daughters Malia, 20, and Sasha, 17,

‘Gosh, and it could’ve gone so wrong,’ she added. ‘But I will also say that they had support from a lot of the other former first kids ― Jenna and Barbara and Chelsea.

‘I love those girls. I will love them forever for what kind of support they provided to my daughters throughout that. They always had their backs.’

Michelle noted that whenever anyone would ‘go after’ her daughters in the press, Jenna would ‘say something’ and Chelsea would ‘send a tweet out.’

‘That made a big, big difference, so [Malia and Sasha] are doing well,’ Michelle said.

In January 2017, the Bush twins penned a heartfelt letter to Malia and Sasha as they prepared to leave the White House following President Donald Trump’s inauguration. 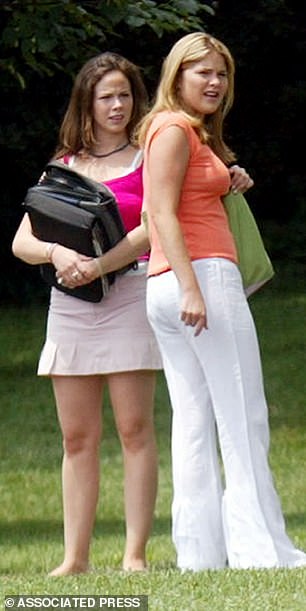 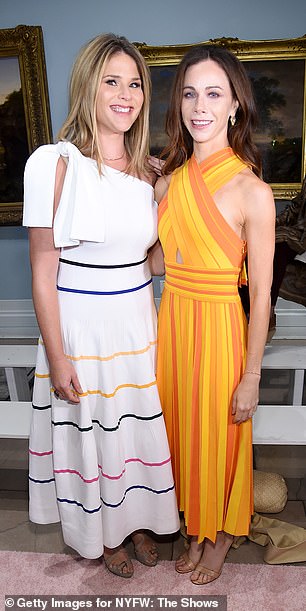 Support system: Barbara and Jenna penned a heartfelt letter to Malia and Sasha as they prepared to leave the White House in 2017. They are pictured in 2004 (L) and in September (R) 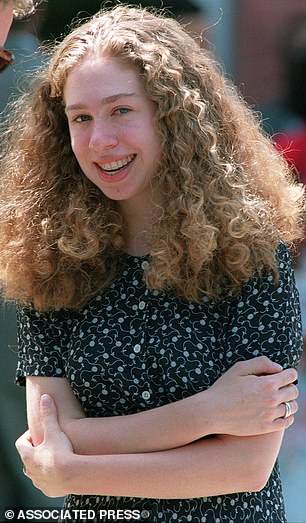 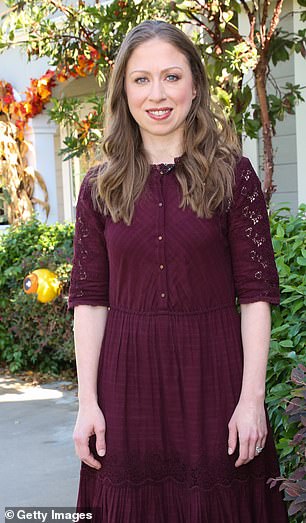 Hitting back: Michelle noted that whenever anyone would ‘go after’ her daughters in the press, Chelsea would ‘send a tweet out.’ Chelsea is pictured in 1995 (L) and in October (R)

In the missive, which was published by Time, 36-year-old Jenna and Barbara offered the Obama sisters advice on how to navigate civilian life.

‘We have watched you grow from girls to impressive young women with grace and ease. And through it all you had each other. Just like we did,’ they wrote.

Later that year, Chelsea, 38, defended Malia after media outlets published leaked videos of the Harvard student smoking and kissing someone at a tailgate party.

‘Malia Obama’s private life, as a young woman, a college student, a private citizen, should not be your clickbait,’ she tweeted. ‘Be better.’

Michelle appeared on Good Morning America on Tuesday as part of her press tour for her new book, Becoming. 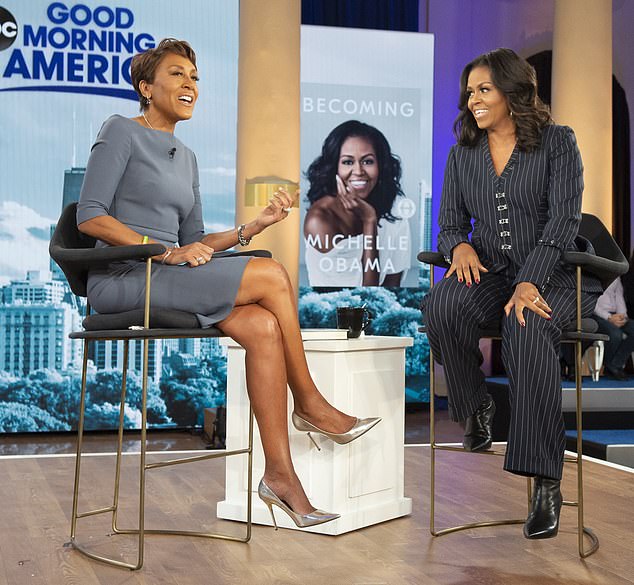 Proud mom: Michelle praised her daughters for managing ‘this situation with poise and grace’ 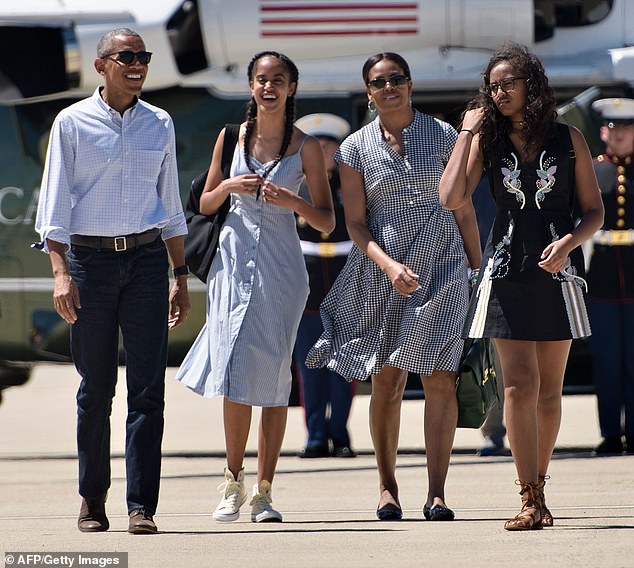 Role models: ‘They are normal and kind and smart and friendly and open,’ Michelle said of Malia and Sasha 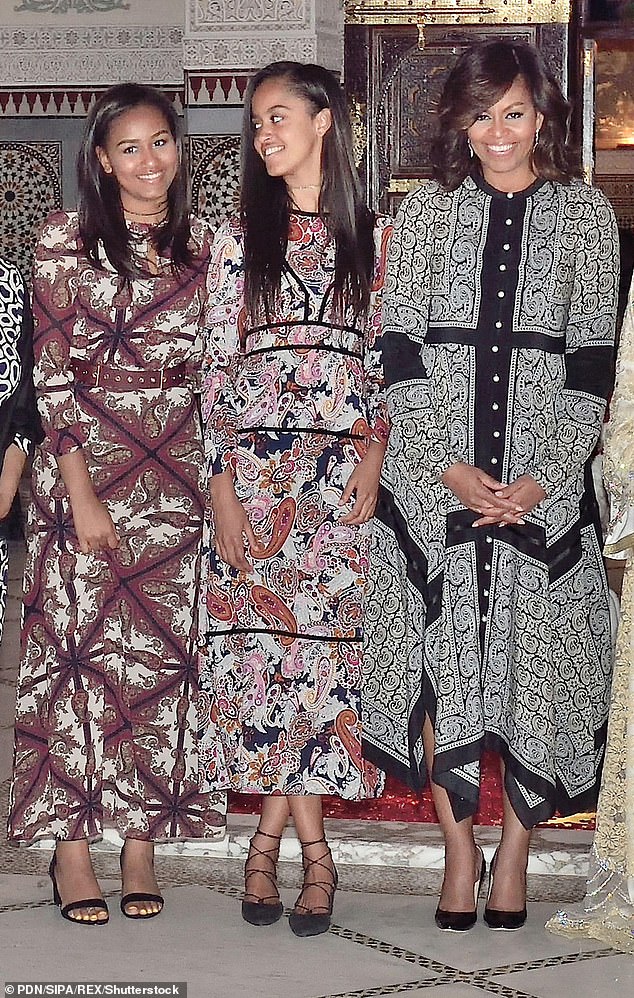 Future politician? Michelle also weighed in on potential candidates for the 2020 presidential election, joking that she ‘might even tap Sasha’ to run

Although she has insisted that she has no plans to run for public office, she was asked about what potential candidates she has her eye on for the 2020 presidential election, including Hillary Clinton.

‘I think at this point everybody is qualified and everybody should run,’ she said. ‘I might even tap Sasha.’

‘Where I am right now is that anybody who feels the passion to get in this race, we need them in there,’ she clarified after being asked if her joke was a reference to Trump.

‘I hope we have a lot of great candidates who get in there and treat each other respectfully,’ she said. ‘That’s the thing I’m going to be looking for personally.’

‘I don’t want people on either party tearing each other up in the process of getting to the nomination,’ Michelle added. 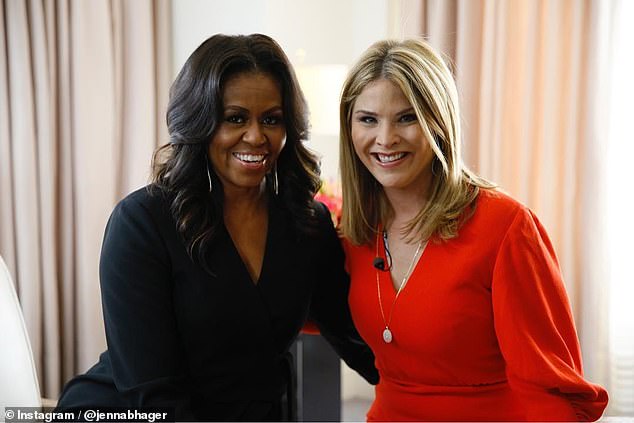 Teaser: Jenna revealed on Instagram that she interviewed Michelle about her new book for the Today show. The segment is to air on Wednesday morning 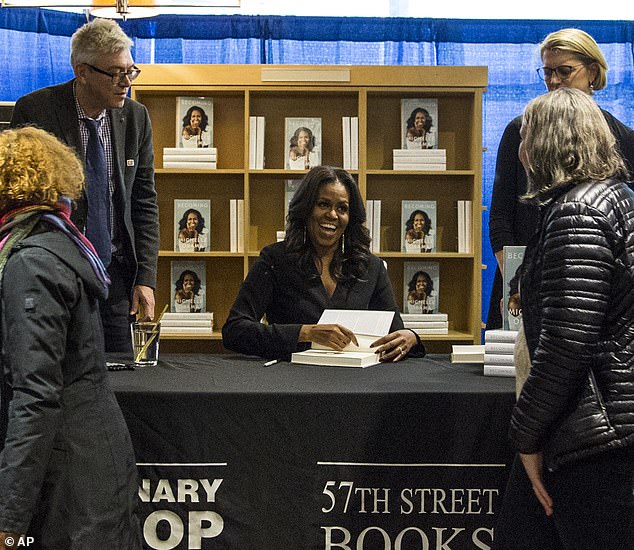 All smiles: After her appearance on Good Morning America, Michelle headed to Chicago to sign copies of her new book, Becoming, at Seminary Co-op Bookstore in Chicago 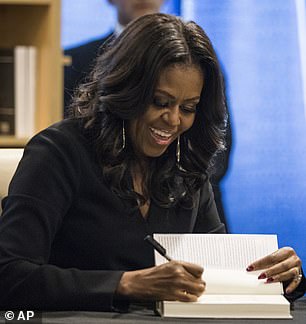 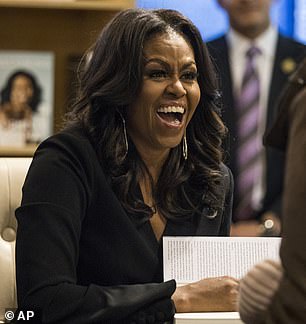 Opening up: Michelle’s memoir features a number of tidbits about the family’s life in the White House 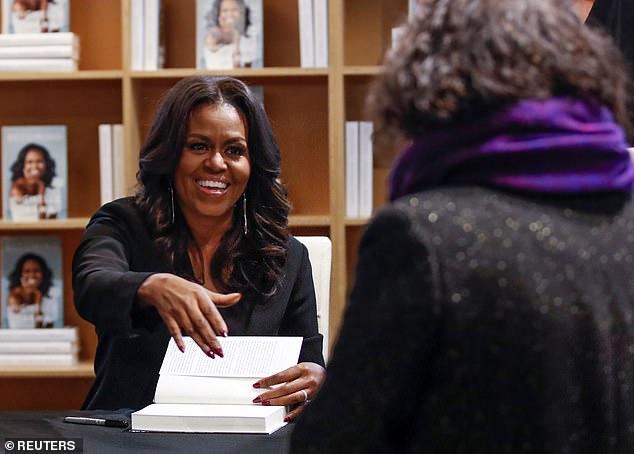 Moving on: The former first lady has insisted that she has no plans on running for public office

‘I’m going to be looking closely at who handles themselves and each other with dignity and respect so that by the time people get to the general people aren’t beat up and battered.’

The former first lady believes this month’s midterm elections have given people hope. 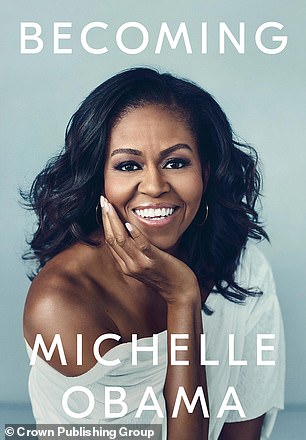 ‘I’m not talking about what it means for one side or the other,’ she noted. ‘What it speaks to is that our democracy is still ours to own and control.”

Michelle’s memoir, for which she received part of a $65 million advance in a joint book deal with her husband, features a number of tidbits about the family’s life in the White House, including the occasionally-stifling presence of so many staff members, and the rigorous security regulations.

During a recent interview with Oprah for Elle magazine, the former first lady discussed a moment in her book when she revealed that she and her daughters weren’t even able to open a window without ‘causing a fuss.’

‘As first lady, you’re not alone much. There are people in the house always, there are men standing guard,’ she wrote in her book.

‘There is a house full of SWAT people, and you can’t open your windows or walk outside without causing a fuss.’

When pressed by Oprah about whether she was being serious about opening a window, Michelle insisted she was telling the truth, explaining that both of her daughters ‘tried to’ but they quickly ‘got the call’ from the Secret Service telling them to ‘shut the window.’