After quitting Twitter due to online harassment, Millie Bobby Brown spoke out against bullying at the 2018 MTV Movie & TV Awards.

While the Stranger Things star missed the event due to a knee injury, she sent along a video message to accept her award for Best Performance in a Show. In the message, Brown thanked her fans for their support and talked about how playing Eleven has “changed my life in the most incredible ways.” She also spoke out against her haters, who made her the subject of homophobic memes last week.

“Finally, since I know there are many young people watching this—and even to the adults, too —they could probably use the reminder that I was taught: If you don’t have anything nice to say, just don’t say it,” she said. “There should be no space in this world for bullying, and I’m not going to tolerate it, and neither should any of you.”

“If you need a reminder of how worthy you are and to rise above the hate, message me on Instagram,” she said with a wink. Brown has disabled the ability for followers to comment on her posts on the social network.

Watch the video to see her full speech. 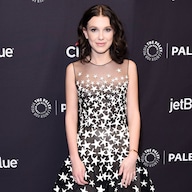 Brown also thanked her supporters for their positivity on Instagram.

“I want to say thank you to all my fans for supporting me and always being there!!” she posted on Instagram Stories. “I couldn’t have done this without every single one of you. I see all your positivity and love every day. Thank you!”

Even though Brown wasn’t able to celebrate her big win in person, she was still there in spirit. The actress shared a picture of her FaceTiming with her co-star Noah Schnapp, who was at the award show.

Brown isn’t the only celebrity to leave a social network due to bullying. Kelly Marie Tran also deleted all of her Instagram posts after suffering “months of harassment.”