You can’t leave them alone for a second! Mother shares hilarious photo of her mischievous little girl after she covered herself (and the sofa) in NUTELLA while her back was turned

A mother-of-four has shared the hilarious moment her mischievous daughter covered herself top to toe in Nutella while her back was turned.

Full-time mum Clare Etherington, 37, from Whitstable, Kent, told how she left freshly-bathed Amelia, two, watching Peppa Pig while she was hanging the washing outside on Wednesday morning.

When Clare came back into the living room just five minutes later she was stunned to find Amelia giggling away, having got her hands on a jar of the chocolate spread and smeared it all over her face, arms and chest – not to mention the cream sofa.

Cheeky Amelia then started chasing her mother around the living room trying to touch her with chocolate-covered hands, Clare said. 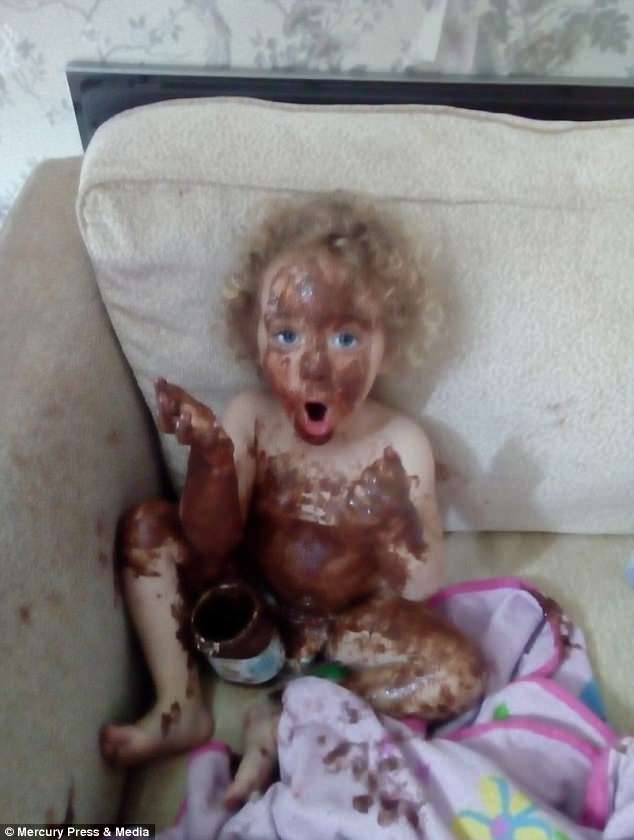 The freshly-bathed little girl had sneaked into the kitchen and helped herself to the tasty treat, much to the mother-of-four’s dismay 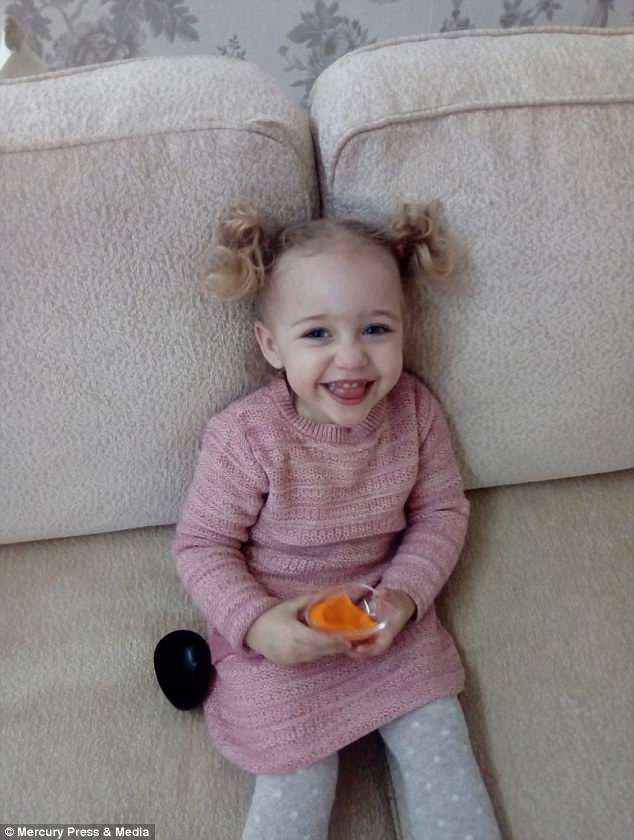 Clare Etherington, 37, from Whitstable, Kent, was shocked to find her two-year-old daughter Amelia covered in Nutella after leaving her alone for just five minutes

Speaking about the moment she found her little girl, Clare said: ‘I couldn’t believe the state I found her in.

‘I’d just given her a bath and we were getting ready to go shopping.

‘I’d left Amelia watching Peppa Pig, and usually if you put that on she doesn’t move.

‘She had all her Peppa Pig toys around her and that’s how I left her.

‘I was just putting the washing out, I must have only been outside for about five minutes.’ 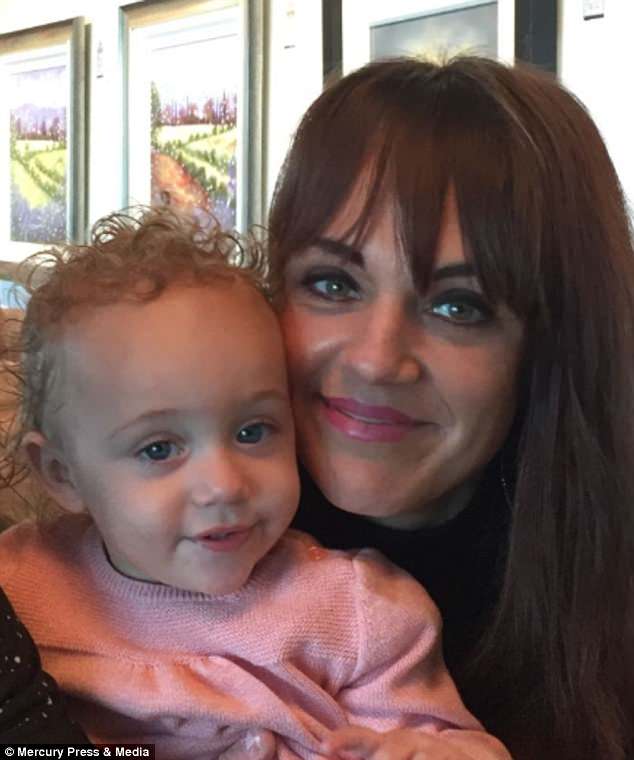 Revealing that the little girl had helped herself to the treat, she said: ‘She had gone into the kitchen and got the jar of Nutella and a spoon from the drawer.

‘I walked into the front room and she was absolutely covered. It was all over the sofa and on her blanket.

‘She’d got a spoon and had been eating it and then I think she just decided to cover herself in it.

‘When I walked into the front room I was on the phone to my mum and I just said “oh my gosh”, and I quickly took a picture to send to my mum. 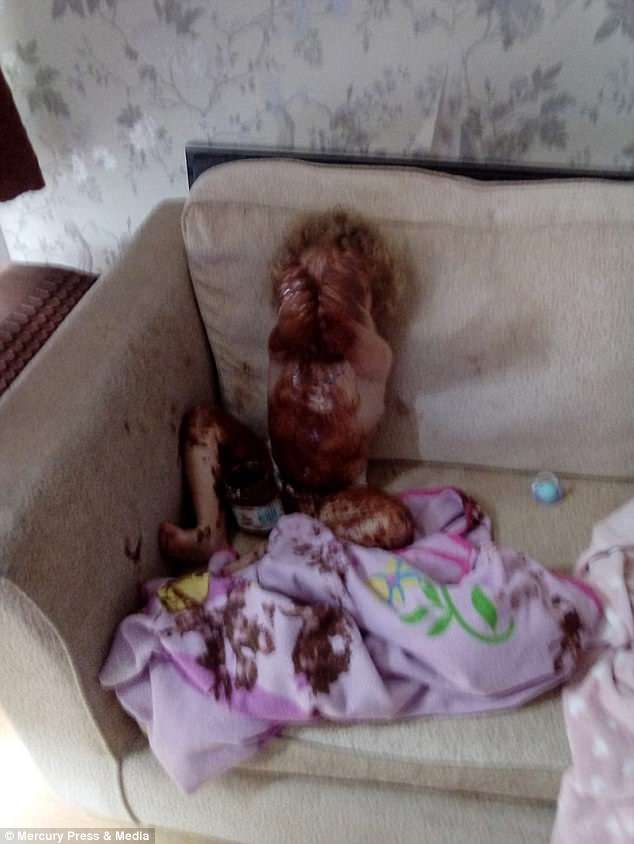 Her mischief didn’t end there, with the little girl proceeding to chase her mother around the room 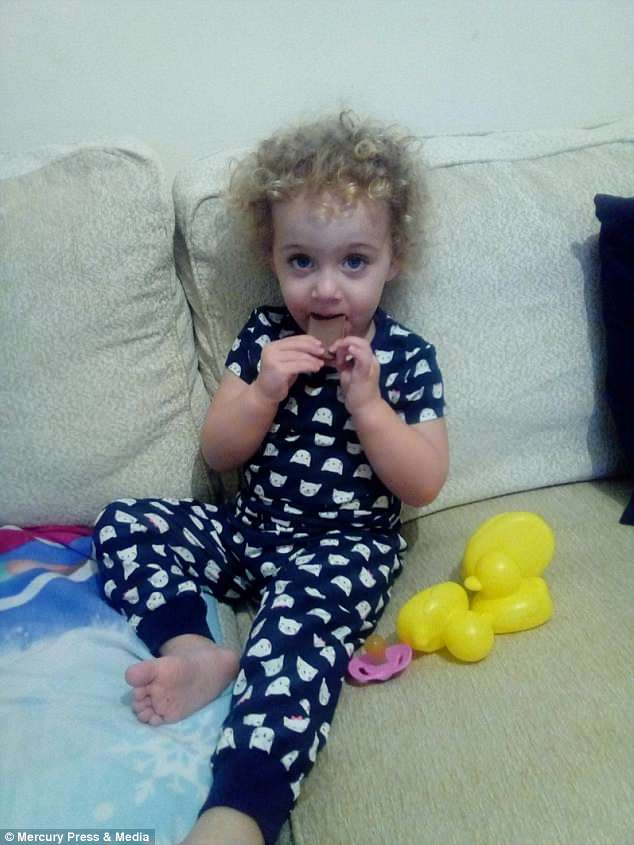 ‘It was the way Amelia put her hands up to me and smiled as if saying “look what I’ve done”.

‘She just started putting her hands up and she was laughing.’

And her mischief didn’t end there, with the little girl proceeding to chase her mother around the room.

Clare continued: ‘I started giggling then she started trying to chase me with these chocolate [covered] hands.

‘She was running around and it was going all over the floor.

‘It was nearly a full jar when she got hold of it and was empty by the end. She does love Nutella.

‘She’s not the tidiest of children. She managed to create that chaos in five minutes, it was crazy,’ her mother said. 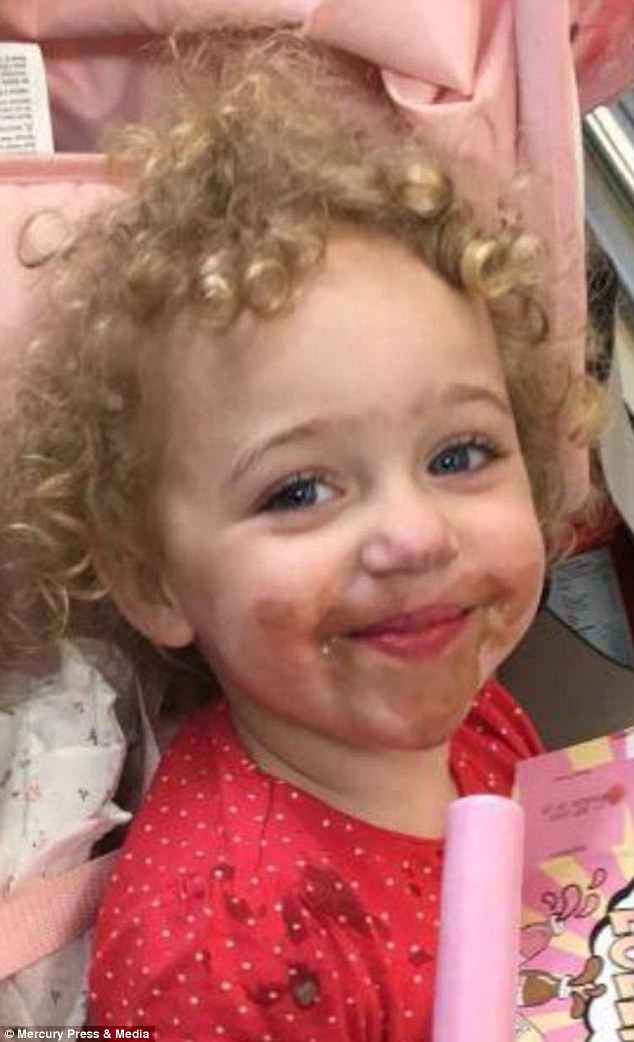 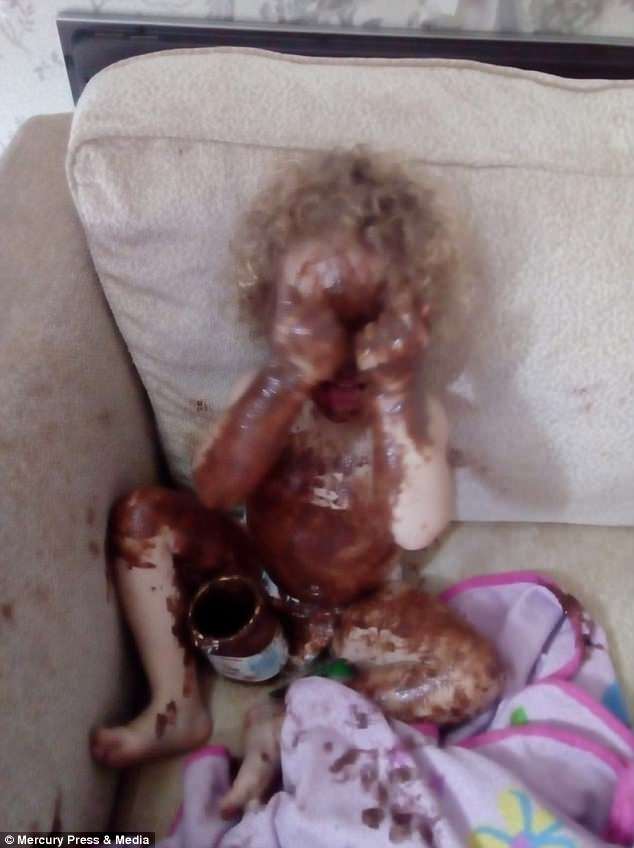 Full-time mum Clare, who has three other children aged 19, 13 and nine, said she had to give Amelia another bath and said it took a couple of hours to clean up the mess

Clare, who has three other children aged 19, 13 and nine, said she had to give Amelia another bath and said it took a couple of hours to clean up the mess.

Clare said: ‘I went to give her her second bath of the day and she was putting her hands all over the bath.

‘I got covered in it taking her to the bathroom. She’s got really curly hair so it took quite a while to comb the Nutella out of it.

‘I was in the bathroom for a good 15 minutes – I had to condition it and she had it all in under her nails and in her eyebrows. 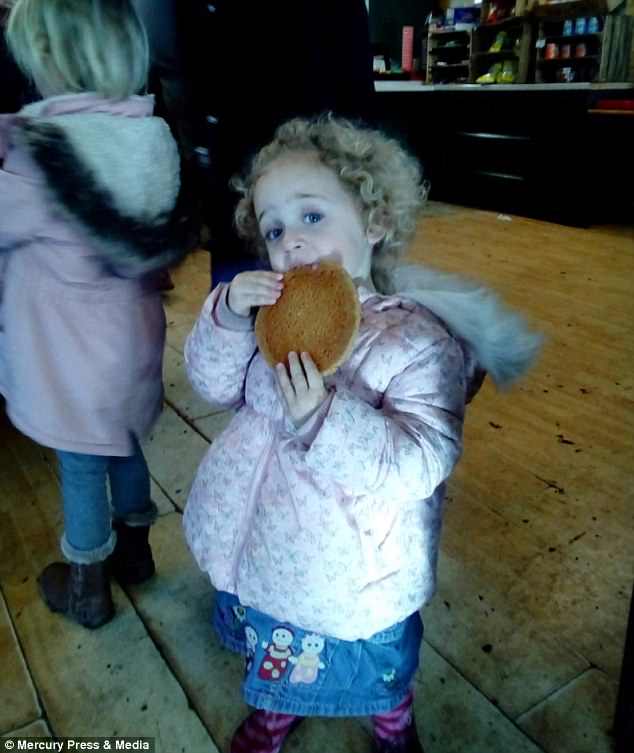 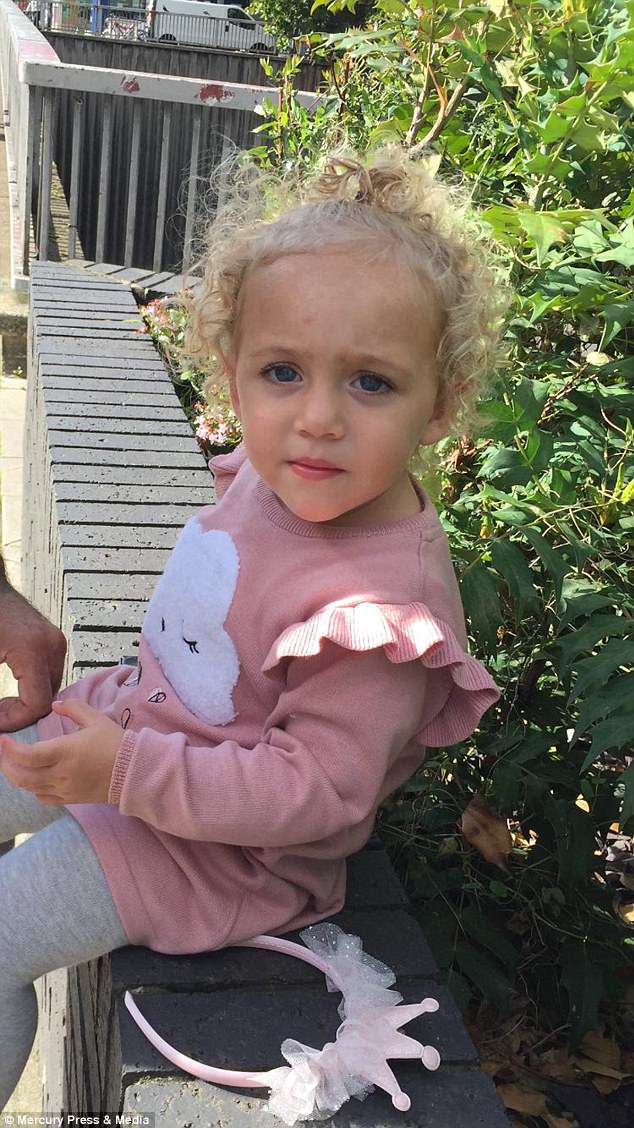 ‘My sofa covers were a mess. I had to strip the covers off and wash them and scrub the arms, clean the floor and her blankets, it took a while.

‘I had to leave it and come back to it and I still keep finding splodges of Nutella everywhere. I’m planning to give the arms of the sofa another going over.’

Clare said although Amelia’s got a mischievous streak she’s not done anything like this before.

Clare said: ‘She knows when she’s been a bit naughty because she’ll put on this really big smile like ‘don’t be cross at me’. 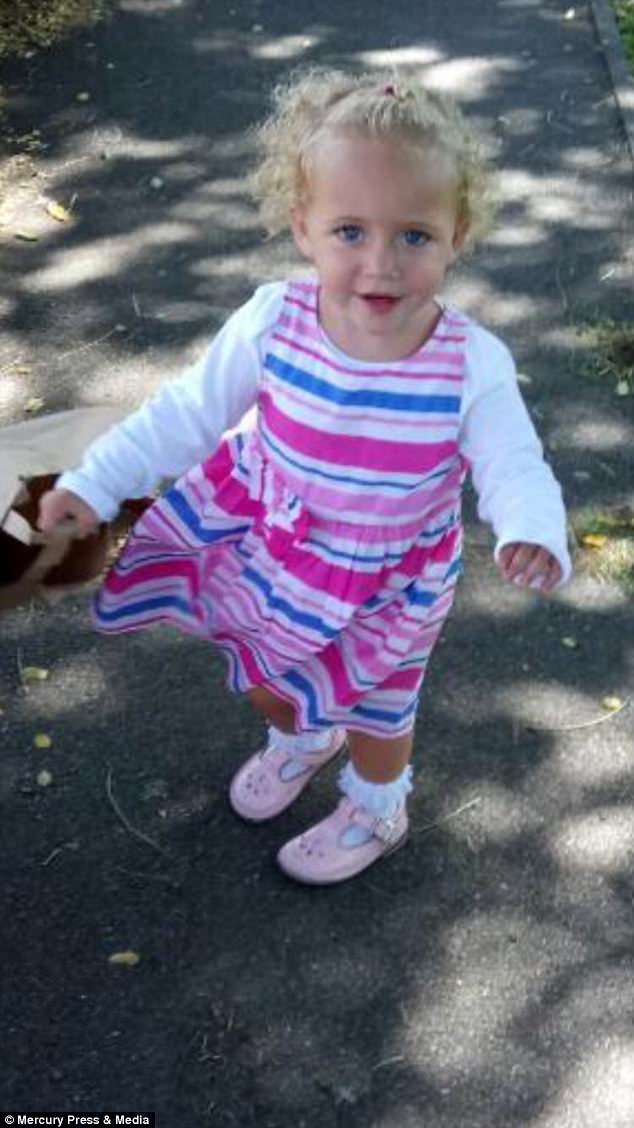 ‘She’s a cheeky girl and a little ray of sunshine. If there’s something that you don’t want her to find she will end up finding it,’ Clare said

‘I was laughing but I told her she’s not allowed to do it again and I’ve moved the Nutella so it’s really high up now and she can’t get to it.

‘It was funny because when I was trying to wash her she was going ‘I’m in a mess’ like she didn’t know how it had happened.

‘She’s a cheeky girl and a little ray of sunshine. If there’s something that you don’t want her to find she will end up finding it.

‘She’s always making everybody laugh. She’s one of those kids who does something and it’s just funny, she’s very bubbly and always talking.’ 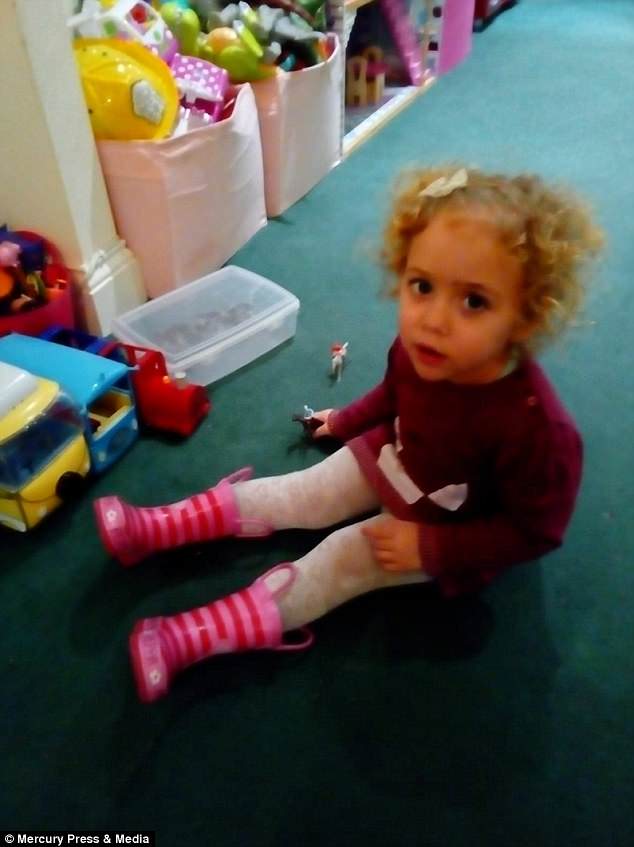 ‘She’s always making everybody laugh. She’s one of those kids who does something and it’s just funny, she’s very bubbly and always talking,’ he mother said