By Meghan’s royal appointment: Duchess of Sussex’s ‘matchmaker’ and friend Misha Nonoo advertises her label’s ‘Husband’ blouse as the ‘shirt that sealed the deal’ (and she isn’t the only one making the most of a royal wedding connection)

Meghan famously wore ‘The Husband Shirt’ by Misha Nonoo at her first public appearance with Harry – and now it appears her fashion designer friend behind the brand is cashing in on the royal connection.

A sponsored post from Misha Nonoo that has been circulating on Instagram describes the $185 (£138) white blouse as ‘the shirt that sealed the deal’.

Meghan, 36, wore the simple white shirt with ripped jeans when she attended the Invictus Games with Harry in Toronto last September – just two months before their engagement was announced.

Misha, who is rumoured to be the matchmaker that set them up on the blind date that sparked their fairytale romance, attended the royal wedding in Windsor on Saturday, posting several snaps of Instagram from the big day.

It has raised eyebrows among some observers, who suggested she’s using her connection to Meghan to market the shirt famously worn by the new Duchess of Sussex.

But Misha’s brand is far from the first to seize on the marketing potential of a link to the royal romance.

Jessica Alba promoted her natural products business The Honest Company after it was revealed that Daniel Martin, one of her consultants, was doing Meghan’s make-up – while make-up artist Charlotte Tilbury shared the products used by wedding guests Amal Clooney and Kitty Spencer on the big day. 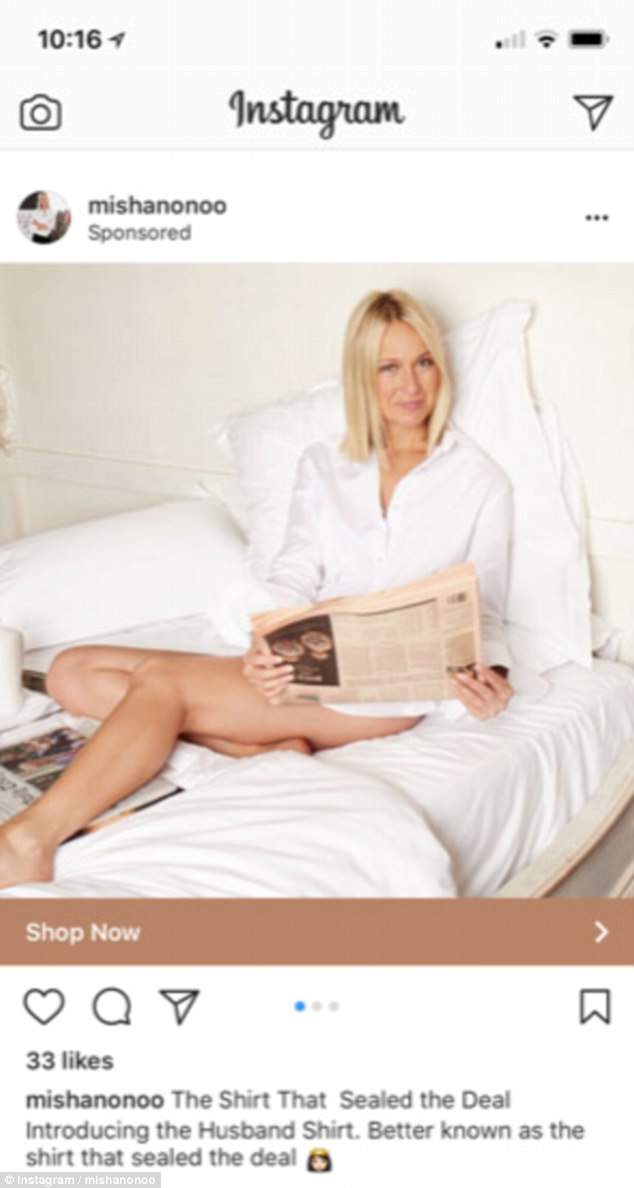 One Instagram user said: ‘One of Megan’s friends is already using the connection to try to flog shirts .. insinuating that one of her shirts “sealed the deal” with Prince Harry.’

Misha regularly advertises The Husband Shirt on her Instagram feed, sharing a photograph of Meghan wearing the garment back in September – captioned ‘MM in her MN shirt from our #Easy8 [collection]’

In another post that alludes to its connection to the royal romance, the shirt is described as ‘the easiest commitment you’ll ever make.’

The controversy comes after Misha attended the royal wedding on Saturday, showing off designs from her own label. 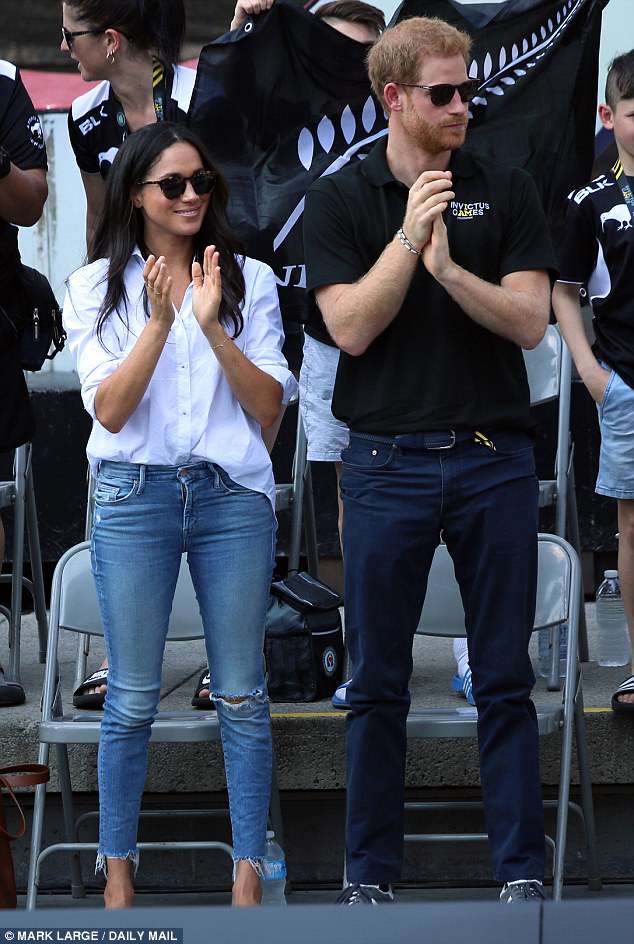 Meghan, 36, famously wore the simple white shirt with ripped jeans at her first public appearance with Harry at the Invictus Games in Toronto last September

Sharing photographs from the weekend on Instagram, she wrote: ‘Memories from the happiest weekend ❤️’

‘I designed this dress using ice blue silk mikado from Taroni, one of the oldest silk mills in Lake Como, Italy.’

Posting a picture of herself in her evening outfit, she added: ‘For black tie, I love wearing a jumpsuit and created this one shoulder, draped silk style in our signature red.’

MailOnline has contacted a representative for Misha Nonoo for comment. 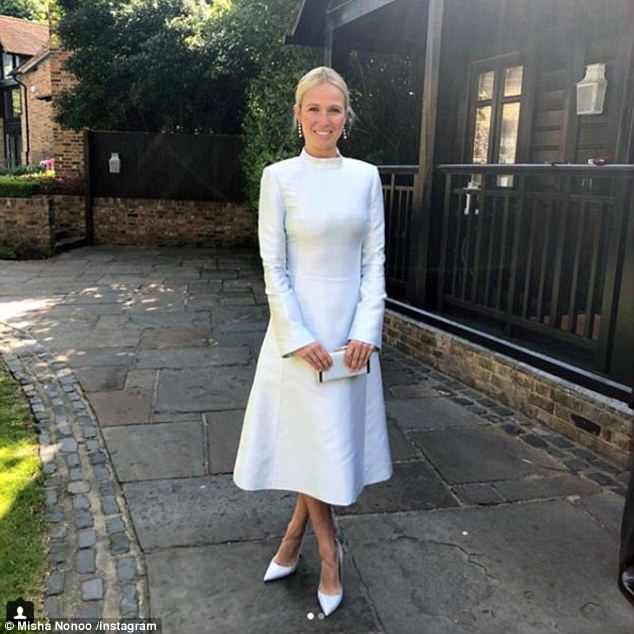 Misha attended royal wedding on Saturday, wearing a high-neck blue shift dress that she designed herself 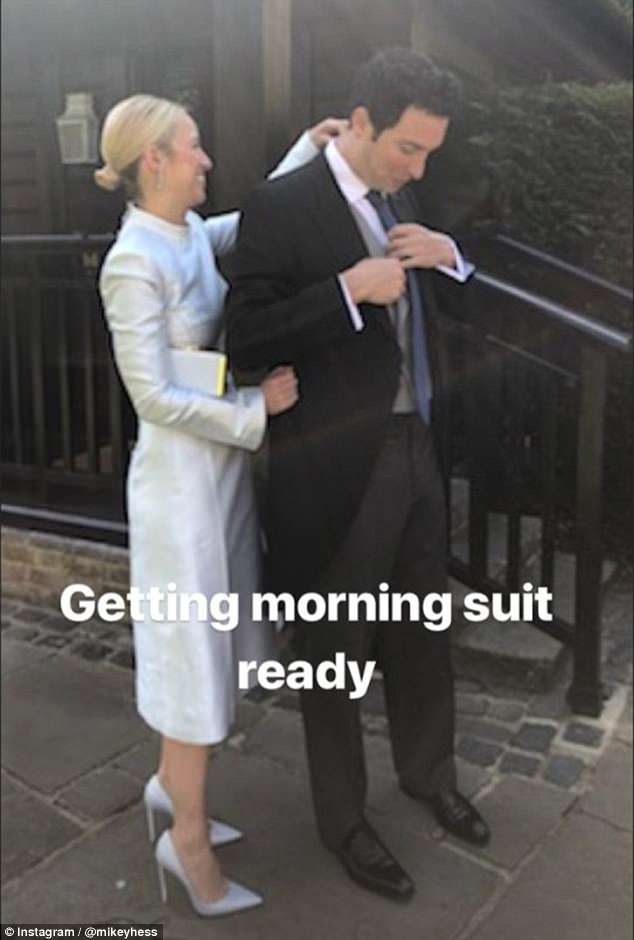 Misha, who was previously married to Harry’s friend Alexander Gilkes, appears to have found love again herself – after appearing in several snaps with American oil heir Michael Hess

OTHER BRANDS CASHING IN ON THEIR MEGHAN LINK

The Canadian-based label re-named their coat The Meghan after the former actress wore their white wrap coat at her engagement photocall.

The Californian-based jewellery brand revealed the Duchess had commissioned six gold bracelets for her friends. The Kensington bracelet is now available to buy for $450 (£340).

Another Canadian brand, Mackage, decided to restock a sand-coloured coat worn by the Duchess in Belfast after selling out instantly.

It is not the first time that those close to Meghan have used their royal connection for publicity.

At the weekend, actress Jessica Alba gushed that the chief colour consultant at her business Honest Company, Daniel Martin, did Meghan’s make-up.

Meghan’s former agent Gina Nelthorpe-Cowne has given several interviews ahead of the wedding, as well as working as a pundit for Sky News on Saturday.

Florist Philippa Craddock and baker Claire Ptak, who were behind Meghan’s flowers and wedding cake, have both shared a number pictures on Instagram highlighting their involvement in the royal wedding.

Meanwhile, Givenchy – who designed Meghan’s stunning £200,000 gown – has uploaded a large picture of the newlyweds to its website, to show off their royal wedding connection.

Make-up artist Charlotte Tilbury also capitalised on the royal connection, after sharing the details of the cosmetic products worn by wedding guests Amal Clooney and Lady Kitty Spencer on the big day.

Luxury French brand Diptyque has also revealed that it provided room sprays and candles used to ‘scent’ the rooms where Harry and Meghan got ready, as well as the chapel itself.

Earlier this year, the Duchess of Cambridge’s parents, Carole and Michael Middleton, also appeared to get in on the act – with their company Party Pieces selling a host of patriotic products ahead of the wedding.

WHO IS MISHA NONOO?

Born in Bahrain, her father is an Iraqi businessman, her mother is English.

The family moved to the UK when she was 11 and she attended the ACS International school in Cobham (where full boarding and tuition fees are now a stonking £45,560 a year).

She then spent two years in Paris, before taking a job in a small tailoring firm in New York.

She has said that she wanted to be a clothes designer since she was 11 years old. Within ten years, she had achieved that ambition via a fashion collection — initially only of jackets and coats.

A few seasons later, she had been dubbed ‘one to watch’ in New York, with Gossip Girl star Blake Lively wearing her clothes in Vogue magazine, and actress Kirsten Dunst being an early fan.

Influential stylist Olivia Palermo has championed her, and happily Palermo is also a pal of Meghan’s.

Nonoo’s stellar social profile in New York did her professional success no harm, and this was partly founded on her marriage to Old Etonian Alexander Gilkes.

He rose from beginnings at the luxury concierge service Quintessentially to work for the LVMH luxury goods group, before moving into art and auctions.

Misha’s 2012 wedding to Gilkes, the son of a wealthy dermatologist, was a three-day bash in a 16th-century castle in Venice, with a live performance by singer Lana Del Rey.

Given that Meghan said this week that she knew almost nothing about Prince Harry before she met him, it’s interesting to note that Princesses Eugenie and Beatrice attended the Gilkes-Nonoo wedding in 2012.

Not only that, Meghan’s ‘sister’ Misha also went to the wedding of Prince William and Kate Middleton the year before. So it’s not as though Meghan was entirely a stranger to the young royal set.

And in the summer of 2012, Gilkes hosted Pippa Middleton at the couple’s Manhattan townhouse when she was on a trip to the city.

All of the Middletons are pals with Gilkes — his nightclub entrepreneur brother Charlie once dated Pippa. Also, in 2013, Gilkes employed Princess Eugenie at his New York-based art auction house, Paddle8.

Eugenie and Misha became chums, and the Princess is a regular at her Fashion Week parties.