From bedazzled to the barely there: Miss Universe contestants show off their patriotic sides (and a whole lot more) in elaborate gowns inspired by their home countries during the pageant’s costume presentation in Thailand

Women from all over the world dazzled in elaborate gowns inspired by their unique nations on Monday during this year’s Miss Universe national costume presentation.

Each of the 94 contestants competing in the 67th annual Miss Universe pageant took turns strutting down the stage while showing off their one-of-a-kind ensembles —and their national pride — during the event that took place in Bangkok, Thailand. Some of the beauty queens opted for sparkly gowns covered with jeweled embellishments, while others wore next to nothing and modeled bodysuits and bikinis. There were feathers, capes, and even props.

Miss USA Sarah Rose Summers paid homage to her country — and her middle name — by wearing a costume that represented the national flower, the rose. Sarah’s costume featured a red sequin bodice and a flared skirt covered with roses in various shades of crimson. Meanwhile, Miss Great Britain Dee-Ann Kentish-Rogers took inspiration from the suffragettes in the UK who fought for the right to vote. Her dazzling costume was made up of suffrage colors: purple for dignity, white for purity, and green for hope.

The national costume presentation is only one part of the pageant, which will be held at Impact, Muang Thong Thani in Bangkok on December 17. At the end of the competition, Demi-Leigh Nel-Peters of South Africa will crown her successor. In honor of the pageant, FEMAIL has highlighted some of this year’s most eye-catching costumes below. 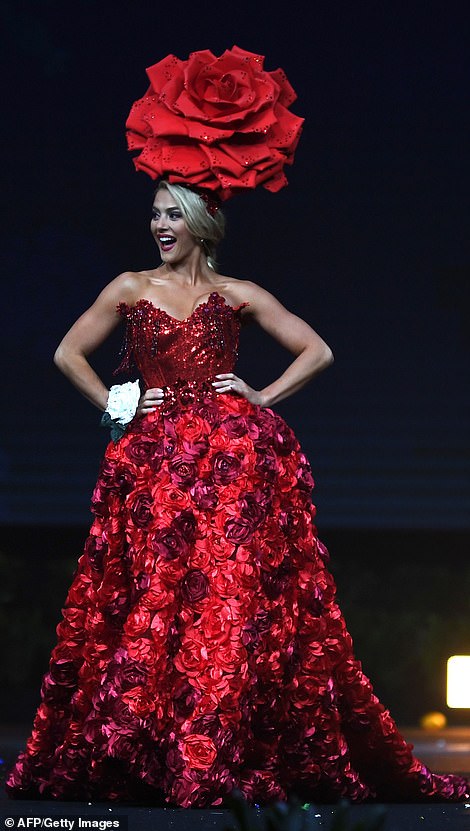 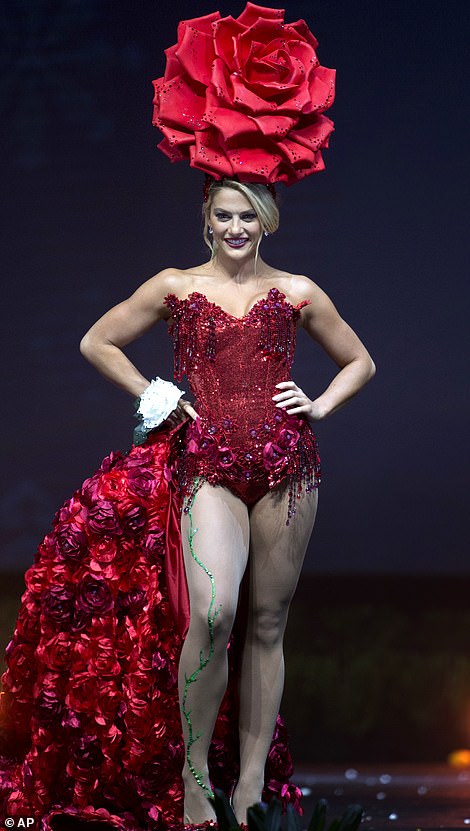 Flower power: Miss USA Sarah Rose Summers paid homage to her country — and her middle name — by wearing a costume that represented the national flower. The rose grows throughout the country and is widely considered a symbol of love. Sarah’s costume featured a red sequin bodice and a flared skirt covered with roses in various shades of crimson. To top off her look, she donned a bright red rose hat on top of her head. After strutting to the center of the stage, Sarah removed the skirt of her gown to reveal her embellished bodysuit and her sheer pantyhose, which were decorated with a green vine that crawled up her right leg 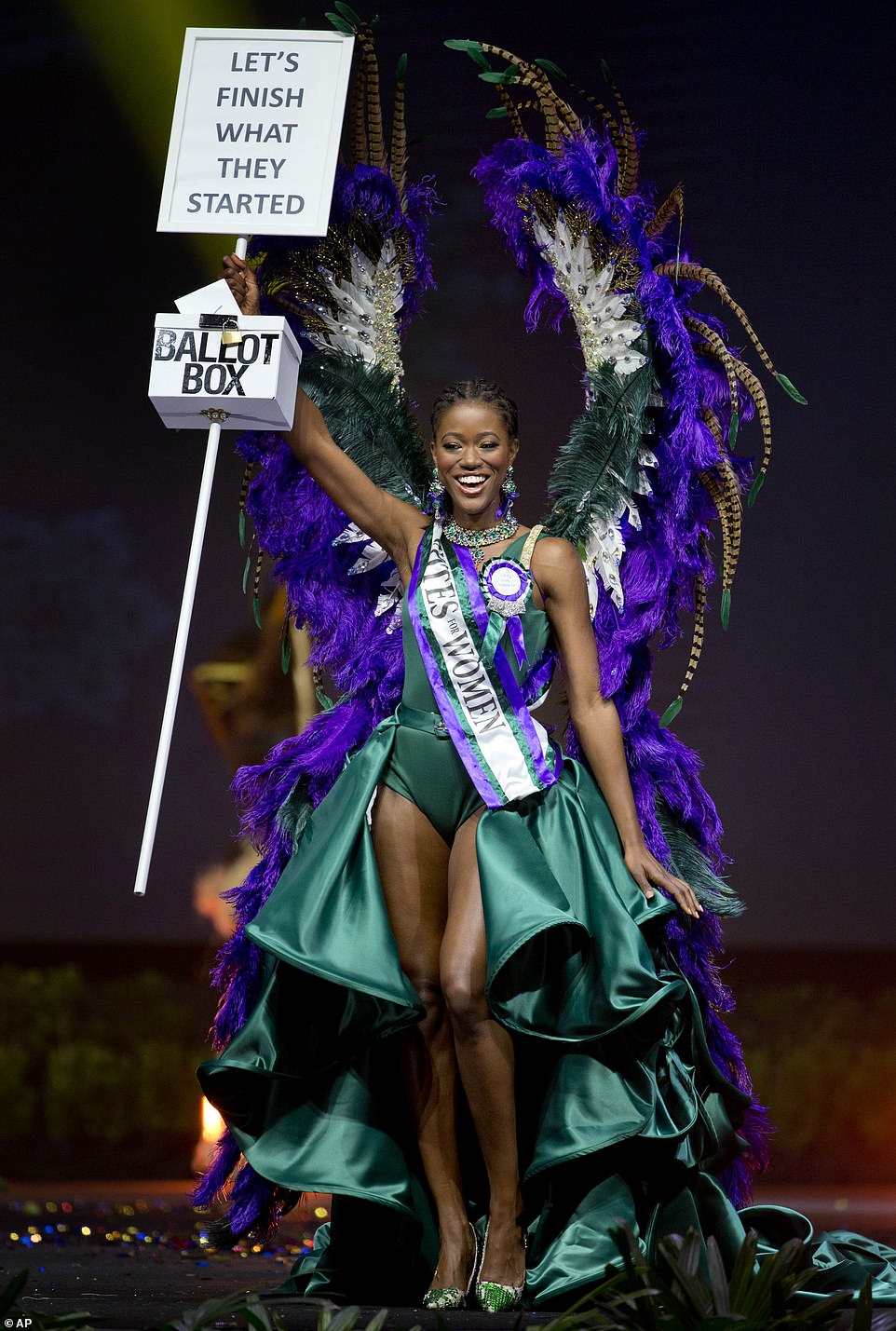 Getting political: Miss Great Britain Dee-Ann Kentish-Rogers was inspired by the suffragettes in the UK who fought for the right to vote. Her dazzling costume was made up of suffrage colors: purple for dignity, white for purity, and green for hope. This year marks the 100th anniversary of women being granted the right to vote in the UK in 1918, and Dee-Ann proudly carried a ballot box and a sign that read: ‘Let’s Finish What They Started’ 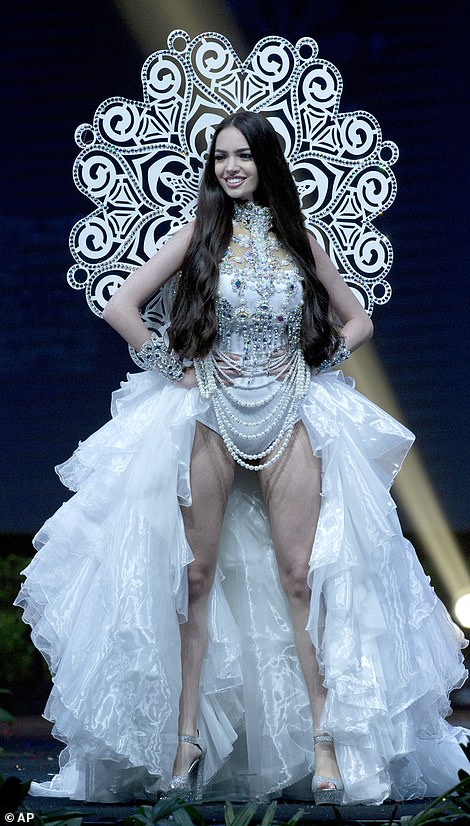 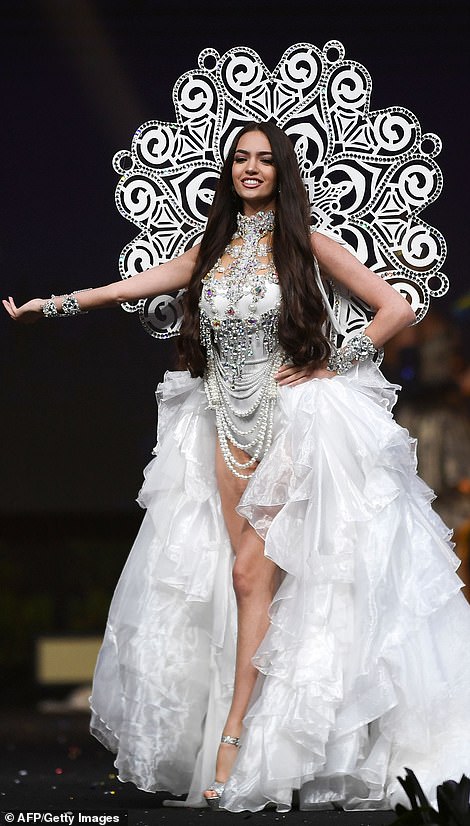 Ice queen: Miss Switzerland Jastina Doreen Riederer paid homage to Switzerland’s mountains of snow by dressing as a snowflake. Peace, equality, and freedom were the main elements of the costume, which was made up of a white bodysuit adorned with crystals and beads and a ruffled train that fluttered as she walked across the stage 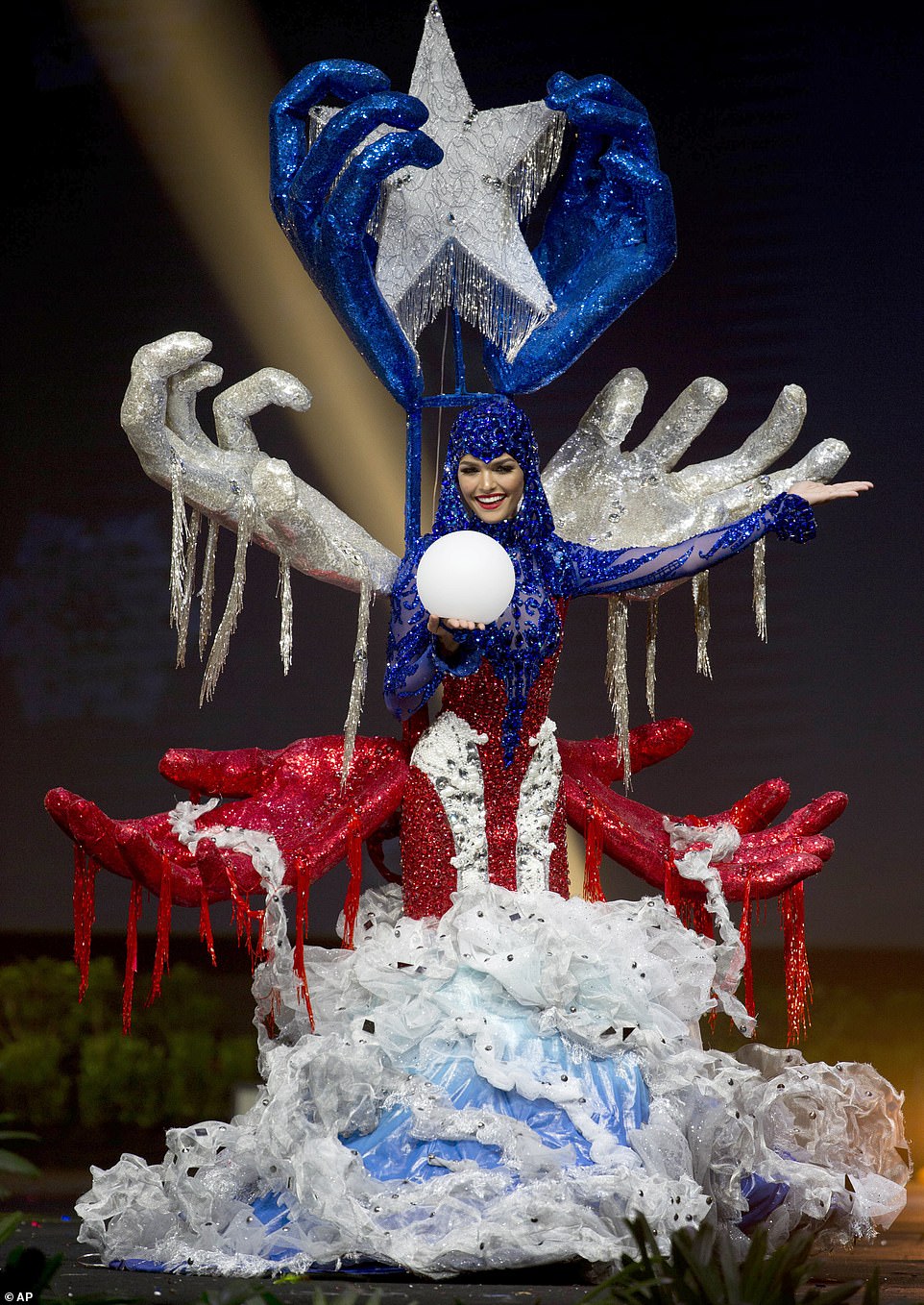 Looking to the future: Miss Puerto Rico Kiara Ortega’s red, white, and blue costume represented the winds of Hurricane Maria, which wreaked havoc on the U.S. territory in 2017. The dress, which symbolized the resilience of the people of Puerto Rico, featured metallic finishes and LED lights to show the movement of the wind during the storm. She carried a white orb to portray hope for a new tomorrow 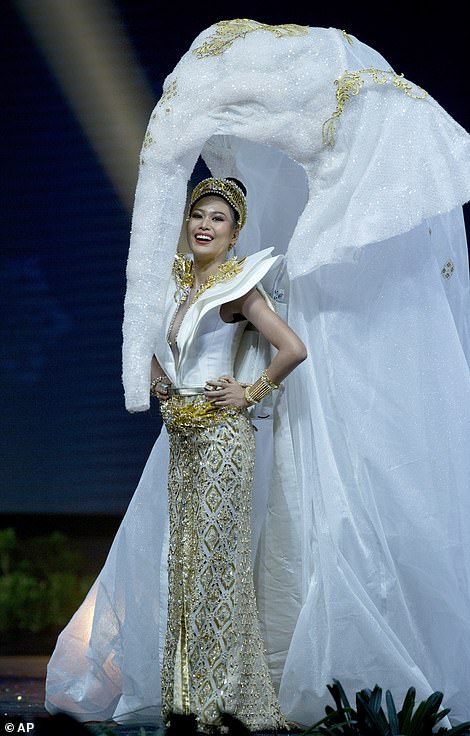 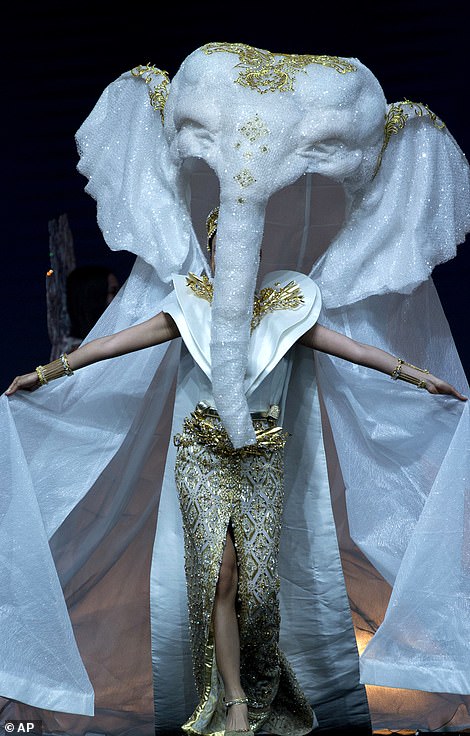 Going all out: Miss Thailand Sophida Kanchanarin’s costume was called ‘Chang the Icon of Siam,’ a symbol of Thai tradition and way of life. Chang means ‘elephant’ in Thai, and she incorporated the majestic animal into her white and gold costume, which was also reminiscent of a royal Thai look 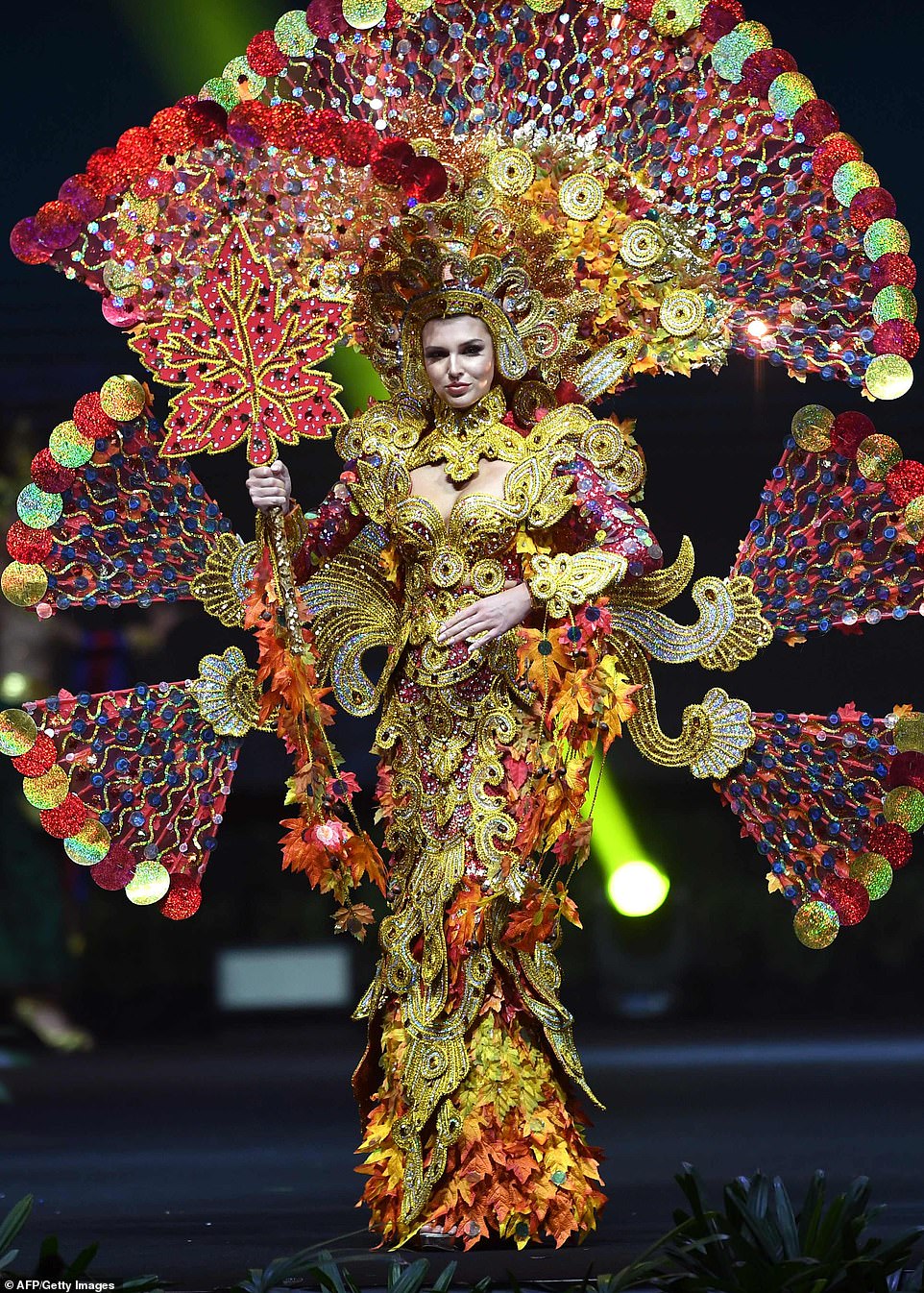 National treasure: Miss Canada Marta Stepien paid tribute to her country’s most famous symbol, the maple leaf. It was adopted as an emblem by the 1700s by French Canadians along the St. Lawrence River. Dubbed ‘The Queen of the Maple Leaf,’ Marta’s costume was adorned with yellow, red, orange, and blue embellishments to represent the colors of a changing leaf 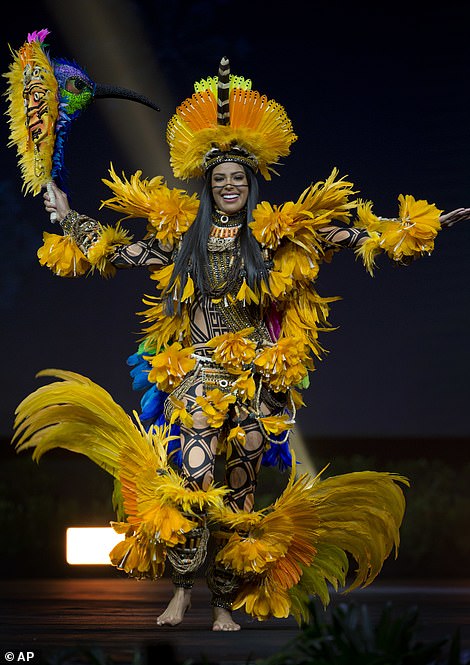 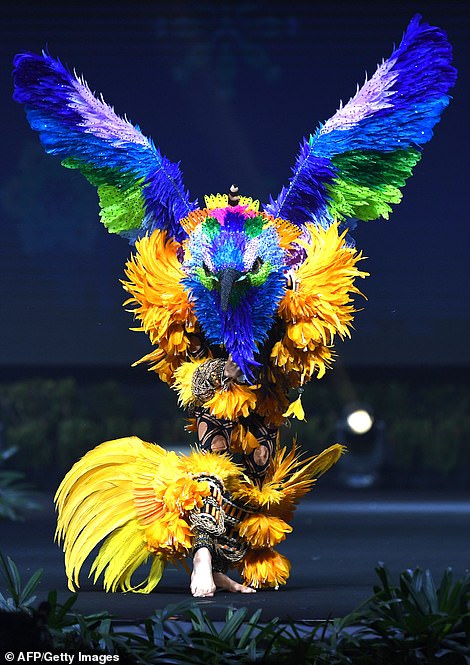 Ready for flight: Miss Brazil Mayra Dias honored her the Amazon rainforest in her country by transforming into a bright yellow bird to represent the need for environmental protection. Her elaborate costume featured thousands of feathers and took three months to make. When Mayra turned around, it looked like a beautiful bird was taking flight 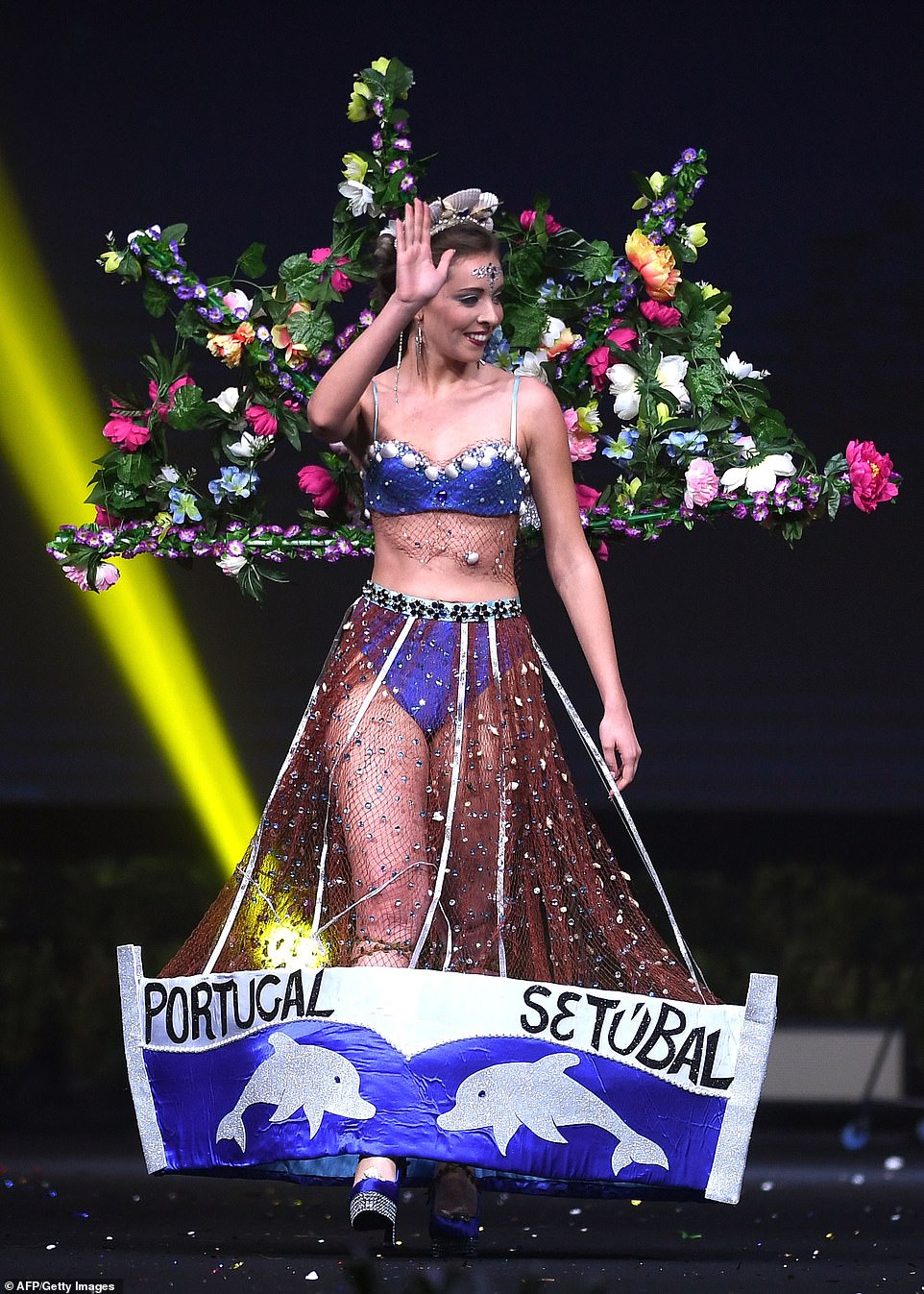 By the sea: Miss Portugal Filipa Barroso donned a costume inspired by the city Setubal, which is at the center of the country’s fishing industry. To pay tribute to the maritime port, Filipa wore a gown made up of fishing net. The see-through frock revealed her royal blue bra top and matching high-waisted briefs. She topped off her look with a crown of seashells 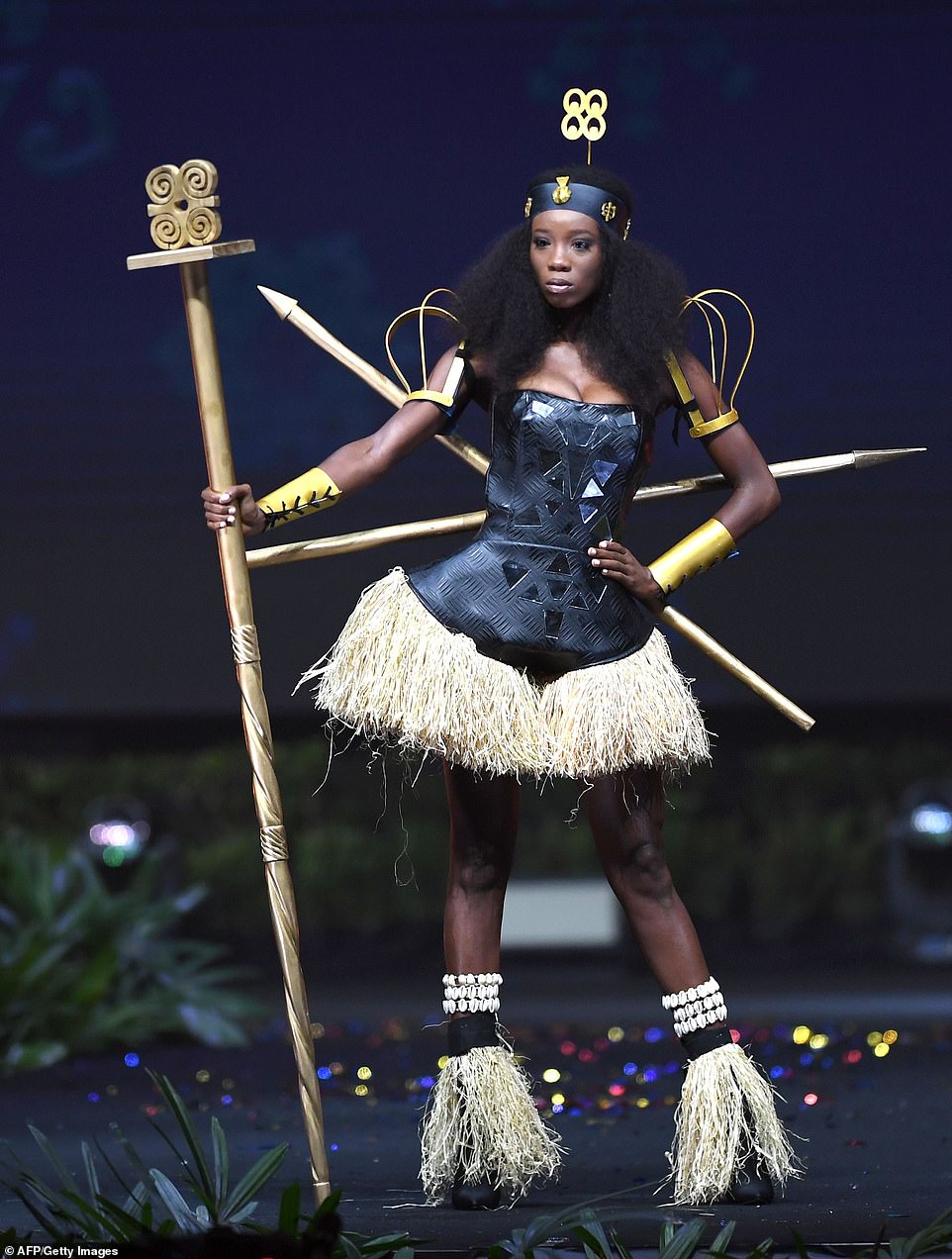 Fierce: Miss Ghana Diata Hoggar’s costume was inspired by a warrior queen and represented her country’s strength and power. She donned a black leather bodice and a skirt adorned with straw to highlight Ghana’s connection to the earth and sun. On top of her head, she wore a sunlight headpiece of gold 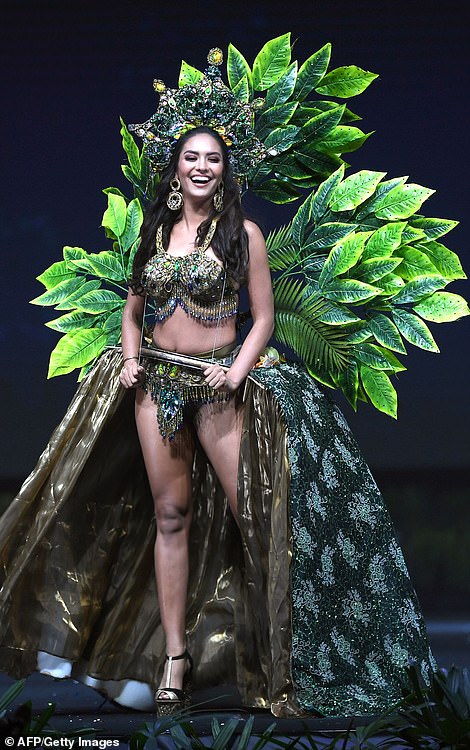 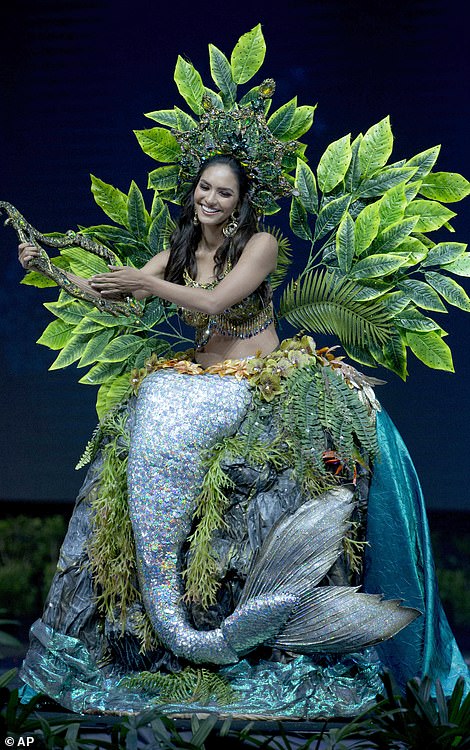 Magical: Miss Peru Romina Lozano grew up hearing stories about the sirens and spirits that live in the jungle in her country. She was inspired to share those tales with the audience through her costume, which was covered with green leaves and vegetation. When she reached the center of the stage, she turned her skirt around and transformed into a mermaid perched on a rock 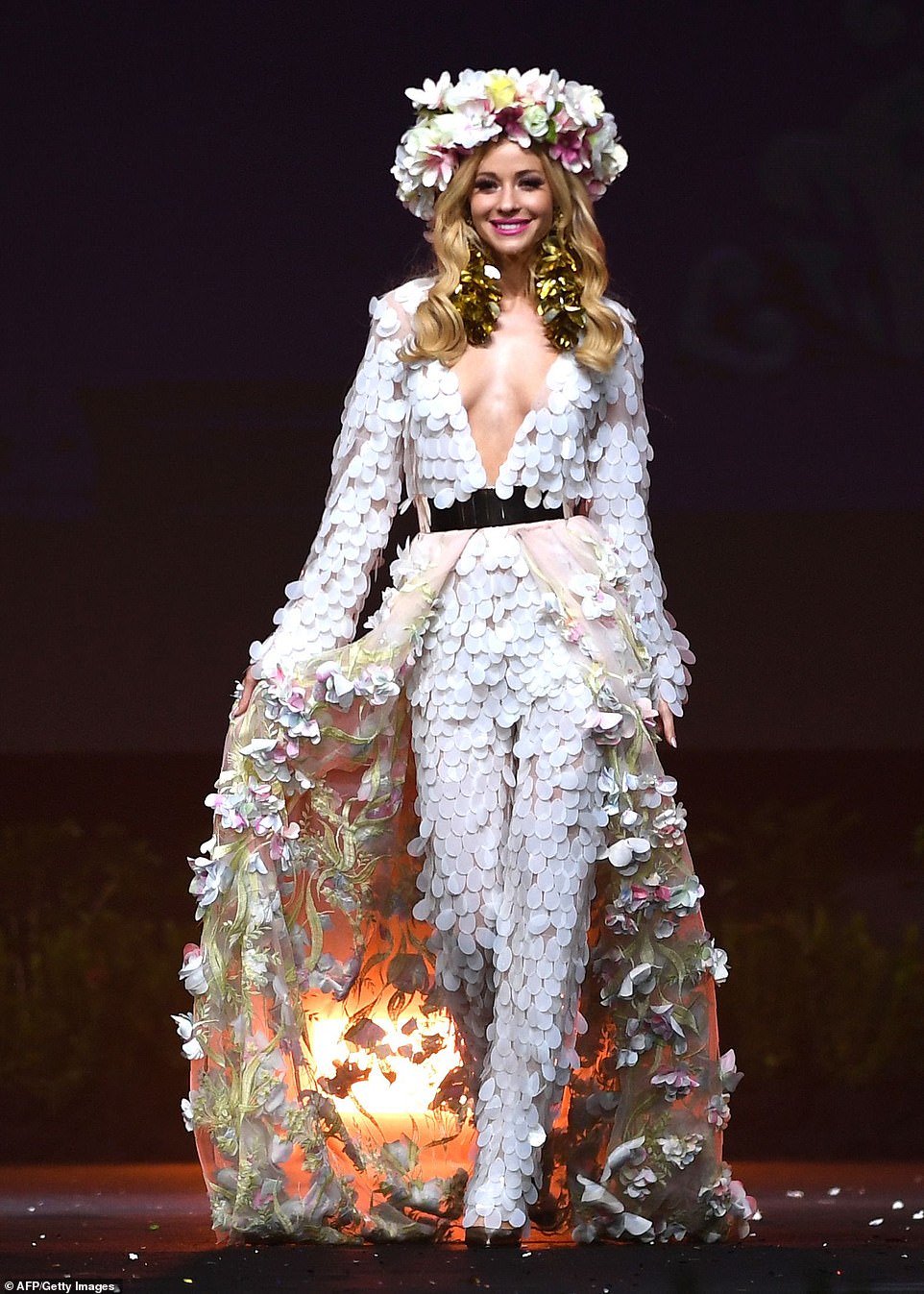 Goddess: Miss Poland Magdalena Swat was inspired by Slavic mythology, particularly the water nymph Rusalka. Magdalena donned a sparkling white jumpsuit featuring a train of flowers and an elaborate flower crown on top of her head.