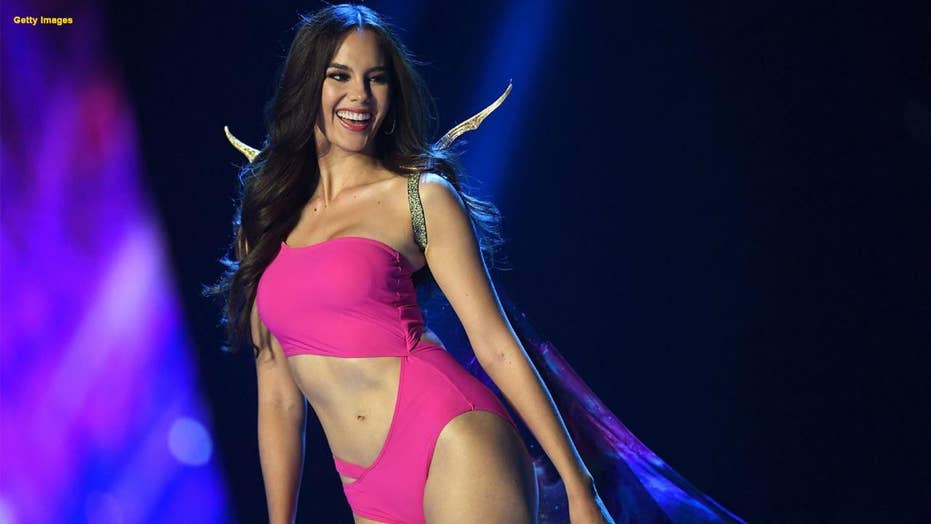 Miss Universe Catriona Gray says she perfected her now viral ‘lavawalk’ during her weekly ‘personality development’ exercises ahead of the pageant.

Checking her phone during her photo shoot for The Post, Miss Universe Catriona Gray audibly gasped.

Turns out, Tyra Banks had given her a shout-out on Twitter, writing, “Can’t stop thinking about that #LavaWalk.” The supermodel was referring to Gray’s slo-mo runway strut that helped her nab the crown — and went viral.

“She’s just the mother of fierceness,” said Gray of Banks. “I was over the moon. That was such a compliment coming from her.”

Since the 25-year-old beauty won Miss Universe in December, she’s shot to online stardom. And in the Philippines, where pageants receive as much fervor as boxing, Gray has become a national heroine.

Her journey to Miss Universe started at a young age, but it wasn’t originally her own dream. The brunette beauty grew up in Cairns, Australia. Her father is a retired Scottish engineer and her Filipina mother is an accountant who herself once auditioned for the Miss Philippines pageant, but didn’t make it to the finals.

Instead, Gray’s mom put her daughter in local modeling competitions, and Gray won Little Miss Philippines when she was 5 years old. Still, she said, “I never had an interest in pageantry.”

A fashion photographer in Manila scouted her when she was 13, and Gray began flying to the Philippines every summer to do editorials and beauty campaigns.

“I was an only child and was a little bit sheltered,” Gray said of her teen years. But at 17 she decided to take a gap year before starting college and move by herself to Manila, where she became a full-time model and also started volunteering for Young Focus, a charity that focuses on childhood poverty.

“It was a frustrating time in my life as a young adult, and I just wanted to concentrate on other people instead of my own situation,” Gray said.

That’s when she began to take an interest in pageantry, after seeing how it is treated as a national sport in the Philippines. 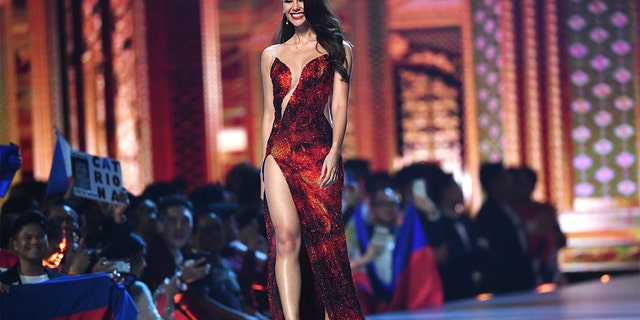 For the pageant, Gray had local designer Mak Tumang create a fiery dress that was modeled after a volcano near her mother’s hometown.
(Lillian Suwanrumpha/AFP/Getty Images)

“I saw how much pageants demanded attention, and so I thought about what more I can do to pull awareness about the things I’m passionate about,” Gray said. In 2016, she was one of five women to win Miss Philippines (each queen goes on to represent the country in an international pageant). She was assigned to compete in Miss World, where she was a finalist.

In January 2018, she won the national pageant for the second time and was tapped to compete in Miss Universe. Gray immediately thought of her mother.

“When I was 13 my mother told me, ‘I had a dream you were competing in Miss Universe in a red dress and won,’” she said. “I knew I had to wear a red dress.”

And so Gray had local designer Mak Tumang create a fiery dress that was modeled after a volcano near her mother’s hometown. During her weekly “personality development” exercises, she perfected her runway walk, which features a slow-motion twirl. Her pageant coach dubbed it the “lava walk.”

“Every Miss Philippines has a signature walk,” Gray said. “And I wanted to showcase our culture.”

Once she won, #LavaWalk became a meme, with fans posting their own versions of it on social media. Vogue even wrote about her power swagger.

On top of making childhood poverty one of her platforms, Gray is also passionate about Love Yourself, a Manila-based organization that deals with the HIV/AIDS epidemic. In a country where gay marriage and divorce is illegal, Gray is proud to be an advocate for the LGBT community.

For more, continue reading the original at The New York Post.