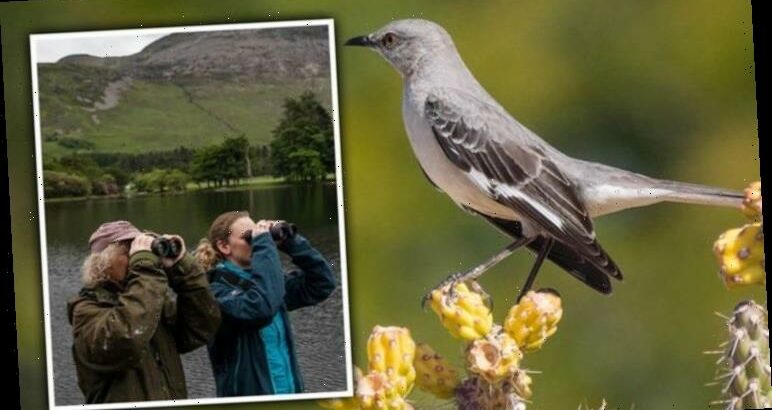 The last time a mockingbird was spotted in the UK was in the 1980s – the first in 1982 at Saltash, Cornwall, and the second in 1988 at Horsey Island, in Essex. Northern mockingbirds are the only mockingbird commonly found in North America. While they’re predominantly a ‘home bird’, some may move south in the harsh winters – so been spotted as far away as Europe is a pretty huge feat. But now Chris Biddle, from Devon, claims to have made an incredible sighting at the weekend in Exmouth, Devon.

Posting images of the bird on Twitter, he questioned whether he had in fact spotted a northern mockingbird.

He wrote: “Spotted this little chap in our garden in Exmouth over the last few days, mainly in the holly and palm flowers. We think a northern mockingbird, any ideas?”

The sighting is the first record of mockingbirds being seen anywhere in Britain or the Western Palearctic in more than 30 years – and birdwatchers were delighted with the find.

One replied to Chris saying: “Nice find Chris, fingers crossed this bird stays till spring. Or when the restrictions are lifted and we can all get to see it this wonderful bird and hopefully get a charity bucket on the go for local charity’s twitchers are quite generous when it comes to this.”

Another wrote: “Well done Chris on a excellent find, hope you enjoy your own pot of gold at the end of the rainbow.” 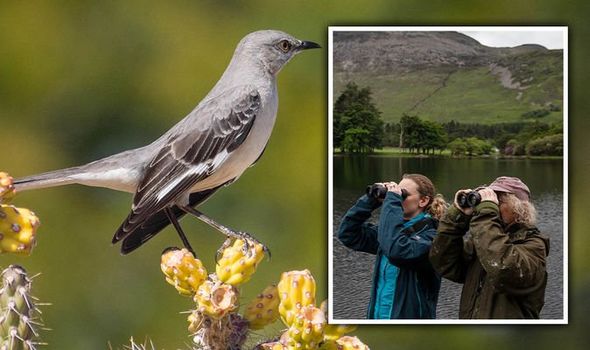 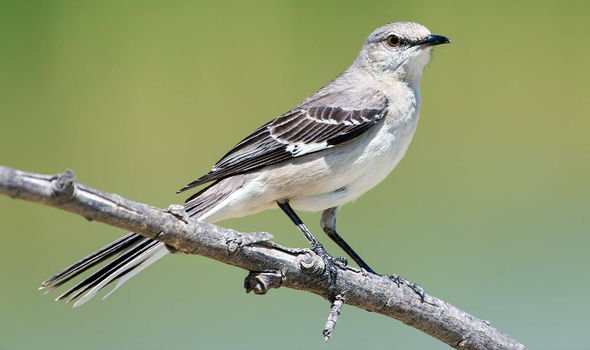 Northern mockingbirds are about 21 to 26cm in size and is grey-brown in colour, with a paler belly.

The creature is an omnivore, eating insects and fruit, and is known for its high intelligence – with a 2009 study showing the bird could recognise individual humans.

They typically live and breed in southeastern Canada, the United States, northern Mexico, the Bahamas, the Cayman Islands and the Greater Antilles.

That is, until they make a hop over to the UK to the delight of local bird watchers.

While it may be another 30 years before we seen another mockingbird in Britain, there are plenty of rare birds you can try to spot from your garden however. 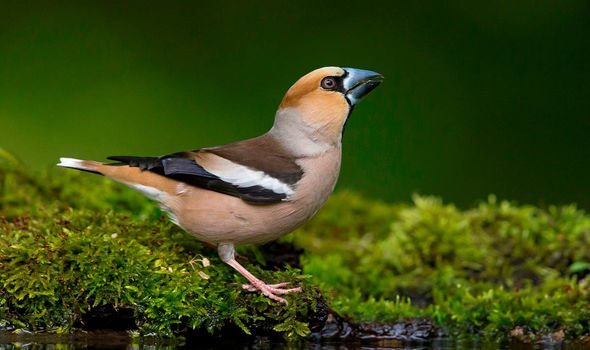 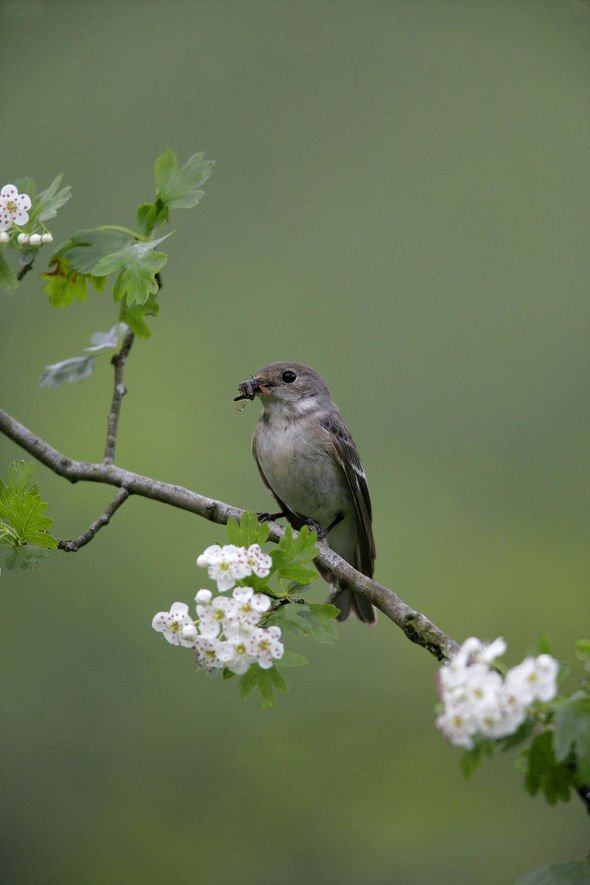 According to the Woodland Trust, there are 11 birds you should keep your eyed peeled for.

The Trust said: “UK woodland was once awash with a huge variety of bird species, but as time has gone on these species have begun to decline, becoming increasingly rare.

“The chance of spotting them is slim – but if you’re patient (or simply very lucky!) you might just stumble across one of these 11 rare birds. “ 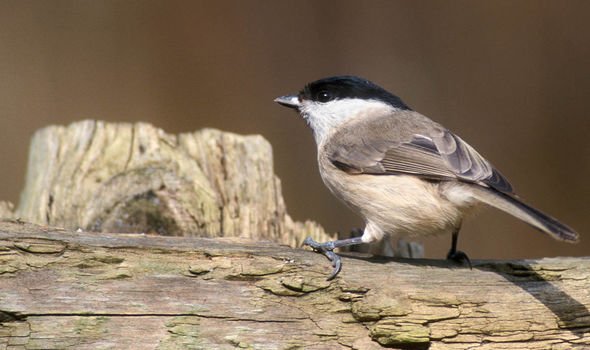 Countryfile Magazine have a slightly different list, which includes the Hen Harrier which they say “is perhaps the most iconic bird of prey in the uplands of northern England, but it is also one of the most endangered birds in Britain”.

Others listed by the magazine include the clough, a “coastal-cliff specialist” with black feathers and a red bill and legs, and roseate tern, which is “distinguished by its pale pink breast, long tail feathers, black beak with red base and two-tone ‘chivik’ call”.

Birdwatchers should also watch out for the ring ouzel – a black and white thrush which spends winters in Spain and northern Africa before returning to the UK in spring.

Or keep your eyes peeled for the incredible white-tailed eagle – a huge bird with a wingspan measuring a staggering 2.5 metres.

This majestic creature was once native to the British Isles but were hunted to extinction in Britain by the early 20th Century.

Now some 100 pairs are currently located in western Scotland and a reintroduction program has begun on the Isle of Wight. 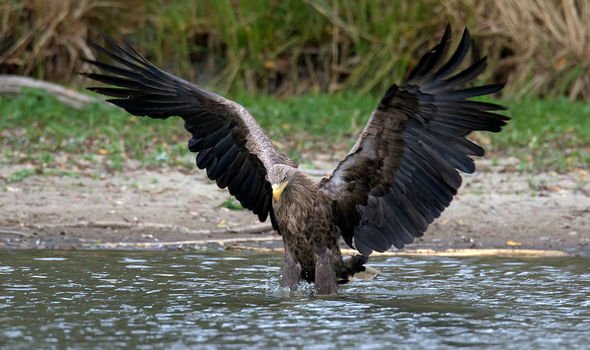 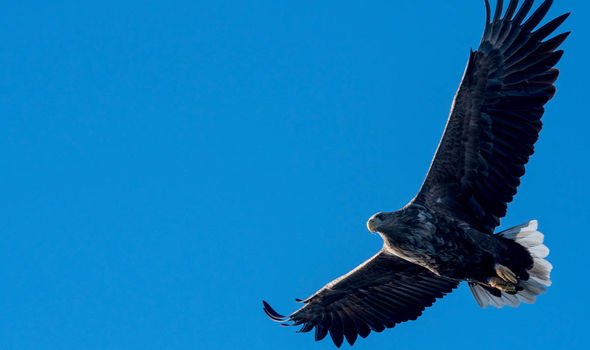 A number of Britain’s rarest birds have only become rare thanks to habitat loss, persecution and environmental change, meaning the numbers have declined over the years, according to Countryfile Magazine.

That means you need to pay special care and attention when bird watching.

The RSPB advice says you should avoid getting too close to birds, backing off if the creature makes repeated alarm calls or tries to fly away.

You should also stick to roads or marked footpaths to avoid disturbing their natural habitats.

The RSPB adds: “Playing a recording of calls to encourage a bird to respond can divert a territorial bird from other important duties. Never use birdsong to attract a species during breeding season.”