Vicky Pelletier-Primeau, 26, from Montreal, says she can no longer work out in some positions because her derriere, which has had multiple enhancement procedures, can be uncomfortable.

Pelletier-Primeau, who earns a living working as a ‘luxury companionship worker’, admits she’s obsessed with looking ‘fake’ and has been on an expensive mission to ‘bimbo-fy’ herself since she was a 19-year-old insecure about her ‘girl next door’ physique. 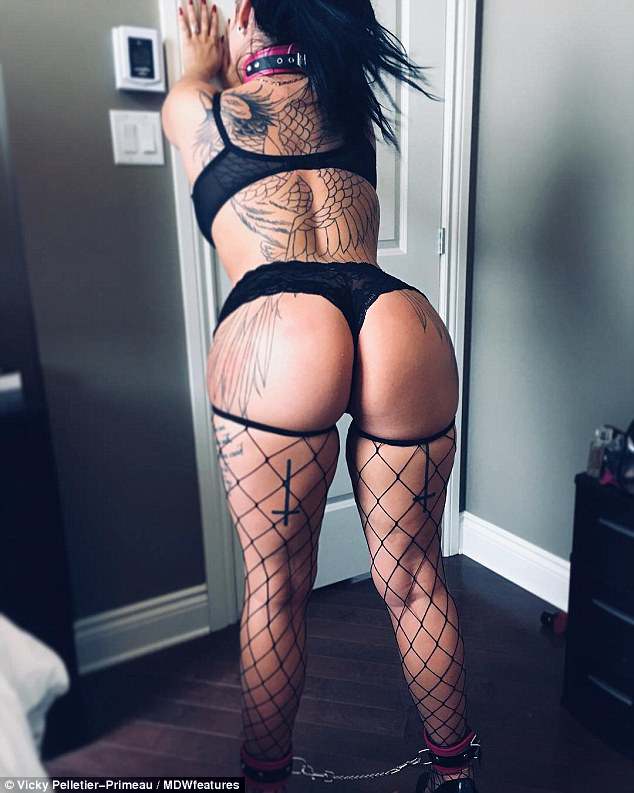 Discomfort: However, multiple enlargement procedures to her bottom have left her in pain and unable to work out in the gym in certain positions

She says that while she loves her new look, her enlarged bum is so big she finds it challenging to make some positions as she experiences pain mainly when she is at the gym or placing her body in challenging positions such as the splits.

Since she was 19-years-old she began her journey by getting four shots of butt injections that costed over $5,000 (£3,700) altogether.

Since then she has also had two breast augmentations that costed nearly $10,500 (£8,000)  increasing her bra size from 36C to 36I. She has also had laser liposuction, a Brazilian bum lift, Botox and 13 lip fillers.

Despite the numerous procedures Vicky has had, she plans on having more as she is still not completely satisfied with her look.

Botox to butt lifts: How $50,000 was spent on cosmetic enhancements

‘I found that this is totally me. This is what I love, so why not get more into it and make my body worth it?’ she said.

‘I have always liked everything plastic and fake since I was fourteen-years-old. Fake lashes, fake nails, hairs extensions etc. I’m very girly but I didn’t know that much about procedures until now.

‘I was never happy with my body because I’ve been bullied a lot by people in my life about my weight all the time. 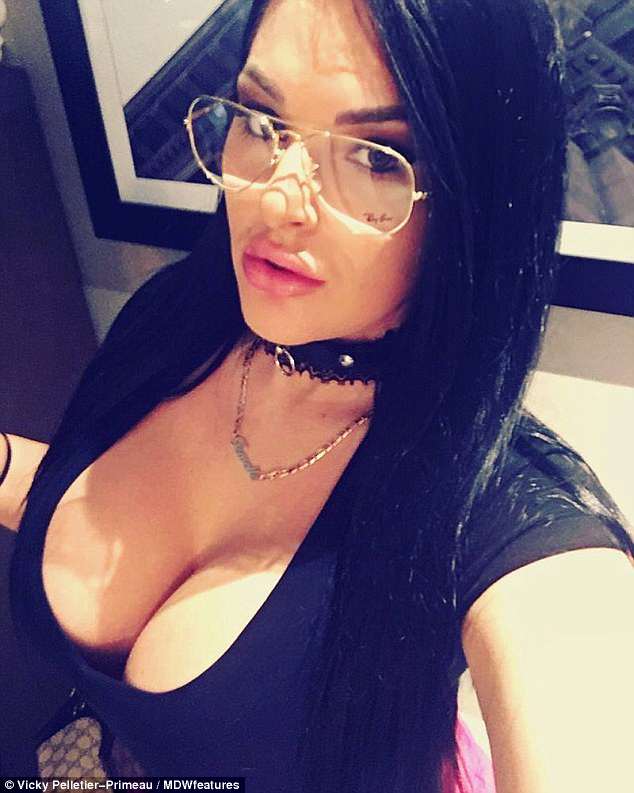 Pelletier-Primeau, who works under the name Amanda Divine, had her first dalliance with surgery at the age of 19 when she spent $5,000 (£3,700) on having injections in her bottom 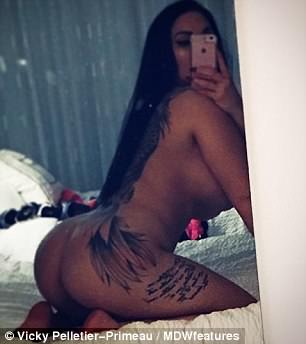 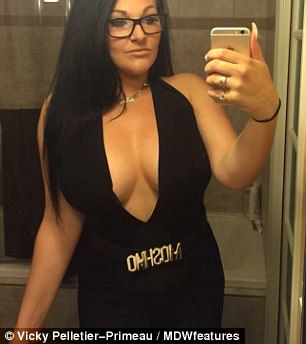 The ‘human doll’ says the initial surgery made her feel happy and she’s since spent more than $50,000 on a breast enlargement, injections in her bottom, multiple botox sessions and lip fillers 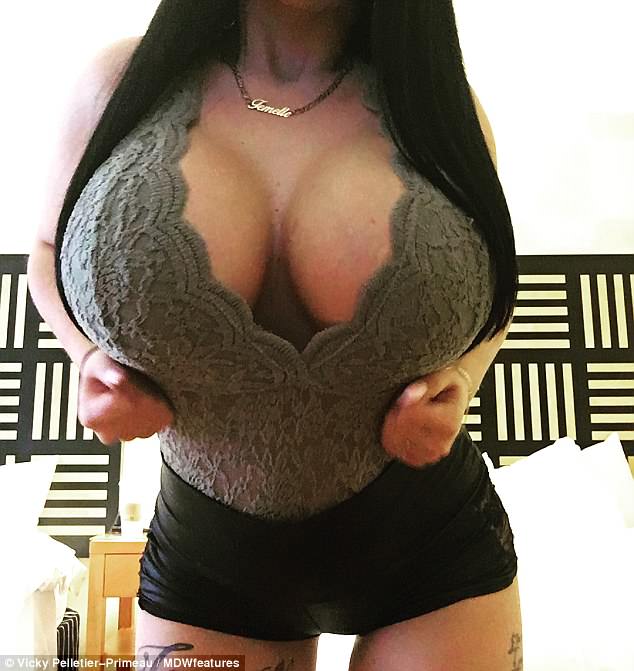 ‘My body has curves now that I can never have without a surgeon’, says Pelletier-Primeau

‘So, I began having procedures done to feel better in my body and it totally works. The more procedures I’m having done, the more confident I feel.

‘I feel like I should have done my own research on procedures before and did it from a younger age so I could have been happier and confident with my body earlier on.

‘I had my first procedure at 19-years-old. I felt very happy because for the first time in my life I have an ass and I can finally wear a dress and skirt.

‘I wasn’t wearing any of that because of the morphology in my hips was larger than my ass and that was weird.

‘I think I had about thirteen lip fillers and it was around $575 (£325) each time. I am still doing it every two months because I still don’t have the look I want to achieve.

Despite being faced with physical discomfort from her procedures, Vicky insists she wants to do more work as she doesn’t feel she has achieved the look she wants yet.

‘I feel so confident, pretty, my body has curves now that I can never have without a surgeon,’ Vicky said. 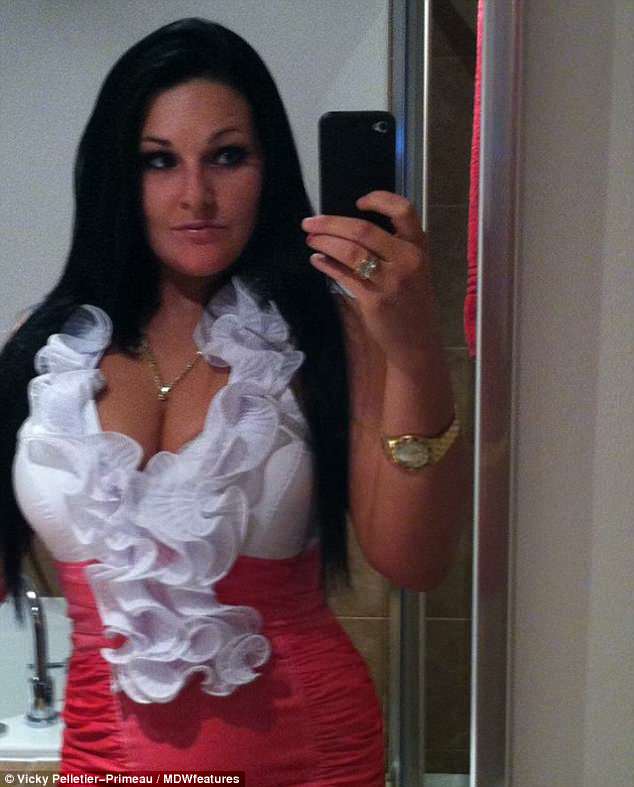 However, she says she’s also experienced the downside of surgery with her bottom now often painful, especially in cold weather, because of all the injections The surgery wish-list is still lengthy: with a nose job, more surgery on her bottom, bigger breasts, more fillers and more botox in the pipeline

‘But the negative side is my ass. I can’t do some positions because I feel pain; in the winter time I feel more pain, when I touch it, it’s warm and I have some colour marks on it which I’m trying to cover with tattoos.

‘Although it’s not always painful; it comes and goes. After all these years I have finally met a doctor who can help me with that.

‘I feel it when I go to the gym doing some exercises, for example I cannot do a split because it’s blocking me; sometimes it’s just painful for no reason – I can just sit and feel the pain.

‘I’ve asked a facial specialist if I can have some procedures; he said no to all except for my nose explaining that I’m too young for those kinds of surgeries.

‘Usually they are impressed by my breast size, but they don’t say too much overall. For me it’s very important to respect what professional surgeons say to me because I don’t want to be involved in any botched surgeries.’ 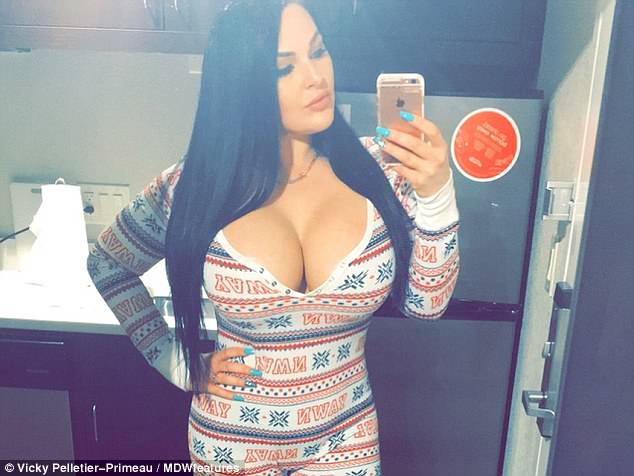 Too young: One surgeon tried to dissuade her from having more facial surgery saying she was too young to such procedures

The wish-list for more surgery is seemingly indefinite. She says: ‘In the future, I want to have a nose job, I need to remove the butt injections and maybe get implants or more Brazilian bum lifts. If I have enough fat left, I’d like bigger breasts, more fillers and more Botox.

And advice for those planning on enhancing their bodies by going under the knife? ‘Do your research. There are so many good surgeons all over the world. Don’t go for the cheapest. Sometimes cheap is good sometimes not.

‘Pay for quality you only have one body and It’s more expensive and even more painful to fix bad procedures.’