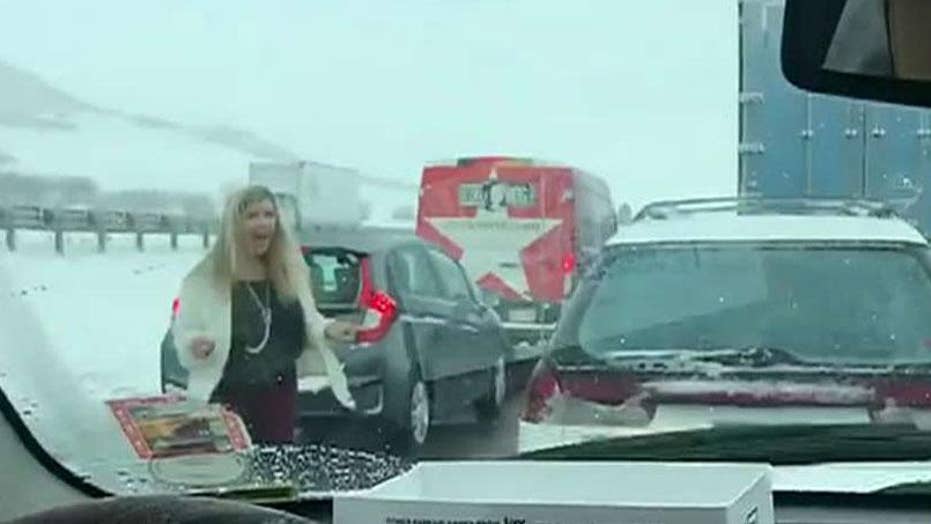 Stuck in gridlocked traffic, a daughter records her mother dancing in the street to Backstreet Boys.

One funny mom refused to let gridlocked traffic damper her spirits and hopped out of her car to dance to a Backstreet Boys tune on the highway. Though the Colorado woman evidently broke out her best moves in hopes of amusing her frustrated son, footage of the funny scene has since dazzled countless others as it has gone massively viral online.

Last week, Wendy Chupp Gossett of Colorado got trapped in with her two kids in tow for over four hours, CBS 4 reports.

WOMAN MAKES IMPOSSIBLE THROW, HITS DAUGHTER WITH FLIP-FLOP AS SHE RUNS AWAY IN VIRAL VIDEO

“We had been sitting for 4.5 hours in what looked like a zombie apocalypse on I-25 between Denver and Colorado Springs,” Gossett told the outlet of the snowy scene. “Worst backup in I-25 history!”

As snow continued falling with no clear end to the dilemma in sight, the funny mom did the only logical thing when the Backstreet Boys’ hit tune “Everybody” came on the radio. Exiting her car and sashaying into the bumper-to-bumper standstill traffic, Gossett was all smiles as she moved, grooved and danced her heart out.

"Come on! Get out of the car!" Gossett exclaimed in the clip. “This was the Backstreet Boys!”

Feeling “totally stressed” and hungry through the unexpected holdup, Gossett’s son, Nathan, didn’t appear to be too thrilled by his mom’s performance, Fox 8 reports.

“Wow it's so loud,” he says in the footage, which appears to be captured by Gossett’s daughter.

The traffic eventually lifted, and the trio were able to continue on their journey. In the days since, Gossett’s rockin’ and rollin’ routine has since gone viral on Facebook with well over 16,000 views.

The video even went so far as to reach (and impress) Backstreet Boys member Nick Carter.

Gossett, meanwhile, says that the silly stunt has also won her some unexpected street cred.

“The best part of this whole experience has been that my daughter, who is quite the private and “cool' girl, now thinks I am cool and all her friends think I am the bomb!" she told WFSA. "So funny!'