A mother who has shed more than half of her body weight following a ketogenic diet has revealed that cruel online trolls call her ‘disgusting’ and accuse her of being ‘anorexic’ now that she is a size zero.

Cindi Quinn, a 35-year-old stay-at-home mom from West Chester, Pennsylvania, had always been on the bigger side, and ever since her teens, she weighed close to 200lbs and wore a size 16.

After having her three children – Jaxson, six, Colton, three, and Penny Laine, one – with husband, Daniel, 34, her weight soared to 250lbs, and at her heaviest, she wore a size 22. 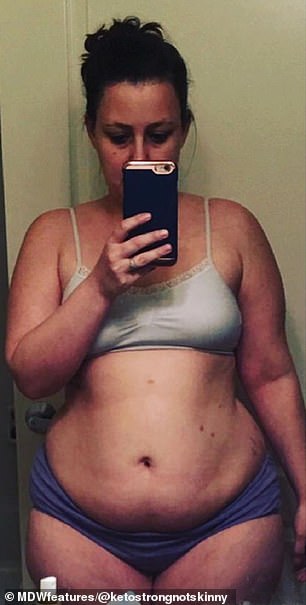 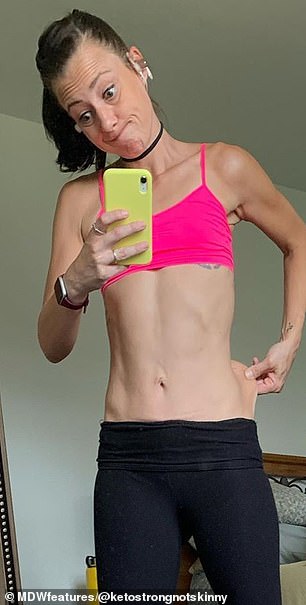 Then and wow: Cindi Quinn, 35, from West Chester, Pennsylvania, has gone from 250lbs (left) to 115lbs (right) by following a low-carb, high-fat keto diet 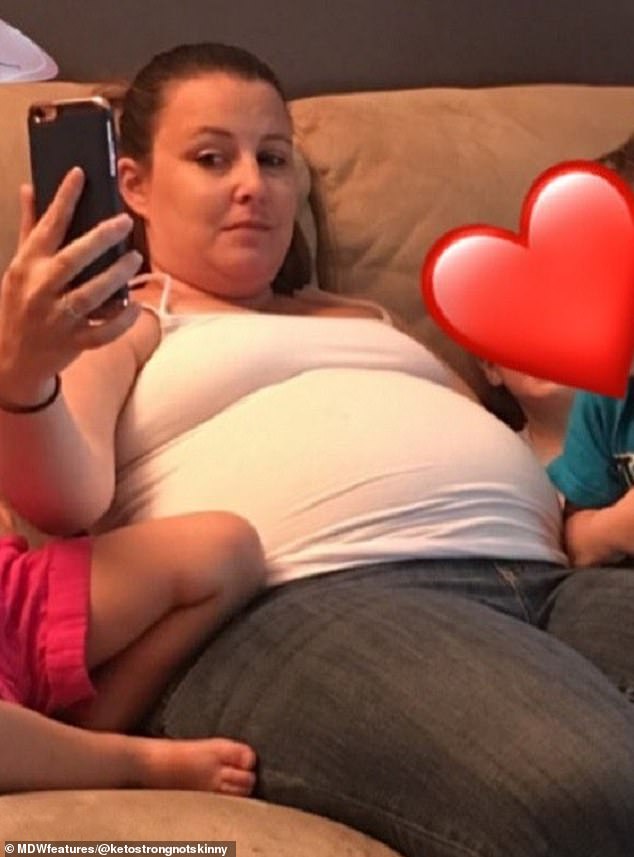 Hard to handle: Cindi had been overweight her entire life and tried various diets with varying levels of success, but she would always gain the weight back

‘I’ve always been kind of bigger and it made me feel depressed, fatigued, and like I had no confidence at all,’ Cindi said.

On average, she would consume over 3,500 calories a day, eating Pop-Tarts for breakfast and fast food for lunch and dinner.

Over the years, Cindi had tried various diets like Weight Watchers with varying levels of success, but the weight would pile back on eventually.

‘The trigger for me to lose weight was when I wasn’t able to put my child to bed without feeling like my legs were going to explode while I kneeled,’ the mother-of-three recalled.

Cindi started researching the popular keto diet and followed people on Instagram who were on the low-carb, high-fat meal plan for both tips and motivation.

‘Every time I scrolled down my feed I saw people killing it with their diets,’ she said. ‘When the weight started to drop off, every small victory felt amazing.

‘I celebrated anything and everything: getting my wedding rings back on, dropping a pant size, being able to keep up with my kids.

‘This kept me motivated and now I have more energy, strength, and confidence. I am able to run with my kids and play with them in ways I never could before,’ she added.

‘The mental part is actually the hardest. If you don’t have your mind right, it doesn’t matter what you eat, you will fail.’

The five-foot-four mom is now in the best shape of her life; she is a super svelte 115lbs and wears a size zero after losing 135lbs. 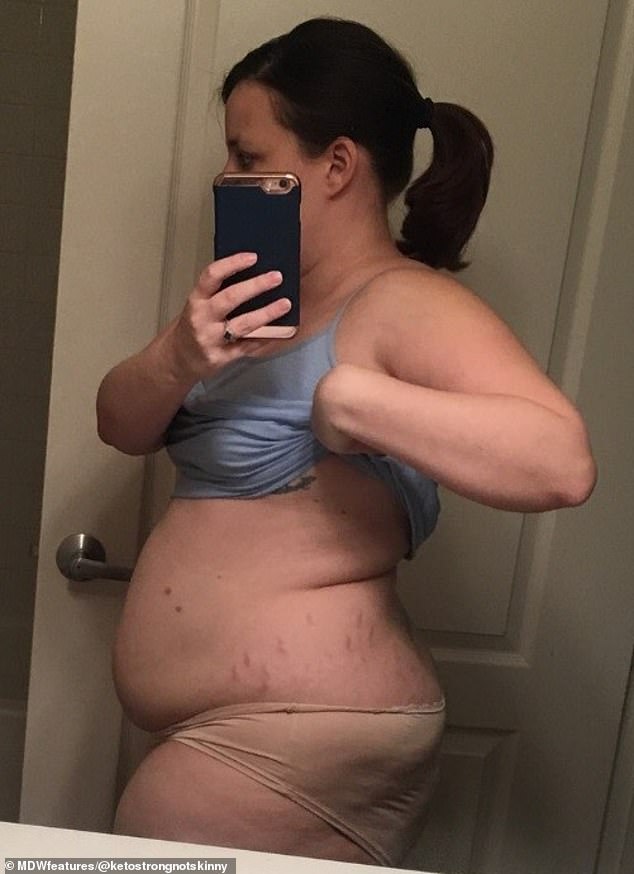 Unhealthy: Cindi used to consume over 3,500 calories a day, eating Pop-Tarts for breakfast and fast food for lunch and dinner 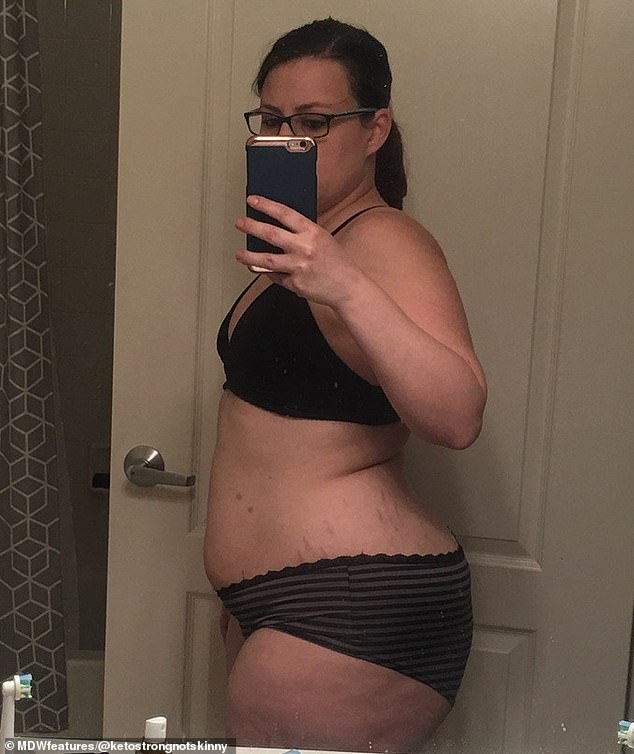 Getting toned: Cindi only started going to the gym to lift weights at the start of this year

Cindi lost the majority of her weight through diet alone and only started going to the gym at the start of this year to lift weights.

She consumes between 1,200 to 1,500 calories a day and has protein shakes for breakfast, a Caesar salad without croutons for lunch, and a dinner of lean meat or fish with broccoli, green beans, cauliflower, and Brussels sprouts.

Most people are impressed by Cindi’s transformation, but some people have told her she’s taken her weight loss journey too far.

‘I receive mostly positive comments from people who say how toned my muscles are and how disciplined I am to have stuck with this, but some people will say I lost too much because they are used to seeing a larger person,’ she explained.

‘Originally this made me feel self-conscious. My photo was spread through Instagram and people called me horrible things like “disgusting,” “anorexic,” [and] “unhealthy.”

‘I cried myself to sleep, but then I got angry,’ she recalled. ‘I worked very hard for almost three years. I am very healthy. So, I responded to the comments defending myself. I made a post explaining myself saying that I had blood work that has all improved from when I was heavier.

Before and after: Cindi now wears a size zero, but she admitted that online trolls tell her she looks ‘disgusting’ and ‘anorexic’

Take that: Cindi said people’s cruel comments about her body used to make her cry, but now she proudly defends the weight loss she worked so hard for 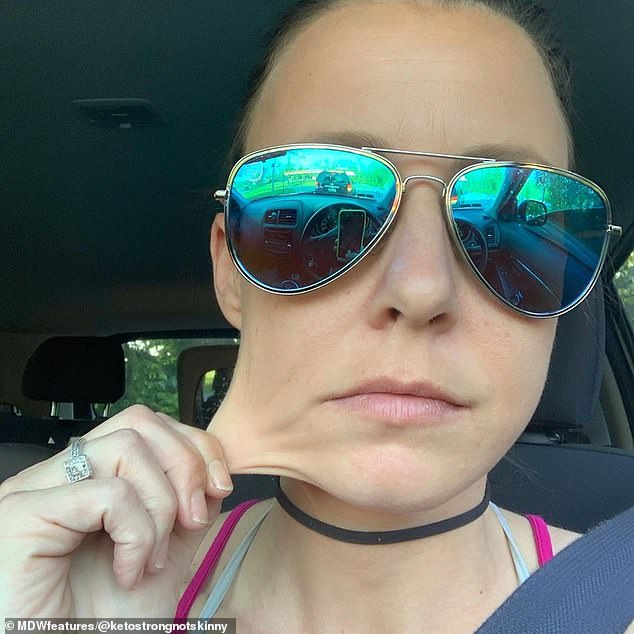 Candid: The mom admitted that she has painful loose skin following her weight loss, but she noted that it’s better than carrying around an extra 135lbs 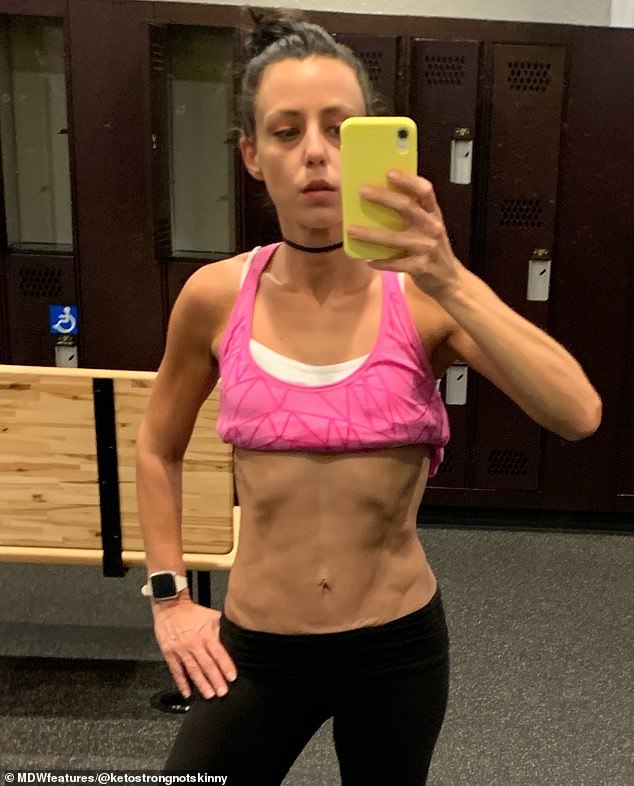 Social media: Cindi is the happiest she has ever been and she shares her story on Instagram under the handle @ketostrongnotskinny

‘Now if someone says something, I simply say ‘I’m sorry you feel that way.’

Cindi is the happiest she has ever been and she shares her story on Instagram under the handle @ketostrongnotskinny. She has been candid about the changes to her body since she lost weight.

She does have some loose skin, which is sometimes painful, but she said it’s better than carrying around the extra weight.

‘I have loose skin,’ she admitted. ‘I’m not exactly thrilled about it, but it’s better than carrying around that 135lbs. ‘It does make me feel self-conscious and uncomfortable and it’s actually quite painful.’

But her weight loss journey has been worth it, and she believes others can follow win her footsteps.

‘My advice would be to start as simple as possible and add exercise later,’ she said. ‘I didn’t start working out until a year in. Diet and exercise from the start will burn you out and make you give up.’