The federal government may strengthen an existing requirement for employers to provide safe workplaces including by stamping out sexual harassment but appears unlikely to take the approach recommended by Sex Discrimination Commissioner Kate Jenkins.

Assistant Minister to the Attorney-General Amanda Stoker said the government was prepared to change workplace health and safety laws to clarify the “positive duty” they imposed on employers. 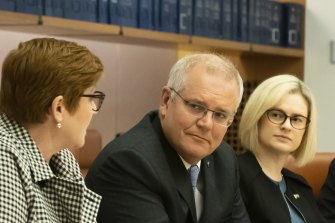 Minister for Women Marise Payne and PM Scott Morrison with Assistant Minister to the Attorney-General Amanda Stoker (right), who says there is “more than one way to skin a cat” on ending sexual harassment.Credit:Alex Ellinghausen

Ms Jenkins’ landmark [email protected] report recommended a positive duty for employers be added to the Sex Discrimination Act, with the aim of shifting from a system where the burden was on victims to make complaints to one where the onus was on employers. The government has noted this recommendation.

“We observe and acknowledge … her recommendation that … there’s room for improvement. But it’s also true to say there’s more than one way to skin a cat here,” Senator Stoker told a Senate estimates hearing on Wednesday.

“The government is very clear that it prefers the method to achieve the commissioner’s objective using a currently existing duty rather than duplicating it. To the extent that we need to amend the law to achieve that object, we will do it and we will do it gladly.”

Senator Stoker said the government was prepared to legislate to improve the clarity around the WHS definition and give businesses and employees more guidance materials “to ensure that they both appreciate the seriousness of that duty and are equipped to comply with it”.

She noted Ms Jenkins had also made many recommendations aimed at simplifying the system and said duplication would inevitably come with costs and make it more complex for people to seek justice.

The [email protected] report said since the WHS positive duty already existed, adding one to the Sex Discrimination Act would not substantially increase the burden on employers. The two sets of rules “would work in a mutually reinforcing way”.

Ms Jenkins has offered to give the government evidence provided to her inquiry relating to this point. She said it would be a missed opportunity not to add the positive duty to the Sex Discrimination Act.

Prime Minister Scott Morrison has said the government aims to introduce legislation related to its response to the [email protected] report in June. The government accepted in full 40 of the report’s 55 recommendations and either accepted in principle or noted the others.