A British mother has admitted to making a rude gesture at her toddler daughter behind her back when she’s angry.

The frustrated mum sought advice on the Mumsnet parenting site, and revealed that although her daughter never sees her raising her middle finger, her sister had told her it was an ‘appalling’ habit.

The woman, named as Legbreak, said on Mumsnet that she only ever does it at home, and that it ‘makes me feel better’.

But some shocked fellow parents told her it was a ‘horrible’ thing to do to her little girl – even if she is unaware of it. 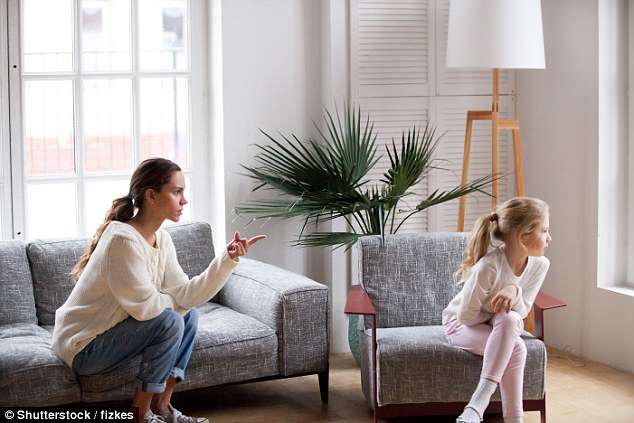 The mother reassured users that her daughter never sees the gesture, though she confesses her son thinks it’s appaling

The mother had assured readers on the forum that her daughter never sees her swearing at her, but admitted that she’d confessed her habit to her sister, who was horrified.

One user replied to agree, insisting that ‘it’s a horrible thing to do to anyone – let alone a toddler’.

Another mother said: ‘It would be better to scream in front of her than swear at her in secret – there’s an added “nastiness” in the latter that doesn’t sit right with me.’

Another person wrote: ‘I think that’s quite horrible. Would you like your toddler doing that behind your back when they’re adults and your calling them to ask for something?’

However, some were more supportive of the user and sympathised with the mother at the difficulty of keeping your patience with children

But some users were more sympathetic to the mother’s frank post, with one joking: ‘I thought everyone did this?’

Some harassed mothers shared their own questionable means of venting their frustration, like one who said: ‘Today I ran into the kitchen to escape my squabbling kids and then realised the neighbours could probably see me giving a brick wall the Vs.’

Another wrote: ‘I’ve been doing this for almost 17 years. It’s fine, she doesn’t know and you feel better.’

While a third reassured her: ‘Don’t feel bad I do this too. Daughter is 13 now and never caught me. I do it to my husband too. It relieves stress just like swearing does and is harmless. Ignore the pearl clutchers.’

One user pointed out that the daughter would probably grow up to do the same thing.

They said: ‘I remember sticking my fingers up at my mum behind her back as a teenager so I’m pretty certain it goes full circle.’