Mother captures the sweet moment her husband turns up with flowers to take his step-daughter, SIX, on their first ‘date night’ – to show her how she ‘deserves to be treated’

A mother has captured the sweet moment her husband turned up with flowers to take his step-daughter, six, on their first ‘date night’ together – to show her how she ‘deserves to be treated’.

The clip shows mother Hayley Terry, 31, from Newcastle, calling to her daughter Sophie to tell her someone is at the door for her.

Her step-father Andy, 34, decided he wanted to take the youngster to a nearby Italian restaurant for a three-course dinner, so they could spend some quality time together.

Sophie, dressed in a pink frock, is seen excitedly running to the door to find him waiting with a bunch of flowers, ahead of their date night.

But not wanting her mother to miss out, Sophie later asked if they could buy her chocolates and flowers on the way home ‘so she didn’t feel left out’. 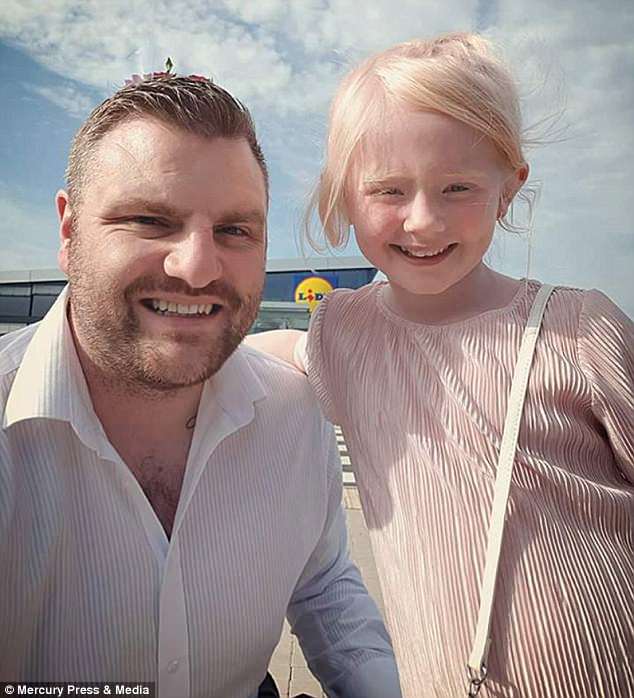 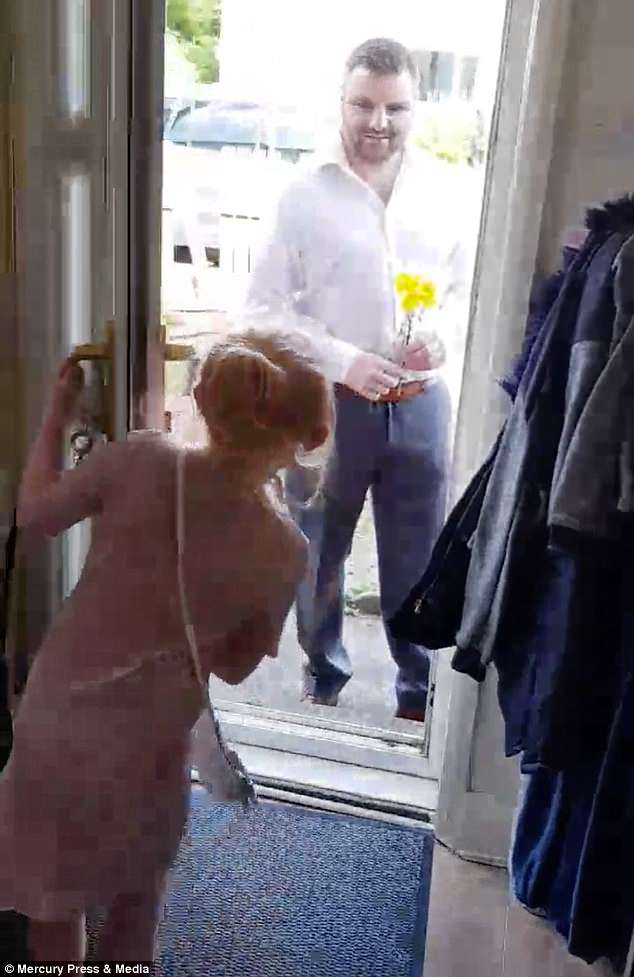 Software engineering student Andy said he suggested the date to cheer up his stepdaughter as she was upset the night before.

‘I have wanted to take Sophie on a daddy and daughter date for a while but it’s been tough finding the time,’ he said.

‘Then on the Wednesday she was upset about something and having a moment so I asked her if she wanted to go on a date to cheer her up.’

Andy said that Sophie seemed thrilled when he turned up with a bunch of flowers to take her on the date. 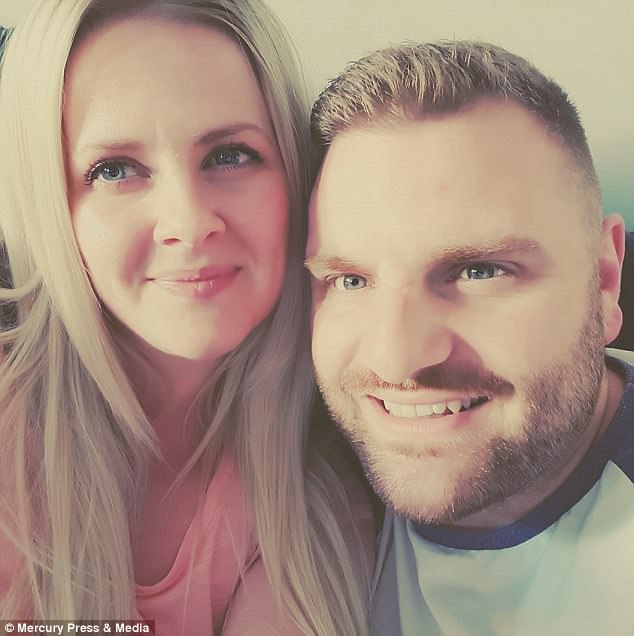 Hayley (pictured with Andy) described her husband as a ‘hopeless romantic’, and said that seeing him make Sophie so happy made her even more smitten 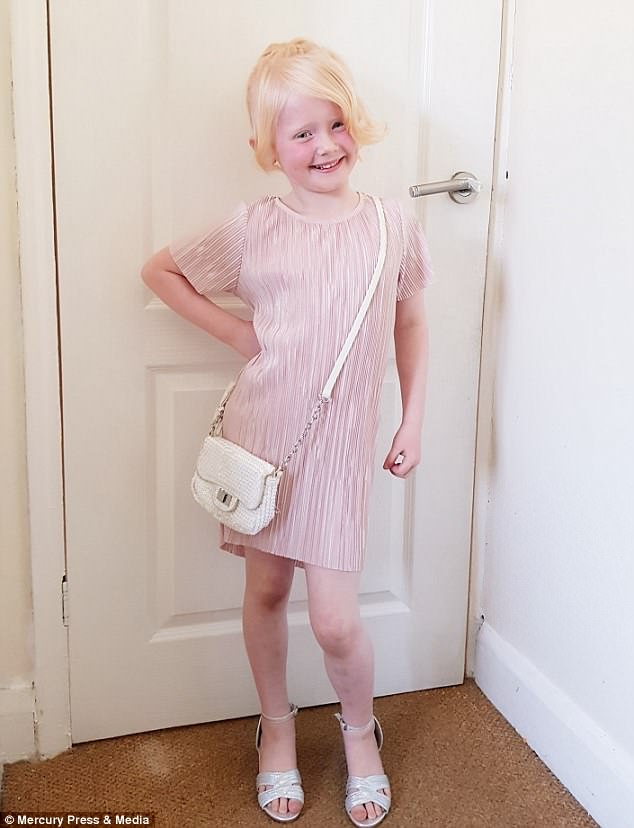 Sophie, who suffers from albinism, carefully picked out her dress for the date night 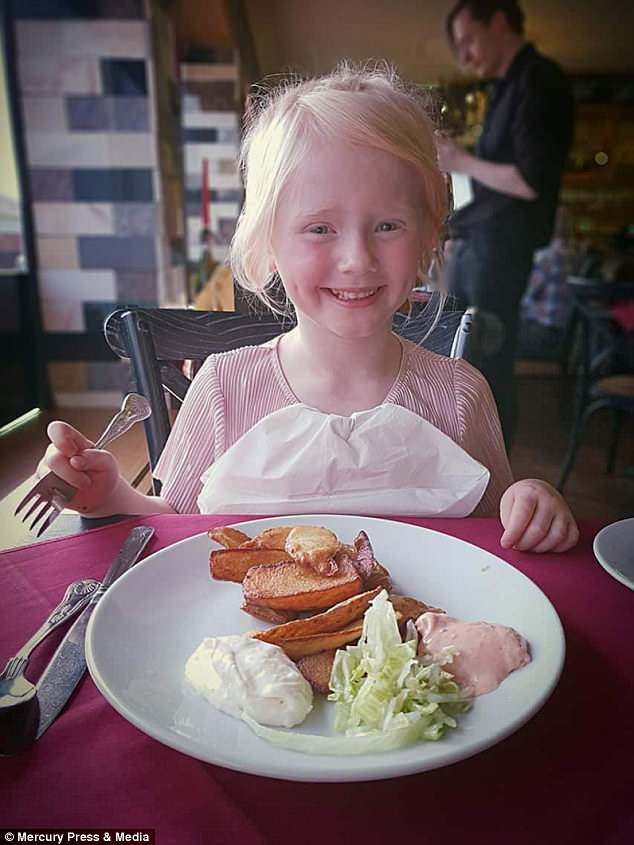 He explained: ‘I picked her up and she was dead excited and she was really happy with her flowers. I think they surprised her a bit, she didn’t know what to do with them.’

‘While we were out she was dead polite and so many people commented on how nice she looked in her outfit.

‘I let her choose her dinner and she kept asking me if this was my first date and I told her ‘”No, I’ve been on a date with your mam” and then she would say, “well this is my first date”. It was so funny.

‘It was really good bonding time for us. It was nice to be on our own and for me to really get to have a good conversation with her.’

Andy added: ‘I hope she learns from it how she deserves to be treated when she gets older and gets to that age where she is going on dates. 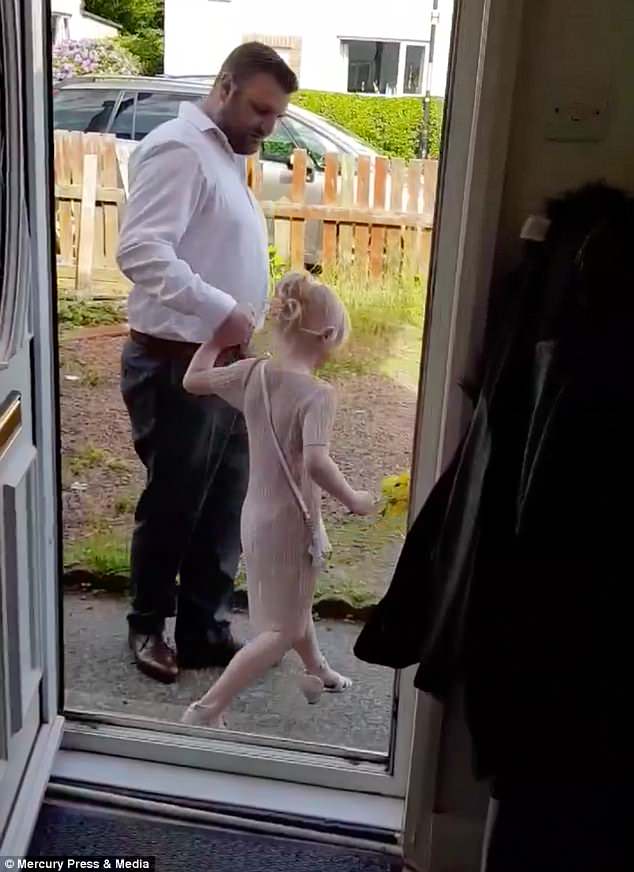 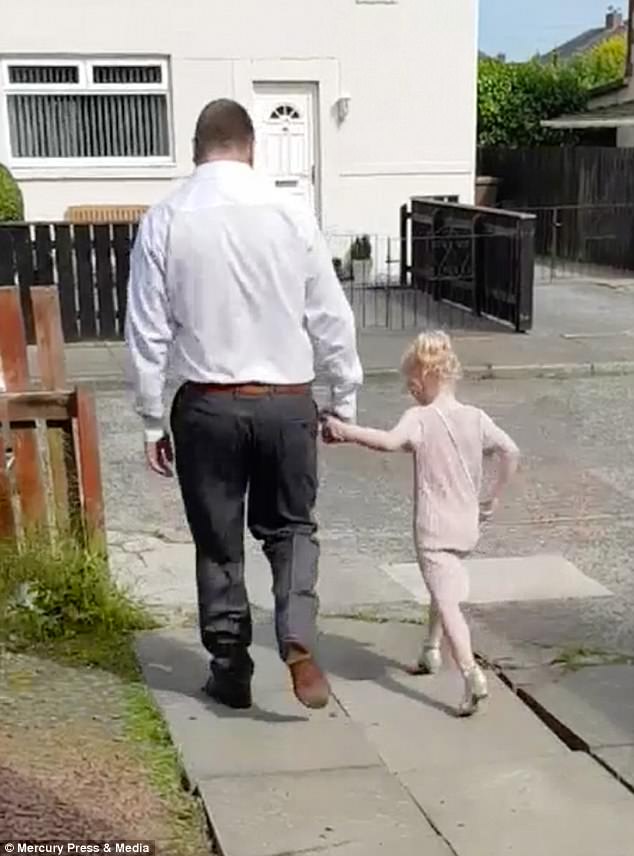 ‘I think that is so important, especially nowadays when there seems to be less respect for women. I’m a big believer in manners.’

After her step-father asked her to go on a date, Sophie spent ages meticulously planning her hair and outfit, and even asked her mum to buy her new shoes to match.

As Sophie suffers from albinism, which causes sensitivity to sunlight, she often needs to have her arms and legs covered and to wear a special pair of sunglasses.

Her mother Hayley said that being able to go out all dressed up without having to cover up made the evening even more special for Sophie.

She added that seeing ‘hopeless romantic’ Andy make Sophie so happy made her even more smitten with her husband. 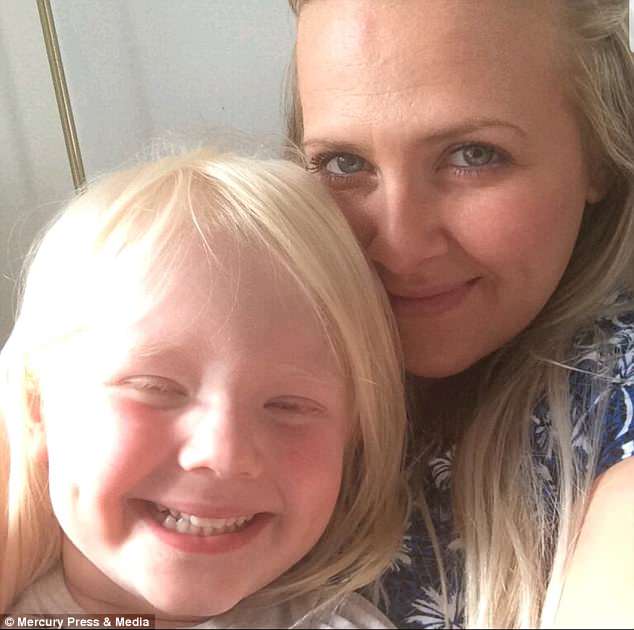 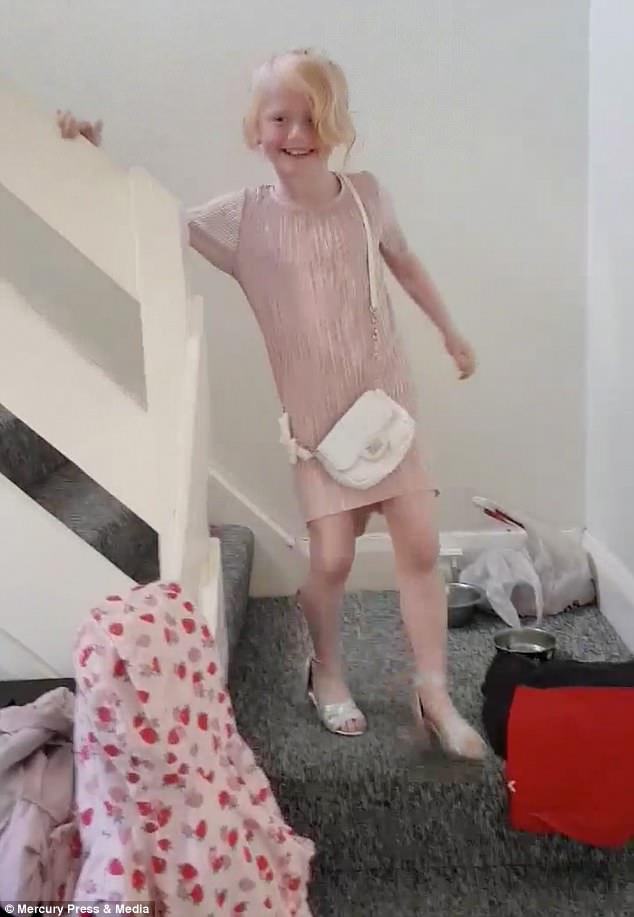 Hayley said: ‘Andy has always had such a great relationship with Sophie. We had discussed a daddy and daughter date a few times but just passing comments.

‘But then he actually asked Sophie the other night just out of the blue because she was upset. He told her he’d pick her up at 4.30 the next day after school.

‘Sophie was so excited straight away. She took it all very seriously and planned her hair and her outfit and I ended up getting her new shoes to match.’

She explained that she hadn’t planned to film the special moment, but found her phone in her hand when Andy knocked on the door – adding she’s ‘so glad’ she did manage to capture it.

‘Sophie was beaming. It was so lovely seeing her so happy as she came down the stairs. I will never forget that smile she had on her face,’ Hayley said. ‘On the way back she asked Andy if they could stop and buy me some chocolates and flowers which was so lovey. She probably didn’t want me to feel left out.’

Describing her first date with Andy, she recalled: ‘We went to an all you can eat Chinese buffet and I don’t remember any flowers so I think she had it better than me.

‘He obviously did something right though because we’re married now. He is a hopeless romantic really. He’s always surprising me with flowers or little gifts.

‘Seeing him treat Sophie so well and teaching her how a woman deserves to be treated just made me even more smitten with him.

‘I think every woman has regrets and times where she settled for less than she deserves. Hopefully if Sophie learns from a young age that she is worth more than that then she’ll never have those. 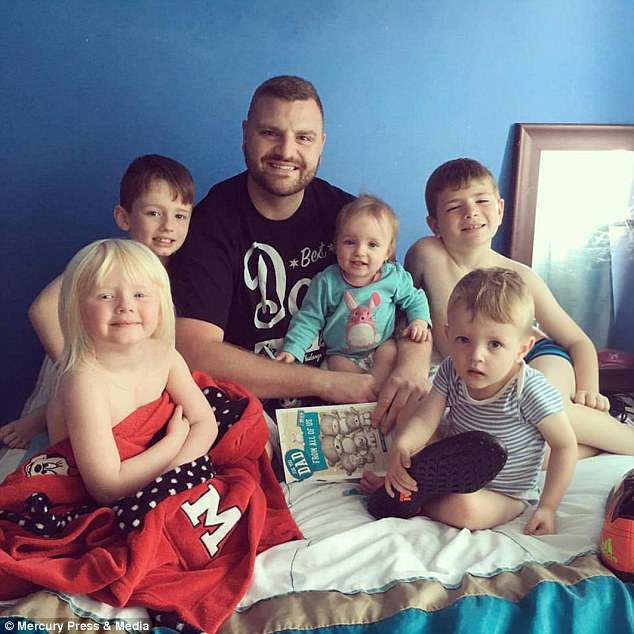 ‘You don’t see many dads going out of their way to do things like that so seeing Andy do it as her stepdad was so lovely.’

Hayley and Andy, who have been together for five years, have five children between them.

The couple said that having a large family made it difficult for the parents to spend one-on-one time with each child, so Andy appreciated having the chance to chat in depth with Sophie, who he says is ‘six going on 16’.

Following the successful date, Andy, who also coaches football, said it would be the first of many. 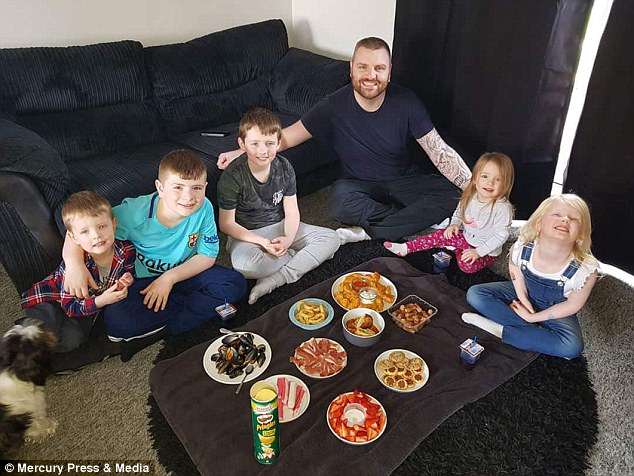 Andy explained how it can be difficult spending quality time with his children individually, which is why he wanted to take Sophie on a date night

Andy said: ‘Having five kids it can be hard getting quality time with each of them.

‘I’m a football coach so I coach the boys and I get to spend that time with them but I really wanted something that Sophie and I could do together.

‘This will definitely be the first of many dad and daughter dates. It’s her birthday next month so I think I’ll surprise her again then.’

However, Hayley was quick to remind Andy that he better start saving his pennies as their daughter Emily will be ready for date nights soon enough too.

Hayley said: ‘I know Andy can’t wait to have more daddy and daughter dates with Sophie. I think they’ll become a regular thing.

‘But I’ve told him he better start saving because Emily will be old enough to go on them soon too.

‘I really hope people watch the video and it starts a trend of dads and stepdads taking out their little girls.’