Mother, 26, who saw two GPs with a mole that had changed shape was told she was ‘anxious and stressed’ from juggling work and family – but died 55 days after finally being diagnosed with skin cancer two years later

A mother-of-two died from skin cancer after she was assured by doctors that the mole on her back was ‘nothing to worry about’, and told she was just ‘anxious and stressed’ from juggling work with raising her children.

Zoe Panayi, 26, from Newport, Isle of Wight, began to feel unwell with a pain under her ribs on her way into work as an assistant radiographer in the CT Scanning Department at St Mary’s Hospital on April 3.

After Zoe was sent home with a temperature, her mother, Eileen Punter, 59, drove her daughter to A and E at 11.30pm where doctors initially though she may have contracted Covid-19 while in contact with patients at work.

Following a CT scan, Zoe was told by her boss that her liver was ‘full of cancer’ and she would need biopsies on her ‘swollen’ lymph nodes. 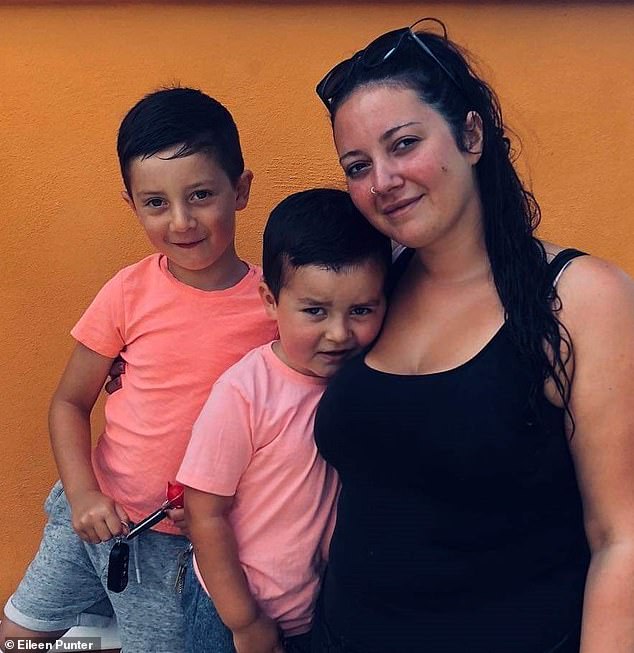 Zoe Panayi, 26, from Newport, Isle of Wight, with her children Theo-Jay, seven, and five-year-old Tobias

The results indicated that the primary cancer had started from a mole on her back, which has spread to her lymph nodes, liver, bone marrow in her spine, pelvis and spleen.

She was given the devastating news on 20 April by Dr Yeoh, an oncologist at the Queen Alexandra Hospital, Portsmouth, that she had stage 4 melanoma terminal cancer.

Zoe, mother to Theo-Jay, seven, and five-year-old Tobias, passed away on May 29 at The Earl Mountbatten Hospice just 55 days after she was told the mole was malignant.

And now Eileen and Zoe’s step-father Stuart Punter, 53, have started a petition to change the law making the testing of all skin tags and moles ­regulated and mandatory. 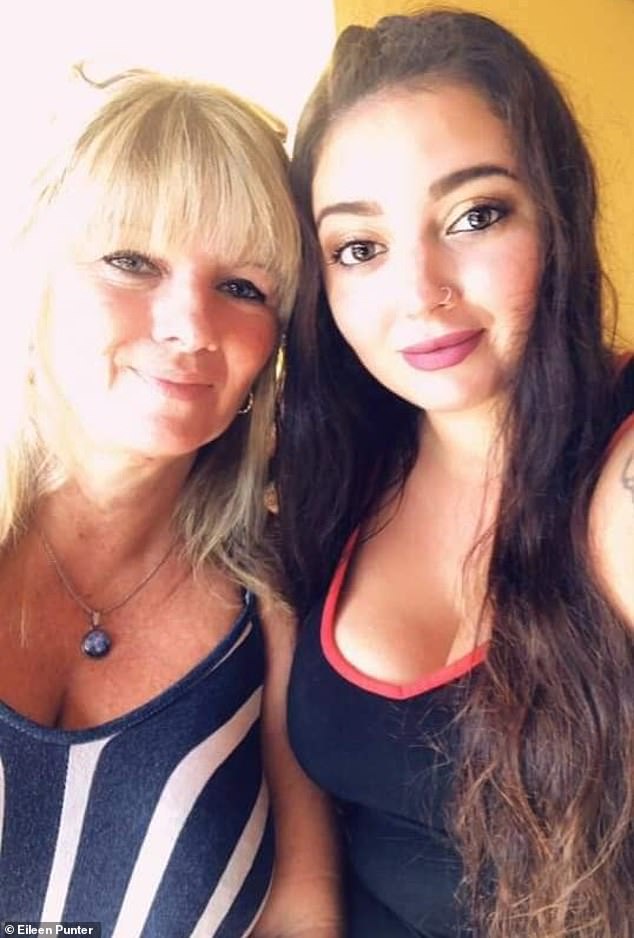 Mother Eileen Punter, 59, (pictured with Zoe) drove her daughter to A and E at 11.30pm where doctors initially though she may have contracted Covid-19 while in contact with patients at work

Speaking to FEMAIL, mother-of-three Eileen said: ‘Zoe had a mole in the middle of her back so it never saw sunlight and she was the only one out of her siblings who didn’t really like the sun.

‘She would never go in the sun, never sunbathe, never used sun beds and it was on her back so the melanoma wasn’t from sun damage.’

Eileen explained how two years previous to her diagnosis Zoe went to see her GP after her mole had ‘changed shape’ becoming ‘bobbly’, ‘very itchy and sore’.

Recounting Zoe’s first appointment, Eileen: ‘The doctor just looked at it and said it was nothing to worry about it – is just like skin tag. 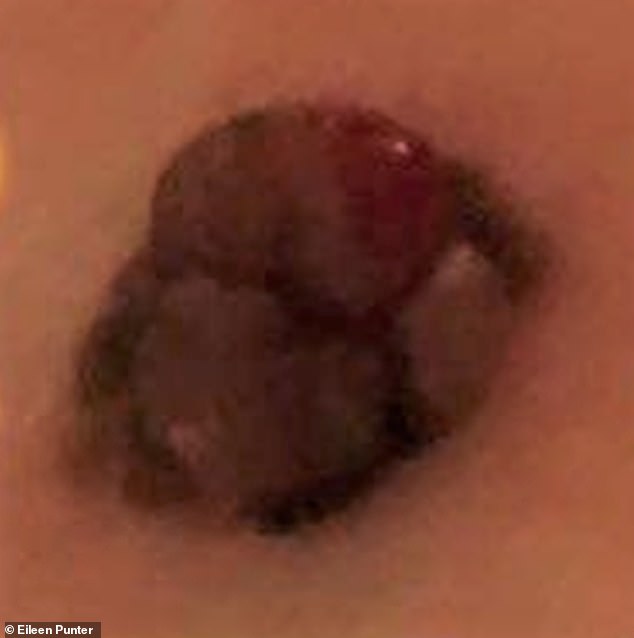 Zoe had a mole in the middle of her back (pictured). Eileen said: ‘It never saw sunlight and she was the only one out of her siblings who didn’t really like the sun’

‘The doctor said: ‘I think you are quite anxious Zoe so I am going to prescribe you some sleeping pills and anti-depressants.’

Eileen revealed how the GP informed Zoe that her blood readings were raised because she carried the beta thalassemia trait, a blood disorder which reduces the production of haemoglobin.

Former carer Zoe was told that her readings showed an infection in the body, caused by anxiety from ‘juggling a young family and work’ and was also prescribed antibiotics.

However, still concerned about the changing appearance of the mole, Eileen accompanied Zoe to another appointment with a different GP. 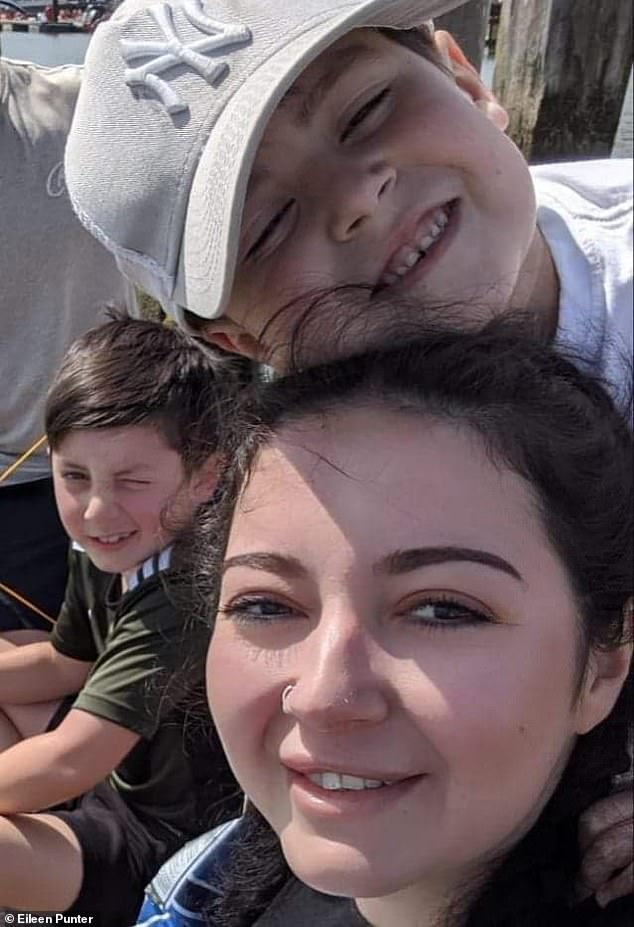 Zoe, mother to Theo-Jay, seven, and five-year-old Tobias, passed away on May 29 at The Earl Mountbatten Hospice just 55 days after she was told the mole was malignant

She said: ‘The second GP looked at it and said, ‘It’s just a skin tag, I am not worried about it. But if it is itchy go to a cosmetic clinic and ask them to remove it.’

The doctor told them that, due to funding, the mole wasn’t sent to a laboratory for testing and reassured them that, in her opinion, it didn’t look ‘dangerous’.

Eileen booked Zoe in at a private cosmetic clinic, following advice from the GP, and paid £195 for the mole to be removed where the specialist also told her it was just a ‘skin tag’ and shaved it off.

‘The oncologist later explained to us that if we had told her it was a £40 treatment she wouldn’t have been surprised if they had shaved it off and binned it,’ Eileen said. 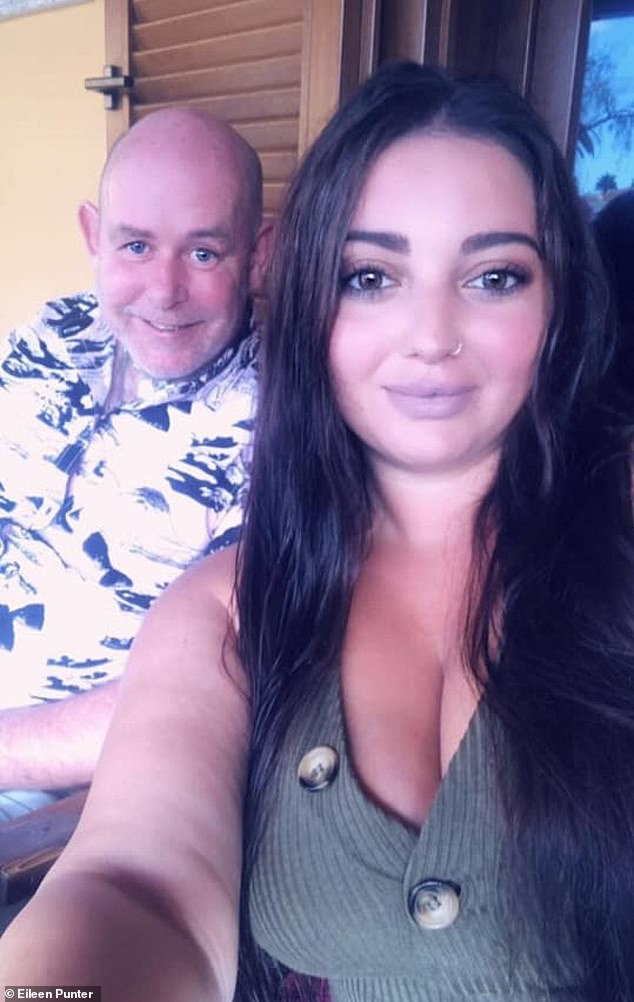 Stuart (pictured with Zoe), who Eileen praised as the father figure in Zoe’s life, said: ‘It would mean everything to have the petition made into a law. We have sadly lost Zoe but her life wouldn’t have been in vain’

‘She was shocked that we had paid £200 and that it wasn’t tested, they just threw it away and by touching the mole it triggered it to become much more aggressive as the root was not removed.’

‘We didn’t realise how deadly and secretive the disease was. It spreads internally, quietly attacking all of your major organs and there is no cure for it – it is terminal. All they can do is try and suppress it.’

Following the diagnosis, Zoe started immunotherapy treatment and moved in with her mother and step-father Stuart along with her two children.

Eileen said: ‘She was only home for about a week after she reacted quite badly to the immunotherapy and the cancer was spreading by the hour – it just went everywhere, other than her brain, and 55 days later from being diagnosed she died.’ 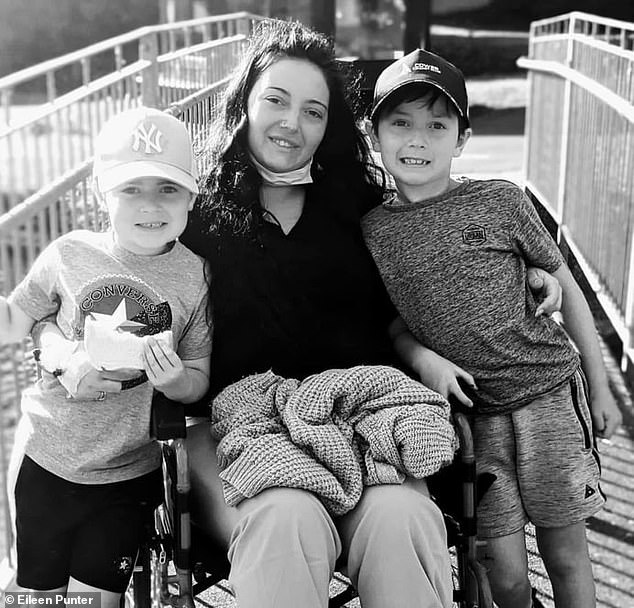 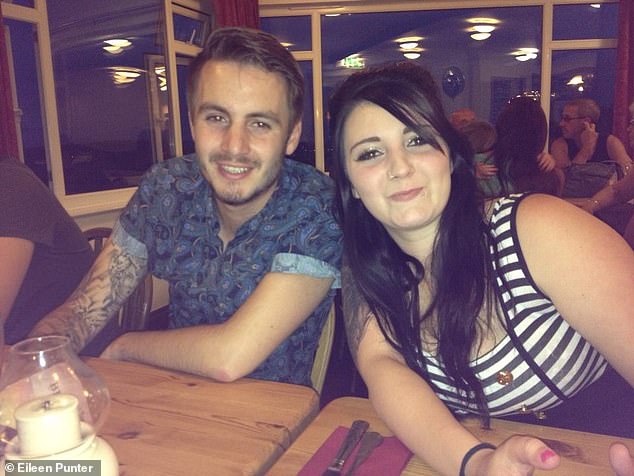 Zoe was heavily involved in the organisation of her funeral on June 19. Pictured: Zoe with her elder brother Charlie, 30

Speaking about Zoe’s courageous nature throughout her cancer battle, Eileen added: ‘The pain was unbearable but she never complained.

Zoe was transferred to The Earl Mountbatten Hospice at the end of April with Covid-19 regulations meaning her children were not allowed to visit their mother in her room.

Eileen spoke of the heartbreaking moment that doctors told Zoe that the cancer was ‘moving by the hour’ and doctors allowed her to say her goodbyes to Tobias and Theo-Jay. 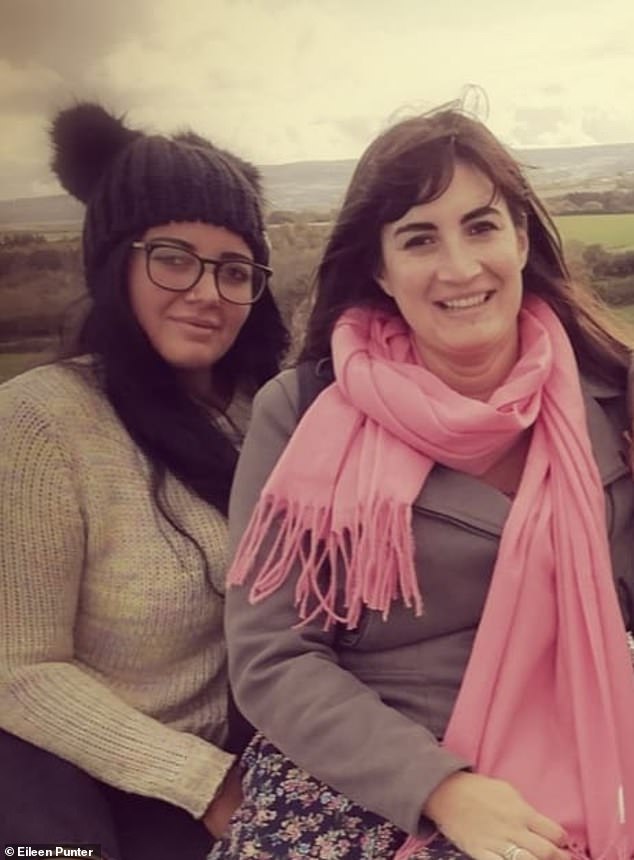 Zoe pictured with her sister Marie, 28. Speaking about the petition, Eileen said: ‘Zoe told us that she wanted us to do something because she didn’t want anyone else going through this’

She added how Zoe was heavily involved in the organisation of her funeral on June 19 and planned videos, songs and even a guest list amid Covid-19 restrictions meaning she was only allowed 28 people.

‘She wanted a festival celebration for all her friends and their children which will go ahead after restrictions are lifted,’ Eileen said.

‘The hospital even screened the service and her colleagues booked out the chapel while socially distancing so everyone she worked with could watch the funeral.

‘And all of those that couldn’t go into the chapel sat around the duck pond at the hospital and watched it on their phones. They were absolutely fantastic.’ 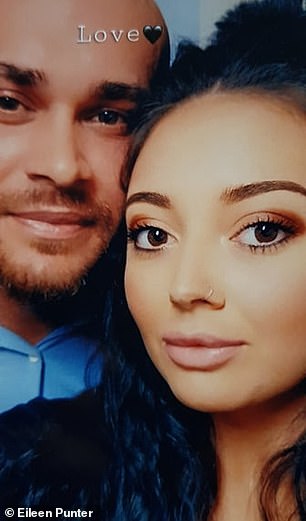 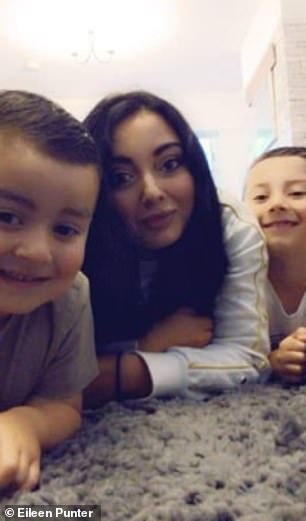 Eileen spoke of how all three of her children were a ‘gift from God’ following her ten-year struggle with endometriosis to become a mother.

She said: ‘At the beginning of this year I thought ‘2020, that is a good number’. Zoe finally has the job she absolutely loves and she was so happy with her partner Luke.

‘Things were looking really good and it has just been an absolute nightmare.’

Speaking about the petition, Eileen said: ‘Zoe told us that she wanted us to do something because she didn’t want anyone else going through this. 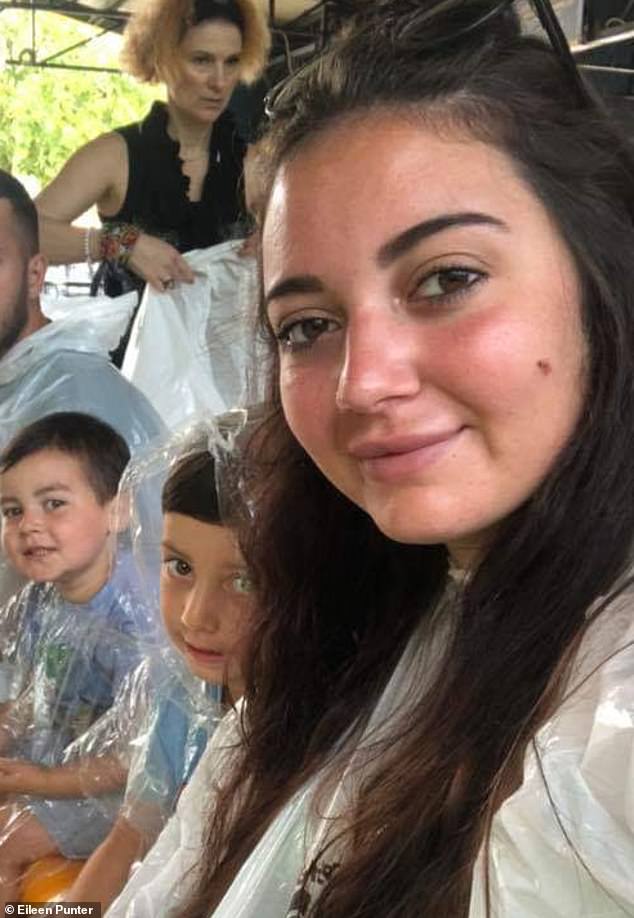 Eileen described Zoe (pictured with sons Theo-Jay, seven, and five-year-old Tobias) as ‘beautiful’ and ‘an angel’

‘Stuart said we need to do what Zoe wanted and make it ‘Zoe’s law’ after she asked us to do what we can so no one else suffers like this.

‘She was beautiful, an angel at home, the best child and the easiest child to bring up – she was always happy. She just loved everyone and would help anyone out.’

Stuart, who Eileen praised as the father figure in Zoe’s life, said: ‘It would mean everything to have the petition made into a law. We have sadly lost Zoe but her life wouldn’t have been in vain.

‘I had a special bond with Zoe that has been taken away before it should have been.’ 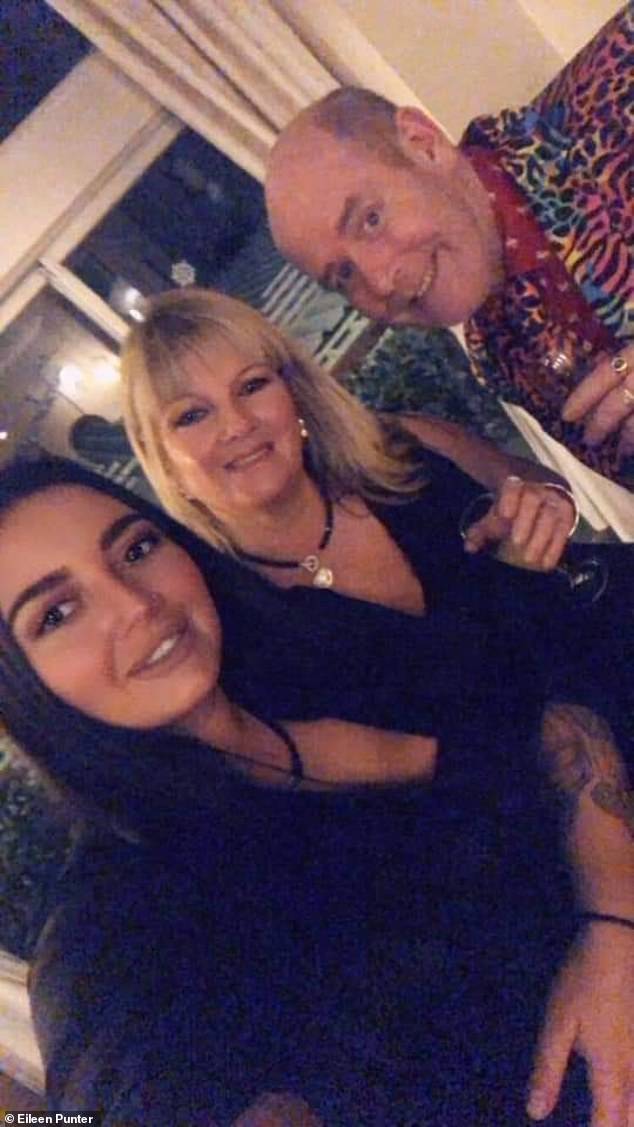 Stuart (pictured with Eileen and Zoe) said: ‘I had a special bond with Zoe that has been taken away before it should have been’

The petition has since garnered 12,536 signatures with an aim of reaching 15,000 and has the backing of Isle of Wight MP Bob Seely.

Stuart added: ‘We have had a couple of people message us saying they have signed the petition after they were concerned about a mole and they have been referred to a clinic.

‘It is starting to make a difference and many people didn’t realise that it wasn’t already law.’

WHAT IS MELANOMA AND HOW CAN YOU PREVENT IT?

Melanoma is the most dangerous form of skin cancer. It happens after the DNA in skin cells is damaged (typically due to harmful UV rays) and then not repaired so it triggers mutations that can form malignant tumors.

Around 15,900 new cases occur every year in the UK, with 2,285 Britons dying from the disease in 2016, according to Cancer Research UK statistics.

The patient can decide to use a skin graft if the surgery has left behind discoloration or an indent.

This is needed if the cancer reaches stage III or IV. That means that the cancerous cells have spread to the lymph nodes or other organs in the body.