Kate, 39, has had three hours in the last five days when all her six children have been asleep and has TWO sets of twins under two – how does she juggle them with running a booming business?

There has been, says Kate Ball, just one three-hour window in the last five days. Just three hours in which her six children — Alfie, seven, Grace, five, 20-month-old twins, Emily and Olivia and newborn twins Poppy and Amelia — were all asleep at the same time.

And yes, you read that right: the birth of babies five and six two weeks ago means she has four girls under the age of two — a double helping of doubles — making her family not only very large, but also very rare.

The Royal College of Midwives put the odds on having two consecutive sets of twins, so quickly, at 700,000 to one. 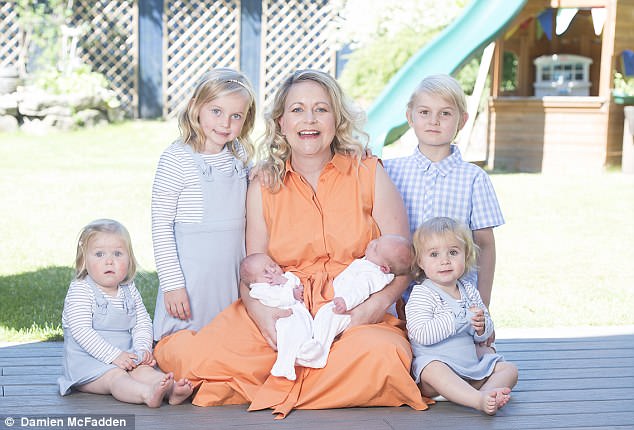 Kate Bell, 39 from Leeds, is a mother of six including two sets of twins both under the age of two (pictured)

‘In hospital we had lots of midwives popping in to ask: “Are you the lady with two sets of twins?” Lots of women have lots of children, we were told — there was one lady in there having her tenth — but it’s having double twins that makes us so unusual.’

They all look perfectly angelic, but you’d forgive the eldest twins, suddenly usurped, for finding the whole situation rather trying.

‘Alfie and Grace came into hospital separately to visit the new twins and hold them, and that was lovely and easy. And then the midwives very kindly set aside a day room for us so that the first twins could meet the second twins — and that was chaos.

‘I was in a ward with three other mums, and I thought, oh no, this is going to put them off the whole thing forever.’

As the Daily Mail’s reigning Mumpreneur of the Year — the winner of the 2017 Aphrodite Award, part of the NatWest Everywoman Awards for inspiring businesswomen — Kate, 39, knows a thing or two about multi-tasking. But six children under eight, plus an expanding business and staff to manage, might be an ask too far, even for her. 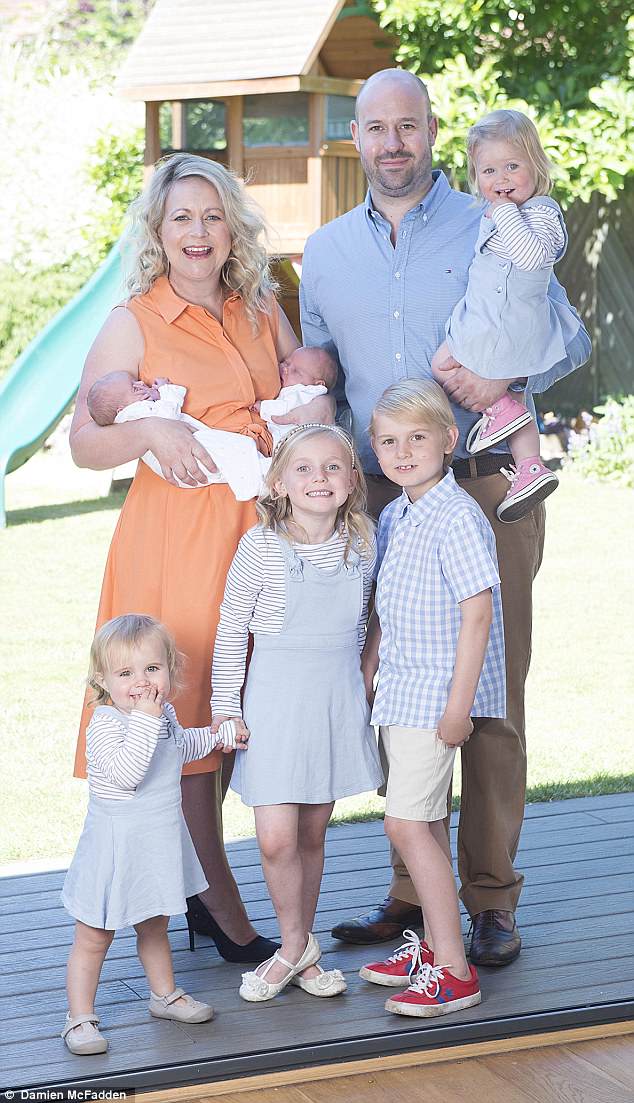 She balances looking after the children with running the company she founded, together with her husband Matt (pictured)

‘The reality is you can’t switch off completely when it’s your own business. When I was in the ante-natal ward waiting to be induced a fortnight ago, I was on my emails sorting out a problem. But now the girls are here, the rest of the team are trying hard to keep it all away from me. I’m being ring-fenced.’

When the office HQ is in an annex to your house, however, it’s hard to ignore a mini-crisis.

‘I overheard them all in the garden discussing a problem the other day, and I was itching to get involved.’

She’s even been known to post on internal social media under her husband Matt’s name so that the others don’t know she’s working.

Kate launched her Leeds-based business, Mini First Aid, when Alfie and Grace were toddlers, and has grown it over the two subsequent pregnancies with twins.

She now has 52 franchisees around the country, teaching child and baby first aid techniques to people in village halls, soft play centres and living rooms. 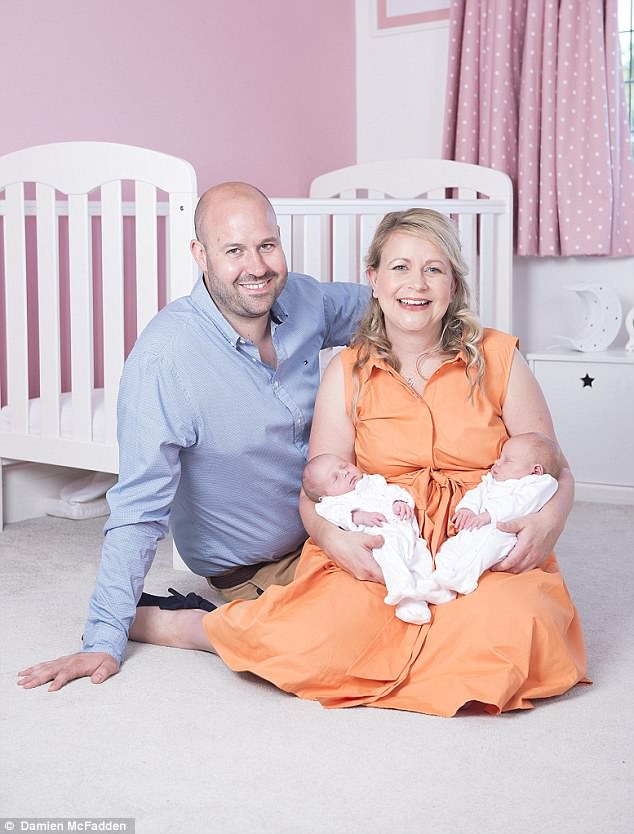 With her office HQ in her house, she finds it difficult to stay away from her successful business

Thanks to Mini First Aid, mums-to-be in NCT groups, grandparents at friendship clubs, and even primary schoolchildren, now know how to recognise the symptoms of meningitis, how to make a sling and perhaps crucially, how to perform CPR, the technique that can restart a heart.

It was the devastating death of her younger brother, also called Matt, that in part drove her on. Aged just 23, while celebrating the end of his university exams in Southampton, Matt collapsed and died of heart failure as a result of the condition cardiomyopathy, which no one knew he had.

Often hidden, bar the occasional bout of greyness or breathlessness, cardiomyopathy weakens and damages the heart and in the worst cases proves fatal. Though it’s unlikely Matt’s death could have been prevented, its awful suddenness made Kate think about the way people react to life-threatening emergencies and how ill-equipped most of us are in basic first-aid techniques. ‘What it taught me, looking back, is that bad things can and do happen. People can very easily think they’re immune to tragedy, but no one is.’ 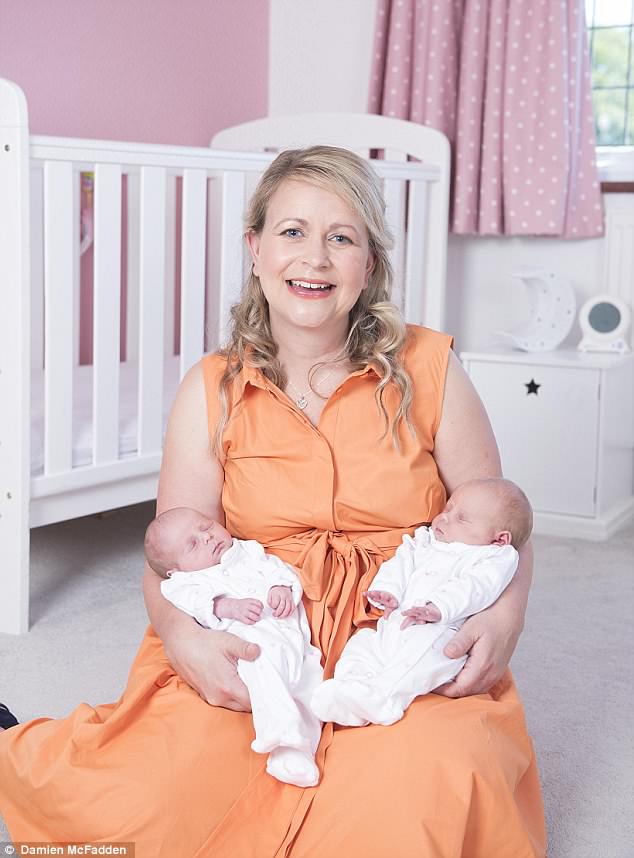 She even posts on internal company social media under her husband’s name, so her staff don’t realise that she is working

Her mission isn’t to stop all accidents happening, but to make people better able to cope when they do — and even to save a life.

‘The book is based on advice from specialist paediatricians who’ve dealt with very traumatic choking incidents. And the message for parents is: don’t let your two-year-old run around while they’re eating because that’s when they don’t chew.

‘Grown-ups are terrible for doing it — we eat all the time walking around, wolfing food on the go. But that can be really dangerous. Children need to sit down at a table when they eat.’

Winning the NatWest Aphrodite Award, for the most successful business started by a woman while her children were under 12, has ‘opened lots of doors’, she says. ‘What it meant is that we could talk to businesses we perceived to be bigger than us. They saw we’d won and they thought, yes, we need to talk to her.’ It’s the cachet of the awards, she says, that gives winners the confidence that others will take them seriously. 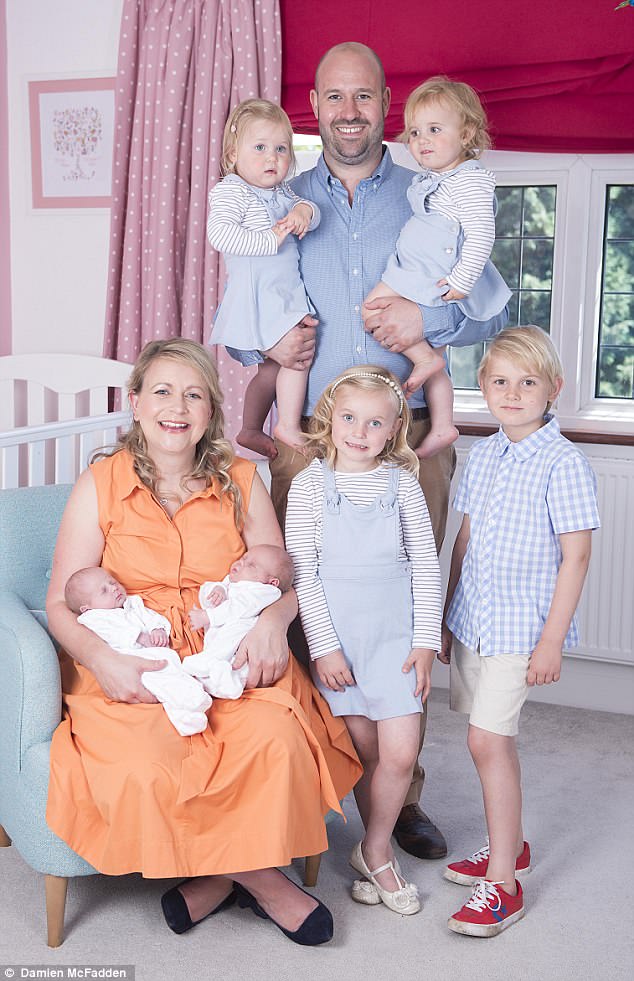 ‘It starts a dialogue we’d never have had before. We’ve also done some work with other women I met at the awards ceremony last year — a bit of joint marketing, for example, which helps us all. I think I’m known as the nutcase who was pregnant with babies five and six at the time . . . ’

Though she laughs now, it’s not been plain sailing with the newbies. At 6lb 12oz, Poppy was bigger than her sister Amelia, who was born at full-term but weighing just 4lb 6oz and needing specialist care. ‘They look very similar,’ she says. ‘Poppy’s just bigger and rounder, like she’s eaten Amelia.’

You sense it’s not in Kate’s nature to let black clouds linger for long, and now she talks of Amelia’s week in hospital, at first in a neo-natal unit, in a breezy, no-nonsense manner.

Yet having a tiny newborn whisked away from you and attached to ‘lots of bells and whistles’ in a special care ward is surely terrifying.

‘We knew it was going to happen because we’d been told that she was teeny and they’d need to help her with feeding and oxygen for a few days.

‘I’m not the kind of woman who really wants soft lighting and gentle music when I give birth, which is a good thing because the room was full of people in uniforms. They must have been queuing outside; there were at least ten of them. 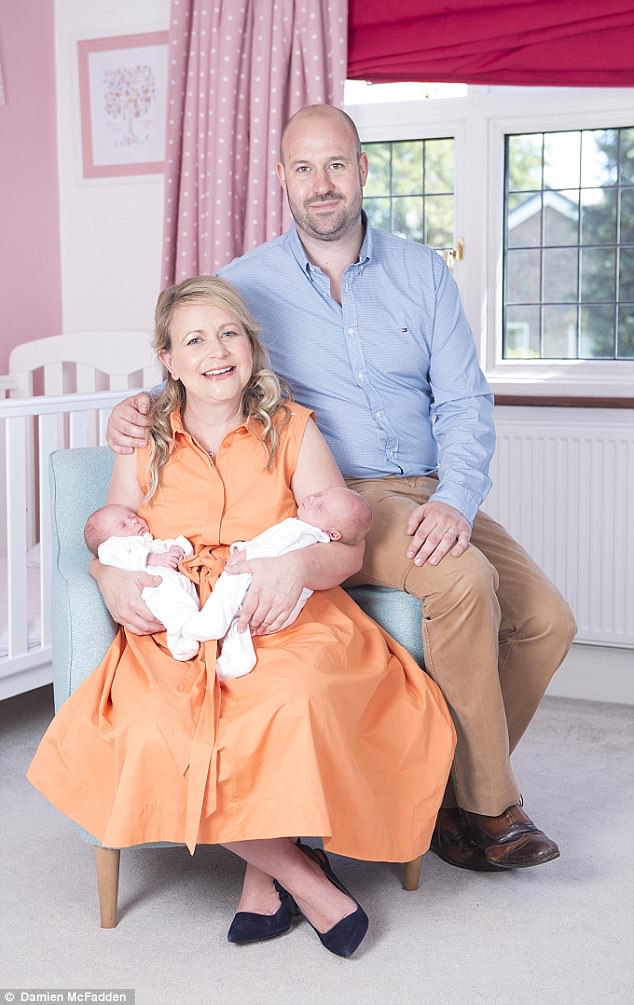 ‘Afterwards the worst thing was the girls being on separate wards, so I had to go between two floors to see them both and I wasn’t walking very well because I’d had joint problems throughout the pregnancy.

‘But Amelia was always in an open cot, not an incubator. I could hold her and they let me feed her once a day.

‘And having to stay in hospital meant at least I got a week’s forced bedrest, like women used to have, which was really very welcome because obviously it’s quite hard to get rest at our house. I did a lot of online shopping, it was lovely.’

On the day she got home, indeed, Kate was in the garden putting in plants she’d ordered from her hospital bed. ‘Well, they couldn’t just sit there. They had to go in.’

Two weeks in, the family’s nanny cares for the older set of twins on weekdays from 9am to 5pm. Weekends, early mornings and evenings, Matt and Kate ‘co-pilot’ — though of course on very little sleep. ‘I’m getting bits here and there,’ says Kate. ‘When the little twins are asleep the big ones want to clamber all over me, so it’s hard.’

Plus, there’s Grace and Alfie to spend time with too. 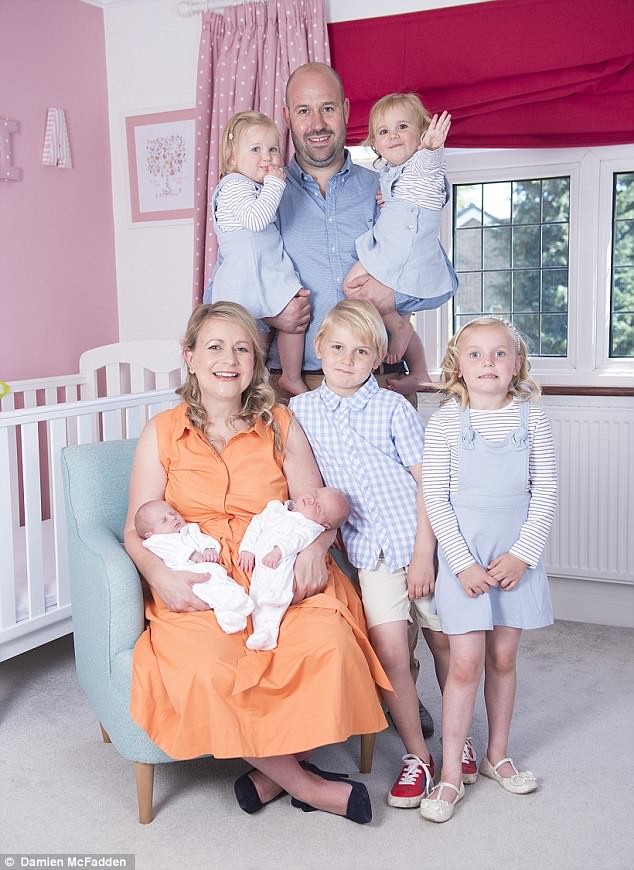 ‘I had a little chat with all of Alfie’s mates, to try and get them to think of having five sisters as a positive thing. It’s a bit of a hard sell at seven, but I think they got it. Alfie’s going to be very in touch with what women need, at least.

‘But I’m determined to be there for them all as much as possible, despite the demands of the business. I do want to be the one who puts them all to bed in the evening, and makes them breakfast in the morning. I want to do school runs.’ Meanwhile she is recalling all the baby-gear she gave away after the older twins outgrew it.

‘Poppy and Amelia weren’t expected, so I’m asking for the car seats and the swinging crib stuff back! All our smug friends who stopped at two are finding things in their loft for us.

‘What we still don’t have is a buggy for four, if such a thing even exists. At the moment we need to move furniture in the hall to get this traffic jam of double stroller and double pram in there.’

It is, she acknowledges cheerfully, ‘utter bedlam’ most of the time. ‘You just have to laugh at the chaos. The one thing we’re holding onto is that we’ve done this newborn thing with twins once already. We know that we can do it again, and get them into a sleep routine that works. But I don’t want to wish the time away either. It might be hard work, but this very-new-baby bit doesn’t last long.

‘Some friends popped in the other day and they said, you’re like superwoman, you’ve got so much on your plate, and I do get a lot of that from people. But most of the time I don’t feel it. I do feel very lucky, to get my dream business and this crazy number of kids at the same time.’

Before she leaves, I’m curious to know what she and Matt did with their three hours of free time when all six were asleep. Surely the evening stretched ahead, full of golden opportunity?

‘Erm, what did we do? We ate a pizza,’ she says. ‘We slumped on the sofa for a while? I’m pretty sure I stayed awake. Most of the time I’m finding that very hard.’