Obese mother who was forced to wear maternity clothes MONTHS after her pregnancy when she ballooned to 22st, has lost EIGHT STONE in less than a year- without hitting the gym

A mother who had to wear maternity clothes for months after her pregnancy after she ballooned to 22st has dropped eight stone in as many months without going near a gym.

Joanne Thomas, 35, has shed a total of 8st 2lbs after struggling to lift her bulky frame off the floor at a parent and toddler group left her so humiliated she knew ‘enough was enough’.

The mother-of-two, from Thatcham, Berkshire, who weighed 21st 12lbs and was a size 22 at her biggest, started to pile on the pounds during her second pregnancy with son Noah Grant, 10 months.

Joanne told herself she didn’t need to worry about her weight while pregnant, binging on microwave meals, takeaways and six pieces of toast slathered with Marmite. 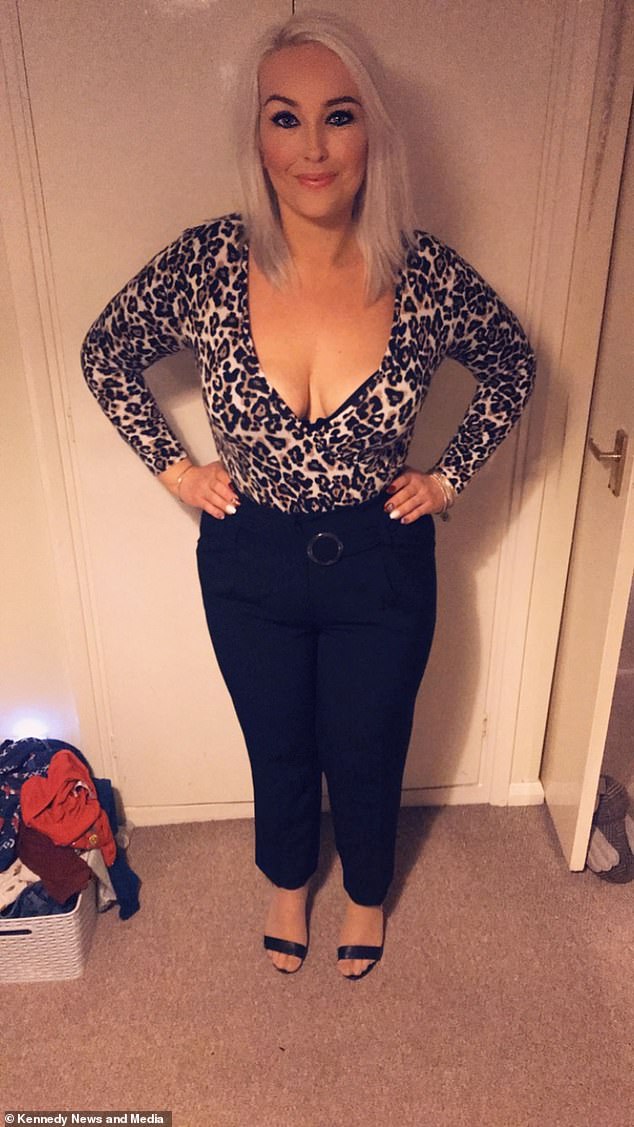 Joanne Thomas, 35, from Thatcham, Berkshire revealed how she was able to lose eight stone in as many months without hitting the gym 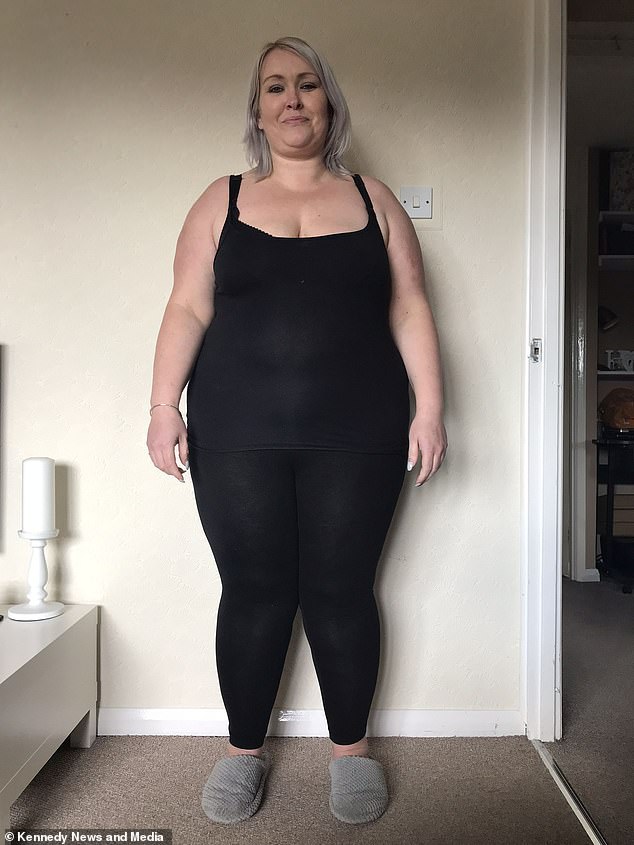 Determined to turn her life around for her family, Joanne joined Slimming World in April last year and has since dropped four dress sizes.

Now weighing 13st 1lb, Joanne feels ‘a million dollars’ and said her partner Stephen Grant’s jaw ‘hit the floor’ at his 40th birthday party when she strutted in wearing a fitted jumpsuit.

Joanne said: ‘It’s like I’m a new woman, I feel like a million dollars. I’m much more confident and better in myself. 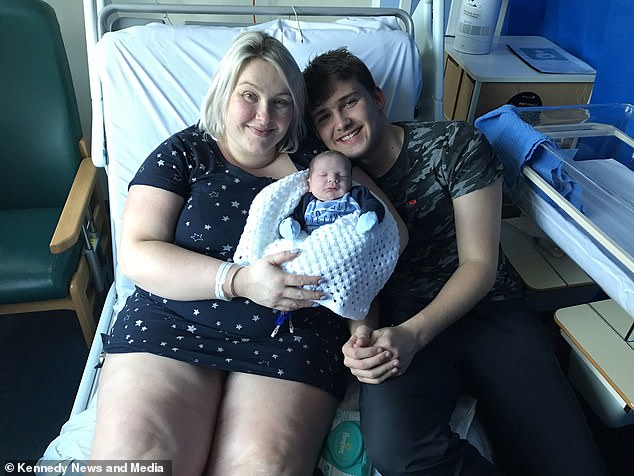 Joanne (pictured with her son William, 16, after giving birth to Noah) who worked 12-hour shifts as a care assistant would eat out of ‘boredom’ during her pregnancy 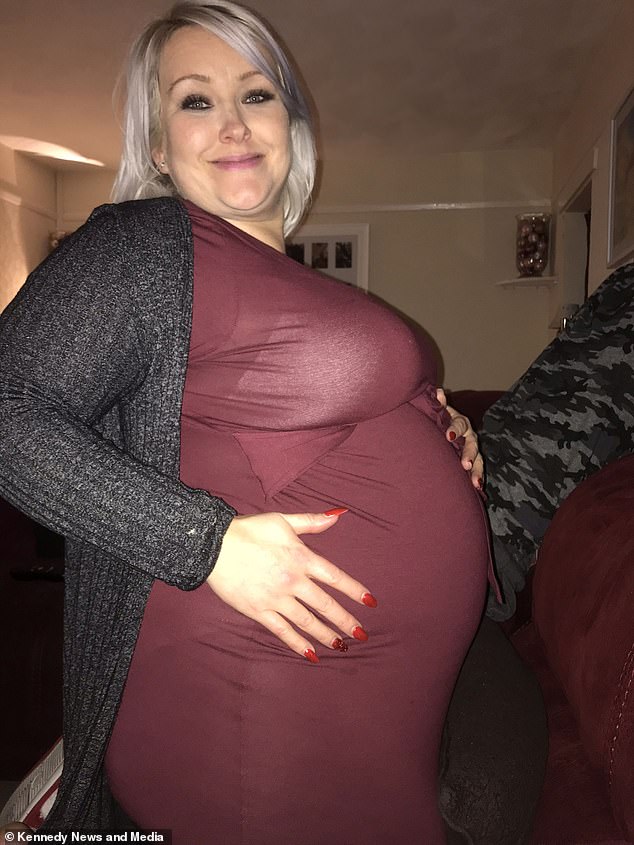 Joanne (pictured while pregnant with Noah) chose not to worry about her weight during pregnancy and survived on a diet of microwave meals, takeaways and six pieces of toast slathered with Marmite 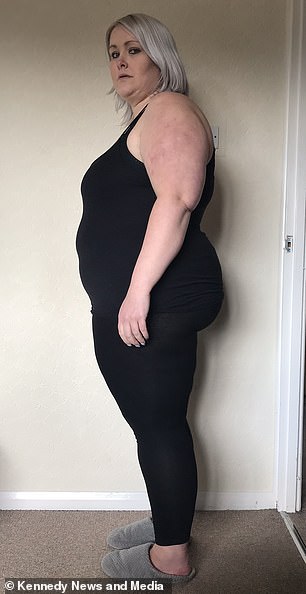 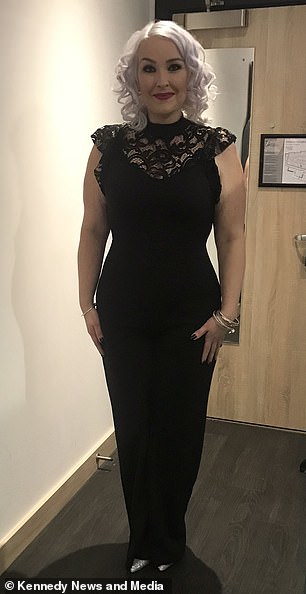 ‘People say ‘what’s your trick?’ but there isn’t a magic wand – it’s about how much you want it.

‘You have to have amazing willpower. Stephen’s 40th was a massive aim for me. I didn’t want him to think ‘oh, I have a fat girlfriend that used to be thinner’.

‘But it wasn’t really for him, it was the milestone I set for myself.

‘He kept telling me I was doing great and was very reassuring and supportive. He’s amazed at how I’ve stuck to it and been so focused.

‘We went out for his 40th and I was wearing a jumpsuit. I came down to the hotel bar and his jaw nearly fit the floor. 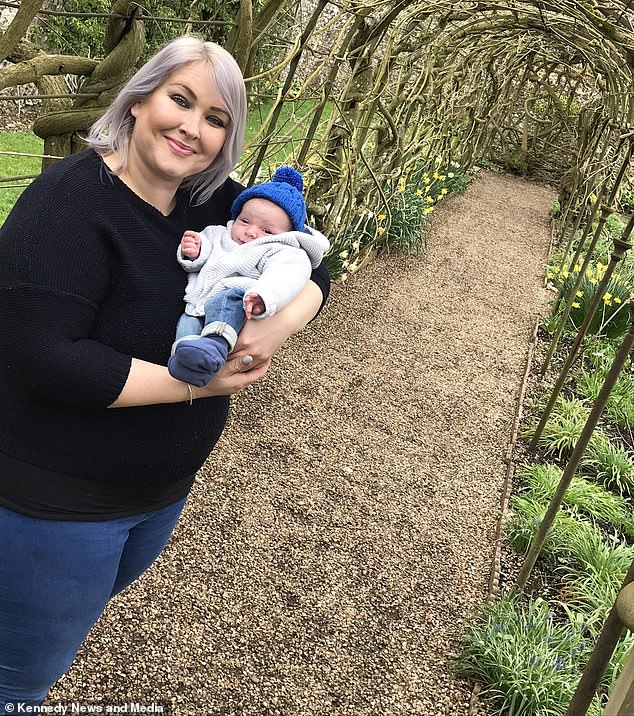 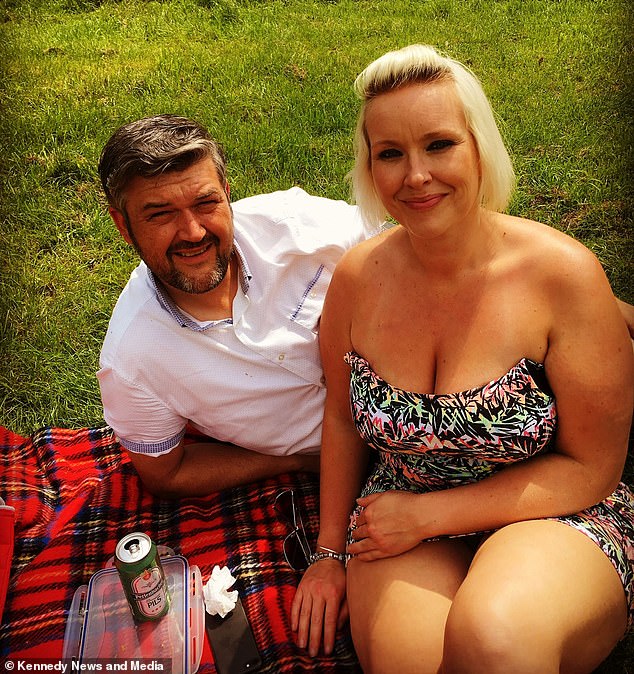 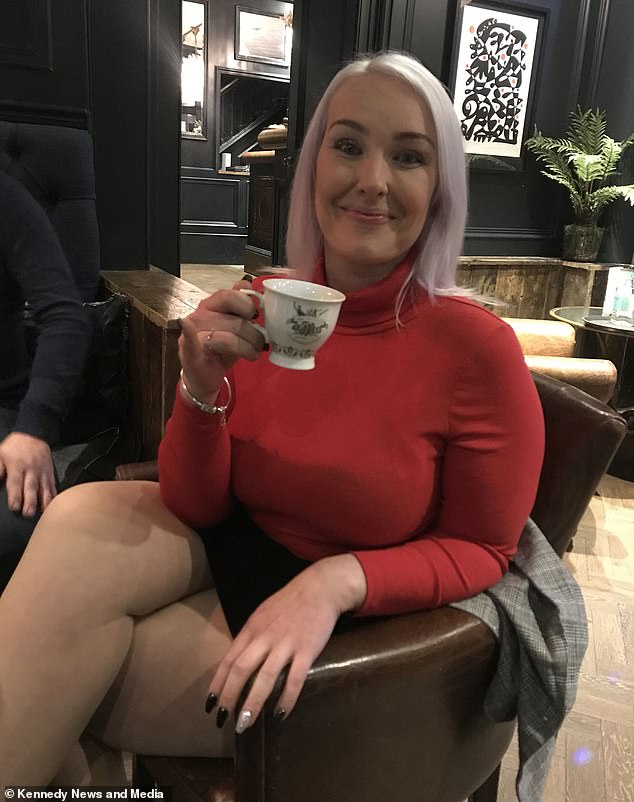 ‘He said he was a lucky man and I looked stunning and he was really proud of me.

‘As of this week I can go into any shop now get a size 14 off the shelf and it fits perfectly. It’s a huge difference.’

The mother admitted she used to gorge on takeaways and convenience foods during her 12-hour shifts as a care assistant since starting their relationship in 2016.

After having son Noah Grant in March 2018 Joanne said she soon felt ’embarrassed and inadequate’ when she struggled getting up from the floor at parent and child groups.

It wasn’t until after she’d had Noah that the toll of her ‘eating for two’ mentality was revealed as she spiralled to 21st 12lbs and spent months squeezing into maternity wear. 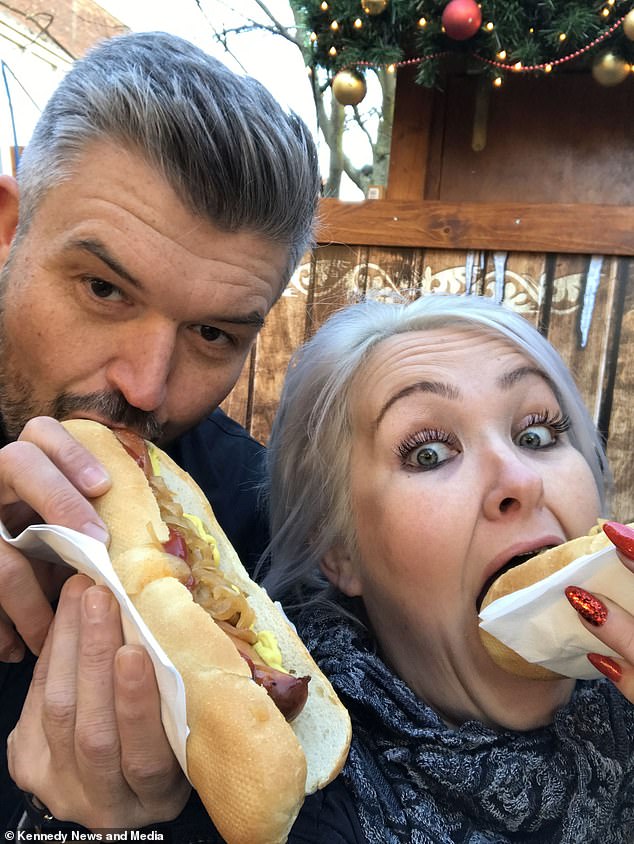 Joanne (pictured with Stephen) was able to achieve her 8st 2lbs weight loss without exercise, she credits the results to eating healthy and taking a daily short walk to the corner shop 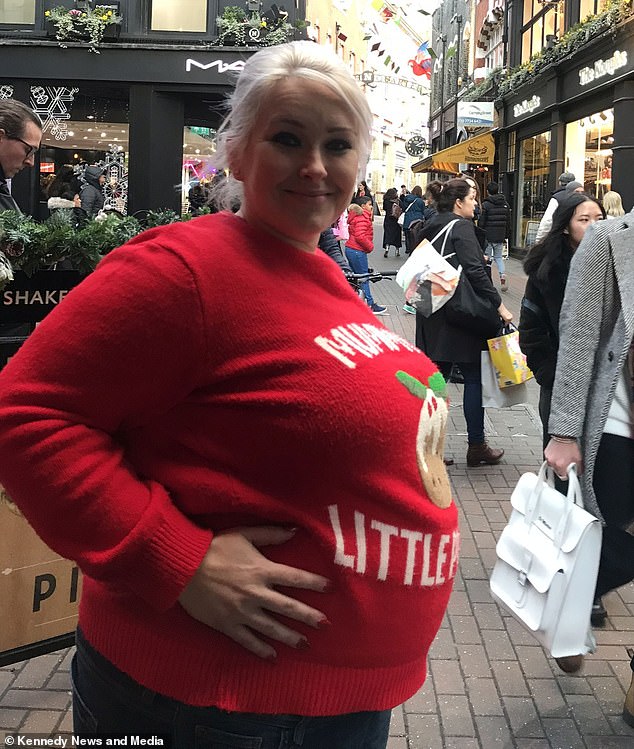 Joanne claims one of the key turning points in her weight loss journey was when she had to ask other mums to hold Noah while she struggled to get onto the floor or stand up again because of her size.

A difficult pregnancy meant she was housebound towards the end and found herself eating out of boredom.

Joanne said: ‘When Noah was around three months old I took him to a music class.

‘We’d have to sit on the floor and someone would have to hold him while I struggled to get up, I felt embarrassed and inadequate.

‘I wanted to be able to get around like the other mums could and felt I needed to be thinner to give Noah the best childhood he could.

‘Now I just tuck him under my arms and get up off the floor easily.

‘Before Noah we’d eat rubbish at home. I’d be working 12 hours shifts at the hospital and eating lots of takeaway, but I was only around a stone and a half heavier than I am now.

‘During pregnancy I thought ‘oh, I don’t have to worry about this for nine months’, so I’d eat six slices of toast with marmite for breakfast and the biggest cinnamon bun that you’ve ever seen.’ 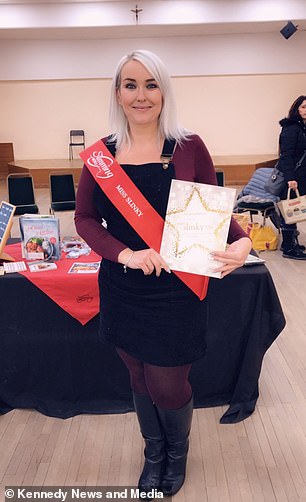 After having Noah, Joanne’s weight spiralled to 22 stone as she’d suffered with pelvic pain and overeaten for months.

Two months passed and trendy Joanne was still wearing her maternity clothes or struggling to fit into her size 22 leggings.

Increasingly wary of her lack of energy and inability to play with her baby, Joanne returned to an old Slimming World class hoping to take back control.

Joanne said: ‘I wasn’t always huge but I did pile on masses in that pregnancy.

‘I remember going to my first midwife appointment and being mortified that I was already 16 st 2lbs.

‘I had a horrendous pregnancy with swelling and a bad pelvis, and I was really inactive for the last trimester.

‘I was very immobile as well – obviously I’d gone from working 12-hour shifts three or four times a week, to basically being housebound.

‘When I’d had the baby and brought him home, I couldn’t do anything.. I was so fat and uncomfortable, I couldn’t even get on the floor to play with him.

‘When he was five weeks old I went back to Slimming World and I decided I wanted to lose weight more than anything.’

Despite previously trying Slimming World back in 2010, her weight gain and embarrassment at being unable to move freely at the parent and baby group spurred her on to try the Thatcham group again.

Joanne said: ‘I stuck to the plan religiously and now when I think to myself ‘I want a cake’ I think ‘I want the weight loss more’.

‘I wanted to be healthy and thinner and to be able to run around with my boys.

‘I didn’t want to be fat forever – I want to see my kids grow up.

‘Noah’s crawling now and I’m running round like a lunatic half the time trying to move everything from his reach. 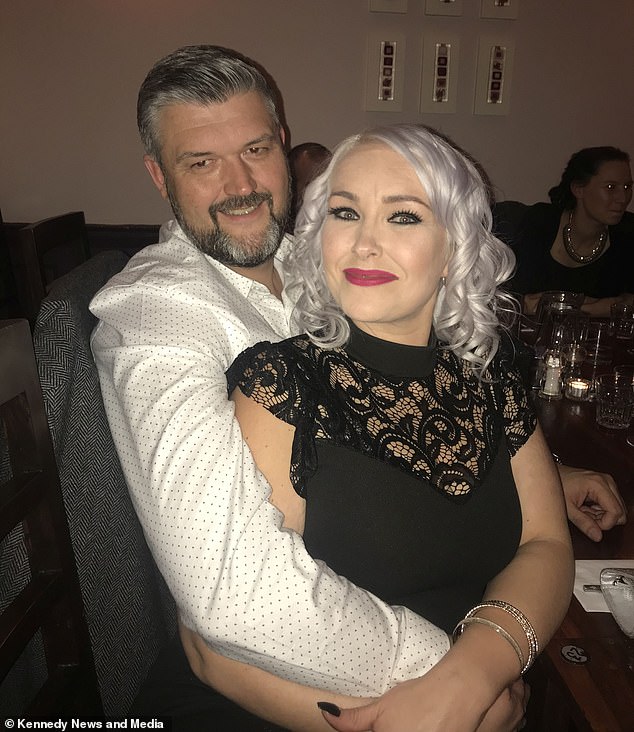 ‘I want to play on the park and get my fat bum down the slide – all the things I could never do.’

After getting back into Slimming World, Joanne began to cook family dinners from scratch and has enjoyed watching the pounds slip off.

She even enjoys ‘fakeaways’ to replace her old favourite – fried chicken and chips.

But the bubbly mum says she hasn’t once stepped into a gym, crediting her slender shape to healthy eating and a short walk to the corner shop once a day.

Joanne said: ‘When I was pregnant I had horrendous heartburn so I lived on McDonald’s milkshakes.

‘Now if I fancy something like that or KFC, I’d never go and buy one. I’d just find a way of making a healthy one myself.

‘I do all my cooking from fresh. Before, I couldn’t stand to do that so we grabbed what we could get – takeaways and unhealthy foods.

‘Now for breakfast I might have poached eggs with mushrooms or tomatoes, or I’ll have a wholemeal bagel, bacon with no fat and cheese.

‘For lunch I’ll have a jacket potato because I’m always out meeting other mums, or soups, omelettes. I don’t avoid carbs either.

‘At night we’ll have anything from a chilli, spaghetti bolognese, chicken kebabs, roast dinners – proper food.

‘I think the thing with Slimming World is that it isn’t a fad diet. It teaches you to live the rest of your life eating healthy, balanced meals.

‘It’s family food as well, we all sit down and enjoy an evening meal together now.

‘I don’t do any exercise or classes, we might walk to the shop once a day to get some milk but I don’t do anything else.

‘No gym classes, no aerobics – I’m definitely not a runner.’

BREAKFAST – Four pieces of toast with Marmite and butter (556 calories)