Black woman says she’s been accused of KIDNAPPING her own son, seven, because of his flame-red hair – and even he’s asked if she’s his ‘real mother’

A black mother-of-three has revealed how people struggle to believe that her red-haired son is biologically hers – and once even faced police questioning after a stranger accused her of kidnapping him.

Ebony Lumpkin, 30, from Virginia Beach, Virginia, is constantly being peppered with inquisitive questions by strangers about her relationship to Matthew, seven.

Although the family ‘mostly get compliments’, they also face a barrage of queries about whether the schoolboy has different genetic heritage to his mother and father. The family have trawled back through their family trees but say they can find no evidence of a previous red-head.

So constant have the questions begun that Ebony, a Navy veteran, has recently dyed her hair red in a bid to make Matthew feel more comfortable after he was taunted by  his peers. 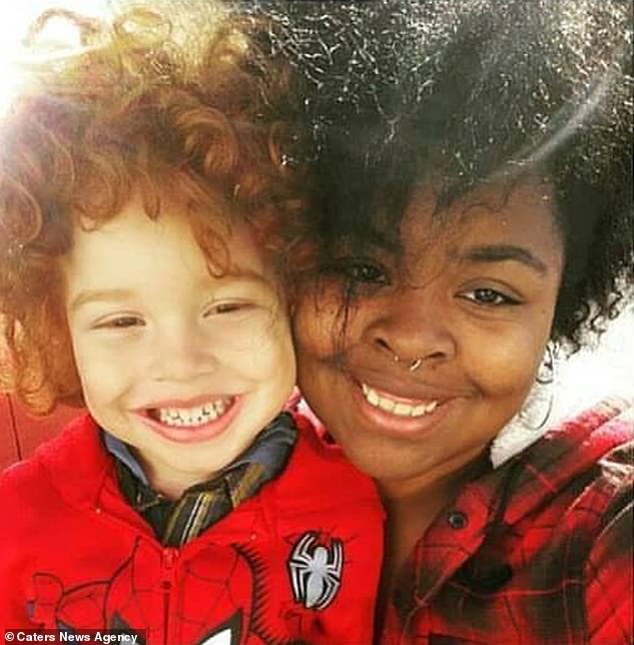 Ebony Lumpkin, 30, from Virginia, pictured with her son Matthew, seven. His flame-colored hair means people constantly ask Ebony whether she’s adopted him, or make the assumption that she’s his nanny 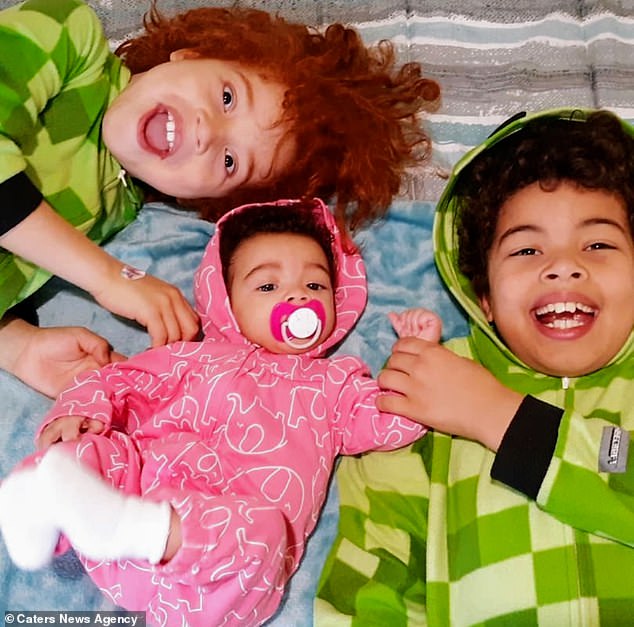 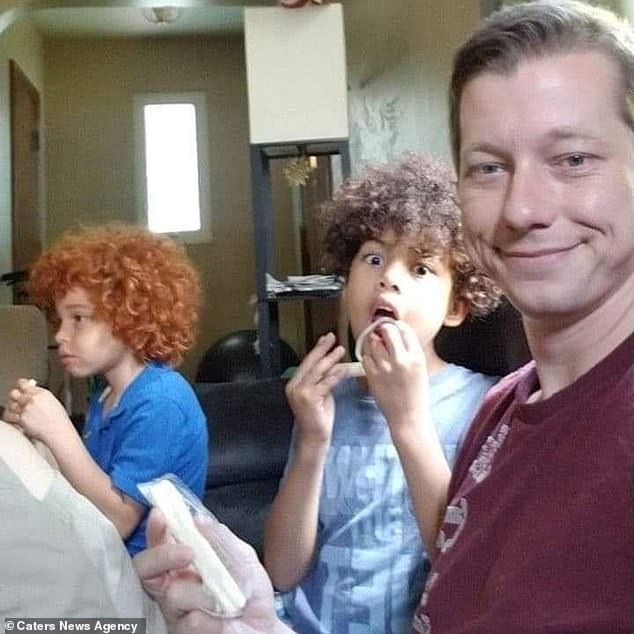 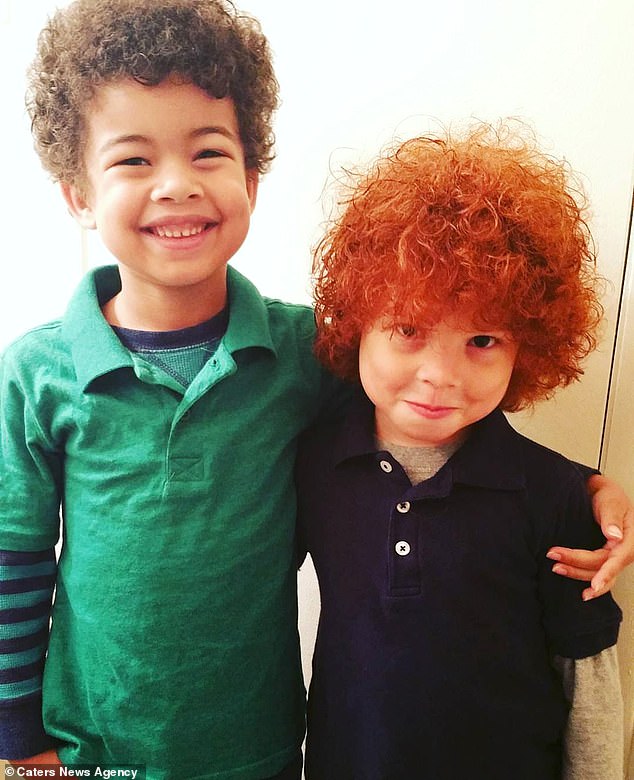 The mother-of-three says she ‘understands’ that it’s rare ‘to see a black mother with a white child’, saying ‘I was shocked when I first saw him too!’ 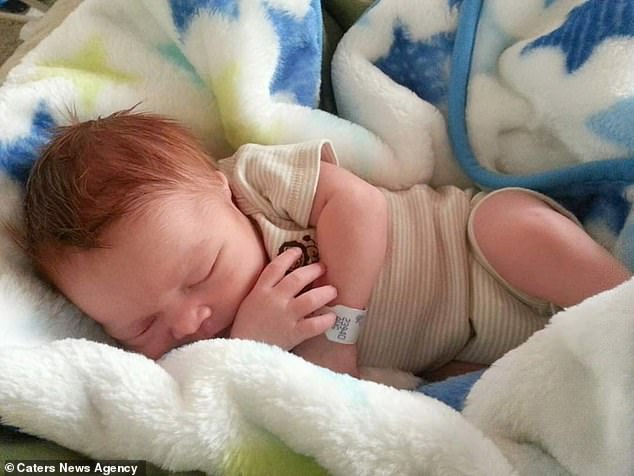 Here I am! Despite neither Matthew’s mother and father having red hair, doctors think they both carry the MC1R gene, which influences hair color

Research shows that both Ebony and Matthew’s father, Patrick Tebbe, 32, must carry the MC1R gene which is linked most strongly to red hair.

Ebony said of her constant conversations: ‘A five-minute trip with Matthew always turned into an hour one as people are in awe with him.

‘They are always complimenting his hair but then look twice at me and make speculations. I can’t count how many times I have had to explain I’m his mother, not nanny nor is he adopted.

She added: ‘I understand it is rare to see a black mother with a white child who has red hair – I was shocked when I first saw him too!

‘But I would prefer it if they were mindful about how they ask – especially in front of Matthew.

‘It is disheartening to hear and makes him question his role in the family. Children are volatile and care about what others think – it is very confusing for him when strangers question if I am his mother.

‘He once spent a whole week asking every red-haired woman if they were his ‘real mummy’ after schoolkids told him I am not.

‘Another time a woman rang the police as she assumed, I had kidnapped Matthew from a white lady who had helped me put on his shoe in the supermarket. 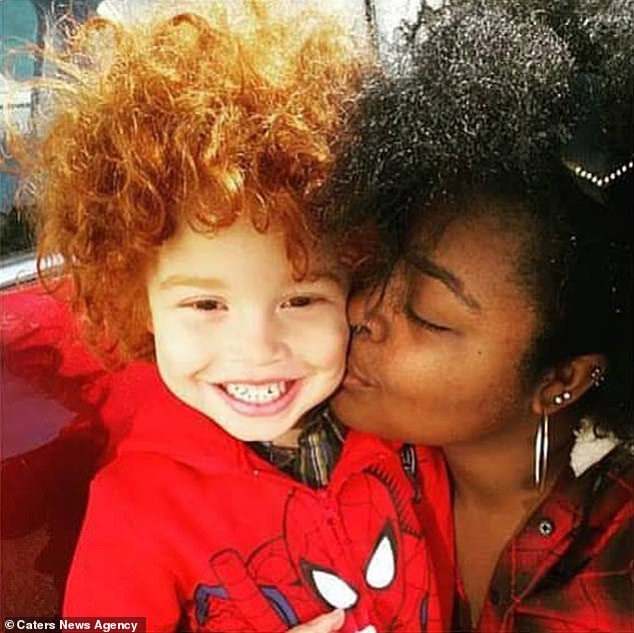 Confusion: The 30-year-old says she son gets perplexed when people want to chat about his hair – and describes how one woman called the police, assuming he’d been kidnapped after spotting mother-and-son in the supermarket together 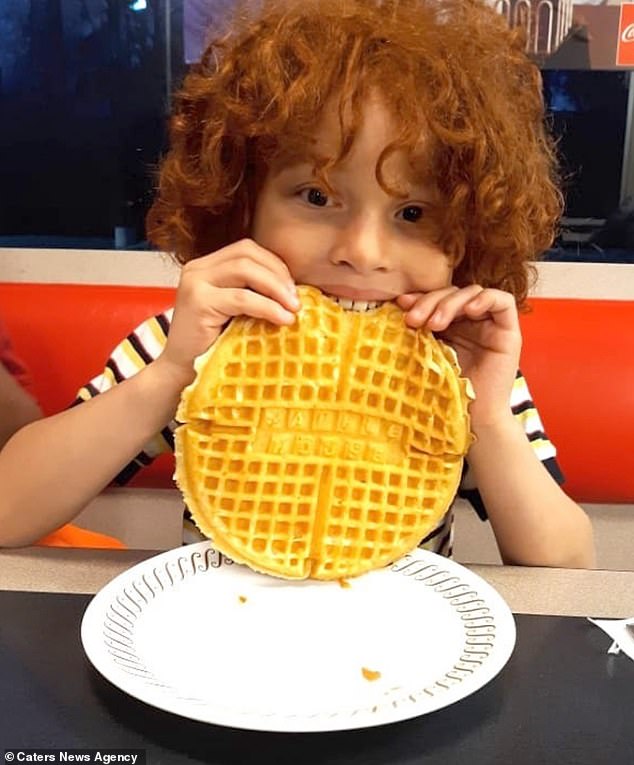 Upside: Matthew’s unique hair color has seen him scouted by a model agency 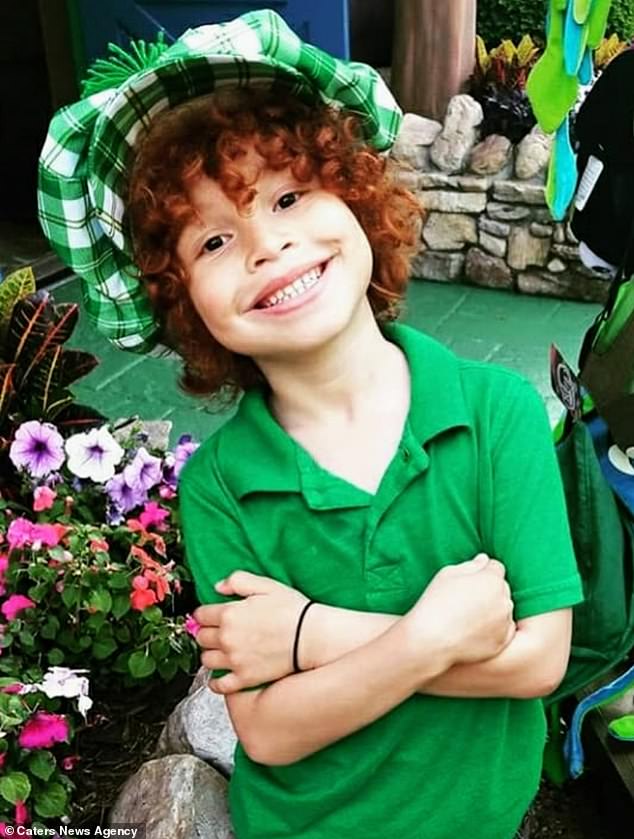 Despite not finding red-haired genes in their respective family trees, Ebony and Patrick much have a hidden, recessive red-headed gene to explain Matthew’s red hair 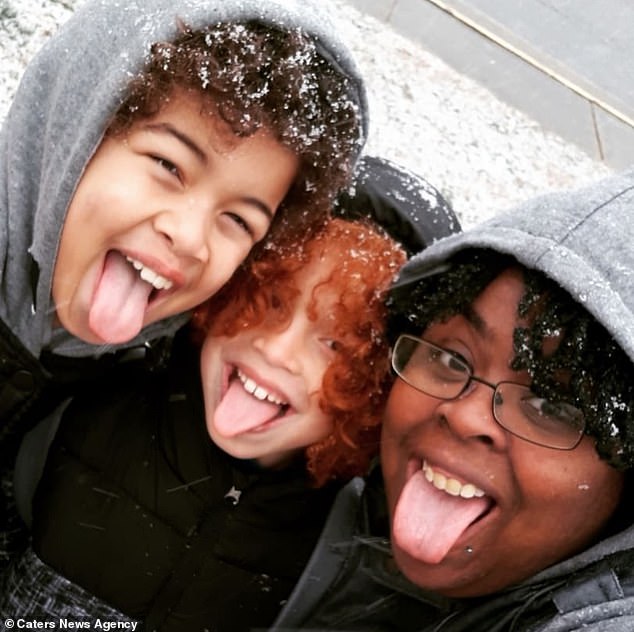 Adam, Matthew’s older sibling, can feel left out from all the attention that his brother gets, says Ebony – saying the decision to dye their hair a red hue has helped them all to bond

Ebony revealed the family had been to the doctors that day and had Matthew’s birth certificate – but added that even the police officer didn’t believe her at first.

She explained: ‘It was the most terrifying thing I have ever experienced.’

However, it isn’t always negative remarks, Matthew has racked up over 3000 followers – who love his hair – on Instagram.

She added: ‘We have learnt to embrace the prolonged trips to the store as the positive comments outweigh the negative.

THE GENETICS: HOW  DO TWO DARK-HAIRED PARENTS CONCEIVE A BABY WITH RED HAIR

The gene for a particular feature comes in several alternative versions called ‘alleles’. Some are dominant and some recessive.

Dominant genes are likely to control the outcome of your inherited trait, while recessive genes may skip a generation or two before their impact is made known.

For example, if you inherit an allele for dark hair from either or both parents then it is likely your hair colour will be dark. However, it is possible to have two parents with black hair who conceive a red-headed child. 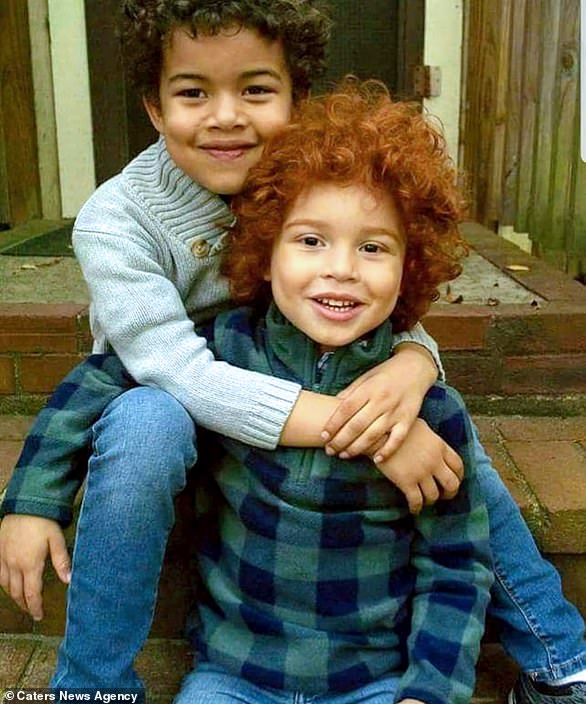 The recessive gene in Patrick and Ebony’s genetic history has passed down to younger son Matthew, but not their two other children

This is because both the mother and father carried a hidden, recessive red-headed gene which they inherited from their own parents or grandparents. You hand on only one of your two, at random, to the next generation.

As red is recessive it will skip a generation if a dominant dark gene is present and can appear unexpectedly in the next – if both parents hand over their recessive red gene, not the dark one, to that particular child.

Likewise, if both parents carry the same recessive gene, say for blond hair, they can have a blondhaired child even if they are both dark.

‘Matthew loves the attention and has even been scouted by a modelling agency. Adam often feels left out which is why he suggested we dye our hair red to match Matthew’s.

‘It touched my heart to hear he wanted to be like his little brother, and it shows they both appreciate his unique look. 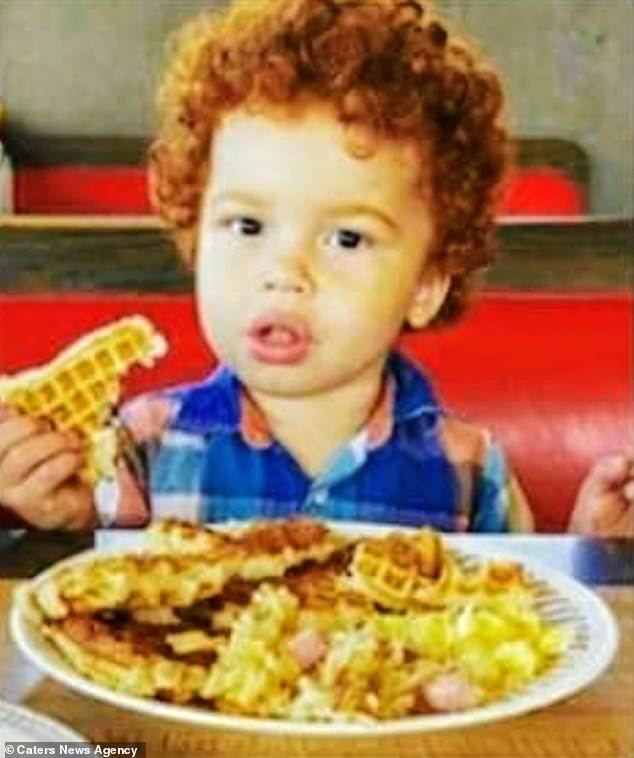 ‘When Matthew saw the grand reveal, he was thrilled, and it was one of the greatest joys of my life.’

After looking through five generations of her family and Matthew’s dad, Patrick Tebbe’s, 32, but there’s no sign of red hair which prompted Ebony to research her heritage further.

She adds: ‘Many people say ‘he must get the hair from his dad’s side’ but none of his family have red hair.

‘The research I found said both parents must carry the MC1R gene for this to happen to one of their kids.

‘I would like other people to be knowledgeable and learn about genetics before making rude remarks.’