Single mother took on a second job and used credit cards to pay for her daughter’s £1,500 dream prom – including TWO dresses and more than £500 of beauty treatments

A single mother-of-three has revealed how she splashed out £1,500 for her daughter’s prom night to ensure she could keep up with her peers.

Bryony Noble, 36, from Southampton, Hampshire, had to take on a second job and use credit cards in order to pay for her daughter Bethany’s, 16, dress, beauty treatments and accessories.

She made the drastic move after the though of not being able to afford Bethany’s prom began to keep her awake at night.

She continued: ‘Every time I dropped the kids at school or logged into social media all talk was the same: dresses, shoes, accessories, tanning, eyelashes, expensive sports cars to turn up in style.

‘I began to lay awake at night. I’m a single mum and I already worked in a social club in the evenings. There was no way I’d be able to afford a dress that cost hundreds and sports cars and accessories.’ 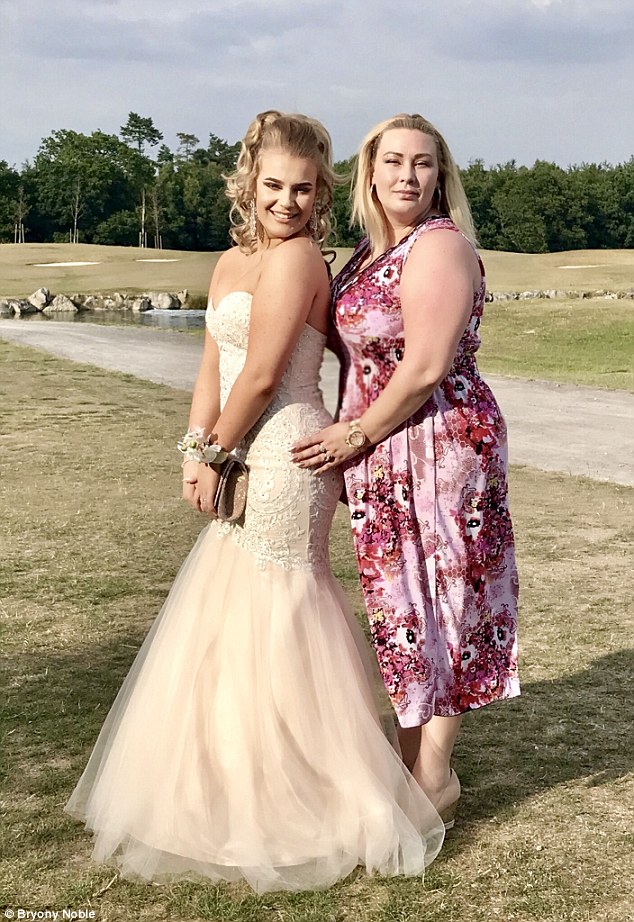 Bryony Noble, took a second jobs and several credit cards in order to giver her daughter Bethany the dream prom, costing no less than £1,450. Pictured: Bryony and her daughter on the day of the prom

Bryony, who is also mother to Natasha, 13, and Kaiden, 8, said that the subject of the end of year prom came up when Bethany was just 14.

She explained: ‘I had Bethany, her younger sister Natasha and Kaiden. If splashing money on a prom wasn’t her thing then I considered myself a lucky mum.’

However, as the years past and Bethany moved into Year 11, she began to express an interest in prom dresses costing upwards of £800. 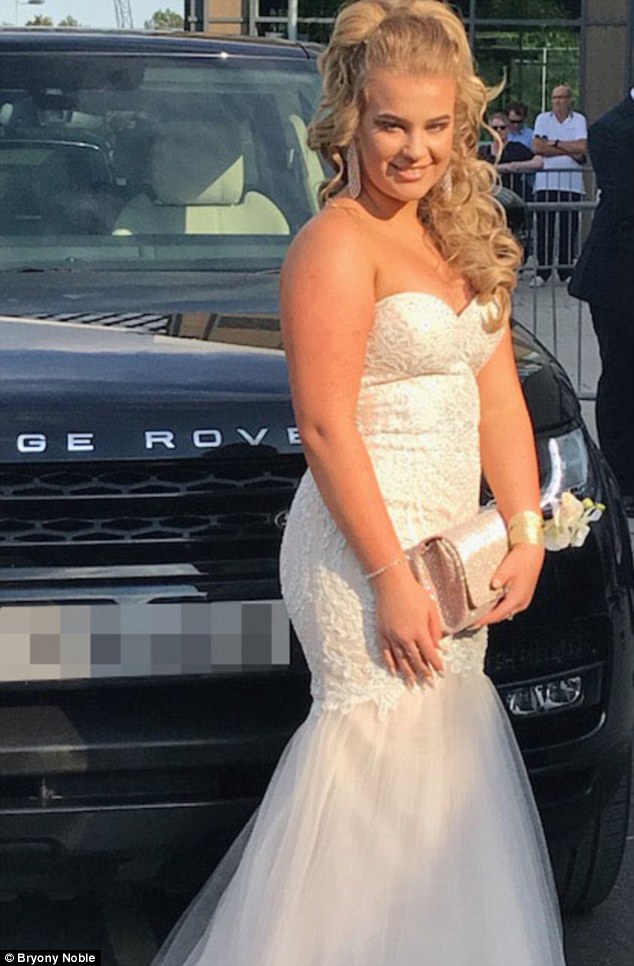 Bryony continued: ‘It was the start of a monster.

‘When she started year 11, I’d hear snippets of conversation in the school playground from other mums. “We’ve got her dress already….cost over £700” “We’ve already started looking at transport…mine wants a Lambourghini.”‘

‘Leaving school in the nineties, I’d never had a prom. When I left school we had a simple school disco.

‘There was no dress shopping, hair extensions, fake tans and car hire. It was simple. Simple and cheap.’ 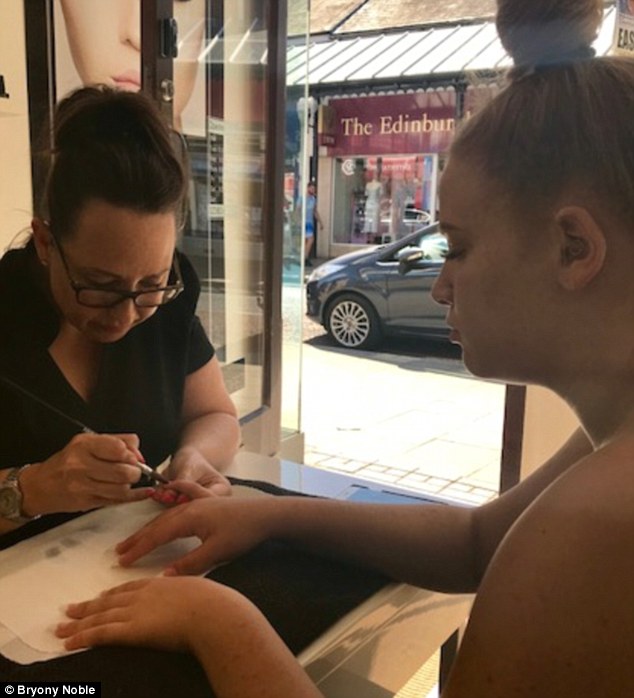 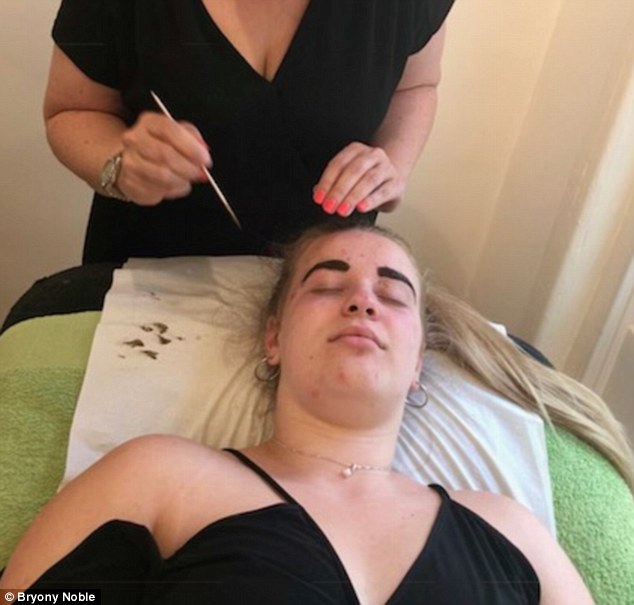 THE TOTAL COST OF BETHANY’S PROM

With the stress of money mounting Bryony made the decision to take on extra work to save up for the event.

She said: ‘Bethany continued to talk about the prom. I decided to take a second job in the daytime doing admin to help pay for it all.

‘Then in October last year, at the start of her final school year, Bethany sat me down looking serious and told me it was time to find the dress.

‘She explained – many girls had already got their prom dress. And there was even more pressure – the dress shops had a ‘one style per school’ rule meaning no girl would turn up in the same dress.

‘Before I knew it, Bethany had set up appointments at bridal shops and eveningwear boutiques.

‘At the first shop we were told she was the first appointment of the day – but when we arrived there were four other families there with girls eager to find The Dress.

‘Bethany had her heart set on a midnight blue number that cost £800 but the sales assistant explained that it was already taken.’

In the hope to find a cheaper alternative Bethany tried on a further eight dresses but ‘none of them were right.’ 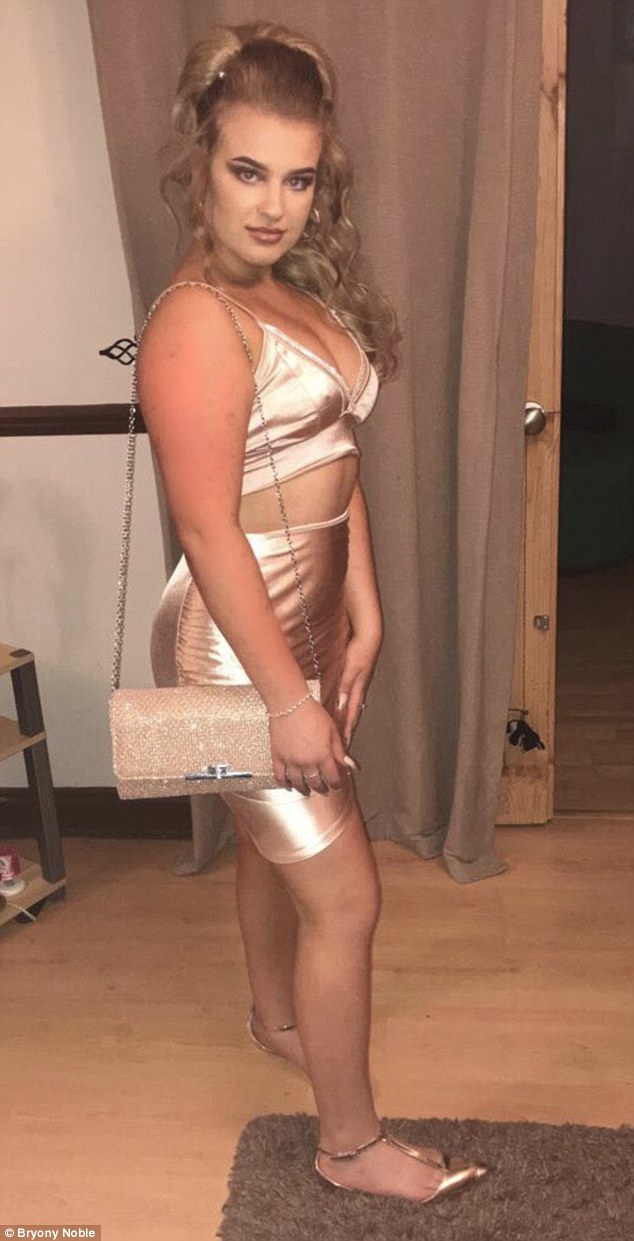 Bryony continued: ‘We went to another shop. Here she tried on six dresses. Thankfully one was her favourite.

‘It was a beige and cream fitted dress with beautiful embellishments. And it had been knocked down from £800 to £350.

‘It was a lot of money, more than I’d spent on my own wedding dress. But she looked so beautiful and happy.’

Bryony agreed to take the dress but her younger daughter Natasha had also fallen in love with a frock, asking whether she could get it in advance.

At £275 it was a ‘bargain’ and Bryony reluctantly agreed.

In the coming weeks Bethany began to list other things she ‘needed’ for the prom including hair extentions, nails, teeth whitening, a mode of transport, shoes, handbag and accessories. 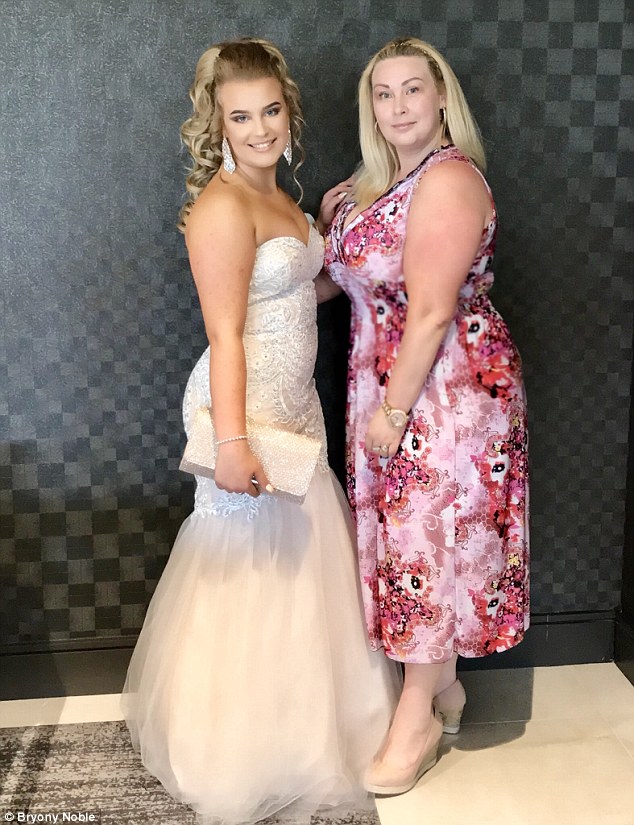 Bryony added: ‘I looked at my bank balance and didn’t know whether to laugh or cry.

‘I offered to drive Bethany but she rolled her eyes, explaining that people hire sports cars – Maseratis and Porsches.’

Over the coming weeks, there was even more pressure from the school. There would be awards for Best Entrance, Best Dressed, Prom King and Queen, the list went on. 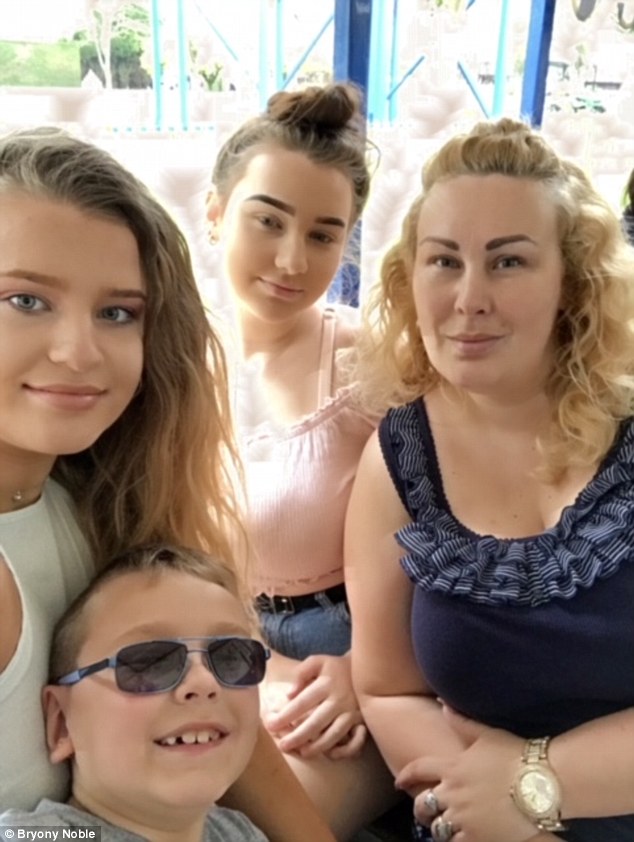 ‘It was a whirlwind – and all during exam time. Thankfully Bethany is a bright girl who was getting all As in her subjects.

‘But I dreaded to think how this might turn the heads of other kids and interfere with their school work and final exams.

‘I needn’t have worried. Bethany sailed through her exams and once her final one was over, it was officially Operation Prom.’

Bryony was relieved when a friend offered to let Bethany use their black Range Rover for transport for free.

But the mother was was hit with another, unexpected expense – the ‘Afterprom Dress’ an outfit to change into for parties.

She continued: ‘On the week of the prom we went shopping and found the after prom dress – a champagne coloured two piece with a bra-let top and satin skirt.

‘Then we started operation skincare – we went to a Mac make up counter in the shopping centre and bought a load of skincare products and foundation.

‘Next Bethany had her eyebrows waxed, tinted and shaped and we bought her hair accessories.’

Bryony continued: ‘The following week we started her skincare routine.

‘We went to a salon where her skin was exfoliated, then she had eyelash extensions put in, a spray tan and a full set of nails.’

The mother and daughter then returned home where Bryony practiced half up, half down dos. And then the big day came.

Bryony said: ‘Finally the big day arrived and we packed a suitcase for her after prom party where she’d stay with friends.

‘I only had to look at her thrilled face and any worries I’d had about money and funding this were beginning to ebb away.’

She continued: ‘Later that evening, she slipped into her prom dress. I took some photos, then the Range Rover arrived. Bethany got in and they went off to her boyfriend’s house.

‘I followed in my car and then we went on to the venue – the Hilton Hotel in Southampton.

‘I stood with other parents as a procession of cars pulled up. Some arrived in Porsches, others in Limos, one even arrived on a horse. As Bethany pulled up, I got into position to take a photo.

‘Tears filled my eyes and I couldn’t even raise a hand to wave at her.

‘This had cost me £1,500 in total. I’d worked two jobs, had to take credit and scrimped and saved to get her the best I could.

‘But now as I looked at the beautiful young woman in front of me, I realised: it was worth it. Every penny.’