No iPads here! Mother melts hearts as she reveals ‘treasures’ from her four-year-old son’s coat pockets – including twigs, pennies and a plastic snake

Children are often accused of being too preoccupied by smartphones and video games, but one mother’s tweet has proved nature still has the power to captivate little ones.

Katie Munnik, a writer from Cardiff, emptied the pockets of her four-year-old son’s coat before putting it in the washing machine, and couldn’t resist snapping a picture of the contents to share online.

Her little boy’s collection included an assortment of twigs and sticks, dried leaves, pebbles and pieces of bark.

He’d also tucked away a handful of pennies and a plastic snake.

‘Found in the pockets of a 4 yr-old’s winter coat before washing,’ Katie tweeted with the photograph, which has been shared and liked thousands of times.

It also inspired some fellow parents to share snaps of their own children’s secret ‘treasures’ – from shells to gummy sweets. 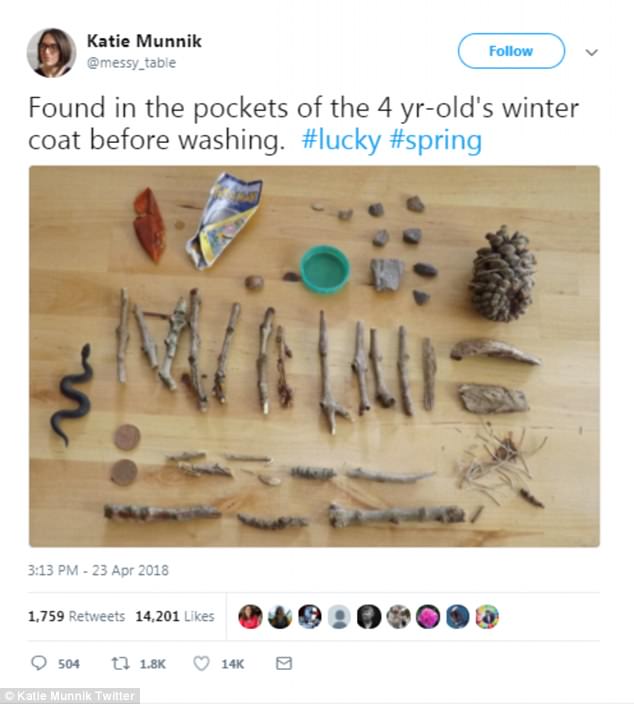 Katie Munnik, from Cardiff, shared a picture of the contents of her four-year-old son’s pockets, which quickly went viral among nostalgic followers as they included a variety of nature-related keepsakes

And the mother was quickly inundated with replies from touched followers, praising the little boy’s enthusiasm for the great outdoors.

‘Innocence at its finest’, one follower tweeted, while another added of the keepsakes: ‘Learned it as a child… about 50 years ago. Always think of it when I see “grubby” little boys.’

Another agreed, writing: Good to see the proof of a child getting out into the wide world and not plonked in front of TV. The world is there to find and discover Great parenting.’

Some suggested she save the contents as a keepsake for when her son grow older. 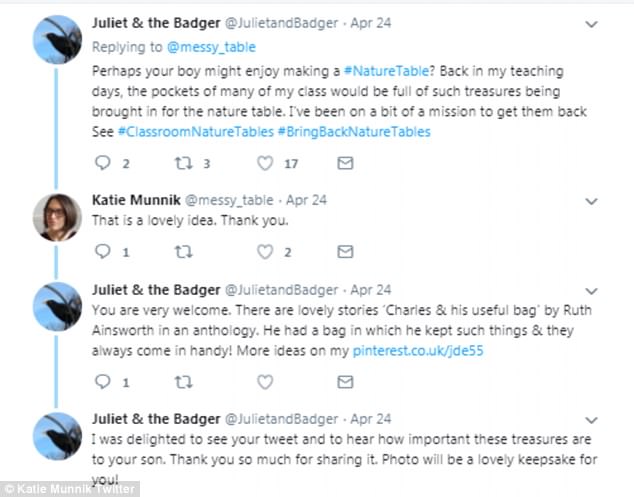 The adventurous little boy had a collection of nature-related items, striking a chord with many nostalgic Twitter users worried the latest generation had lost touch with nature

One nature lover added: ‘Perhaps your boy might enjoy making a nature table? Back in my teaching days, the pockets of many of my class would be full of such treasures being brought in for the nature table. I’ve been on a bit of a mission to get them back’.

Explaining her son’s contents further, Katie added: ‘Making spring perhaps, or preserving winter. The twigs are palm-length- he said they are good to hold.

And replying to a follower who joked that her son was like a magpie, she added: ‘Well he’s magpied it again. Yesterday he noticed buds on three of the sticks so got a glass of water to help them bloom. He’s calling it a test’. 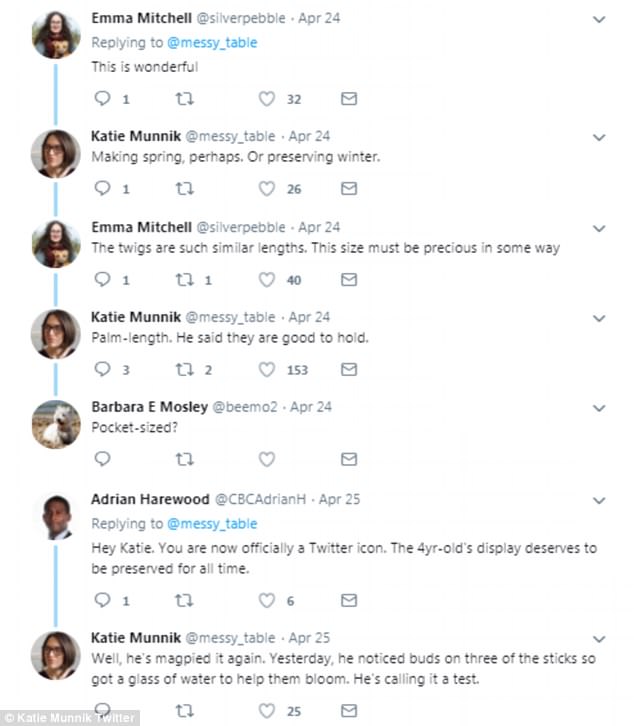 And the mother was quickly inundated with replies from touched followers, praising the little boy’s enthusiasm for the great outdoors

Others added snaps of their own children’s keepsakes to the thread, with one sharing a snap of her 4-year-old’s fir cones, pebbles, and a preserved ladybird.

Speaking about the reaction her tweet has received, Katie told Femail: ‘I am stunned by the international response to this simple picture. I never imagined it would reach so many people and their responses have been really moving.

‘Maybe, with plastic so much on our minds these days, this little collection of sticks reminds us that simple natural things can spark big imaginations.

‘And, as my son tells me, small things feel good to hold’. 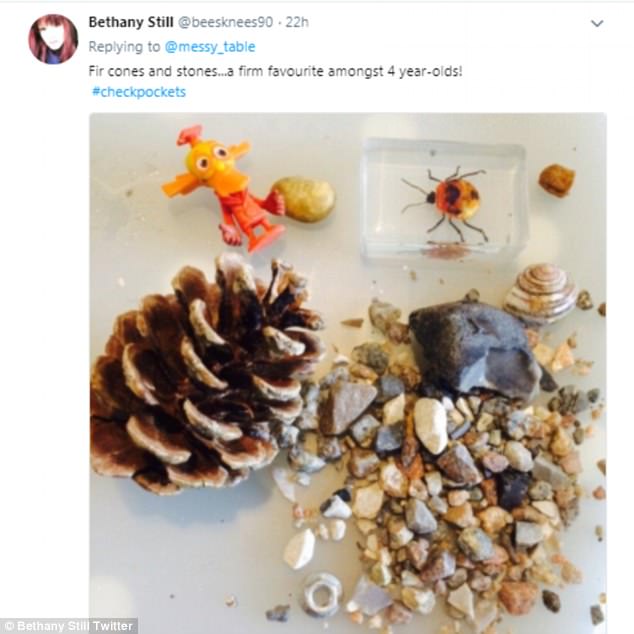 Others added snaps of their own children’s keepsakes to the thread, with one sharing a snap of her 4-year-old’s fir cones, pebbles, and a preserved ladybird 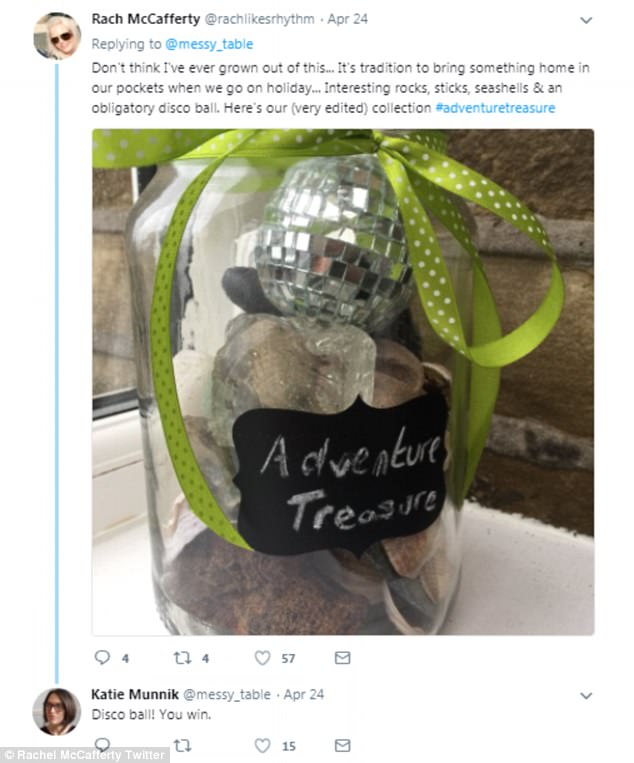 Another showed off her keepsake pack of shells and a disco ball, winning Katie’s vote 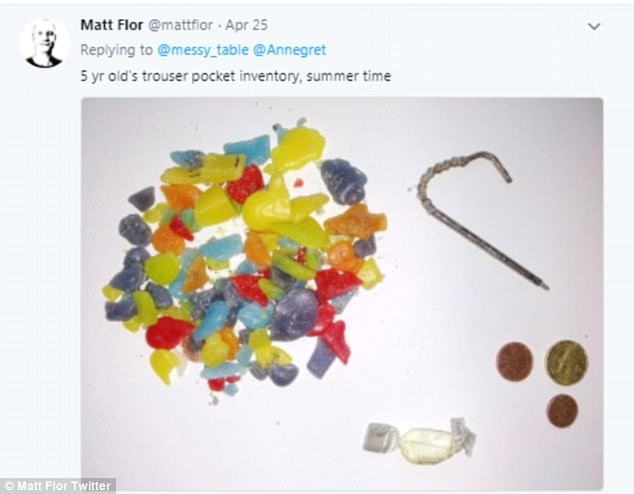 One follower showed off his 5-year-old son’s pocket of coins, coloured pebbles and a sweet