Spoilers ahead for the Season 4 premiere of The Affair. Since debuting on Showtime in 2014, The Affair has captivated fans with its riveting Rashomon effect: The story is told through the perspective of each of the main characters, and inevitably, those perspectives don’t always line up. Season 1 told the stories of Noah and Alison, the two people who embarked on the titular affair. In Season 2, the points of view of their respective exes, Helen and Cole, were added to the mix. The varying angles of the tale are dizzying, but the drama flows out of these subtle differences. And when it comes to figuring out the "true" story, showrunner Sarah Treem tells Bustle that more than ever, the truth in Season 4 of The Affair is "in the eye of the beholder."

"I don’t believe in such a thing as a true story in these circumstances," Treem says. Because of this, the process of creating The Affair is only about getting into the characters’ heads, not about figuring out their objective reality. "It’s not as if we have a third narrative that’s the truth and then screw it up from there," she explains. "As writers, we put ourselves into Helen’s head and then take ourselves and out and think, okay, how would Noah see this scene? And that’s how we write it."

And the idea of the characters’ reality has only gotten blurrier since the show began. "There were definitely elements in the first season where the characters were were purposely holding information, so obviously there was a truth that they weren’t entirely revealing," Treem says. By now, though, she’s immersed in their points of view. She points to a scene featuring Noah and Helen in a Mexican restaurant in the Season 4 premiere: "I don’t believe in a [single] truth, in that scene. I believe that the truth is in the eye of the beholder. It’s a subjective experience."

The scene she refers to occurs — like most scenes in The Affair — twice: first from Noah’s perspective, and then from Helen’s. Noah sees his wife as distant toward him and overly pushy toward Trevor, seemingly trying to out him as gay right there over the guacamole. For Helen’s part, she sees Noah as self-involved, oblivious to what’s going on with the children or the effect he’s having on them or anyone else. The effect of these nuances is clear: The repercussions of their miscommunication are going to be felt far beyond this one interaction. And Treem didn’t want viewers to miss the significance; during the episode, she tweeted, "The bathroom scene IS the episode so watch carefully."

The Season 4 premiere lays the groundwork for Noah and Helen’s very subjective experiences of the same new city, Los Angeles, which will play an important role in the rest of the season. Treem explains that even though both characters are in the same place, the city represents different types of new beginnings for each of them. "One of the maxims that we were using on The Affair this year is that idea of ‘anywhere you go, there you are.’ How your stuff comes with you, even when you try to outrun it."

Treem added that for Helen, a born-and-bred New Yorker, this move to California is a purposeful attempt to start a new life, but things aren’t going to fall into place all at once. "She’s trying to start anew, but New York is basically coming with Helen to California. They say it takes about two years to get comfortable in California, and I think Helen is definitely in this first adjustment phase." 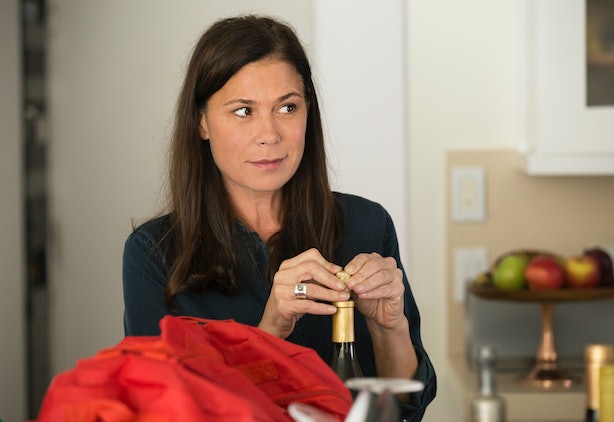 In contrast, Noah doesn’t seem to have the same baggage as his ex-wife. "Noah is a more migrant character in general than Helen, in my mind," says Treem. "He’s always been a bit of an outsider. I don’t know if Noah was ever as comfortable in New York as Helen, so I don’t think that California gives Noah the same agita that it does for Helen. I think he kind of likes it. It’s nice for him to have a change and a fresh start in a place where not everybody knows him, and he’s not as infamous as he’s become in New York and the Hamptons."

And when it comes to the core of The Affair‘s new season, Treem repeats the same idea Alison mentions in the trailer: forgiveness. "The characters kind of have to forgive themselves first in order to forgive each other, and some of them can and some of them can’t," she teases. "It’s been interesting to feel that out and to ask ourselves, well, what is forgiveness? And how does it actually happen?"

As The Affair winds toward its inevitable end (Treem says she’s hoping to make one more season after the fourth, but the network hasn’t made any announcements on the show’s future), Treem laments that she’s only just started to get the hang of showrunning. "I have a friend who told me that your job as the head of a creative collaboration that’s this large, with this many people, who are so talented, who are all trying to service the same story, is to basically figure out how to control the flow of the water, but to understand that you’re not the water yourself." It’s an apt metaphor for a show where the drama moves like so many ripples in the water, and the truth can be just as fluid.