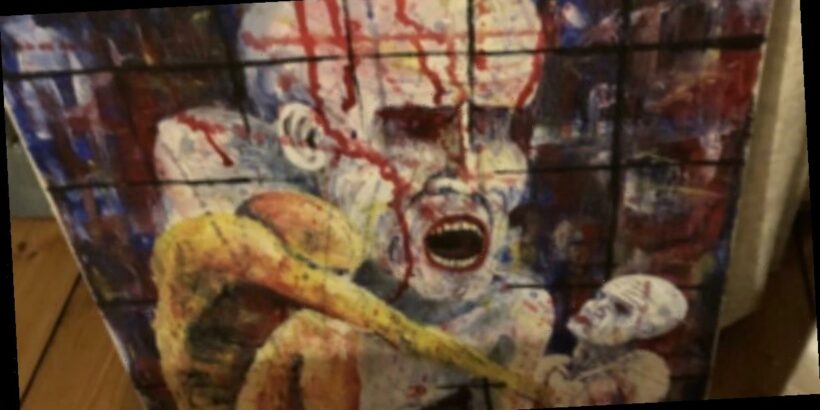 A woman who recently moved into a new flat with her partner was aghast when she found a “truly awful” painting left behind by the previous owner.

The anonymous person posted a photo on parenting forum Mumsnet to ask for advice about what to do with the artwork.

Other mums on the site were shocked by the horror-style image and suggested that the woman burn it rather than throwing it away as they worried it would “keep coming back”.

But, some suggested that burning the “nightmare” painting might “release the evil” it contained.

Would you keep this painting, sell it or burn it? Tell us in the comments…

Captioning the photo, she said: “Bought a lovely Victorian flat with my partner however the previous occupant left this truly awful painting.

“Am I being unreasonable to just throw it away?

“Partner seems to think we could sell it!

“I just want it gone as it’s giving me nightmares just looking at it.”

The painting shows three human-ish gothic figures with skeletal frames, no hair and blood streaks – plus, one had a gaping mouth with bared teeth.

“No matter how many times you sell that painting it will end up back on your wall in its place,” someone posted.

While another said: “I see why they left it!

“[Your partner] is right though, someone will buy it, the previous owners clearly did. It saves it going to landfill.

“Although maybe it belongs to the flat and that’s why they left.

“They’d tried to dispose of it several times but it kept turning back up mwahaaa!”

“I think you need to burn it or something – although, that might release the evil,” added another.

Other posters thought the painting reminded them of "Dante's inferno" while others thought it looked more like "handsome Squidward".

But, not everyone was so disgusted by the piece.

One art-fan said: “Sell it, definitely.

“Someone spent a long time painting that and it would be awful to throw it away.

“I quite like it, but I don't think the DCs would.”

“I think that you should sell it, it's good,” noted another. “It should go quickly.”

And a third added: “I actually quite like it, I'm a weirdo though.”

A couple even thought the painting could be worth some dosh – and suggested she check if it’s signed.

One mum said: “Get it checked. Could be worth a pretty penny.

While another added: “Of course, in six months time when you see it on Antiques Roadshow getting a stonking valuation, or in the news being auctioned for three and a half million quid you may be mildly upset.”

Others recommended contacting the previous owner or popping the painting on a free site so someone else could enjoy it.