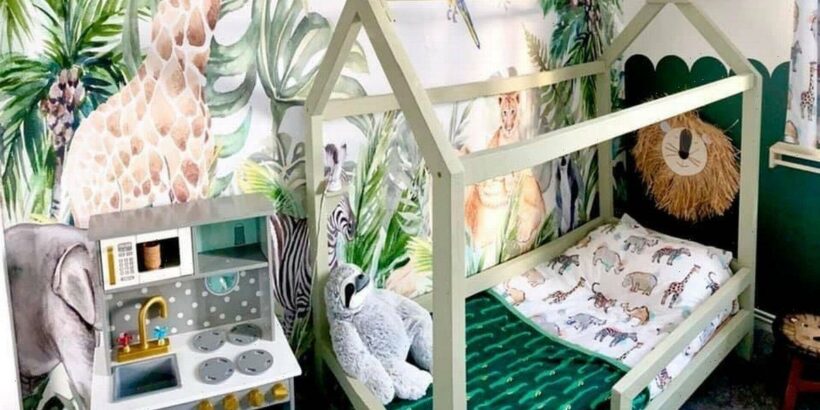 Many people decided to re-decorate their homes in lockdown with some DIY.

However, one mum managed to complete not just one, but four makeovers on a budget for herself and her children.

She decided embark on four projects – a bedroom revamp for herself, a new space for Lewis and a conversion of one room into two smaller ones for Maisie and Hugo.

And the housekeeper from Harrogate, North Yorkshire, spent less than £1,500 on all of it, with the help of some eBay bargains.

Speaking to money-saving community LatestDeals.co.uk, Emily said: "I got my ideas by collecting inspiration off home budget Instagram pages.

"They showed me where to buy cheap furniture and how to upcycle old items with Frenchic paint. I was able to put my own stamp on my home using bits and bobs I had collected over time."

She added: "We moved into a three bedroom house, so we halved the third bedroom in the back to give my one and nine year old children their own space.

"Our youngest accesses his bedroom from ours, so they both have privacy."

After her design research, Emily decided on her themes.

Her room would become a chic grey and white space, while eldest son Lewis would be getting a gamer-themed bedroom.

The third and final bedroom in the house would have two designs – Maisie getting a floral polka dot colour scheme and Hugo being treated to jungle decor.

Emily was mindful that she didn’t want to spend too much on the projects though.

She explained: "For my bedroom, I wanted to model it using some Instagram homes as inspiration.

"However, they weren’t in the budget for me if I was to buy everything as listed.

"Instead, I tried to recreate the look by purchasing supplies from Facebook Marketplace, B&M and Home Bargains."

Emily said that most of her supplies and furniture have been purchased second hand, from budget shops or sales where possible.

She also had help from a friend who is in the building trade to put up some stud walls and fit the electrics.

Talking about her bargains, she said: "We were lucky to pick up several items on the cheap.

"For example, I got wall stickers from eBay for between £3 and £5 a sheet, and while I was there I picked up a roll of wallpaper for just £10.

"Overall the walls of stickers in each room were just £30 each to create, and I also got some gamer cushions from this site for just £2 each."

She also saved on timber and plasterboard by going to a local builders merchants – paying £60 in total.

However, she said the best bargain was both of her eldest children's bed.

Emily commented: "We actually got those for free off Facebook Marketplace! The third bed was just £50 off Marketplace. I’ve had a lot of people asking where it’s from – I got lucky with that find.

"Marketplace turned out to be a great place for items on the cheap. I picked up a large stuffed giraffe for £45 and a pink chandelier for £20. There was a lovely hanging shelf with tassels that I got for just £5 and the grey lamps in my room cost just £25 for both. I also got my two mirrored bedside tables from Marketplace – £50 for both!"

All the smaller accessories in the bedrooms are also from either Home Bargains, B&M or The Range – which are known for their bargains.

In fact, Emily said she began buying things for the rooms before even moving into the home.

Talking about her biggest challenge, Emily said it was the walls.

She explained: "When we began renovating the rooms, the job which took the longest was preparing the walls.

"We hadn’t replastered anywhere except one wall, so it took a long time to sand everything and white mist the walls before getting the paint on."

However, she managed to achieve the amazing transformation in the end, whilst saving the pennies too.

The total cost for the four-bedroom DIY makeover came in at £1,466.