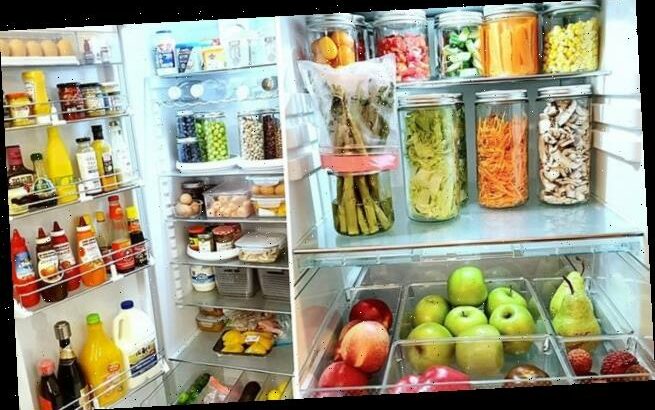 A mum has wowed online with her incredibly organised fridge using mason jars as a storage method, and she said it has hugely helped her with her New Year healthy eating goals.

The Australian woman called Natalie posted on Facebook, where she said she has been ‘trying something new’ for the past few weeks in her kitchen, with great results.

‘I’m trying healthier eating and being better organised,’ she wrote.

‘Every Sunday, I’ll be preparing salads, fruits and veggies, meats (and cooked rice, pasta and homemade dressings and sauces).’ 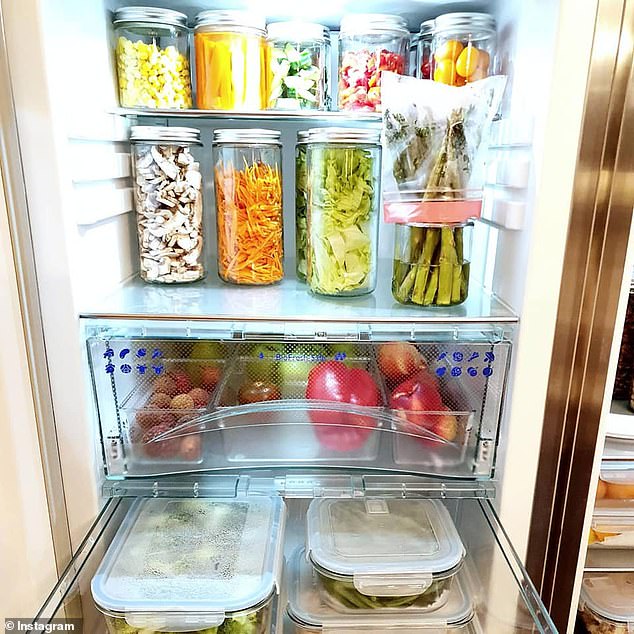 A mum wowed online with her incredibly organised fridge using mason jars as a storage method, and she said it has hugely helped with her New Year healthy eating goals (pictured)

Natalie added: ‘Everything is ready to be eaten and stored in Kmart mason jars, glass containers, organising bins and turntables.

‘It looks so pretty and had my 17-year-old son and hubby putting together their own customised salads for dinner last night, and our son also ate fruit for dessert.’

Thousands who saw the post and the well-organised fridge photos that accompanied it were impressed with the level of dedication, and said it looks more like a ‘pantry than a fridge’.

Natalie also uses lazy susans in her fridge, so she can access everything with ease. 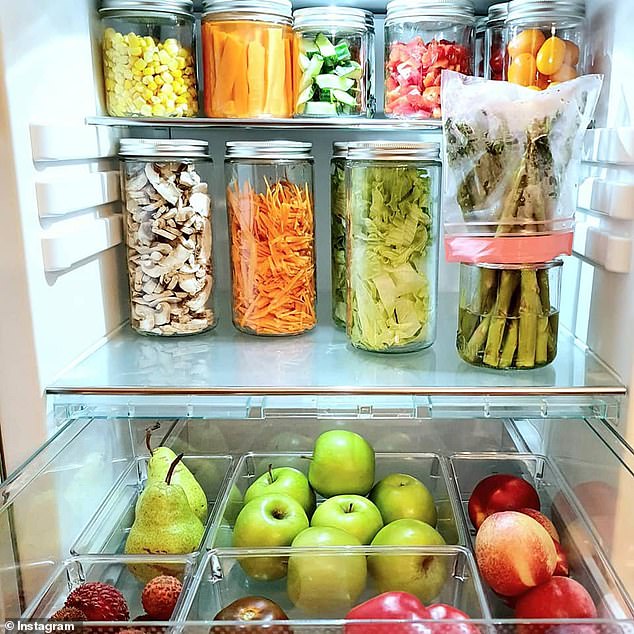 Natalie used Kmart mason jars in her fridge (pictured) alongside lazy susans, so that everything is easy to access

‘I love it! Looks beautiful, and all is on hand! But you’re gonna need to be a fridge nazi to keep it up I think!’ one woman wrote.

‘Looks amazing am definitely feeling inspired to do the same – thanks for sharing,’ another added.

Some highlighted that they have been doing similar things for years, and it hugely helps them with streamlining how much time it takes them to do their cooking.

‘Looks great, if you make a routine with things, it will stick’ one woman posted.

The mason jars at Kmart start from just $5 for a three-litre jar, and they go all the way up to $12 for a four-litre option. 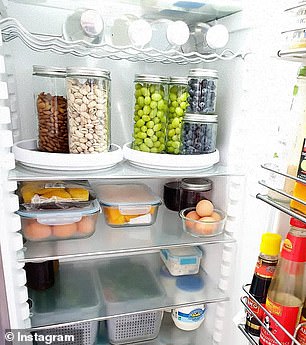 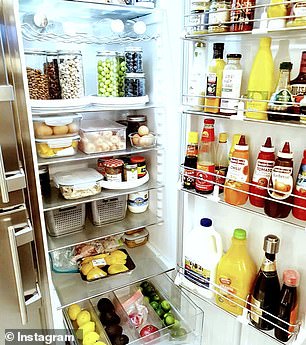 Many mums revealed they section their fridges into categories and use labels and budget containers to store food according to colour, type and/or family member (pictured)

What are the tricks for organising the fridge?

Section the fridge into categories

Make use of labelling the containers

Store snacks for children in one section only

Previously, a group of Australian mums shared their top tricks and tips for a perfectly organised fridge all year round after being asked for advice on Facebook.

Many revealed they section their fridges into categories and use labels and budget containers to store food according to colour, type and/or family member.

‘This is how I organise mine, it works for me! Just waiting on labels, I also have a chest freezer in my garage because this is way too small for my family,’ one mum said.

‘I keep my jars, bottles, sauces, etc in the veggie drawer and then have my fruit and vegetables in containers on a shelf,’ another woman said, adding: ‘It also stops me from forgetting about old [produce] hidden in the back of the drawer.’

A third woman suggested placing the bottles of milk in the fridge door rather than on the shelf to make room for containers or bowls.

Many also suggested buying cheap containers from Kmart to store the food in and organise the space easily.