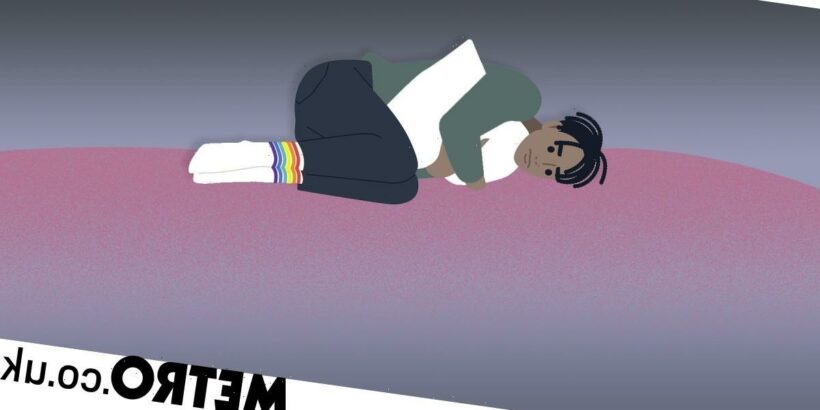 When I came out as a trans man, dropping a round robin into Facebook Messenger in September 2021, I wasn’t sure what to expect from certain family members.

With a few, I could envision the hovering question mark of their thoughts towards transness.

One or two of them I knew held bigoted opinions – including my stepfather. Though we loved each other, our relationship hadn’t been without its troubles in the 20 years I’d considered him my dad.

I’d been estranged from my biological father since he walked out on us when I was three.

Six years passed before Mum introduced me and my sister to our stepfather. Having missed that other loving presence at home, most of the time I felt lucky to have a supportive father figure at all, even if that support was shot through with emotional abuse.

My mum’s side of the family had always been small, and we’d already lost people to age and illness when she died in 2017. I think the strangeness of still being bound to this tiny family unit, along with the grief, affected him more than he dared admit.

Another stressor had been added since I’d started exploring my gender identity in 2020, trying non-binary on for size. While he hadn’t said anything about it, at least not to me, his silence gave me the feeling that he didn’t like where my self-expression was going.

The question with him was whether he’d make the effort to overcome prejudice for me.

He didn’t. In fact, when I came out as a trans man, he tried to avoid the issue altogether. His initial response to my coming-out message was dead air. When I next saw him in person, he behaved as though my identity shouldn’t change anything about how he treated me, calling me ‘she’ on at least two occasions and deadnaming me on my Christmas card.

After that day, I sent him a message calling him out for his behaviour, telling him that I would have forgiven honest mistakes, but his blatant use of my old name was unacceptable. ‘This is who I am,’ I wrote, ‘and I need you to recognise that’.

Once again his response was silence. But over three months later, slipped in with my young daughter’s birthday card, his reaction came in the form of a letter.

‘What the hell are you doing?’ This was the sentiment he used to sum up my newfound happiness in life. That I didn’t know what I was getting myself into, should have considered all this before I had my daughter. The implication was clear – according to him my coming out made me an irresponsible parent and, even if I’d known I was trans sooner, I’d have had no right to start a family.

Looking back I wonder if some of his kindness was out of possessiveness, a sense of entitlement to me, rather than love

He expressed disgust with the ways hormone replacement therapy would change my body and concern for my girl’s wellbeing. Yet he said he would always see her as his granddaughter.

This all tracks with how I knew him as a father. He was kind-hearted, but inconsiderate when the feelings of others got in the way of his own pride. Deeply caring, though emotionally repressed.

This made him an inconsistent parent, picking and choosing when and how he supported me. I had to buck up, get tough, if I was going to break through my anxious hang-ups to a worthwhile adulthood. It almost makes me laugh. Now I’m living as a man and standing up for my identity, it seems I’ve ‘toughened up’ too much for him.

Looking back I wonder if some of his kindness was out of possessiveness, a sense of entitlement to me, rather than love. He only wanted to cut me off after I confronted him about his disrespect of my gender identity, the first time I’d ever challenged his attitudes.

Believe me, there had been many other opportunities. Whenever he’d used racist or queerphobic language, or been in any way openly insular before, I’d put myself at a distance from it. I’m ashamed of doing this for my own comfort. Considering some of his abuse, I feared what he might be capable of.

His refusal to acknowledge me, not just as a man but as an adult with my own will, put into perspective how unconcerned he was about belittling others for his own ends. In my reply to his letter, I laid down that if he didn’t want to know about my transition, it was tantamount to saying he didn’t want to know me any longer.

I waited two weeks for his response. In the end I sent another message asking how he felt. Only then did he do me the courtesy of confirming that our relationship was over. After all that time and effort spent trying to wring answers out of him, I felt little more than hollow. There were the shadows of sorrow and anger, but by this point I’d known his disownment was all but inevitable.

He didn’t think there had been anything more to say. He didn’t seem to realise I was giving him openings to re-evaluate his behaviour.

Whatever his thought process, he turned his back on me because I was no longer his meek, pliant stepdaughter. He was giving me openings too – to submit to not being seen as myself in his company.

According to his letter, he’d felt for a while that I’d stopped thinking of him as my father.

Maybe his feelings, like mine, are that I didn’t love him enough to make this one sacrifice. Instead, he had the ignorance to believe he could cut right through me and still have my daughter as part of his family. My intelligent and sensitive child, who’s been told he didn’t want me for my true self, and accepts this as cruelty. If only it was so easy with everyone else.

When I was his daughter, I forgave him too much. I let him lay claim to me, intimidate me, make me feel guilty for my vulnerability. In the end, he had his own hand in making me strong enough to respect myself – my family – and let him walk out of my life.

This series aims to offer a nuanced look at familial estrangement.

Estrangement is not a one-size-fits-all situation, and we want to give voice to those who’ve been through it themselves.