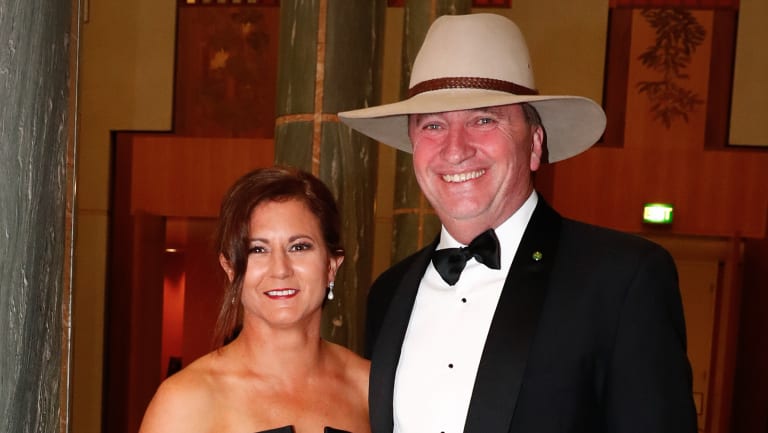 Barnaby Joyce with his estranged wife Natalie in happier times. The pair have now separated.

Good on Natalie Joyce for agreeing to be interviewed for July's Australian Women's Weekly (AWW). By her actions, she shows that women do not have to remain silent in order to be dignified.

When the whole nation has picked over her marriage and her family life, Ms Joyce’s courage, and her patience to set the record straight at a time of her choosing, is admirable.

I just wish she’d accepted payment for the interview. Sure, refusing payment does afford Natalie the moral high ground. But let’s face, she already had it. And Barnaby being Barnaby, she’s in no danger of losing it any time soon.

AWW will no doubt make a packet out of the interview so it’s only fair that this woman, like any woman, should be paid for her time and effort.

And given that Barnaby’s $150K for his “tell all” interview that didn’t tell us much at all, is going to a trust fund for his son, it seems reasonable that Barnaby and Natalie’s four daughters also receive some financial compensation for the hell their father has put them through.

The only downside of Ms Joyce’s interview, at least in how it’s being framed by the Women’s Weekly, is that they’ve managed to make Vikki Campion the villain, while Barnaby walks away with diminished responsibility.

According to the Women’s Weekly, Ms Joyce describes Vikki Campion as the woman who “destroyed her family and stole her life”.

I’m not saying that Vikki Campion is blameless in all the pain that has been caused to the Joyce women. But Vikki didn’t break Natalie’s marriage vows. Barnaby did. Barnaby took the lead in deceiving his wife. Barnaby is the one who should be blamed for the embarrassment and humiliation that Natalie and her daughters have suffered.

There’s no doubt the “other woman” narrative sells magazines. We all love to hate the “other woman”, who slides in between the sheets of an otherwise happy marriage with her come-hither eyes and her matching bra and undies that haven’t been stretched and discoloured from being washed with the kids’ football jerseys.

But the “other woman” angle has the effect of letting Barnaby off the hook. According to the AWW , “[Natalie] now believes [Barnaby] is on the brink of an inevitable breakdown". While Vikki Campion is portrayed as the home wrecker, Barnaby appears as not fully responsible for his actions.

Not being himself, or being driven to it by factors outside his control, is another go-to excuse women afford men who act badly. 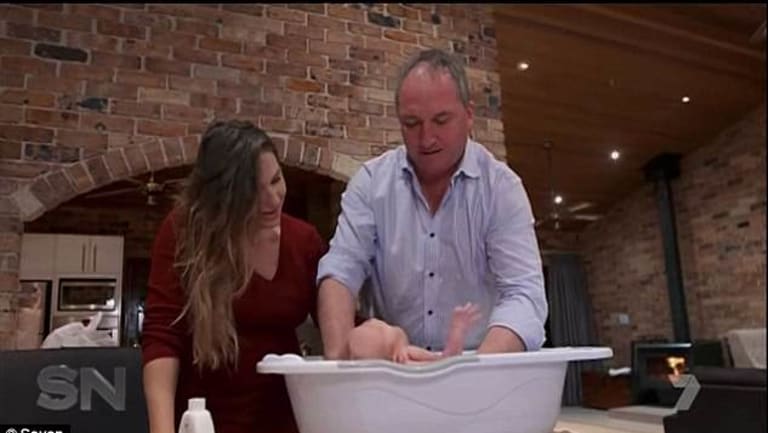 Joyce and partner Campion giving their son Sebastian a bath on Sunday Night.

Still, you can understand Ms Joyce’s point of view. It’s not surprising that Natalie would prefer to blame Vikki for her broken marriage and misery rather than her husband. If it was the “other woman” rather than your own husband, then the betrayal is not so great. Perhaps all those years you committed to him weren’t a lie. You did marry a good man, if only that woman didn’t come along and steal him away.

It hurts less to tell ourselves that he’s just not himself right now. That the real man we fell in love with and married would never have hurt us and our children in such a way.

But, isn’t this another way of blaming women for the bad behaviour or men? It plays into the stereotype that women are solely responsible for starting, maintaining and finishing relationships.

I have the deepest sympathy for Natalie Joyce and her daughters, but here’s the awful, horrendous truth of the matter. There is no person (or emotional state) Natalie can reasonably blame for Barnaby’s betrayal except for Barnaby.

Barnaby is an adult and is responsible for his own behaviour. If we once thought him capable of being our deputy prime minster than we must also assume that he was capable enough to keep his pants on.