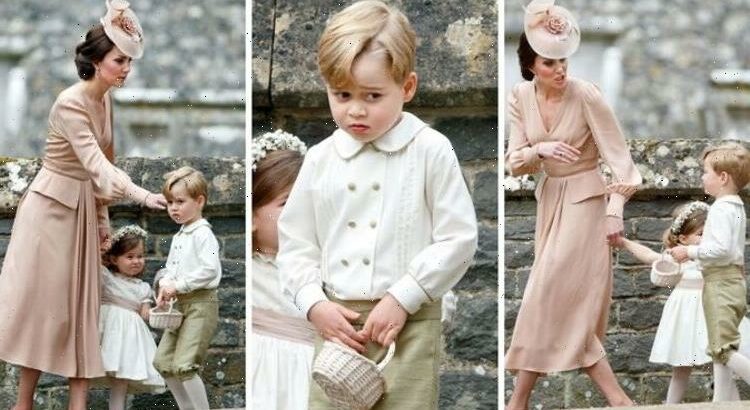 Civilian weddings can be stressful occasions, let alone royal ones. Body language expert Judi James spoke to Express.co.uk about Kate Middleton and Prince George’s relationship dynamic at Pippa Middleton’s wedding. What kind of mum is the Duchess of Cambridge?

When Pippa Middleton married James Matthews in May 2017, Prince George was just under four years old.

Kate was seen looking rather stern as she addressed a “naughty” moment from George.

Judi told Express.co.uk: “Kate’s body language fluctuations as she responds to what appears to have been a rather naughty moment from George could give a guide to her parenting style.

“As she tells her son off, her facial expression is clearly firm enough to show she means what she is saying and her eye contact suggests she is going to track the changes he makes.”

Judi added: “It would have been easy to look distracted and busy as she takes charge of the bridal party but this moment of focus would add emphasis to her point.”

Kate was not Maid of Honour at her sister’s wedding due to the position being reserved for single women.

It was also imperative that Kate didn’t inadvertently steal the spotlight on her younger sister’s big day.

Royal expert Judy Wade predicted at the time: “Kate would upstage her sister.

“It’s a tricky situation for Pippa. She would want her sister by her side, as who else would she trust to make things go well?

“But if your sister is a future queen, she is going to upstage the bride and draw attention.”

She concluded: “Kate would want to be in the background as much as possible.”

With this in mind, the last thing the Duchess would have wanted was an all-eyes-on-us showdown between her and her son.

She dissipated the tension, with Judi observing that the situation was “low drama”.

Judi explained: “As she speaks to George, little Charlotte, who she is holding by one hand, looks relaxed and inattentive.

“If one child gets told off and there is a sense of escalating drama or maybe tantrums on the cards, other children will often become an audience.”

Kate’s response to misbehaviour is as loving as it is strict.

Judi said: “Kate’s expression changes quickly as she seems to stretch an arm out to perhaps reward George for any change in behaviour.”

Much like mother-in-law Princess Diana, Kate has a gentle and tactile approach to her children.

The body language expert concluded: “Her softer, warmer facial expression could be just as motivational as her sterner look.”