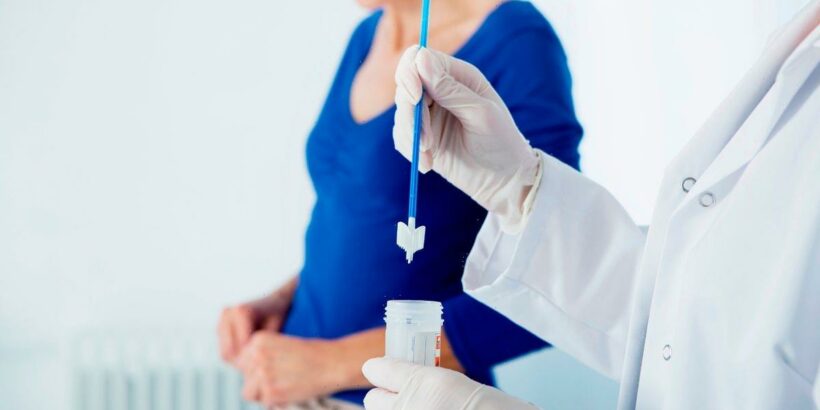 Around 3,000 new cases of cervical cancer are reported in the UK every year but many women avoid booking their test.

At the end of December last year, 32.9 percent of women and people with a cervix aged 25 to 49 were not up to date with their cervical screening, NHS data has found.

While 25.5 percent of those aged 50 to 64 were also behind, despite approximately 99.8 percent of cervical cancer cases being preventable.

Cervical Screening Awareness Week, an annual campaign led by Jo’s Cervical Cancer Trust from 20 to 26 June 2022, urges those eligible to get their tests booked.

Screening coverage for those aged 25 to 49, who should be tested every three years, revealed that 3.5 million women across England were not up to date with the vital health check at the end of last year.

Meanwhile, more than 1.3 million of those aged 50 to 64 were unchecked at the end of December – despite patients in this age group eligible for screening every five years.

Areas in London have the lowest take up of tests, with three in five of those eligible in the City of London not up to date with their screening.

Only 41.7 percent of those eligible in Kensington and Chelsea have attended tests, while figures from Westminster revealed just 42.9 percent are up to date.

Want to get the latest health news direct to your inbox? Sign up for the Mirror Health newsletter HERE

Samantha Dixon, chief executive of Jo’s Cervical Cancer Trust, said: “Cervical screening is vitally important – it can help to stop cancer before it starts, saving lives. Yet in some parts of the country, as few as one in two women and people with a cervix don’t attend cervical screening when invited.

“This can be for a number of reasons. Some aren’t able to find an appointment that fits around work commitments, while some feel anxious or embarrassed. Others may have experienced sexual violence, or are living with endometriosis, menopause or vaginismus.

“This #CervicalScreeningAwarenessWeek, we’re talking about the importance of attending your cervical screening – and a huge part of this is helping everyone to feel supported and included in the process.”

Rates of women aged 25 to 49 attending screenings improved in March 2020, when 70.2 percent of those in this age group had been tested.

However, screening appointments have declined since a high of 74 percent in March 2010 – a peak following the death of Jade Goody from cervical cancer in March 2009.

Invitations for cervical screening were suspended in April 2020 due to the Covid-19 pandemic and resumed from June 2020.

While those with symptoms or previous history were still seen, checks were put on hold for those who were lower risk.

Cervical screening looks for the human papillomavirus (HPV) which can cause abnormal cells on the cervix.

If high risk types of HPV are found during screening, the sample of cells is then checked for abnormal changes. If abnormal cells are not treated, they may turn into cervical cancer.

Many women avoid smear tests due to feelings of embarrassment and concerns about being hurt.

This Morning’s Dr Philippa Kaye has revealed the top tips for a more comfortable screening experience – such as scheduling the appointment around your period, requesting a woman doctor or nurse, requesting a smaller speculum, and wearing comfy clothes.

According to the NHS, the main symptoms of cervical cancer include:

If you have experienced any of these symptoms, it is important to consult your GP.