‘SOUPer creepy!’ Neighbor asks anonymous stranger to stop sending soup and addressing it to ‘my perfect little soup boy’ – and Twitter can’t get enough of the bizarre story

A bizarre interaction between two neighbors has sparked a hilarious conversation on Twitter about soup.

The soup debate started after comedian Hannah Solow from New York revealed someone in her neighborhood complained on a messaging board about how they keep receiving soup from an anonymous person.

‘Someone keeps delivering soup to my house with a note that says “soup for my perfect little soup boy,”‘ the complaint read. ‘I appreciate the free food but I don’t like soup. Please stop.’ 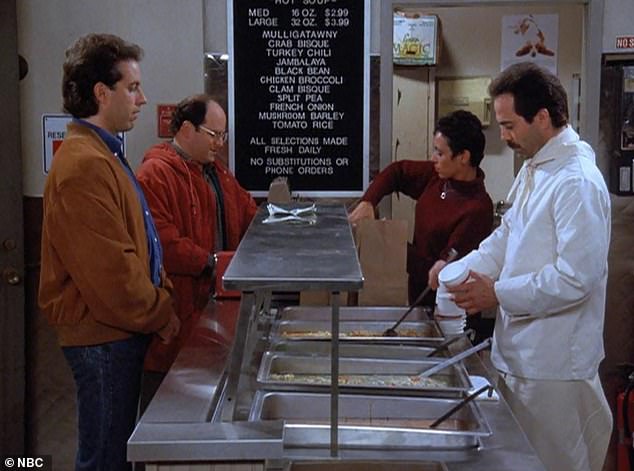 Bizarre: Twitter has started a soup debate after a story of someone getting sent soup for free addressed to ‘my perfect little soup boy’. Pictured is the Soup Nazi episode from Seinfeld 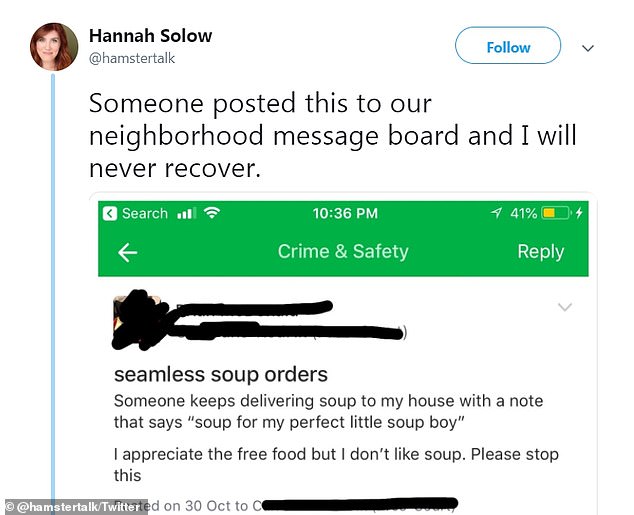 Incredible: Comedian Hannah Solow first revealed the story on Twitter after she saw a post on her neighborhood messaging board

Real talk: One person wondered if it was bizarre that the soup receiver didn’t actually like the hot entree

Thoughts? The conversation sparked a debate on people who don’t like soup

Hannah shared the complaint in a tweet on Wednesday saying she will ‘never recover’ from seeing it on the neighborhood’s messaging board.

But this sparked a conversation online about how weird it was that Hannah’s neighbor was against receiving free soup even though it came with a strange note.

‘What is weirder – the note with the soup, or that this guy doesn’t like soup?’ One person inquired after Hannah shared the post.

And he wasn’t the only one who thought it was bizarre someone was against the hot entree.

Another person wrote: ‘Dear god what kind of animal doesn’t like soup?’

The bizarre story left people online wanting more details — such as the types of soup the person received, if they ever discovered the anonymous person and the nature of the note. 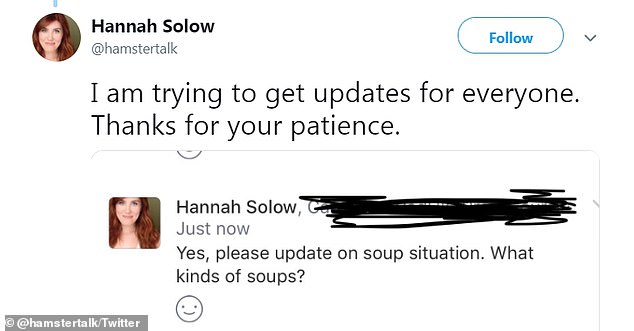 Priorities: Hannah later updated her followers saying she was trying to find out more information about the soup incident

Punny: Some people online had fun with puns when responding to the bizarre interaction

Glorious: Another person decided it was time to implement a soup pun into the conversation

Fair: The story left people wondering if the soup was a prank or if someone actually meant to send it to a specific person

‘I am trying to get updates for everyone,’ Hannah wrote hours later after the tweet garnered thousands of likes. ‘Thanks for your patience.’

She then showed followers how she commented on the post asking for an update from the soup receiver and if they would share the types they received from the stranger.

But so far there has been no response.

People had fun with the bizarre story online by posting their own soup puns and theories about the circumstances.

‘Souper creepy,’ one person hilariously wrote while another said, ‘I do believe we should all take a moment to bisque in this glorious pun.’

Hilarious: The story inspired someone to potentially send soup to their own friends

Funny: One person thought deeper on what the stranger should do next if they send another soup to the neighbor

Unapologetic: Hilariously, one person decided to change their Twitter name to the ‘perfect little soup boy’

One person was concerned about if the soup was actually intended for a real recipient and they just never received it.

‘That just makes me sad thinking someone meant to send those messages and soups to someone else but got the address wrong,’ they wrote.

The prank, if it was one, inspired other people to consider sending their own friends soup with funny notes like the one the neighbor received.

‘I’m broke as hell but all I want do now is send mysterious soup to my friends with these delightful notes,’ one person hilariously wrote.

It remains unclear if the neighbor has received more soup since the post.