After being largely MIA since the end of Dexter, Michael C. Hall is returning to TV in a new Netflix crime drama. On Friday, April 20, the trailer for Netflix’s Safe dropped and it shows the actor in a role that is way different than his former role as Dexter. His character seems to be on the other side of some crimes — and the background details from the show’s official description make Safe a thousand times more interesting than viewers could ever imagine.

Hall first garnered praise as David Fisher on HBO’s Six Feet Under, but achieved wider notoriety after starring on Dexter, the Showtime drama about a serial killer with a police department day-job.

Dexter aired for eight seasons, and Hall really nailed the conflicting duality of the show’s protagonist, Dexter Morgan. The role earned him a slew of high-profile awards, but he hasn’t really done a whole lot — aside from appearing as John F. Kennedy for one episode in the second season of The Crown — since Dexter ended in 2013.

Flash-forward five years later, and Hall is back on the crime-drama scene. And while it definitely appears as if murder may be involved in the plot of Safe — which airs on Netflix on May 10 — Hall’s return-starring role couldn’t be more different than the character he played on Dexter. Or so it seems.

Netflix released the trailer for Safe on April 20, and at first glance, it honestly just looks like a low-key redux of Taken. "This is a gated community," a voice clarifies at the beginning of the show’s trailer. "You can see who comes in, and who goes out."

Over the course of the next sixty-ish seconds, we learn that, one, the North Carolina-born Hall (as Tom Delaney) has assumed a British accent, and two, that his characters’ teenage daughter, Jenny (Amy James-Kelly), has gone missing — apparently after some sort of neon-lit rave?

We learn that Hall has some "suspicions," that "nine out of ten disappearances are connected to someone you know," and then it appears as if Hall takes it upon himself to do some investigating with an unknown man who tells him that what they’re doing is kind of like "being back in the army."

In addition to watching the trailer, you should definitely read the show’s full Netflix description, because the whole show starts to look a lot more interesting. While the trailer for Safe implies that the show revolves around Hall’s missing teenage daughter, the description reveals a surprising sub-plot. 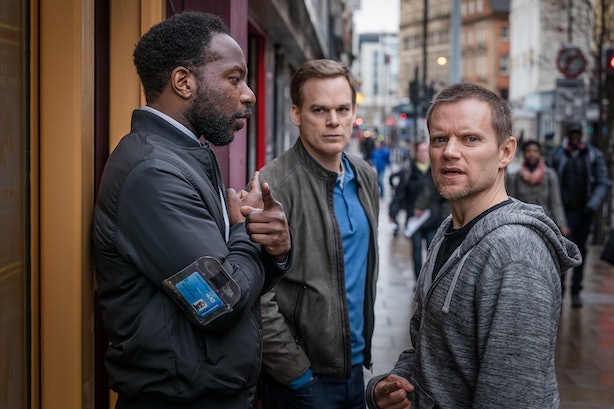 "Tom’s wife died a year ago and he’s bringing up his two daughters, living in a beautiful gated community, with close friends nearby and a new relationship starting," the description starts. "But when his eldest daughter disappears in mysterious circumstances he [realizes] that in fact he knows nothing about the people closest to him – dark secrets about the people he loves and the place where he lives."

So, yeah. Not a whole lot of new information there, but then it explains that, after his wife’s death and his daughter’s disappearance, "the guilt Tom feels is rooted in moral complexity – a mystery from the night of his wife’s death that will be revealed." Wait. What?

The trailer made no mention of Tom’s wife’s death — nor did it imply that it was somehow related to the disappearance of his daughter. And now they’re telling us that both incidents are connected? And someone they know was responsible? And it might all be Tom’s fault? What is happening? How is this the same show that the trailer portrayed?

It’s all very confusing, but also intriguing — and Safe could just be the next Netflix crime drama you need to add to your watch list.