Could this be KATE? Royal fans claim a sweet snap of a little girl with brown pigtails and a VERY serious expression is a never-before-seen photo of the future Duchess aged four in Jordan

Royal fans have claimed this sweet snap of a little girl in pink dungarees and pigtails is a never-before-seen photograph of a young Duchess of Cambridge.

According to an Instagram fan account dedicated to 36-year-old Kate, the picture was taken in Jordan, where the Middleton family spent three years in the early ’80s after the future Duchess’ father Michael, a British Airways manager, was relocated to Amman for work.

The user behind the Catherine Mountbatten Windsor fan account, which has 221,000 followers on Instagram, wrote: ‘I am almost sure that this is little Catherine as she really resembles her a lot. How cute is this!’

It’s been liked thousands of times by fellow admirers, many of whom said the girl in the picture – said to be a four-year-old Kate – also resembles the Duchess’ three-year-old daughter, Princess Charlotte.

One wrote underneath the snap: ‘That’s Kate alright!’

It is not known where the photograph was originally found, and the little girl’s identity has not been confirmed. 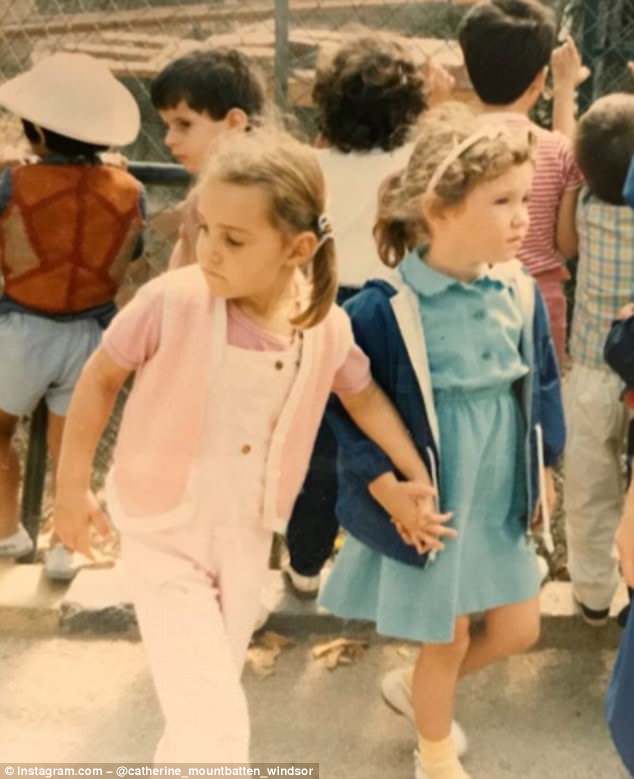 Future Duchess? A royal fan account on Instagram is claiming this snap is a never before seen photograph of a young Kate Middleton in Jordan (seen left in pink) The now Duchess of Cambridge is seen in Jordan at four with her father, Michael, and younger sister, Pippa, in this photo from the Middleton family album

The brown-haired little girl is seen holding hands with another young pal as they stride purposefully along in the snap.

One royal fan convinced she is a young Kate said her ‘body positioning gives it away!’

Others were swayed by the youngster’s resemblance to three-year-old Princess Charlotte.

A photo of Kate in Jordan aged four with her father Michael and younger sister Pippa that was previously shared by the Middleton family shows her with sunkissed brown shoulder-length hair.

An earlier snap of her on a family holiday to the Lake District shows her scrambling up a rock face sporting cute brown pigtails. Speculation: The image shared by a fan has been liked thousands of times on Instagram 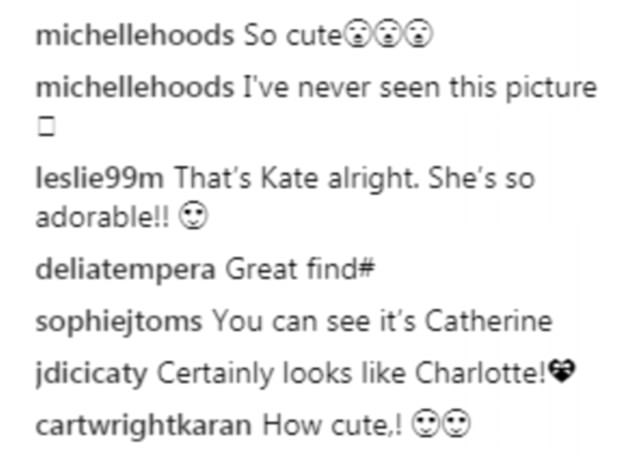 Royal fans are convinced the unidentified  snap shows the future Duchess as a child – and many say she looked just like her daughter, Princess Charlotte, does now 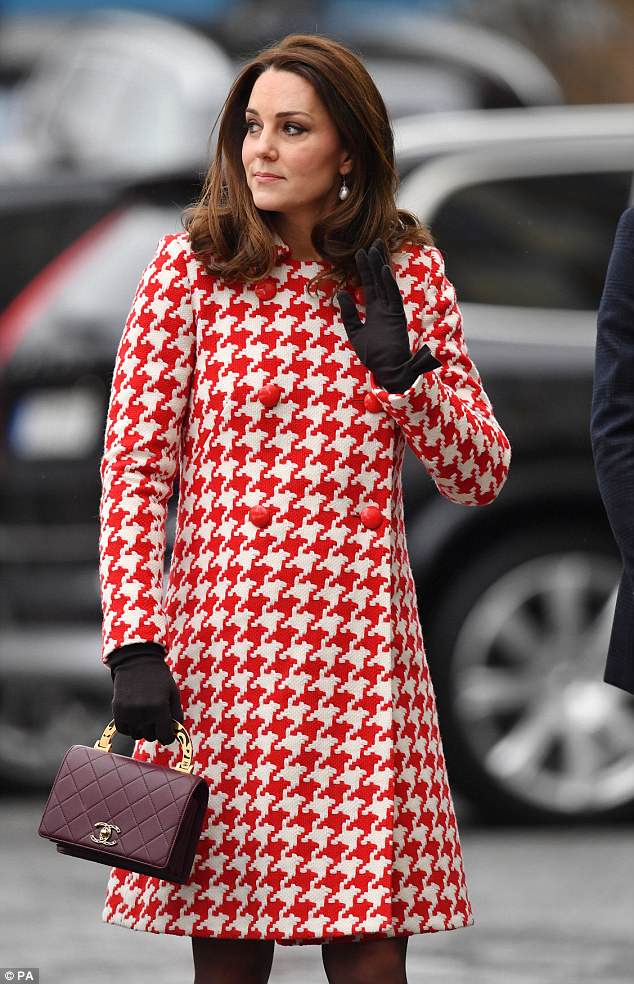 The now mother of three, seen in Sweden in January, lived in Jordan with her family for a short stint as a child

The Jordan photo has been back in the spotlight this week, as Kate’s husband Prince William made a visit to the exact same spot where his now wife played as a little girl.

The Duke of Cambridge is part way through an historic royal tour of Jordan, Israel and the Palestinian territories.

On Monday he visited the ruins of a Roman settlement at Jerash where Kate was photographed with her father Michael and sister Pippa as a child.

The Prince had told reporters his wife, who is on maternity leave after giving birth to the couple’s third child, Prince Louis, in April, was saddened to be missing out on the trip, as she had ‘really loved’ living in Jordan as a child. 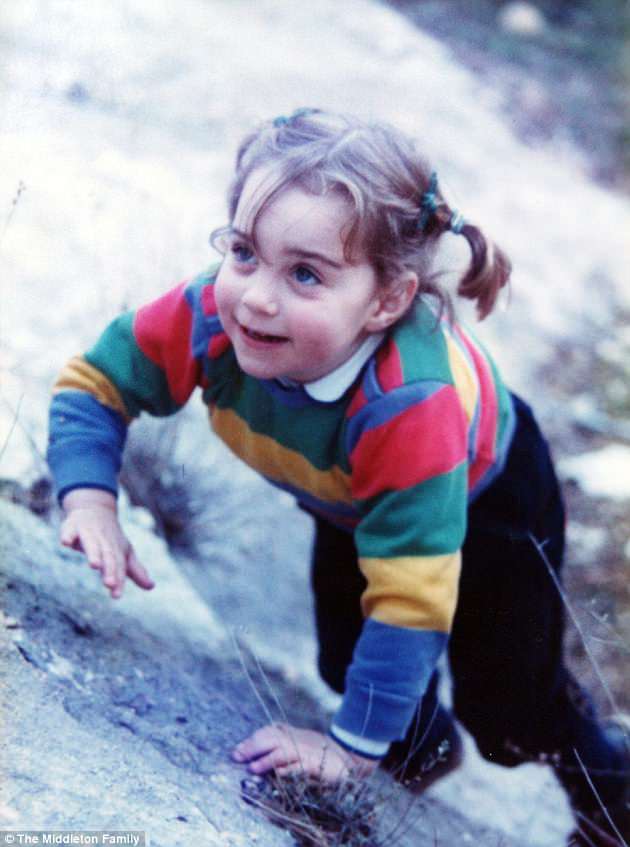 Kate, seen here on a holiday to the Lake District aged three and a half, has been seen sporting pigtails in photos from the Middleton family albums Some Kate fans said the little girl in the picture resembles the Duchess’ three-year-old daughter, Princess Charlotte, seen here with her mother at Harry and Meghan’s wedding last month 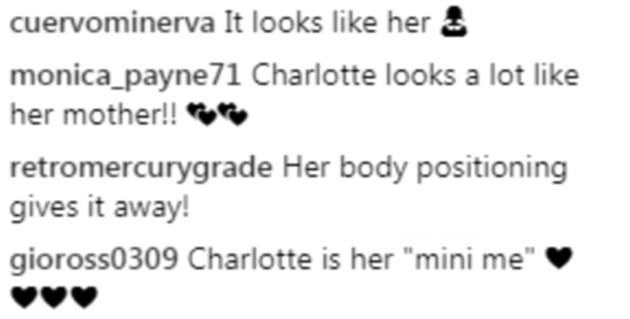 Fans were charmed by the photograph, having been persuaded of the girl’s identity by her resemblance to the Duke and Duchess of Cambridge’s daughter, Charlotte

Organisers of the Prince’s visit had placed a large picture of the Duchess of Cambridge as a child pictured with her father and younger sister some 30 years previously.

William, 36, was walking with Jordan’s Crown Prince Hussein, 23, when he spotted the large photo, a copy of which was released to the public just before the Cambridges married in 2011.

The second in line to the throne made a joke about his father-in-law, telling the Crown Prince: ‘Michael’s looking very smart in his flip-flops.’

He posed for a picture at the same spot, telling photographers: ‘We’ll have to bring the kids next time.’ 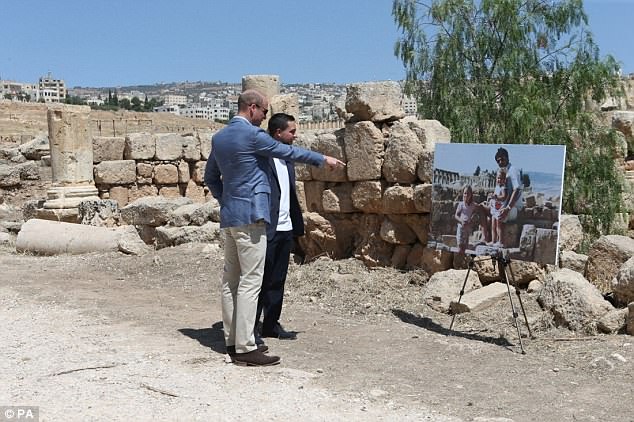 The Duke of Cambridge made a pit-stop at the archaeological site during his historic tour of Jordan, Israel, and the Palestinian territories