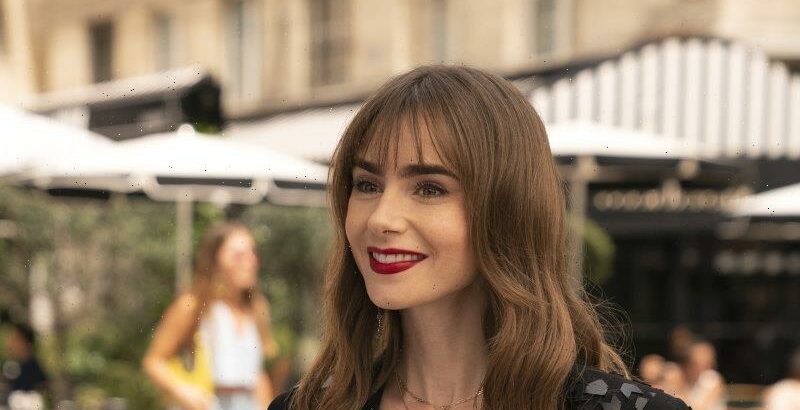 This year will be different. Or maybe it will be the same, but you will be different. In 2023, will you become the sort of person who wears silk scarves? Who does F45 or F46 or whatever vomit-inducing circuit training comes next? A person who keeps up with all the latest exhibitions? Who has opinions about important poems by tragic poets and can demonstrate those opinions around a dinner table stacked with imported cheeses? If betterment is our homework for this year, then the easiest blueprint to follow must be on TV.

TV has taught us that moving to a different city is an elite way to transform your life (it helps if it’s the kind of city that inspires you to make eccentric fashion decisions that would have you shunned in your old city). On television, the “mysterious new person comes to town” trope usually ends in, well, murder – except when it comes to Netflix’s Emily in Paris, a show where no one is mysterious, murder doesn’t exist and no one is quite sure if Emily should have come to town in the first place. 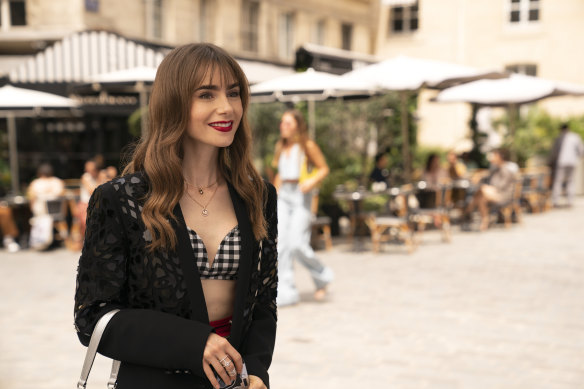 In Emily in Paris, Emily from Chicago spends her days prancing up and down cobblestones and annoying French people with her American peculiarities (like not being able to speak French).Credit:Stephanie Branchu/Netflix

Emily in Paris debuted in 2020 when we were all at our most vulnerable, which explains why a show that was universally mocked at first (remember when everyone realised that it was meant to be pronounced “Emily in Par-ee”?) suddenly became a sensation. Emily from Chicago spends her days prancing up and down cobblestones in very big belts, or very small hats, and annoying French people with her American peculiarities (like not being able to speak French). It was escapist, as richly decorated as strawberry-and-cream-topped mille-feuille, and, with the help of Sex and the City costume designer Patricia Field, features some of the kookiest fashion on television.

The third (yes!) season of Emily in Paris dropped on Netflix a couple of weeks ago, just in time for NYE fantasies about what our lives would be like if we, like Emily, did take that job transfer to Europe – though I’ve worked in social media and the most lucrative thing I was ever offered was free pens. Maybe if you moved to a glamorous European city you could be someone new, suddenly pull off shoulder pads, become more confident and more daring and fall in love with French chefs and British bankers! It sounds excessive, but perhaps being unashamed of excess is the lesson here. Embracing your most insufferable self is key!

It’s like Love Island meets The Bachelor meets the person who you went to school with who blames all their bad behaviour on Mercury rising.

Unfortunately, sometimes a change of locale isn’t enough to change yourself, particularly when you discover that you’ve still got the same personality you’ve always had, only now you have it in a different language. If moving your entire life in 2023 isn’t realistic, maybe transformation lies closer to home. Free-to-air TV has an abundance of programs that are designed to make you a better you. Perhaps Costa and the Gardening Australia team will teach you how to keep your limp lemon tree alive. Maybe The Block will encourage you to buy some lawn furniture, and a lawn (it’s easier than renovating). But perhaps the simplest place to start is in the kitchen. The year of cooking! The year of eating? 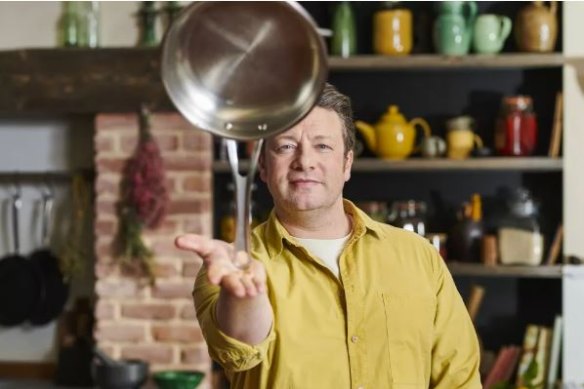 In his latest TV offering, Jamie Oliver challenges himself to cook meals in a single pan.

For more than 20 years, Jamie Oliver has been on our screens, piffing vegetables into pans and telling us how easy it is to cook while using British slang that I’m not entirely convinced is used by anyone else in the UK. Over the years, he has begun to see cooking as some sort of sport, so to make it more interesting for himself he has put limitations on it – first with Jamie’s 30-Minute Meals and then, when that was unfathomably easy for him, Jamie’s 15-Minutes Meals. On the surface, the time restraint is a way to acknowledge that modern families are busy and do not have time to make cranberry-stuffed cornish hens every night, though I suspect that cooking dinner has just gotten quite easy for Jamie and he yearns for a bit of a challenge.

His latest offering on Channel Ten is not Jamie’s Two-Minute Meals but Jamie’s One-Pan Wonders, because time means nothing but real estate is everything. So, what can you cook in one pan? Well, a lot of casseroles and pastas, as you might expect. But it’s hard not to get excited about the potential of cooking in one pot when Jamie yells things like, “That’s a pie in a pot!” and suddenly anything seems possible. His claim that at the end of the cooking you only need to clean one pot rings false to me, though. Cooking in one pot never really means cooking in one pot. There are always chopping boards and knives and tongs and small bowls and benchtops and testing forks to clean afterwards. Still, bless Jamie for trying to change us after all these years. 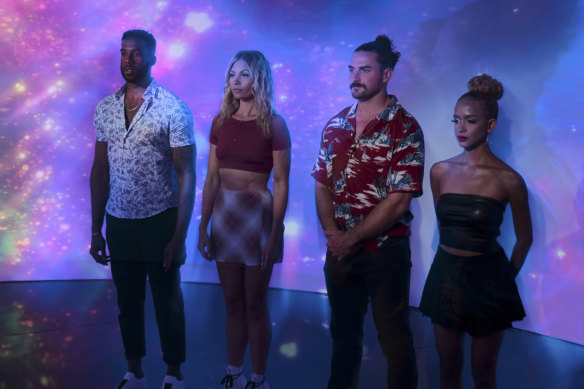 In Cosmic Love, singles discover if they are astrologically compatible.Credit:Amazon Prime

But if the New Year’s change you’re looking for is a change in relationship status (whether because you were driven mad by family asking “have you met someone?” over Christmas, or because the person you’re already with drove you mad over Christmas) perhaps you need to look to the stars. Not to the cast of Don’t Worry Darling, but the literal cosmos. Cosmic Love is an American reality dating show that premiered on Prime Video last year, with the French iteration dropping this month. It’s like Love Island meets The Bachelor meets the person who you went to school with who blames all their bad behaviour on Mercury rising. Four couples who represent zodiac signs are brought into a house, and a robot called the Astro Chamber invites a bunch of astrologically compatible (and coincidentally ripped) singles to the house to test their love compatibility. Even if you don’t believe that your next great love is written in the stars, at least you get to watch people say things like “Don’t mess with me, I’m a Leo!” and “I’m a Pisces, but I’m going to go with my gut here!” with such sincerity that it makes you wonder if you’ve ever felt anything that earnestly in your whole life.

This year Netflix will also air Wellmania, the adaptation of the Brigid Delaney book, starring Celeste Barber as a woman who is in pursuit of physical and mental wellness. Maybe it’ll be a roadmap of what not to do in 2023? I wonder how long it takes her to cook dinner.