A newborn who developed a tumour one and a half times bigger than herself has defied doctors expectations to survive.

Zalya Schier, now one, could have been aborted when her parents Lenai, 32, and Matt, 31, who live in Darwin, Australia, discovered the growth on her back.

Ultrasound scans showed he had a teratoma tumour weighting 3lb 4oz growing out of her body, but despite doctors suggesting her daughter could be stillborn, Lenai refused to have her pregnancy terminated.

Born by prematurely by caesarean section in July 2019, Zalya had to have a six hour surgery to remove the tumour, which was benign, and has since recovered at home with her family. 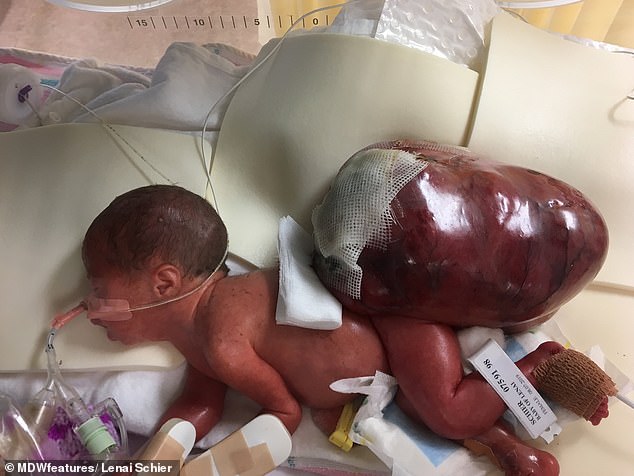 Zalya Schier, now one,developed a tumour one and a half times bigger than herself on her back when she was born in July 2019 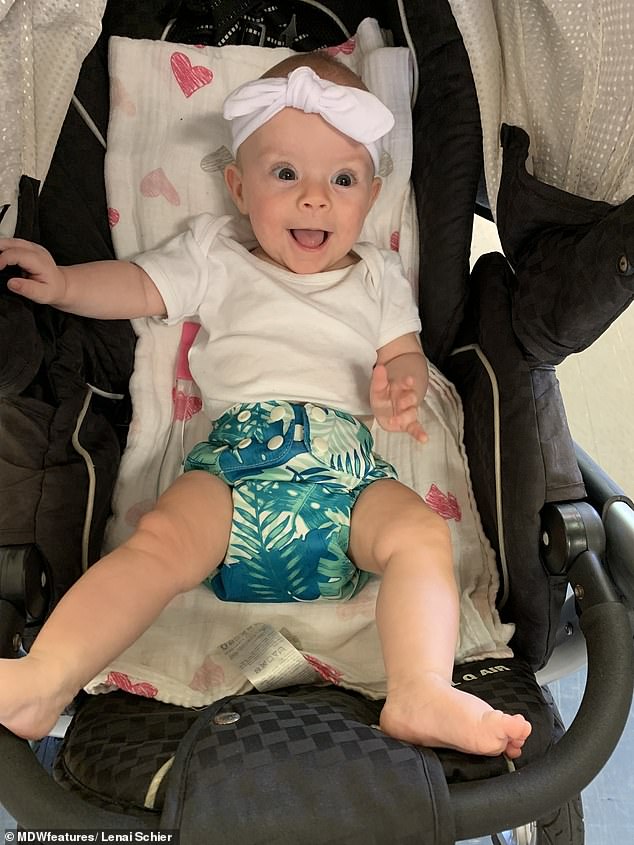 In July, Zalya had to have a six hour surgery to remove the tumour, which was benign, and has since recovered at home with her family. She is pictured after returning home five months after her surgery

Lenai, who also has son Wilder, two, was thrilled after discovering she was pregnant again, but began suffering with severe morning sickness up until she was 18 weeks pregnant.

At their 20-week scan in May 2019, Lenai and Matt were told that there was a mass growing from their baby’s tailbone.

Doctors weren’t sure what the lump was, but they speculated that it might indicate spina bifida.

‘The doctors told us not to google anything when they found the lump’, said Lenai.  ‘However, my husband and I did. 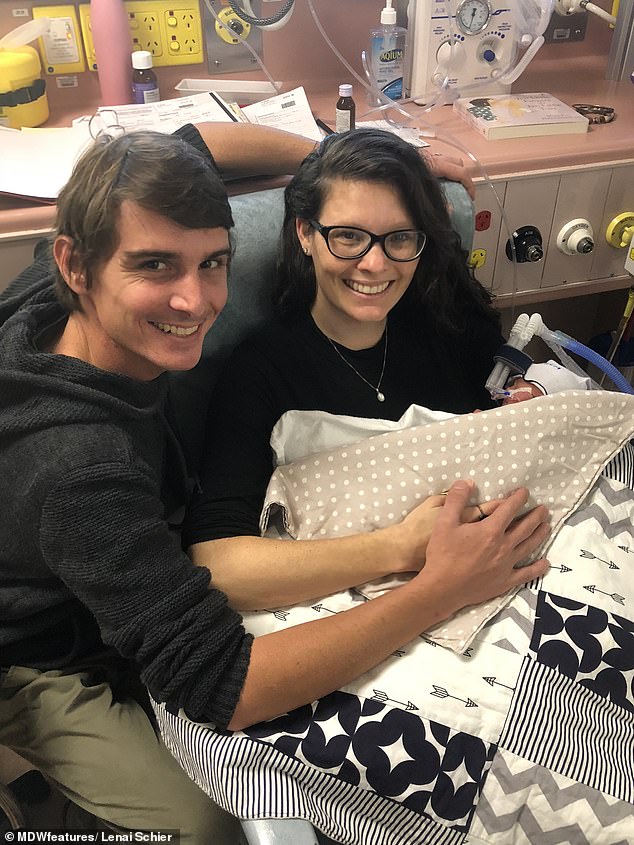 Despite doctors suggesting her daughter could be stillborn parents Lenai, 32, and Matt, 31, (both pictured holding Zayla for the first time) who live in Darwin, Australia refused to have her pregnancy terminated

‘The doctors said it could be several things. I don’t remember all of them but the one that stuck with me the most was spina bifida.

‘For those two days, all I could think was did this happen because I didn’t take my pregnancy vitamins every single day or not eat healthy enough? I was so scared our baby wouldn’t be able to walk or she would be in a lot of pain.’

Two days later, Lenai and Matt were told that their baby didn’t have spina bifida but sacrococcygeal teratoma (SCT) – a rare birth defect tumour that is located at the base of the coccyx.

Lenai started to research the condition as information from the doctors was limited and she was referred to a high-risk pregnancy team to be closely monitored for the remainder of her pregnancy.

Further ultrasound scans determined that Lenai’s baby had a type II tumour – mostly external but with a proportion inside the body – and it was already very large for 20 weeks. 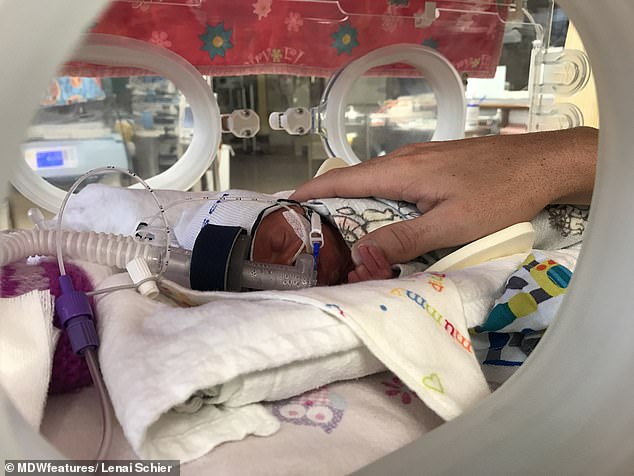 Born by prematurely at 28 weeks by caesarean section in July, Zalya had to have a six hour surgery to remove the tumour, she is pictured in the intensive care unit following her surgery 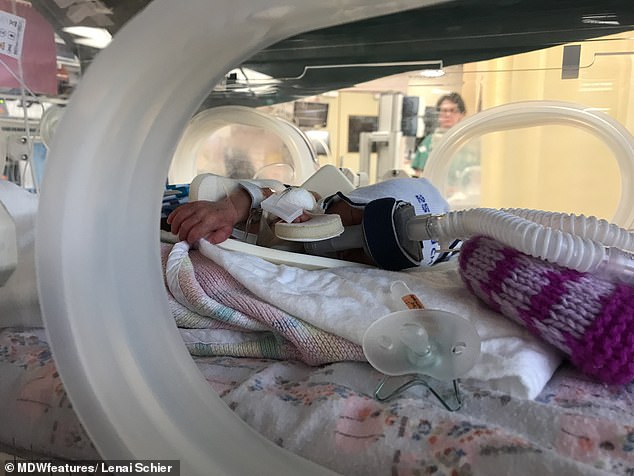 Zayla, pictured in an incubator in an ICU, received her gruelling surgery just days after her birth, in which she was revived several times and had five blood transfusions

Doctors warned Lenai and Matt that there was a large chance that their baby could be stillborn and they were offered a termination.

A foetal MRI showed that the tumour wasn’t affecting their baby’s organs and they decided to proceed with the pregnancy.

‘Even the doctor who called us didn’t know that much information. When we were in the room asking all the doctors by Skype how bad her SCT was, they did seem worried about how large it was. 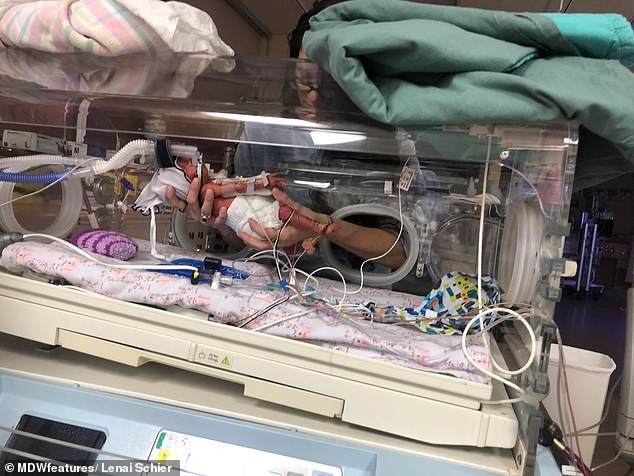 Doctors warned Lenai and Matt that there was a large chance that their baby could be stillborn and they were offered a termination, but refused. Zalya is pictured in the ICU following her surgery 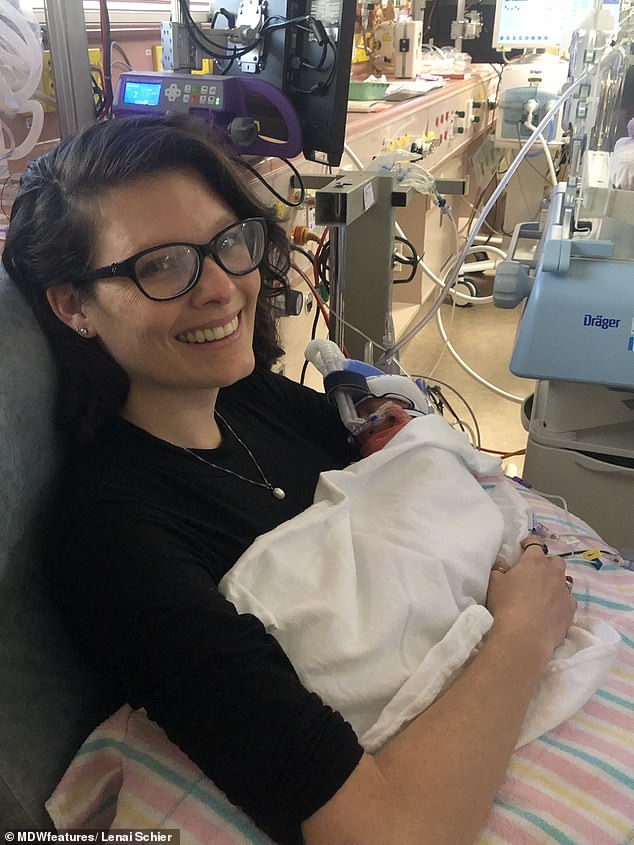 Lenai had to wait 10 days to hold Zalya in her arms as she was in NICU. After 57 days in hospital, they were discharged and after another five months

‘However, they were happy that it wasn’t affecting any of her organs at this time. When we were offered a termination, we both discussed that if she wouldn’t be in pain during her life that we would continue with the pregnancy.’

Lenai’s ultrasounds increased to two scans a week by 23-week – and by 26 weeks, their unborn baby had developed anaemia because the heart couldn’t handle the blood flow to the tumour.

WHAT IS A TERATOMA?

A teratoma is a tumour made up of germ cells which are formed while a person is developing in the womb.

Some 98 per cent of the tumours are benign, meaning they aren’t cancerous.

Because they are created from embryo cells which have the potential to turn into any type of human tissues, teratomas can contain fully formed teeth, hair, nails and skin.

They most commonly develop on the ovaries, testicles or tailbone, but can grow elsewhere in the body.

Teratomas growing from the tailbone are the most common type of tumour found in newborns and infants, although they are still rare, occurring in around one in 35-40,000 babies.

Symptoms of these can include constipation, problems urinating, abdominal pain, swelling and leg weakness.

Although not cancerous, large benign tumours can cause serious problems if they take up space inside the body and crush vital organs and blood vessels.

Most teratoma tumours can be removed with surgery when they are discovered. People with smaller tumours may not be diagnosed until adulthood.

The pair were sent to specialists in Adelaide to be even more closely monitored with three scans a week.

Lenai admitted that she found there was extremely limited information about the condition, and felt ‘depressed’ about her daughter’s diagnosis.

‘When I did my own research’, she told, ‘It was extremely difficult to get information on SCTs. I found out most of the basic things that they [the doctors] knew.

‘I definitely felt a bit depressed about it. You want to be healthy and have your baby grow big and healthy too, but I didn’t want this other thing inside me to grow.

‘Something that helped me the most was connecting with other women who were pregnant or who had already had their SCT babies.’

At 28 weeks, Lenai’s waters broke whilst she was in hospital Zalya was born on July 8, 2019, weighing 2lb 3oz, via c-section, under general anaesthetic.

Zalya’s tumour weighed 3lb 4oz which she underwent a six hour surgery to remove just days later, in which she was revived several times and had five blood transfusions.

Lenai had to wait 10 days to hold Zalya in her arms as she was in NICU. After 57 days in hospital, they were discharged and after another five months, they were allowed to go home to Darwin.

Luckily, Zalya’s tumour was benign so she doesn’t seem to have any long term damage to her organs and she’s now thriving.

‘When we got to hold her for the first time’, said Lenai ‘I just remember crying – both of us were. I was just in shock at how small she was and that the SCT was larger than her. We saw the SCT on the scans and they would always tell you how much bigger it grew.

‘Seeing it in person just made it so real. It was so good to see her but I was also absolutely terrified because we knew that she’d be going into surgery. We were just hoping for the best outcome in the end – that we’d be back to see our baby alive.’

Zalya had her coccyx bone removed to prevent the risk of the tumour returning and she is continually closely monitored with regular blood tests to ensure the tumour won’t come back. The risk of this is high until she reaches the age of five.

Although she can’t walk or crawl yet, Zalya has no trouble wiggling her way around the house chasing her brother. 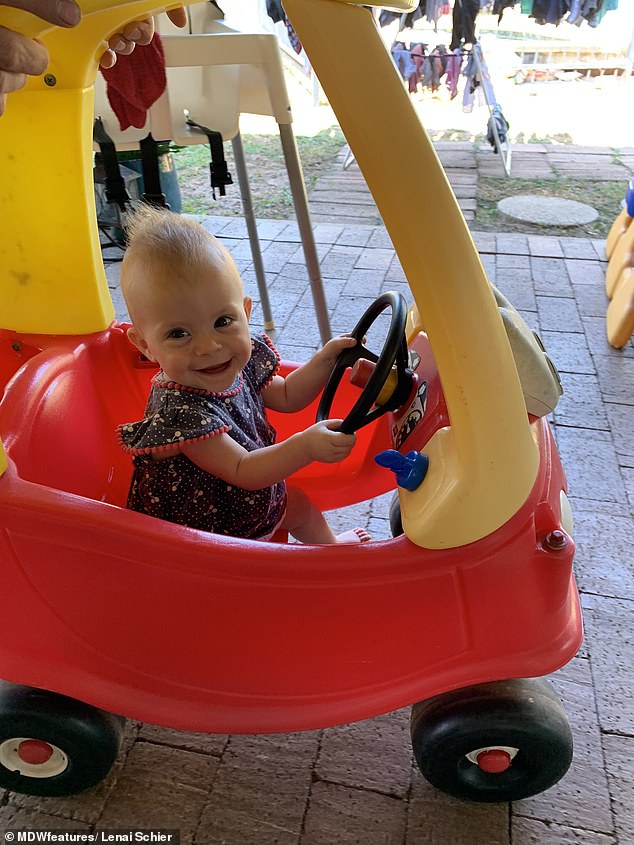 Luckily, Zalya’s tumour was benign so she doesn’t seem to have any long term damage to her organs and she’s now thriving at home with her family 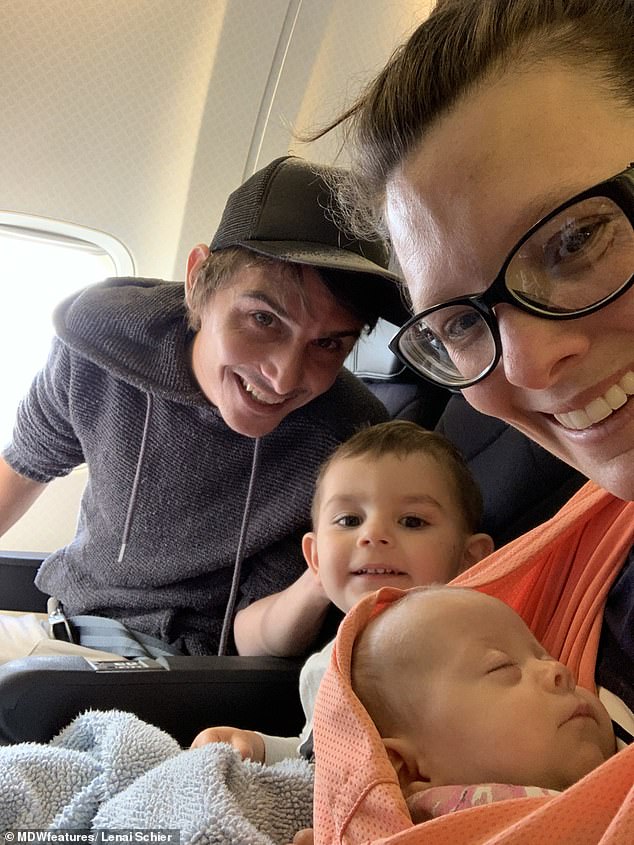 Although she can’t walk or crawl yet, Zalya has no trouble wiggling her way around the house chasing her brother Wilder, two (pictured with mother Lenai and father Matt after Zalya came home in for the first time) 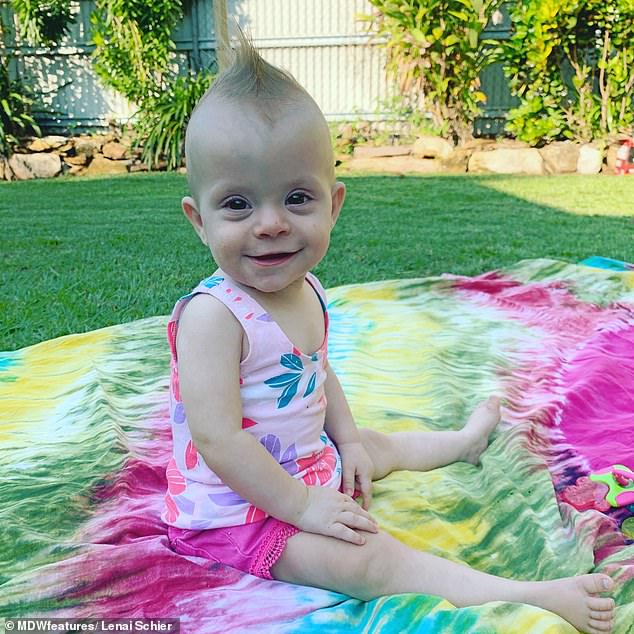 Zalya is now happy at home with her family, and Leina says that after being in hospital for so long, having her daughter home for the first time was ‘such a big deal’

‘Coming home was such a big deal, said Leina, ‘Zalya was in the hospital for so long. Finally, all of us would be together as a family in our own home with our cat and dog.

‘I feel like even though Zalya was already five months old when we came home, that it wasn’t until then that she started her life. At that moment, we were finally bringing our newborn baby home,’ said Lenai.’

Sharing her advice with other parents, she went on: ‘I just want her to be a happy and healthy baby. Someday, I hope that she will be able to talk with other survivors.

‘I’ve actually had several women get hold of me asking about my daughter’s story saying they are pregnant and their baby has been diagnosed with an SCT.

‘I know the feelings they are going through so I’m always willing to share her story.It’s helped me heal by sharing it and I’ve made and connected with others who were and have gone through the same thing.’