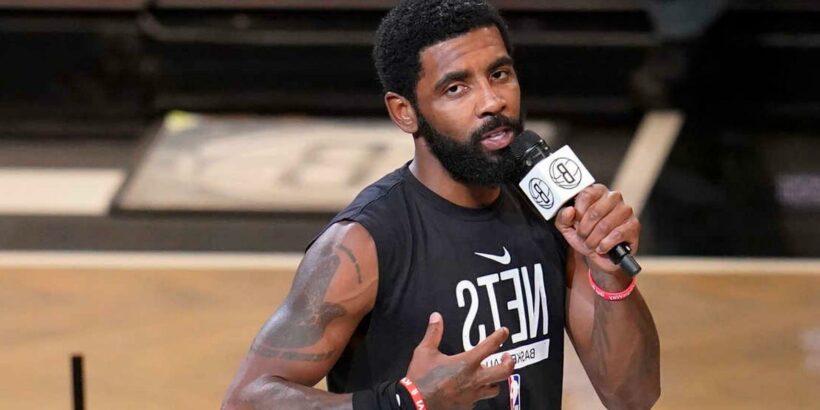 American multinational corporation that is engaged in the design, development, manufacturing, and worldwide marketing and sales of footwear, apparel, equipment, accessories, and services, Nike announced on Friday night that it has suspended its relationship with the Brooklyn Nets star effectively immediately. Nike also said it will no longer launch Irving’s new signature shoe, the Kyrie 8.

Nike also said it will no longer launch Irving’s new shoe, the Kyrie 8. The shoe, Irving’s eighth with the company, had been slated for a November 8 release.

RELATED: Kyrie Irving Reportedly Taking The Responsibility For Jewish Community, Will Donate Over $500,000

“At Nike, we believe there is no place for hate speech and we condemn any form of antisemitism,” Nike said in a prepared statement. “We are deeply saddened and disappointed by the situation and its impact on everyone,” per ESPN.

Irving’s deal with Nike was initially set to expire on Oct. 1, 2023. His signature line with Nike, which he has had since 2014, is one of Nike’s most lucrative current player series in recent years, behind only LeBron James’ signature series. Irving’s shoes are also among the most-worn across the league.

Irving, 30, was suspended by the Nets on Thursday night for at least five games without pay after failing to formally apologize for his post and failing to clarify whether he held antisemitic beliefs.

Irving apologized in an Instagram post later that night, writing in part: “To All Jewish families and Communities that are hurt and affected from my post, I am deeply sorry to have caused you pain and I apologize.”

On Friday evening, several players were wearing Kyrie-branded shoes. Going forward, it remains to be seen if Nike will request current endorsing athletes to halt wearing prior Kyrie sneakers in games altogether.

According to NBC Sports, Hours after he was suspended by the Nets, Irving finally issued an apology on Instagram.

“To all Jewish families and communities that are hurt and affected from my post, I am deeply sorry to have caused you pain, and I apologize,” Irving wrote on Instagram. “I initially reacted out of emotion to being unjustly labeled antisemitic, instead of focusing on the healing process of my Jewish brothers and sisters that were hurt from the hateful remarks made in the documentary.

“I want to clarify any confusion on where I stand fighting against antisemitism by apologizing for posting the documentary without context and a factual explanation outlining the specific beliefs in the documentary I agreed with and disagreed with. I had no intentions to disrespect any Jewish cultural history regarding the Holocaust or perpetuate any hate.”

Irving signed with Nike in 2011 after being selected No. 1 overall in the NBA draft by the Cleveland Cavaliers. He’s had a signature shoe line with the company since 2014.

As of Friday night, previous editions of Irving’s shoes were still available for purchase on Nike’s website.

READ NEXT: Kim Kardashian’s Hidden Hills Estate Back Onto The Market For $7 Million