Norway’s royal family don traditional costume to mark National Day – and even their dog Muffins has a patriotic ribbon!

Crown Prince Haakon and Crown Princess Mette-Marit, both 44, were joined by their children Princess Ingrid Alexandra, 14, and 12-year-old Prince Sverre Magnus to take in a colourful parade in Oslo.

Even the family dog, Muffins Krakebolle, took part in the festivities, sporting a patriotic ribbon for the special occasion.

Norway’s Constitution Day, held on May 17th each year, commemorates the signing of the constitution at Eidsvoll back in 1814. 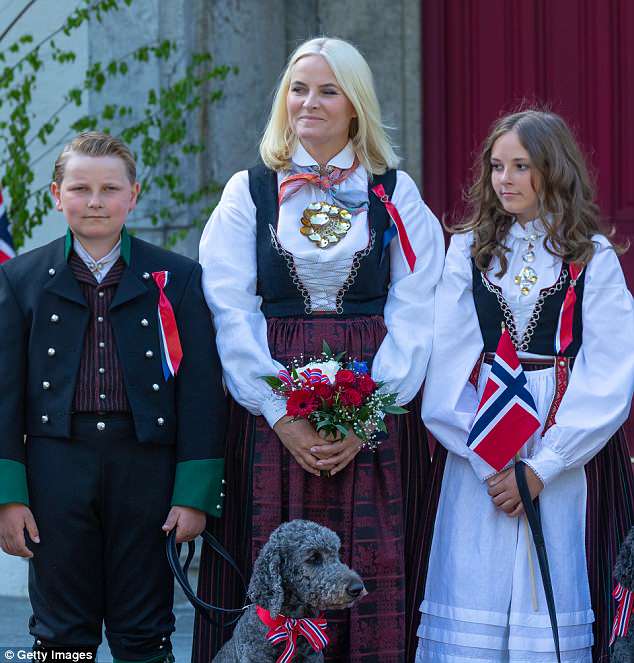 Norway’s Crown Prince Haakon, 44, and Crown Princess Mette-Marit, 44, put on a warm display as they watched the children’s parade at Skaugum, Asker on Norway’s National Day

Princess Mette Marit wore a checked skirt with a white blouse and a traditional lace up waistcoat.

She held a bunch of flowers and wore her blonde hair in a sleek centre parting as she posed between her children.

Meanwhile Princess Ingrid Alexandra wore a similar ensemble to her mother’s along with a white pinafore, and was snapped waving a Norwegian flag as she and her family waved to the gathered crowds.

Young Prince Sverre Magnus looked handsome in a smart coat, plus fours, knee socks and buckled shoes, as he and his sister guided the family dogs down the steps to wave to onlookers. 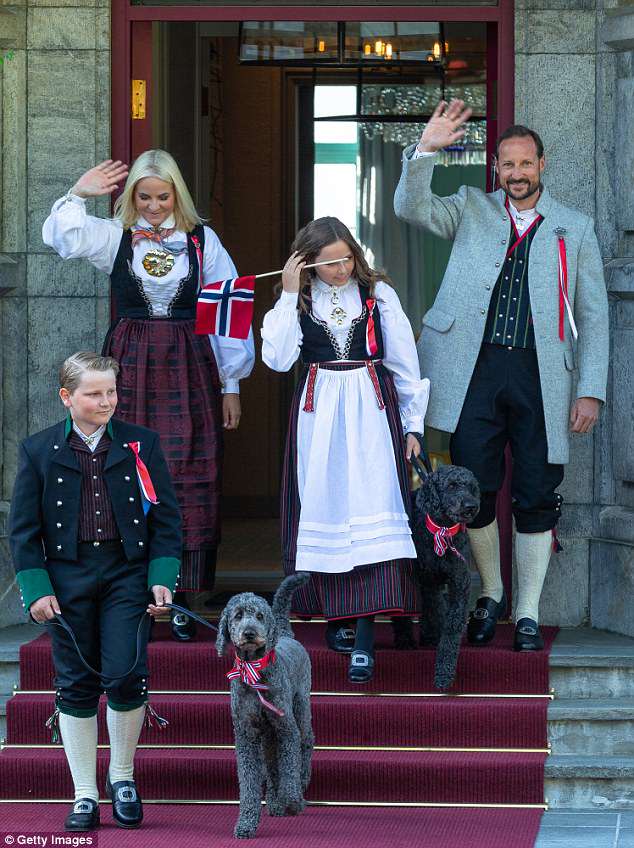 They were joined by their children Princess Ingrid Alexandra, 14, and son Prince Sverre Magnus, 12, as well as their sweet dog Muffins Krakebolle 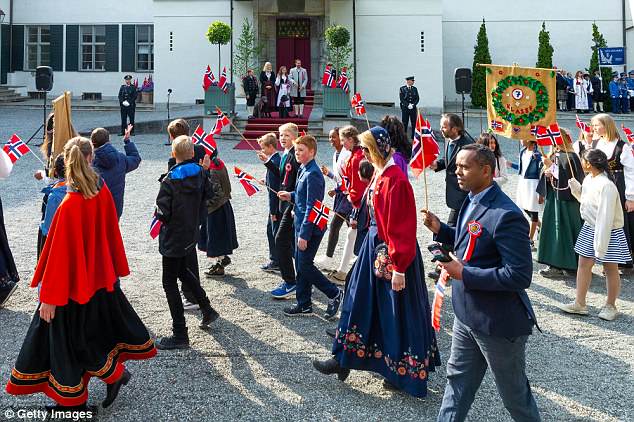 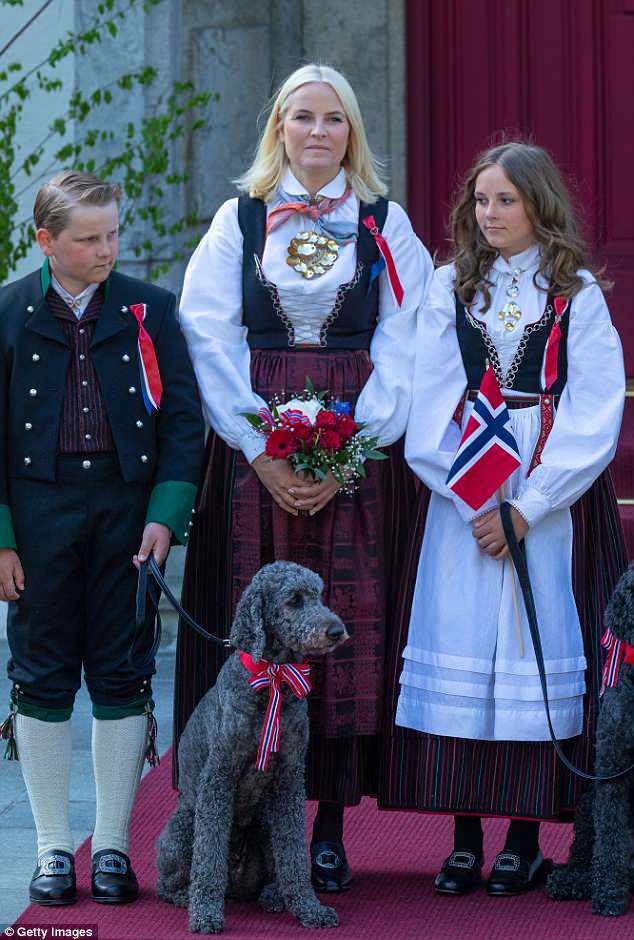 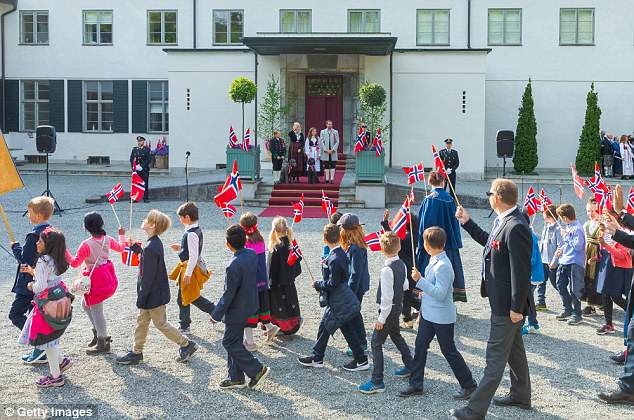 Seen: Children’s parade during the celebration of Norway’s National Day at Skaugum

Mette-Marit, a former waitress, met her future husband at a music festival in the 1990s when she was a single mother and married into the royal family in 2001.

The Crown Princess also has a son Marius, 21, from before her marriage to Crown Prince Haakon.

Earlier this year it was announced that he would formally step away from public life to pursue a degree in business studies at a university in California.

Over the years, his mother has become widely respected for her charity work and has been a special representative for UNAIDS, a branch of the UN that focuses on dealing with HIV and AIDS.

She also joined the Norwegian aid agency NORAD as an intern, and is a patron of several Norwegian charities, including the Oslo International Church Music Festival and the Norwegian Scouting Association 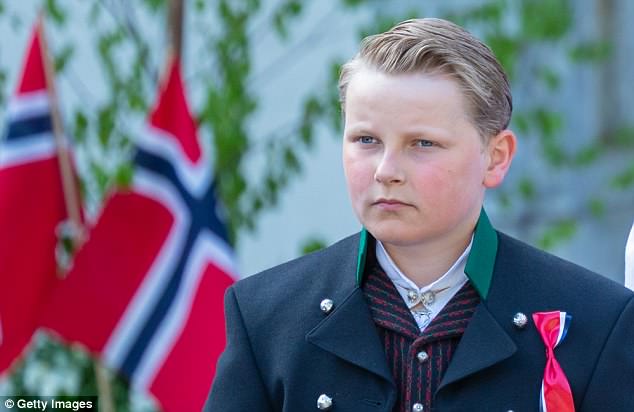 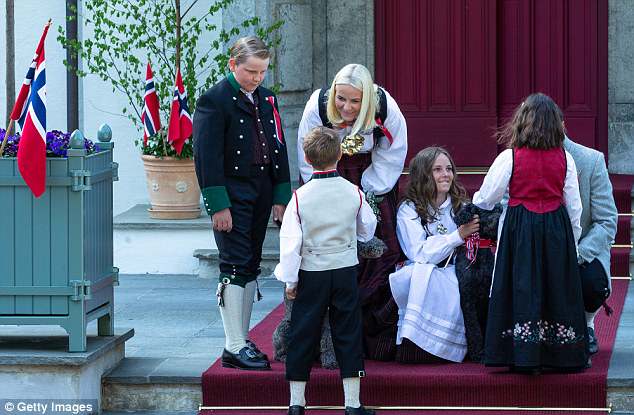 Mette-Marit, a former waitress, met her future husband at a music festival in the 1990s when she was a single mother and married into the royal family in 2001 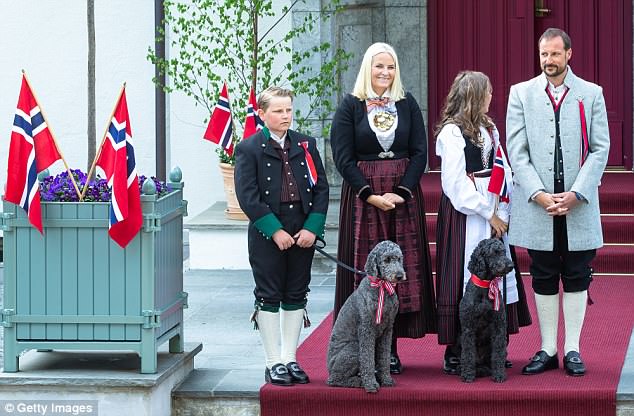 Prince Sverre Magnus looked handsome in a grey coat and striped waistcoat, his socks pulled up to his knees as he posed for pictures with his family